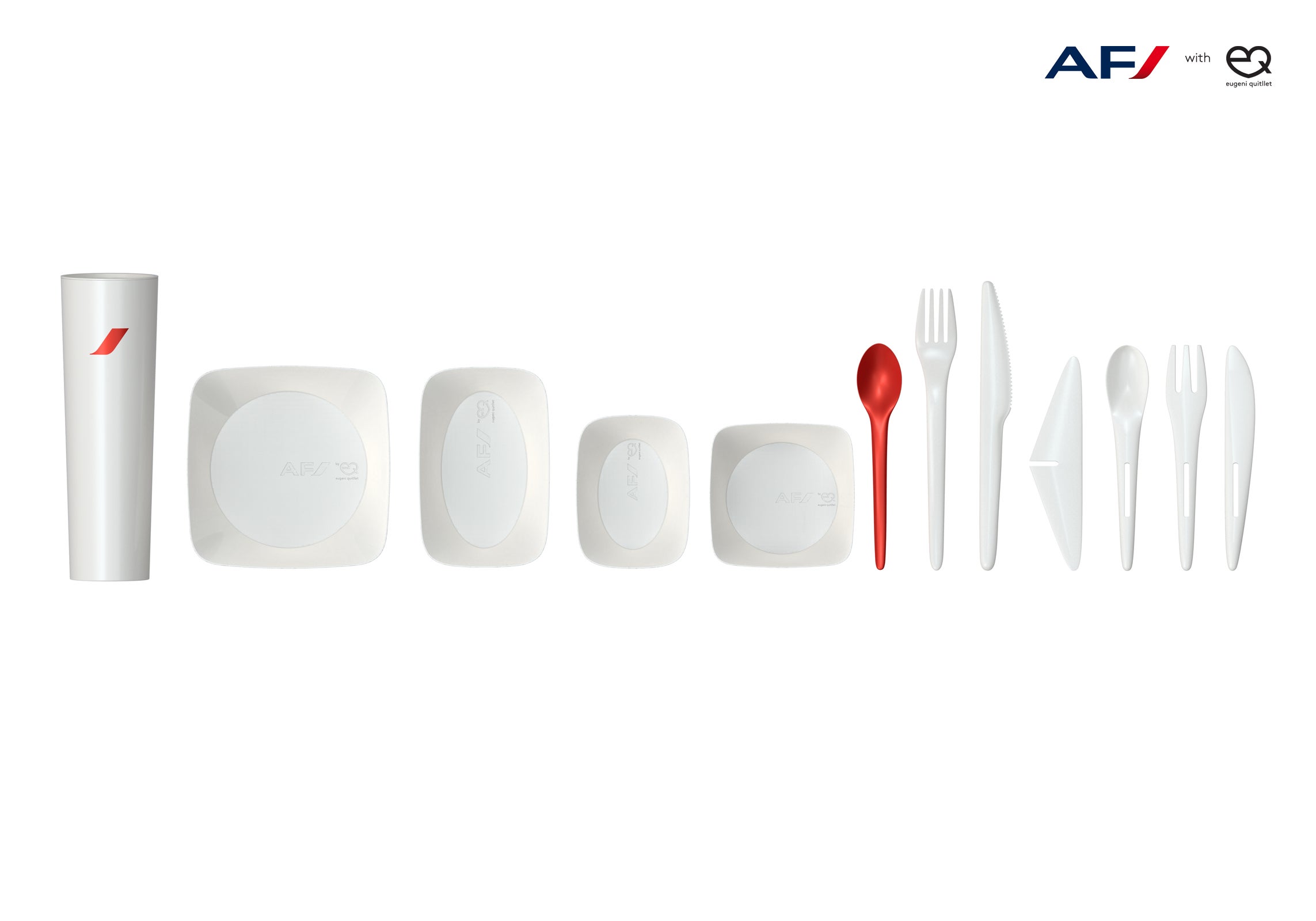 How Plates and Cutlery Are Saving These Airlines a Lot of Money
This post contains references to products from one or more of our advertisers. We may receive compensation when you click on links to those products. Terms apply to the offers listed on this page. For an explanation of our Advertising Policy, visit this page.

According to the International Air Transport Association (IATA), fuel accounts for a whopping 20% to 30% of an airline’s operating costs. Though airlines pass on some of their fuel costs directly to passengers in the form of higher airfares and surcharges, carriers look for ways both big and small to cut their fuel consumption.

Their strategies for doing so include everything from investing in more fuel-efficient aircraft like the Boeing 787 and Airbus A350, advancing the use of biofuels both on aircraft and at airports, and exploring more efficient navigation systems. However, some of the ways airlines are lightening their loads (heavier planes mean more fuel) might not be so obvious.

Airlines experiment with elements like lighter-weight seats, heat-resistant exterior paint, and better engine-washing methods to reduce energy needs.Then-American Airlines CEO Bob Crandall even notoriously bragged that he saved $40,000 a year in fuel costs from the reduced weight of simply removing a single olive from every first-class salad served.

When it comes to fuel burn, every ounce counts. So several carriers, including Air France, KLM and Qantas, have worked with industrial and interior designers to create eco-friendly serviceware that, because it weighs less, saves fuel. The items are pretty stylish, to boot. Here are how these airlines incorporated lighter tableware into their operations, and what kind of fuel savings that amounts to.

As part of the complete design refresh for its Boeing 787-9 Dreamliners and the debut of its new longest route from Perth (PER) to London (LHR), Qantas asked industrial designer David Caon to create a new line of in-flight tableware for the airline.

Caon also oversaw the design of the 787 cabin interiors and worked with Japanese manufacturer Noritake, which has been making Qantas’s tableware since 1962, to create an entirely new set of crockery, cutlery and glassware. The line includes 16 fine-bone china plates and dishes, five stainless-steel utensils and four new types of glasses, including stemless wineglasses. The items debuted on 787 flights, but have since been put into service in international first, business and premium economy cabins, domestic business class, and in the Qantas network of lounges.

"Although the new tableware has now been rolled out across our fleet," said Qantas’s Head of Customer Experience, Phil Capps, "the fact that it launched on the Dreamliner is significant. We are maximizing the aircraft’s flying range with our Perth to London route, and because our new range of serviceware is 11 per cent lighter, we have some great fuel saving benefits."

Caon depended on Noritake’s expertise to make the dishes lighter. He noted that they used the same fine-bone china as in Qantas’s previous service items, but they could not just make them super thin, or they would break from normal wear and tear. Instead, he and the Noritake team had to think creatively about relative thickness and density at precise points in each piece in order to keep their weight down without compromising durability.

Caon also said, "We took key design cues from the 787 interiors as our inspiration for the tableware." That meant fewer straight lines and a distinct curvature applied to each object, which prevents slippage and spills during service, but also allows for more efficient stacking, transport and washing, all of which reduce the items’ carbon footprint.

Capps noted that champagne glasses in first class are 20 grams lighter than before, dessert spoons in first and business are 10 grams lighter and dinner plates in business are 275 grams now instead of 352. "Even a small saving on an individual item like the dessert spoon, just 10 grams each, will deliver significant reductions when scaled across the entire fleet," he said. (One ounce corresponds to 28 grams.)

Now for a few fun numbers: Each 787 carries about 3,000 pieces of tableware, and an A380 carries nearly double that. The airline estimates that the weight reduction of the new items will amount to an annual saving up of to 535,000 kilograms in fuel. According to Qantas, that’s equivalent to 70 flights between Sydney (SYD) and Melbourne (MEL).

"Air France’s ambition was to design an elegant and refined tableware range, which was aesthetic, lightweight, ergonomic, and in line with the air transport industry’s requirements," said Air France’s Head of Architecture and Design, Véronique Jeanclerc. "One of the main objectives," she continued, "was also to reduce the weight of the new meal trays, to cut its carbon footprint."

Among the unique touches are a paper cone containing candies that passengers can take as a souvenir, and children’s silverware that can be configured into toy planes, thanks in part to slots in them that also make them lighter.

You might notice that these items are disposable, and with the current debate over single-use plastics raging (and rightly so), wonder how much better these items really can be for the environment.

Nathalie Simmenauer, the airline’s VP of Environment and Sustainable Development, explained that the disposable items are so much lighter than non-disposable versions that the reduction in carbon output from fuel savings alone made them worthwhile. She also noted the airline saves energy not having to clean them, and in the disposal process, Air France is able to capture and recycle heat energy. She also said that, by working with a French manufacturer, the airline reduced its transport-related emissions.

So how much lighter are the items? Air France claims the trays and tableware reduce the weight of service materials in the cabin and associated carbon emissions by a third. With 14 million meals served onboard each year, this translates to 2,742 tons. According to Air France’s carbon emissions calculator, that’s the equivalent of 2,565 round-trip flights by a single passenger between Paris and New York, which equates to roughly nine full 777 flights or five A380 flights.

You might recognize Wanders’s work from hotels like the Andaz Amsterdam and the Mondrian Doha. KLM first approached him in 2007 to design a new range of food service items for its World Business Class cabins, which the airline also began updating in 2013.

Wanders’s creations debuted in-flight in 2011, and since then, the designer has created a range of 40 pieces including the trays, dishes, glasses, cutlery and linens.

The items are unique in a number of ways, including all the little references and homages to traditional Dutch design. The cutlery, for instance, features filigreed patterns on its handles that are meant to evoke the Netherlands’ historical lace industry.

The scalloped edges of the plates, which include idiosyncratic shapes like half-circles, are another reference to lace. The bright white-and-blue patterns on many of them are a distinct nod to the country’s famous Delft tiles, while the salt-and-pepper dispenser looks like an hourglass or navigation instrument from the country’s seafaring past. The ornamental edges of the service trays mimic a gilt frame you might see holding a Rembrandt in the Rijksmuseum in Amsterdam.

Wanders described the line in an interview with the KLM blog in the following way: "We created a system that is not recognizable as a system, and this makes it flexible. It means you can remove an item and replace it with something new…. They’re highly technical products, but no one can see that, and that’s the way we want it."

On a functional level, being able to mix and match the china means caterers and flight attendants can arrange it more efficiently both in the delivery to the plane and during the interaction with passengers while in flight.

Besides the high-design hints, though, there is one aspect of Wanders’s service items that supersedes the rest. They are lighter than the airline’s older service items.

Like some other airlines, instead of talking about how much fuel the lighter items save, KLM frames this as an environmental issue by way of reducing its carbon footprint. Take this with a grain of salt, however, since one of the ways Wanders made many of the items lighter was to construct them from plastic rather than porcelain. Their non-biodegradable lifespan must be taken into account, but like Air France, the airline disposes of the items in such a way that it is able to recapture the heat energy produced and the petroleum components of the plastic items.

I’d be more cynical about this narrative, but KLM does genuinely seem to be trying to reduce its environmental impact. It has a goal of reducing CO2 emissions by 20% compared to 2011 levels by 2020, pioneering sustainable biofuels, investing in more fuel-efficient operations technology, and offering a carbon-offset service that passengers can tailor based on their specific flights, among other measures, though only about 1% of passengers actually use this option at the moment.

The airlines that revamp their serviceware point to it as being eco-friendlier and a way to reduce carbon emissions. However, at the heart of these initiatives is the economic incentive to save as much money as possible on fuel. That’s not necessarily a bad thing. None of these airlines has compromised on design or passenger experience in order to make these changes. And though their motives might be economic, at least they are having a positive environmental impact as well.

Related stories
Legislation that could gut credit card rewards set to move through Congress
Would you stay at 1 of these 8 haunted hotels this Halloween?
Southwest winter flash sale: Get one-way flights for as low as $29
You can currently buy points and miles with up to a 100% bonus — but should you?
Featured image by The new range of dishes and utensils Quitllet designed for Air France. Image courtesy of Eugeni Quitllet.