Articles
Ariana Arghandewal has been writing about points and miles for almost a decade. She previously served as editor at FlyerTalk, Frugal Travel Guy and NerdWallet while running her own travel blog, PointChaser.
Follow
May 26, 2021
•
8 min read 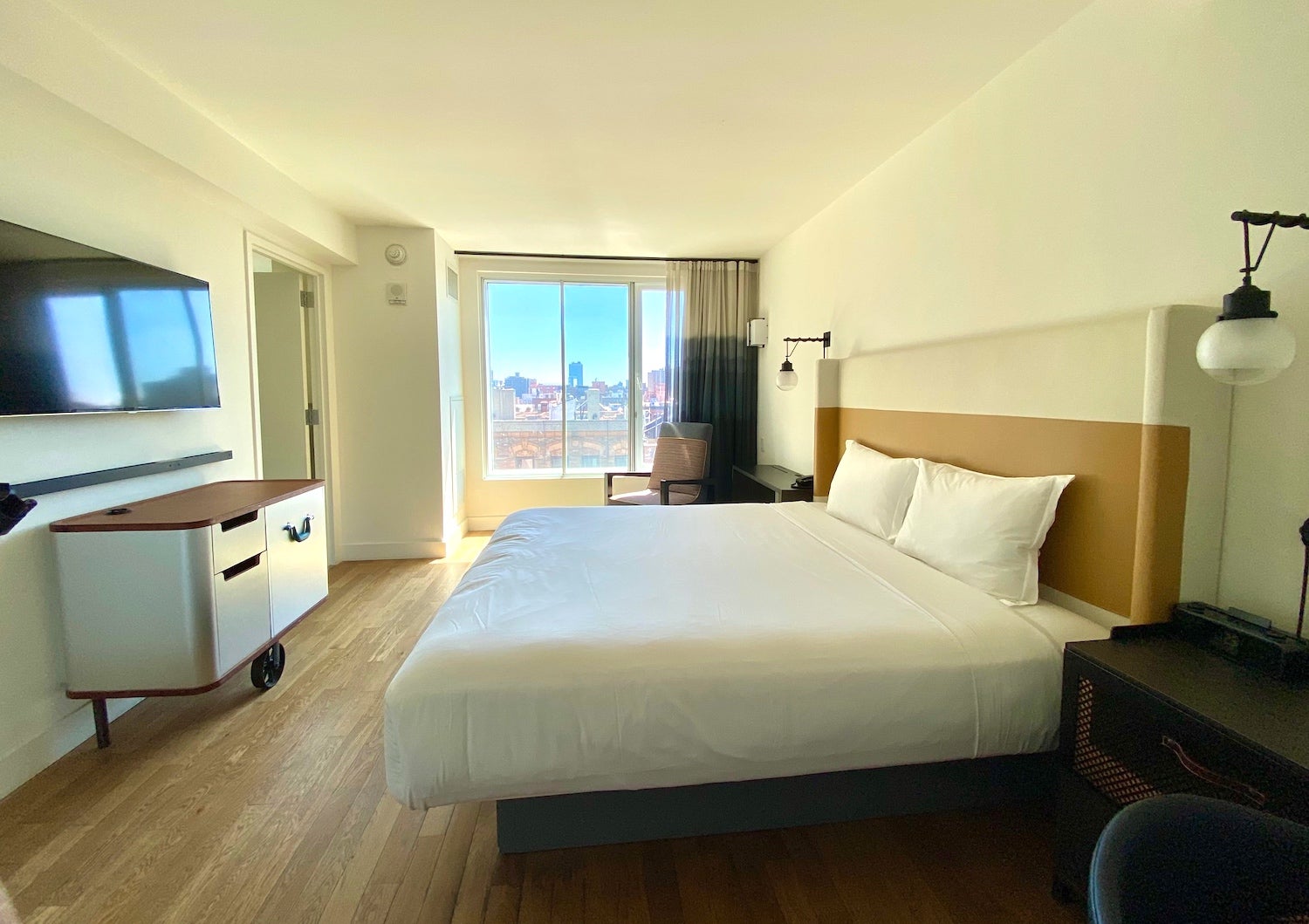 /strong> After publication, the manager of the hotel reached out to The Points Guy. His response is included below.

Editor's note: After publication, the manager of the hotel reached out to The Points Guy. His response is included below.

Two weeks ago, I was in New York, enjoying a post-vaccine vacation. I was there for a week and decided to spend my time between two hotels: Moxy NYC East Village and the Hotel Indigo Lower East Side. Both hotels are located in neighborhoods I love. The IHG-affiliated Hotel Indigo, in particular, is on historic Orchard Street (Note: The hotel's address is on Ludlow, but the entrance is on Orchard).

The neighborhood has so much charm, it's near all of my favorite places to eat and close enough to a subway station to make my way around the city easily.

I was excited to finally stay here on this visit, but what I experienced from the moment I walked in shocked me. Here's why I checked out of the Hotel Indigo Lower East Side after just 15 minutes.

Three factors contributed to my checking out of the hotel a mere 15 minutes after arrival. It started off well – I arrived around 11 a.m. (well before the 3 p.m. check-in), not expecting a room that early since I don't even have status with IHG Rewards. I asked the front desk agent if I could leave my bag there while I went off to a cafe, but she quickly checked her computer and confirmed that she had a room available for me despite the early hour. I was thrilled.

The light-filled lobby and rustic decor made for a comfortable space. When I headed to the elevators, I was glad to see physical distancing markers and hand sanitizer in front of each elevator. I stepped inside, pressed the button to my floor and was immediately hit with the overwhelming smell of urine.

Someone had used this elevator as a bathroom and it was glaringly obvious. By 11 a.m. I would think at least one staff member or guest had noticed and reported it. Apparently, that wasn't the case. I had planned on letting the front desk know about the "accident" after dropping my bag off in the room. Little did I know the elevator was the least of my concerns.

Related: The 37 best hotels in New York City for every type of traveler

As I walked toward my room, a friendly housekeeper smiled and greeted me. I thought about how nice the staff had been so far as I tapped my key card against the reader. It didn't work. I tried the second key and the green light went off.

I pushed the door open and almost let it close all the way when I saw the inside: The curtains were drawn, the bed unmade and there was a bag with someone's clothes on the floor. The room was occupied.

I let the door shut and reopened it to 1) make sure I had seen correctly and 2) to get a photo. When I reopened the door, the bathroom door was open and the light was on. The occupant had gone inside the room, probably after hearing the door open. I let the door close, knowing how upset I would be if some stranger barged into my room out of nowhere.

Related: Why I actually prefer limited-service hotels over luxury chains

I headed back down to the lobby to let the front desk staff know the room they had assigned me was occupied. The agent who had checked me in was no longer there and her colleague looked concerned when I told him what happened. He took my keys and went into the back, probably to speak to a manager or the person who checked me in.

He returned with a new set of keys and casually stated, "Sorry about that. Here's a new room key." There was no acknowledgment of the magnitude of this screw-up. I'm aware that the pandemic has taken a toll on hotels and the staff might be out of practice. That's why I decided not to press the issue, despite how uncomfortable it made me. I let it go. This key issue had distracted me from the urine smell in the elevator, so I forgot to even mention that.

Related: What your hotel stay will look like in a world after coronavirus

I was given a new room on a higher floor that appeared larger than the first one. It had a large window letting in lots of light and a view of Orchard Street. Then the pieces started to crumble. I noticed an overwhelming marijuana smell – overpowering, really.

I tried to open the window to let the smell out, to no avail. As I inspected the room, I noticed the furniture was dusty and the room clearly hadn't been cleaned properly. At other hotels I've stayed at during the pandemic, some hand-sanitizing wipes were left out, surfaces were cleaned and remote controls were wrapped in plastic. None of those things were done in this room. This was the final straw that made me decide to leave.

I called the front desk staff and told them all my grievances: That they had given me a key to an occupied room and what a huge safety breach that was. I had decided to overlook that for convenience's sake and was now in a room that wasn't cleaned properly and had taken an elevator up that reeked of urine. Safety and cleanliness didn't seem like a priority at this hotel and they're paramount to me when I'm staying at a hotel.

The same front desk agent who had checked me in was on the phone and responded with, "OK. We'll refund your card." No apologies, no explanations. I headed downstairs, dropped my key in the glass bowl at reception and ordered an Uber to the Hyatt Union Square, where I had a much better experience.

During the pandemic, cleaning and service standards have changed because hotels are struggling. I try to be mindful of that, even though I've seen hotels in Istanbul maintain the highest cleaning standards, which is quite frankly what all hotels should be concerning themselves with. Some properties are using the pandemic as an excuse for lax housekeeping standards.

But this wasn't just a cleaning issue: It was a safety breach on top of a cleaning issue. As a female solo traveler, the idea of having a stranger access my room because of the front desk staff's negligence is inexcusable. The lax response was a red flag. I should have left then, but I didn't want to deal with the hassle of finding a new place to stay.

Ultimately, all three issues piled on and my gut told me to leave before yet another thing went wrong. I didn't feel comfortable and there was no sense in staying when that was the case.

After checking out, I contacted the hotel to let them know about the issues I experienced. They were apologetic and framed the room key issue as a cleanliness concern because of the pandemic rather than a safety breach. That reaffirmed my decision to leave early.

My experience at the Hotel Indigo Lower East Side was disappointing and some might call it an overreaction on my part. But you have to follow your gut and when multiple things go wrong and incite a nonchalant reaction from the staff, it was a red flag for me.

While I still want to stay at this property, I'm going to wait a few months until travel goes back to normal and the staff has a chance to get more experience when it comes to addressing issues like these.

Response from the hotel's management

On behalf of the entire hotel team, please accept our apologies for your recent experience. I would like to assure you and your readers that this is not commonplace for our hotel, rather was completely unacceptable, and I am addressing thoroughly with my team. Like so many other New York City hotels, we are in the process of ramping back up following a very challenging year. While we always do our best to deliver the high level of service our guests expect and deserve, we did fall short in this instance. Again, I am very sorry and we hope to be able to host you again soon.

Featured image by (Photo by Ariana Arghandewal/The Points Guy
Editorial disclaimer: Opinions expressed here are the author’s alone, not those of any bank, credit card issuer, airline or hotel chain, and have not been reviewed, approved or otherwise endorsed by any of these entities.