Why your next hotel stay might be in a bunk bed

Articles
Summer Hull , aka Mommy Points, ran the Mommy Points site for families who want to travel more for less using miles and points for seven years. She now heads up a variety of special projects at TPG when she isn't exploring the world with her own two girls.
Follow
Oct. 21, 2019
•
8 min read 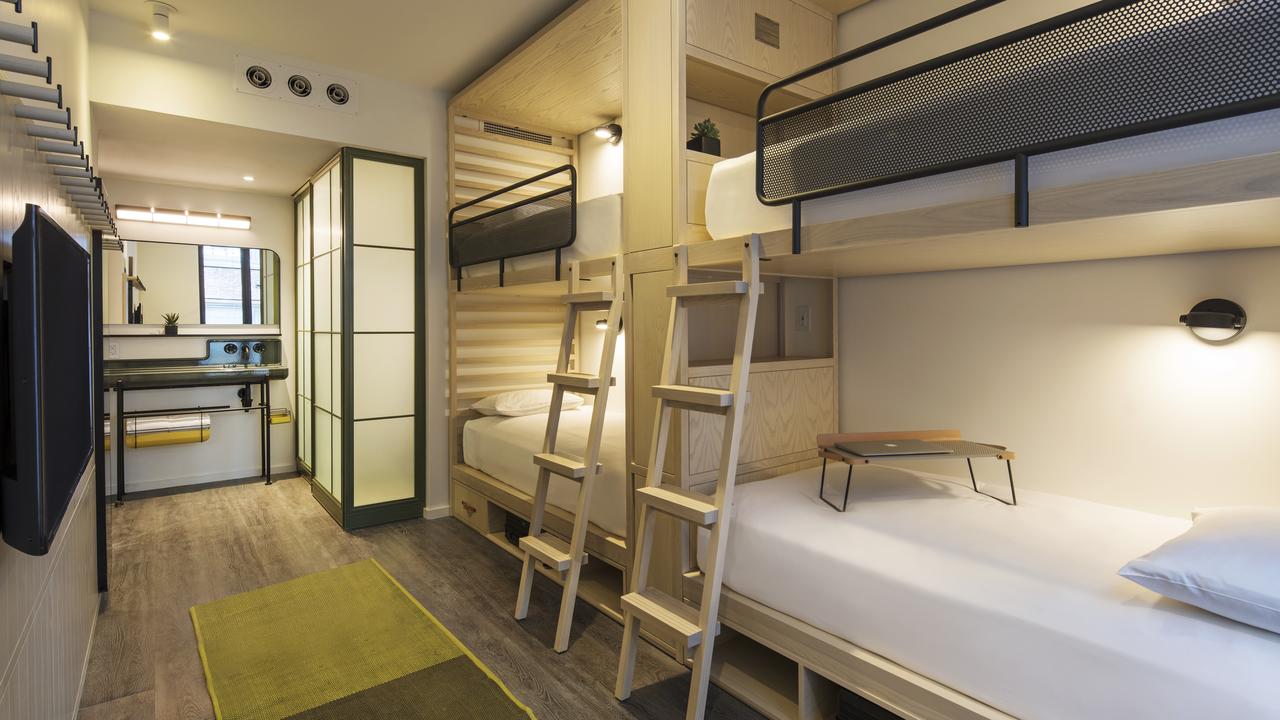 Why your next hotel stay might be in a bunk bed
This post contains references to products from one or more of our advertisers. We may receive compensation when you click on links to those products. Terms apply to the offers listed on this page. For an explanation of our Advertising Policy, visit this page.

Once upon a time, bunk beds were relegated to children's rooms, barracks, hostels and sleepaway camps. But on the cusp of 2020, what was once niche is now cool -- and quickly approaching mainstream.

Bunk beds are emerging from dorm rooms and appearing in very grown-up, even upscale spaces. You may discover that you need to call "top bunk" the next time you check into a hotel room.

We had rooms with bunk beds in the cabins at Disney's Fort Wilderness (above). There was also a kid's room with six bunk beds at a Colorado ski house (below) we rented on VRBO last winter.

And having a bunk bed layout in the family room at TRYP Times Square South (below) in New York City made our stay a steal, especially using Wyndham Rewards points.

But when I saw them at the brand-new W Aspen in Colorado, where rooms easily go for over $1,000 per night during ski season, I knew bunk beds had officially left the children's department.

At the W Aspen, you'll find rooms with between two and four bunk beds that aren't intended for large families, but rather for groups of friends searching for a swanky place to bed down at the base of the mountain (often for a few grand every night).

So how did we get to a point in hotel-room design that there's such a thing as a high-end bunk bed in a room that's not primarily designed for families?

One reality is that bunk beds are being used in hotels for the same reason they were used in children's rooms on "The Brady Bunch": space. You can put more beds in the same square footage if you stack them.

Bjorn Hanson, a hospitality consultant and former dean at New York University's Jonathan M. Tisch Center of Hospitality, told TPG in an email, "There are many reasons for installation of bunk beds, ranging from a solution to providing multiple occupancy in small rooms to providing a space-efficient way to offer bedding for families with children to trying to offer a special lodging experience (sometimes paired with other complementary features of that experience) ...." For example, Hanson said, bunk beds may make a hotel stay seem like a camping experience.

For some adults, "Sleeping in a bunk bed can sound like fun ... but for one night," Hanson said.

We aren't seeing bunk beds used at more traditional brands, such as The St. Regis and Park Hyatt — at least not yet — but brands that attract a slightly younger demographic and embrace a more playful design aesthetic are able to capitalize on the nostalgic element of bunk beds and make them new again. You know, kind of like those restaurants that only sell macaroni or grilled cheese with a grown-up twist.

That's why hotel brands such as Moxy, Freehand and even the W are able to pull off bunk beds in rooms that otherwise couldn't boast so many beds.

At the Moxy in Chelsea, for example, there's a 185-square-foot room (small by most standards), that manages to squeeze four beds into that footprint. Although this room is slightly smaller than those with a single king bed at this property, it costs more per night when paying with cash on every date we checked. Unlike the slightly larger room with a king bed, it also was not available for standard award redemptions using points.

Never one to miss out on a trend, you'll also find bunk bed rooms in Las Vegas, where adults 21 and up are clearly the most sought-after visitors. The LINQ has had bunk bed rooms, but just this year, the Flamingo got in on the action with new bunk bed rooms and suites that they describe as "inherently social".

Do know that in almost every instance we checked, the bathroom space in these bunk bed rooms has not been expanded to keep pace with the increased sleeping occupancy. In other words, be ready to take turns.

The shift from placing bunk beds off to the side in hotel rooms clearly meant for families near, say, Disneyland and Disney World, to using bunk beds as the primary sleeping arrangement in spaces designed for adults, has been happening steadily.

Freehand debuted its first property in Miami Beach in 2012 and Marriott followed shortly thereafter with the Moxy Milan in 2014. According to a 2015 article by The Wall Street Journal, shared rooms with bunk beds "are at least as likely to attract groups celebrating a bachelorette party or a guys’ weekend" as they are to meet the needs of families, according to hotel executives.

And this time last year, a new hospitality brand called Life House opened its doors in Miami. The collection's co-founder and CEO, Rami Zeidan — who formerly worked for the hotel operator responsible for Freehand, Sydell Group — said that "people do not have to choose between the experience they want and what they can afford." Those people, he said, include business travelers, "cool parents" and "mature millennials," who might not mind bunk beds (at least those with full-size mattresses) if it means staying in a cool hotel in a hot neighborhood.

Certainly bunk beds allow for higher-density sleeping at a more affordable rate than booking multiple rooms. Friends can stay together in one space without seeking out a vacation rental that may be lacking in amenities or design.

Travelers' reactions to this trend, at least according to the TPG Lounge, are mixed. Reactions to bunk bed-only rooms ranged from "That's a no from me and I hope it's not a trend," to "I would love this. For the kids." And: "I'm alllllll about this."

By and large, though, the sentiment was that having more room options is a good thing and that bunk bed rooms could be good for some people on some types of trips -- like family trips or friend getaways. The assumption from most supporters of bunk bed-only rooms was that this would be an affordable way to sleep many in the same space. Sometimes that is absolutely the case, especially when compared to booking connecting rooms to get more beds. However, as the W Aspen has proved -- budget-friendly and bunk beds don't always land in the same sentence.

Like it, love it or hate it, it's clear, from the South Congress Hotel and Hampton Inns of Austin, to the Kimpton Rogue in Washington, D.C. and the Andaz San Diego and now, the hip new W Aspen, that bunk beds in hotels are officially a thing.

So, if this sounds fun to you, grab a friend (or five) and consider making your next vacation a group endeavor — because, unlike young children, they can chip in to help with the cost of the stay.