Inside Hi Fly's A380, the World's First Used Superjumbo 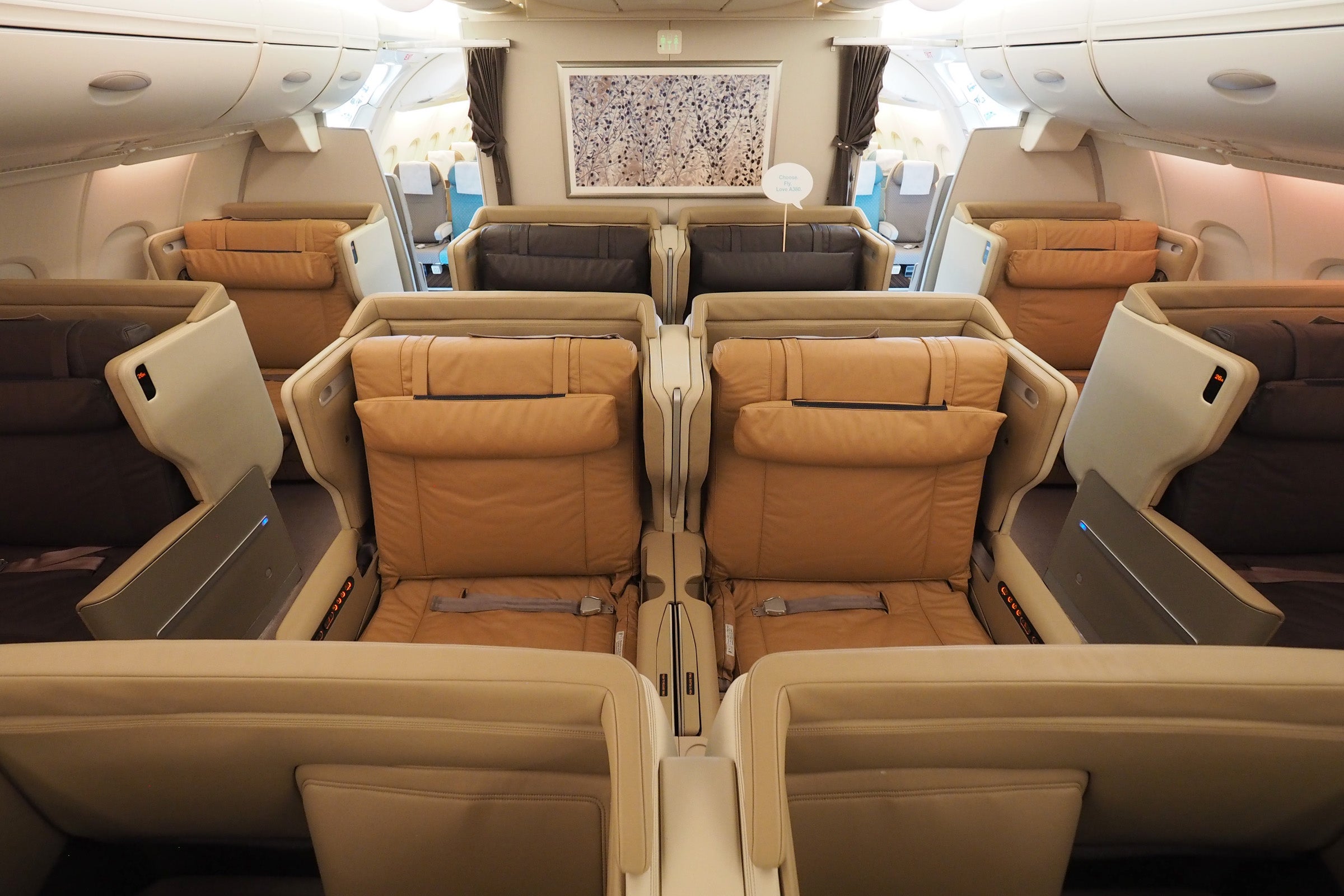 The Farnborough Air Show welcomed a very special guest Thursday morning: the world's first used Airbus A380. The aircraft, which flew for a decade with Singapore Airlines, has now made its way to wet-lease operator Hi Fly.

You can't book a ticket directly through Hi Fly. Instead, this second-hand superjumbo will fly on behalf of a handful of international carriers, whenever duty calls.

Typically, wet-leased planes sub in when an airline doesn't have enough aircraft to operate all of its scheduled flights — either because new planes have missed their delivery schedule, or because older aircraft are grounded as they undergo maintenance. This A380 will be used for various charter operations as well.

Hi Fly's A380 will carry a total of 471 passengers, with 12 in first class, 60 in business class and 399 in economy between its two decks. This configuration — and the interior itself — exactly matches what had previously flown with Singapore.

While the Singapore Airlines branding has been removed, the interior hasn't changed a bit otherwise.

That means the lower deck offers a total of 12 first-class suites, arranged in a 1-2-1 configuration.

You even get the (former) Singapore Airlines double bed!

All suites have sliding doors, and while you can't make a double bed with the window seats, they offer considerable privacy.

Check out a flight review on the A380 in Singapore Suites here.

Business class is spread between two cabins, and occupies most of the upper deck.

Seats are arranged in a 1-2-1 configuration as well.

This older version of Singapore's business-class seat is especially spacious.

Aside from the odd flat-bed design, which requires a flight attendant to fold the seat-back forward for bedtime, my one criticism is the footwells.

Most of the footwells are fairly narrow, though bulkhead seats offer a very wide platform, instead.

The business-class lavs aren't especially large, but they do the trick.

There's even a walk-up bar on the upper deck, which was set up in an in-flight configuration for our tour.

Check out a flight review from Singapore Airlines' business class on the A380 here.

Most of the plane's seats are in the economy cabins.

There are 399 seats in total, occupying almost the entire lower deck in a 3-4-3 configuration, and the rear part of the upper deck, where seats are arranged 2-4-2, due to the narrower cabin.

While you can't book a seat on Hi Fly's A380 directly, the carrier has operated service on behalf of carriers flying to the US in the past — most recently Norwegian Airlines, which has had to ground some of its Dreamliners due to engine issues. So it's only a matter of time before this superjumbo returns to US shores.

If you do manage to book a seat on board — especially one in first or business class — you'll definitely be in for a treat. While you'll obviously be missing out on Singapore's legendary service, when it comes to wet lease and charter aircraft, the seats really can't be beat.