Articles
Christine Negroni is the author of the Penguin bestseller, The Crash Detectives. She writes about aviation for The New York Times, ABC News and other publications.
Follow
March 21, 2019
•
10 min read 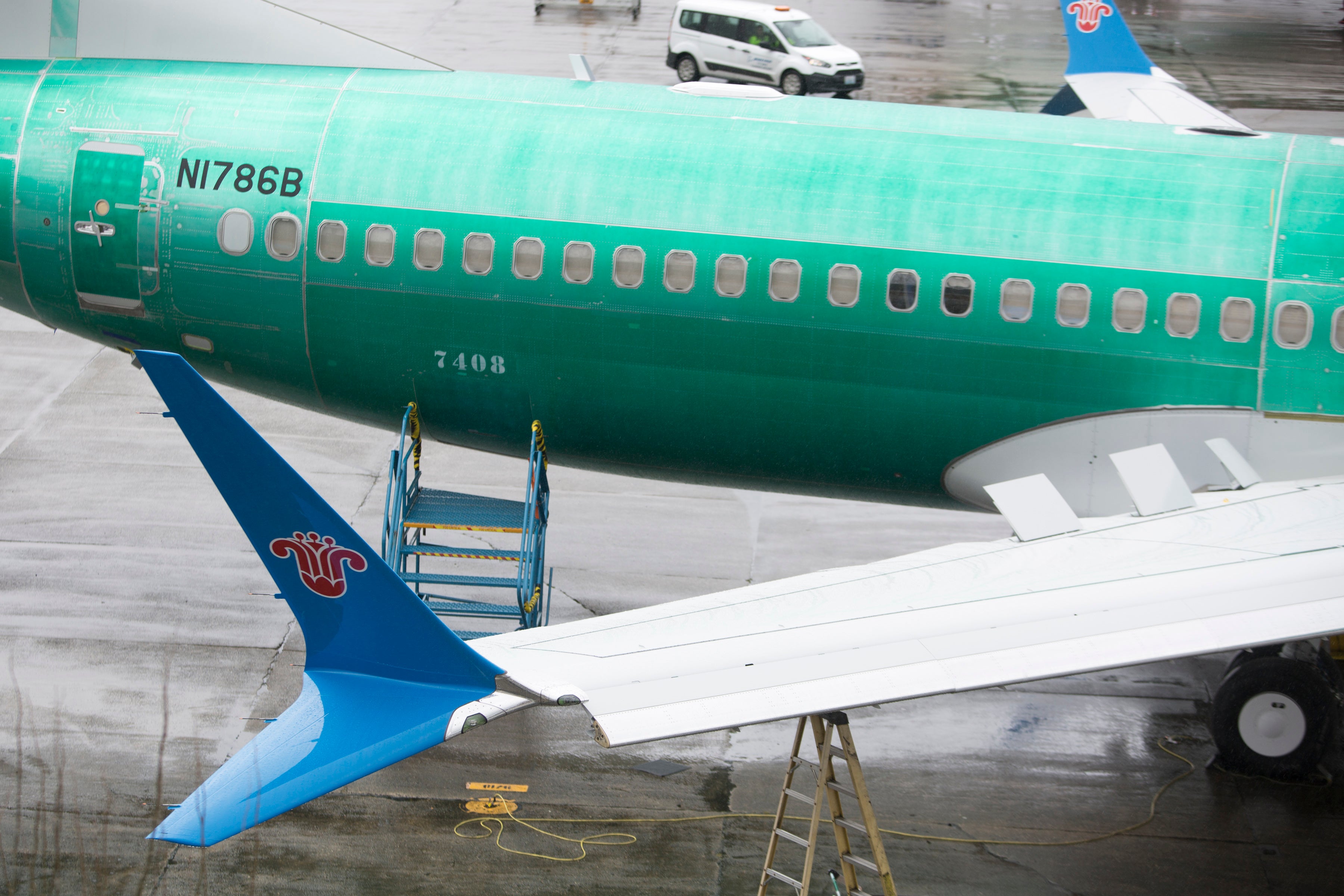 Four Different Ways the 737 MAX Crashes Might Land Boeing in Court
This post contains references to products from one or more of our advertisers. We may receive compensation when you click on links to those products. Terms apply to the offers listed on this page. For an explanation of our Advertising Policy, visit this page.

A company as big as Boeing is no stranger to the courtroom, but news this week that US prosecutors have opened an investigation into the design of the Boeing 737 MAX is a rare case of a planemaker potentially facing criminal charges for its engineering decisions.

The global grounding of the Boeing 737 MAX follows two devastating plane crashes, one in October and a second earlier this month, in which a total of 346 people were killed. Preliminary evidence seems to indicate a similar problem in both accidents, related to a new flight-control system that was installed for the first time on the MAX version of the Boeing 737.

According to the Associated Press and the Wall Street Journal, a federal grand jury has subpoenaed documents from Boeing. While not addressing this specifically, Boeing’s CEO Dennis Muilenburg released a video statement Tuesday saying that the company was “working in full cooperation with the US Federal Aviation Administration, the Department of Transportation and the National Transportation Safety Board on all issues relating to both the Lion Air and the Ethiopian Airlines accidents.”

While investigators work to understand the brief and erratic flights of Lion Air 610 and Ethiopian Airlines 302, Boeing’s lawyers may be bracing for a legal onslaught on four different fronts:

Over the years Boeing has paid billions of dollars in fines, and corporate executives have gone to prison, for infractions that include bribery, invoice padding and even taking liberties with safety, as happened when the US Air Force accused Boeing of delivering 140 Chinook helicopters with defective gears. Five servicemen were killed in 1988 in one of several crashes that resulted from the deception.

Still, it is highly unusual for a federal grand jury to be looking into possible criminal charges related to the 737 MAX accidents.

In the United States, a clear line separates safety investigations from those involving criminal or civil liability. So much so that probable-cause reports issued by the National Transportation Safety Board are inadmissible in air-crash lawsuits. But this is not the case in other countries, where air accidents can be examined for safety and enforcement purposes on parallel tracks.

In France, for example, Continental Airlines (now United) and two airline employees were tried for involuntary manslaughter after the crash of the Air France Concorde which killed 113 in July 2000. A piece of metal fell off a Continental jet onto the runway at Paris-Charles de Gaulle with the Concorde departing right behind. When the metal hit the underside of the Concorde, it triggered a fire and a catastrophic chain of events that ended in a crash.

In Brazil in 2006, two American pilots and Brazilian air traffic controllers were charged for their roles in a midair collision when a US executive jet sliced the wing off a Gol Airlines 737. The executive jet landed safely, but the 737 crashed in the jungle, killing all 154 onboard.

And in one of the few cases where a criminal case was made in an air accident in the US, three maintenance workers and the company that employed them were all charged with federal crimes in Miami following an onboard fire that caused a Valujet DC-9 to go down in the Florida Everglades, killing 110 people.

But the criminalization of errors is considered antithetical to aviation safety.

“Criminal actions are so rare in the aviation industry, and that’s for a reason — because it's safety first,” said Katherine Staton, a partner with the defense firm Jackson Walker LLP in Dallas, who represented air-crash plaintiffs earlier in her career. “That really is something that I believe in. We all should be careful in rushing to judgment, and we should celebrate that there have been so few criminal prosecutions in the aviation industry.”

Ciivil lawsuits brought by the families of passengers

Prior to the March 11 crash of Ethiopian Airlines Flight 302, several lawsuits had already been filed in the US on behalf of families of victims of the Lion Air crash in October. Lawyers associated with those cases privately worried that the court would dismiss the suits on the grounds that they should be heard in Indonesia, home to the airline and many of the passengers.

The Ethiopian crash has changed the equation. Not only were American citizens on the flight, but others were flying on tickets issued in the US. It would be difficult for a US court to dismiss Ethiopian suits, according to Justin Green, an aviation lawyer with the New York law firm Kreindler & Kreindler. Now, the possibility that the two crashes may have a common cause means Lion Air plaintiffs could also benefit.

Tom Ellis, a spokesman for Chicago’s Nolan Law Group, which filed a case in federal court in Illinois on behalf of Lion Air families, said the firm was committed to fighting to keep the cases in the US, and that in light of the second accident, there are larger questions that should be addressed in America. “It doesn’t change the Lion Air cases themselves,” Ellis said, though it changes the focus of the dispute because both “relate to the design that was done here and relate to the certification that was done here.” The Lion Air accident, he added, “was not a one-off.”

Green agrees that plaintiffs’ lawyers will make the argument that “ultimately a US court should decide if the 737 Max is safe.”

Lion Air and Ethiopian Airlines are likely to carry what is called “hull loss” insurance, which reimburses them for the loss of the airplane, estimated by The New York Times to cost $100 million each. Other policies pay for other costs associated with the crash.

Brian Hogan, an aviation-insurance consultant and accident investigator, ticked off some of what he said is a fairly long list of expenses, including recovery and repatriation of remains and everything involved with handling the families of the passengers -- transportation, plus funeral, medical and special-care costs.

Insurance will also come into play in civil lawsuits which, when successful in the United States, can result in some eye-popping damage awards. This is when insurers for every party named as a defendant will face off and decide who is most at fault for the crash. That’s the company that will wind up contributing the most in compensation. The disappearance of Malaysia Flight 370 in 2014 provides an illuminating example of how that works.

Following the disappearance of the Boeing 777, the airline was covered by two insurance companies. Which one paid the claim depended on whether the accident was an act of negligence by the airline or a terrorist act, which is covered as an act of war. As the crash of MH 370 was a mystery, lawyers for both companies squared off before an adjudicator, presenting evidence to support their separate theories to determine which company was responsible for paying the claim. The dispute was settled in private.

As these insurance issues arise in the cases involving Boeing’s 737 MAX, expect similar disputes among insurers, more finger-pointing and more secret resolutions that “depend on what finger is pointed at Boeing by any particular quarter,” Hogan said.

The Boeing 737’s distinction as the best-selling airliner of all time surely helped the MAX secure customers. More than 35 airlines have Boeing’s most modern and fuel-efficient version in their fleet, and a dozen more have MAXs on order. But that very success assured that the grounding of the fleet would have enormous repercussions. In all, 370 planes are affected and the airlines operating them are scrambling to accommodate passengers and have no idea how long the MAXs will be out of service.

While most Boeing customers have kept their frustration out of the public eye, Norwegian CEO Bjorn Kjos televised his demand to Boeing: “We will send the bill to those who produce this aircraft,” Kjos said in a video statement released on Twitter.

Kjos' low-cost, long-haul airline has been particularly affected by Boeing’s troubles in recent years. In 2013, on the eve of Norwegian’s inaugural trans-Atlantic flights from the US to Europe, its brand-new 787 Dreamliners were grounded because the widebodies were deemed unsafe to fly because of problems with the lithium-ion batteries on board. Norwegian’s Dreamliners were grounded for a second time in 2018 at the height of the summer travel season, this time caused by a problem with the plane’s Rolls-Royce engines, for which Boeing had no responsibility. Completing the trifecta, Norwegian’s 18 MAX airliners are now out of service after the two recent crashes.

While many airlines have business-interruption insurance to cover them in circumstances like this, Boeing will undoubtedly be targeted by the airline insurance companies seeking subrogation of the claims. Simply put, that means that if Boeing was responsible for the airlines’ losses, Boeing’s insurance should reimburse the airline’s insurance company.

There are differing views about whether the whole situation will end up in court.

“Absolutely there will be litigation as to coverage,” one insurance insider predicted. But another who preferred not to be named because some clients may be embroiled in these disputes had a more optimistic view. There is no benefit to airlines and Boeing going to war, this person suggested, because at the end of the day the airlines need Boeing, and Boeing needs the airlines.