Bike across America? That's what this former airline employee did during the pandemic 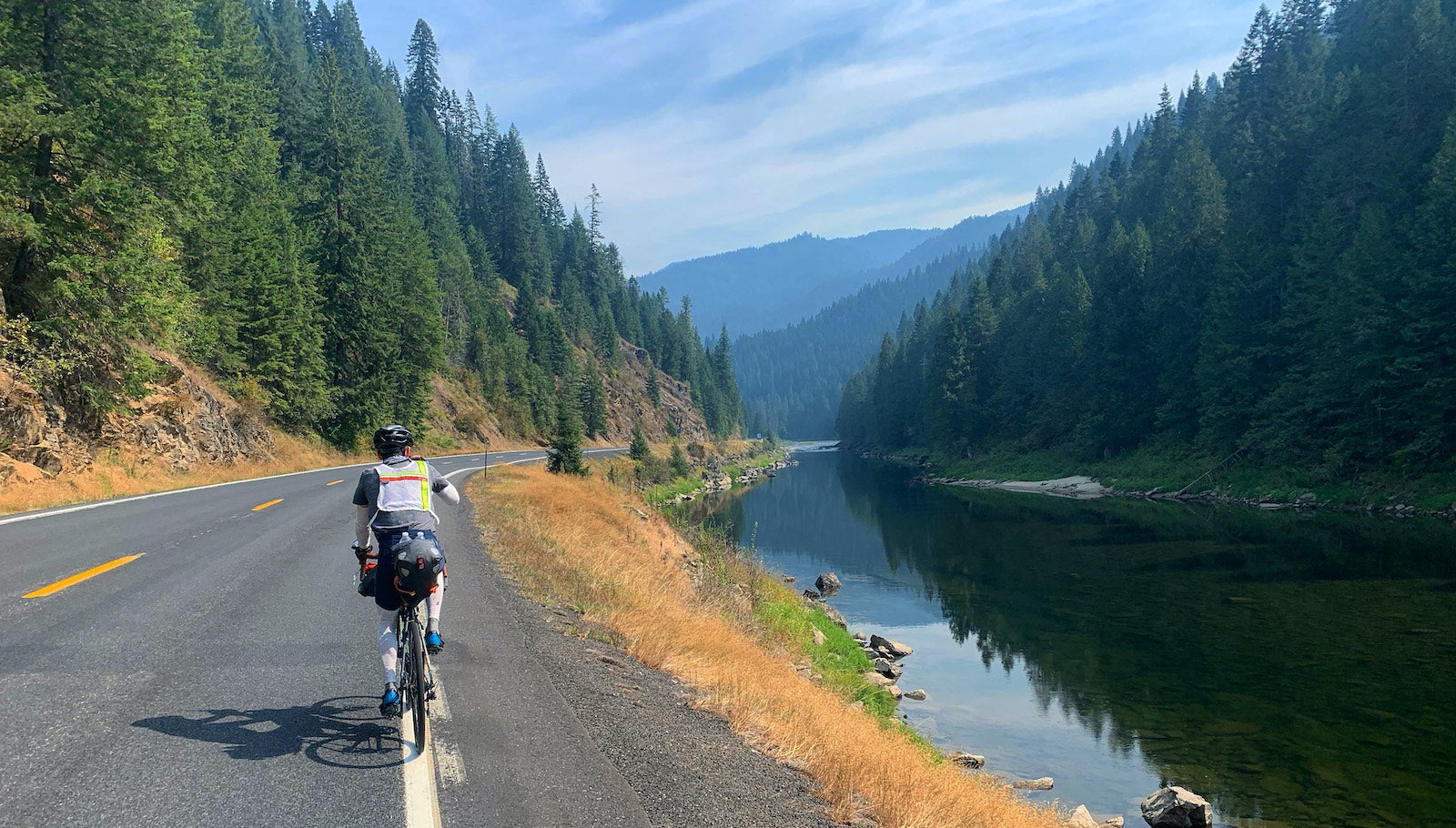 Bike across America? That's what this former airline employee did during the pandemic
This post contains references to products from one or more of our advertisers. We may receive compensation when you click on links to those products. Terms apply to the offers listed on this page. For an explanation of our Advertising Policy, visit this page.

"It's the not the destination, it's the journey."

That line popularized by author Ralph Waldo Emerson rings true with travelers around the world — whether they're mesmerized by midnight storms while flying high above the Amazon or awoken to mist rising off cornfields in Ohio on a long-distance Amtrak journey.

But, for many, such journeys went on hiatus during the coronavirus pandemic. Destinations closed and many trips were canceled. And the life journeys of tens-of-thousands of airline employees were detoured — some derailed altogether — as they either took voluntary departure packages or were furloughed amid the historic crisis facing the industry.

Each former employee's story is unique and the shrinking airline industry has placed an undue hardship on many, especially as Congress failed to act on a second coronavirus relief bill at the end of September. Some, finding ample hours of idle time on their hands, have found ways to put that to good use.

Like many frequent flyers during COVID, Andrew Mortensen was grounded. He was living in his parents' basement after taking a voluntary departure from his job in revenue management at United Airlines and needed an outlet. A cross-country bike ride raising money for The Trevor Project — an organization that works to prevent LGBTQ youth suicide — proved just the ticket.

His roughly 4,400-mile trek took him from near Neah Bay in the northwest corner of Washington's Olympic Peninsula, across 11 states before ending at the Victory Monument in Yorktown, Virginia.

Mortensen did it all in just 41 days, plus three recovery days en route. And he did it solo and unsupported — or without a support vehicle trailing him — save for several other cyclists and family that joined him for some segments along his journey.

"I figured, hey there’s this country that I’ve essentially traveled and hopscotched around but never connected the dots," Mortensen told TPG in an interview after his cross-country ride. "I figured it would be a really good time to do it."

Mortensen is a regular runner and cyclist. Prior to his cross-country ride, he had completed several marathons as well as an ultra-marathon, which refers to any running race longer than 26.2 miles. His training log on the popular activity tracking app Strava shows he was no stranger to riding a "century" — or 100 miles in a single ride — prior to his transcontinental journey.

The decision to raise funds for The Trevor Project arose from his own experience coming out. Mortensen, who identifies as gay, said he was ridiculed and even had things thrown at him for simply holding hands with his then-boyfriend on campus at Miami University in Ohio after he came out during college. His experience, plus the suicides of two friends, led him to The Trevor Project, where he began volunteering in January.

Mortensen could not have picked a better time to raise awareness and funds for struggling youth.

"Since the onset of COVID-19, the volume of youth reaching out to our crisis services has significantly increased, at times double our pre-COVID volume — and we know the pandemic has exacerbated existing mental health disparities faced by LGBTQ youth," JB Stark, director of individual giving at The Trevor Project, told TPG. "We are so thankful for Andrew's passion, perseverance, and generosity."

Cycling across the U.S., while not the most common long-distance biking challenge, is not unheard of. No formal count is taken, but the Adventure Cycling Association estimates at least 500 people a year ride its 4,200-mile TransAmerica Trail that runs from Astoria, Oregon, to Yorktown, says Alex Strickland, editor-in-chief of the organization's Adventure Cyclist magazine.

The group bases its estimate on the number of cyclists who stop at its Missoula, Montana, office during their trek.

This year, however, the pandemic appears to have reduced the number of transcontinental cyclists. Only about 90 people stopped by the association's offices this summer, Strickland said.

"We sold more paper maps this year than we did in 2019, which to us indicates that a lot of folks are dreaming and planning for future trips," he said. "Hopefully they all come by to say hello."

Related: Why I bike to flights from Washington National Airport

Mortensen, for one, was among those who bypassed the association's office on his ride as it was closed the day he passed through Missoula.

Closures weren't a problem for accommodations along the route, though Mortensen did find places that were either booked full or overpriced as travelers flocked to socially-distant destinations like Yellowstone National Park.

He spent about half of his overnights in paid accommodations and the other half in a mix of free campgrounds, churches and even with hosts from "Warmshowers" — a service Mortensen described as akin to couch surfing for long-distance cyclists.

This is not to say the pandemic did not affect Mortensen's ride. About a third of restaurants, bars and motels along the route were closed, Mortensen observed. And while he said he never struggled to find a place to stay, he did have several longer-than-expected days when places were closed: for example a 16-mile leg turned into a 66-mile one that forced him to flag down passing motorists for water.

The biggest challenge Mortensen faced was the physical toll of the ride itself. He took a small fall on Day 14 that left him with a sore hip and developed several "maladies," as he put it, that forced several unplanned rest days en route.

“These long, lonely stretches of asphalt were intimidating, mentally arduous in their infinite expanse. I imagine this is what Kansas will be like," Mortensen wrote on Strava after riding 128 miles through Wyoming on Day 20.

Despite the seeming tedium of riding mostly alone, Mortensen said he was seldom bored. For the most part, he enjoyed the natural beauty of the country unfurling below his two wheels, he said. Only in Kansas did he put in headphones and listen to podcasts to pass the time.

Asked what he listened to, Mortensen burnished his AvGeek credentials by recommending an episode of NPR's "How I Built This With Guy Roz" that featured with Southwest Airlines-founder Herb Kelleher.

“As travelers we go to these huge spots, like the Grand Tetons or we go to the Great Wall or the go to the temples in Myanmar — we go to a spot and it’s amazing and it really just blows your mind away," he said. "Riding across the U.S. was sort of like a slow drip — like a long, unbroken beauty.”

Related: Washington National Airport is getting a bikeshare option

Asked his favorite spot along the ride, Mortensen did not hesitate: Lolo Pass that connects Idaho and Montana was the most scenic of the trip.

"The scenery there was just stunning ... like this perfect blue sky, 70 degrees, no wind, a raging river next to us, lush forests, perfect road — no cars — it just checked every box," he said.

Of course, not every stretch of Mortensen's route was scenic. On Day 38, he wrote that while riding through Appalachia a "lush forest with a soothing river winding alongside" gave way to less pleasant "buzzing interstate frontage roads" and strip malls.

Related: How to fly with bicycles and other sports equipment

But good and bad — and he emphasized that there was far more good than bad — Mortensen said he is happy with his ride and the funds he raised for The Trevor Project. He not only met his goal of one dollar for every mile, but exceeded it with more than $5,000 raised.

"I’m somebody who always pushed the envelope," he said. "I’d love to get to $10,000 and really make a dent in their broader fundraising goal.”

To that end, Mortensen continues to ride. Setting out from Yorktown south for Key West, Florida, on Oct. 14. He rides wearing a bright orange T-shirt for The Trevor Project, telling anyone who asks why he's riding.

Related: 9 things to know about visiting a national park during the pandemic

“I’ve got time, I’ve got space and it feels good to be here supporting a good cause," he said speaking from a ferry somewhere in the Outer Banks of North Carolina. His goal is to reach Key West by the end of October. After that, he says, it's anyone's guess.

One day, when his rides are done and the pandemic subsides, Mortensen plans to return to work at an airline. But even that dream does not come without caveats; he does not want to feel like he is "a drain on the company" when there are others who need jobs more than him.

For now, Mortensen can rest a little bit easier knowing he is helping those LGBTQ youth that need the most support during COVID. And he's still got miles of open road to ride before he needs to decide where to go next.

Related stories
8 mistakes to avoid when redeeming hotel points
Why you shouldn't open a store credit card during the holiday season
Where to stay at Disneyland: The best on- and off-property hotels
7 Apple Black Friday deals that deliver great savings on travel tech