Why I bike to my flights from Washington National Airport 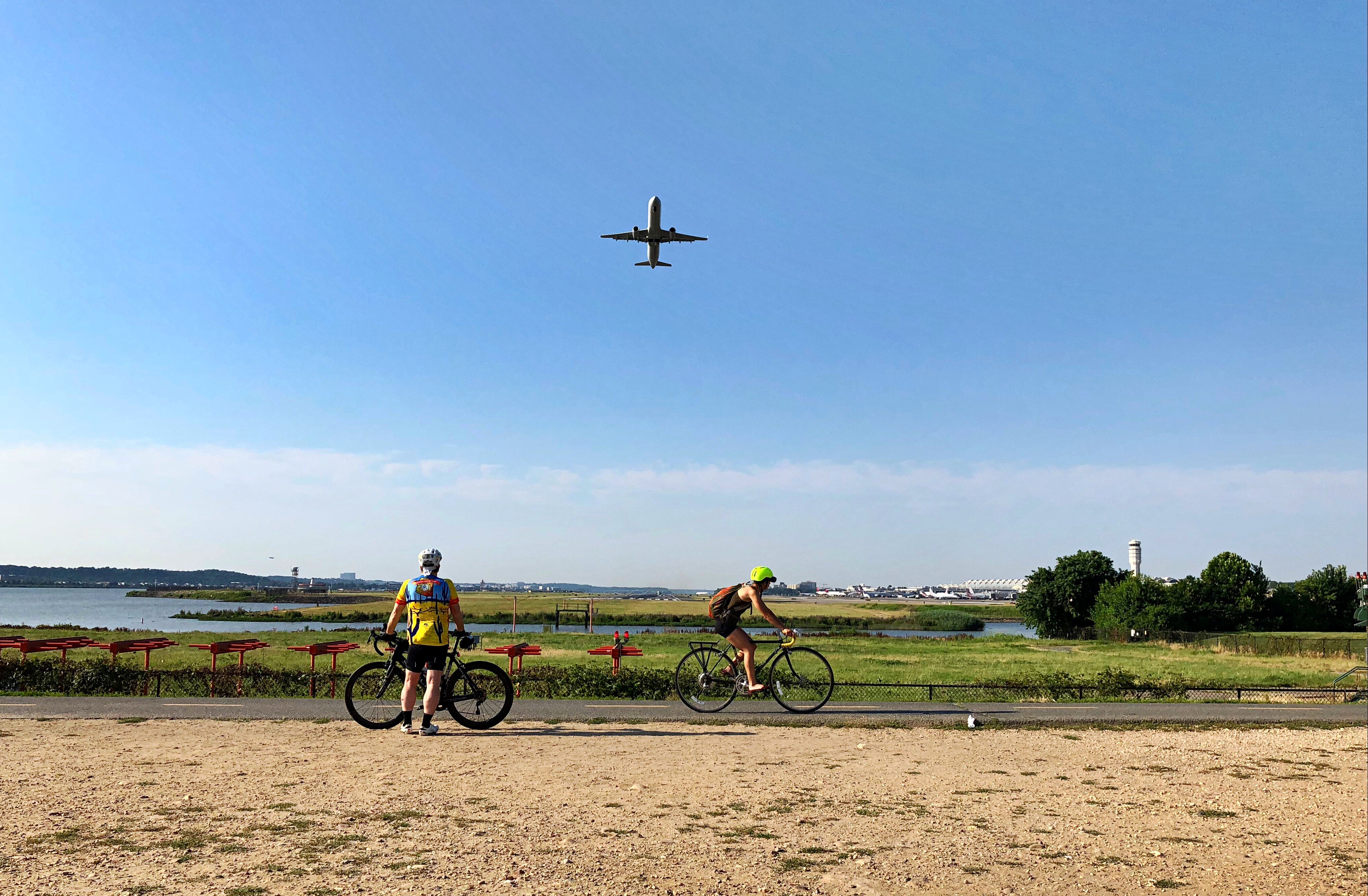 Why I bike to my flights from Washington National Airport
This post contains references to products from one or more of our advertisers. We may receive compensation when you click on links to those products. Terms apply to the offers listed on this page. For an explanation of our Advertising Policy, visit this page.

I like to bike. I ride to work, to do errands and even to catch flights.

Cycling, at least in Washington D.C., is one of the quickest and increasingly popular ways to get around town. While the city has a decent Metro and bus system, the former does not go everywhere and waits for both trains and buses can be lengthy outside of commuting hours. Hence my preference to bike, not to mention the added health, fitness and environmental benefits.

But I’m an aviation reporter and biking to work often means riding to the airport, even to catch a flight. Biking to a flight, by my own estimation, is not unheard of nor is it common — even among the D.C. area’s growing legions of cyclists.

"While Americans are becoming increasingly comfortable with the bicycle as a form of transportation, there are still many trips for which riding a bike might never even cross your mind. Catching your flight is probably one," wrote Outside columnist Eben Weiss in August. "The truth is that under the right circumstances, it’s a perfectly viable one."

The D.C. area's regional planning board found that the number of passengers who used "other" means to get to the airport, or those who did not drive, get dropped off, take a taxi or ride-hailing vehicle, train, bus or shuttle, was miniscule — just 2% of passengers at Baltimore/Washington (BWI), Ronald Reagan Washington National (DCA) and Washington Dulles (IAD) airports in 2017. Cyclists were lumped into this category.

Brian Kalish, a spokesman for the Metropolitan Washington Airports Authority (MWAA) that operates Dulles and National, told TPG that the latter airport's 50 bike racks "see good utilization." However, the authority does not keep data on how many people bike to National.

Part of this is simply structural. Dulles does not have any official bike routes to the terminal. BWI and National do, though the former is a roughly 12-mile ride from Baltimore's Inner Harbor much of which is on roads, according to Google Maps.

National, however, is in an ideal location to bike to a flight. It's right off the popular Mount Vernon Trail that has multiple connections both to the District and to the inner suburbs of Alexandria and Arlington. The airport is especially close to downtown, just a short 4.5-mile ride from the White House, Google Maps shows.

Related: Washington National Airport is getting a bikeshare option

Washington National offers bike racks where cyclists can lock up while they're on the road. Next year, Arlington plans to install a dock for the region's popular Capital Bikeshare program.

How I bike to the airport

Biking to a flight, as much as I like to do it, only works in certain cases. I only ride if I can fit everything I need into a backpack, typically limiting cycling to trips that are just for one or two nights. In addition, I prefer to bike only when both travel days are forecast to have decent weather, and I don't ride when I'm traveling with my family.

Given these conditions, I can only ride to a small percentage of my flights from National. So far this year, I've biked to two of the 10 trips I've taken from the airport. Not bad — that's 20% — but I would like to ride more.

The ride to National is about 7.5 miles from my home in Northeast Washington and it typically takes me less than 30 minutes. This is longer than the 20-minute trip in a taxi or Uber when there is no traffic, but shorter than the combined 32 minute walk and Metro ride — assuming I do not have to wait for a train — to the airport.

My route to National takes in many of D.C.'s iconic monuments. I ride along the National Mall, past the Washington Monument and Jefferson Memorial, before crossing the Potomac River and then biking past every avgeek's favorite spot, Gravelly Point, which lies at the end of DCA's main runway.

I have never had a challenge locking my bike at National, though the airport's racks have gotten busier in recent years.

Many probably wonder how I clean up before my flight. National does not have showers available to travelers, which is less than ideal. But I always change clothes and freshen up in the restroom before going through security.

And I have never had any issues — though a few raised eyebrows — taking a bike helmet through security.

Cycling to flights is a growing trend

Cycling to your flight eliminates all the headache and stress of traffic, or even waiting for the train or bus. Imagine if some of those passengers complaining about waiting for a taxi or ride-hailing pick up at Los Angeles International Airport (LAX) this week had been able to leave the airport on a bike? The whole system could work much better.

The trend is big enough to attract the attention of The New York Times, which profiled several cyclists and airports earlier this year.

"With biking, I have a more reliable trip. With Metro, I could be stuck in a tunnel for 15 minutes,” one regular airport cyclist told the Times.

And of course there are the airports like Billy Bishop Toronto City (YTZ) that are walkable, not to mention bikeable, from downtown hotels and offices.

I, for one, intend to keep cycling to as many flights as I can at Washington National. I like getting the exercise, especially when I know that I will be sitting on a flight for the next few hours. Who knows, maybe I'll try running to the airport to catch a flight next.