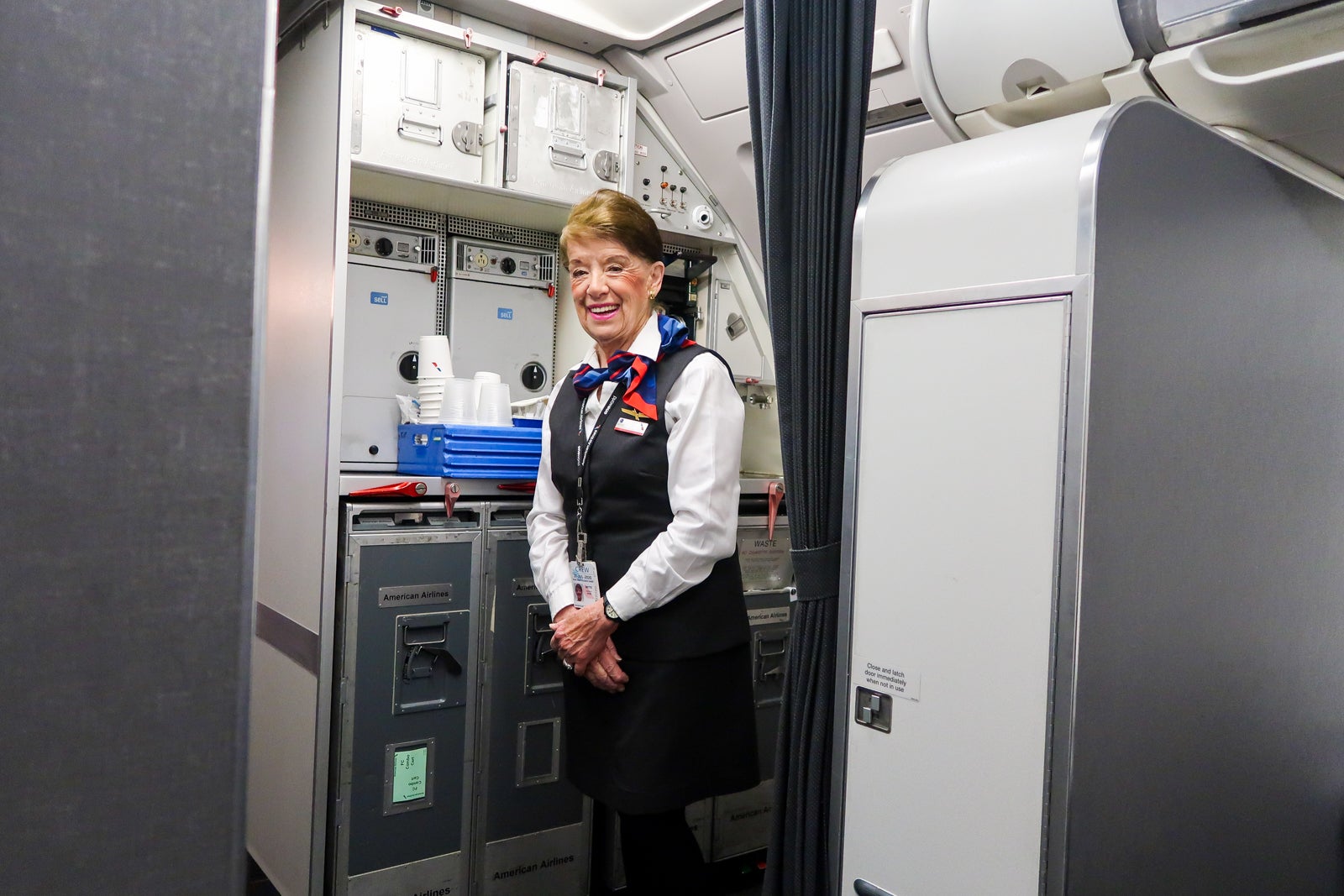 What It's Like to Fly With the World's Most Senior Flight Attendant
This post contains references to products from one or more of our advertisers. We may receive compensation when you click on links to those products. Terms apply to the offers listed on this page. For an explanation of our Advertising Policy, visit this page.

It's 6am on a Tuesday morning in DC, and a planeload of mostly-business travelers are slogging their way onto an American Airlines aircraft for the short flight to Boston. A bright-eyed flight attendant happily greets each passenger as they board, cracking jokes and complimenting shirt, shoes and bags.

"That's a cute top" elicits a smile from a weary passenger as she turns to head down the aisle. "She's very happy this morning... especially for 6:30 in the morning," the passenger mutters to me under her breath.

I got a chance to board our flight early to interview Bette. But our initial interaction was brief: she politely but firmly asked me to hold on for a few minutes while she finished the pre-flight briefing with her crew. That's because Bette goes by the book. As both her fellow crew this flight and the DC base manager would tell me, she works like someone just out of training.

She first emerged from training at Eastern Air Lines at the dawn of the jet age, starting with the airline in November 1957. Since then, she's served countless thousands of passengers and been through multiple rounds of airline mergers and acquisitions. She's gone from serving multi-course meals in the heyday of the 1960s to serving a basket of snacks on this short flight today. Yet, despite her experience and age, she still has energy and enthusiasm that you don't typically see from crew 60 years her junior.

There's no getting around it: At 83, it's hard to be in your top shape. So, I was curious to see Bette in action for myself, wondering if her fellow crew would work around her and she'd be more of a figurehead than a working flight attendant. That worry was thoroughly dismissed; Bette is still very much on top of her game.

After greeting passengers as they boarded, she hustled to serve each first-class passenger their choice of a pre-departure beverage, an increasing rarity on AA flights. Once in the air, she served us a couple more rounds of drinks and passed through the cabin multiple times with a snack basket.

But she didn't just work the first-class cabin. After making sure the passengers in the front two rows of this Airbus A319 were happy, she turned her attention to the main cabin. I tried to shadow her as she served economy, but kept needing to scramble out of her way as she'd head up to the front galley to get more coffee or hot water for tea.

All of this occurred on a flight that was in the air for just 55 minutes. In the moments that she was still, I peppered in a few questions.

As American Airlines' most-senior flight attendant, she could get whichever flight she bids on. So my first question was why she picks the 6:30am departure. Perhaps from years of working early flights, Bette said she wakes up shortly after 2am each morning. Also, the early flights are when she gets to see her regular commuters; she's become friends with many.

Where's her favorite place to go? Home, she only half-joked. While her passion and love for her job is obvious, she's happy at home. She doesn't fly as a passenger for leisure, even passing up the two free tickets that all AA employees received in 2017. This preference is understandable when you learn that Bette is a single parent to a son who has disabilities.

Bette's a veteran of the "Connie" (Lockheed Constellation), Lockheed Electras, Boeing 727s and DC-7s, airplanes that haven't flown in service for decades. She's currently certified on the Airbus A319, A320 and A321 and just recently got certified on the Embraer E-190. So, I had to ask her which was her favorite aircraft to work. She has fond memories of each one, she said, but the Boeing 727 and "Connie" stand out as her favorites.

Knowing that she's served Jackie Kennedy and many other famous passengers, I asked Bette who the most famous person she's had as a passenger. She showed no interest in name dropping, so she told me about her most memorable passenger instead. Decades ago, before the Americans with Disabilities Act, a passenger with severe disabilities was left at the gate with a boarding pass for their flight. The crew debated how to handle this situation. Bette wasn't going to leave one of her passengers behind, so she got him and his wheelchair down the aisle and to his seat. She recalled that he didn't have use of his hands, so she helped feed him.

It's a story that a pageant contestant might tell to win over the judges, but there wasn't an ounce of self aggrandizing in her telling this story. Instead, Bette's deep-rooted love for her passengers -- and humanity in general -- shone through. American Airlines marked Bette's 60th work anniversary by donating $10,000 to Sacred Heart Catholic Church Food Bank, an organization where Bette regularly volunteers.

Despite turning 83 on December 31, 2018, Bette isn't calling it quits anytime soon. She says she will keep working as long as her health is good and her mind is able. And she's not slowing down either; she currently works three trips a week. She's most often found on what's been dubbed the "Nash Dash" -- the American Airlines Shuttle route between DC and Boston. Bette knows this route well. After all, she's been flying it since Eastern Air Lines Shuttle launched the route in 1961.

For those hoping to fly with her themselves, she typically works Mondays, Tuesdays and Thursdays. But, she's taking a break from the DC-Boston route in May, flying between Washington Reagan and Fort Myers instead. She's not looking forward to having to work the Airbus A320 that's scheduled to fly this route as the former US Airways plane doesn't have power outlets or a closet for her to hang up passenger jackets.

After watching Bette brighten her passengers' moods one last time as they disembarked, I stuck around to chat a bit longer. The Boston-based cleaning crew boarded and cheers erupted as the cabin crew and the cleaning crew quickly embraced. It'd been a while since these two crews had seen each other, as the cleaning crew had been rotated around different gates of the airport. I learned that the two groups went back years. One of the cleaners -- a US diversity visa lottery winner from Albania -- referred to Bette and her crew as "our best friends, like family."

That interaction was emblematic. In an age where we are used to seeing our interactions with cabin crew as perfunctory at best and hostile at worst, Bette Nash was a breath of something different: humanity on board. Whether it's a top-tier Concierge Key commuting between DC and Boston or an aircraft cleaner, she showed kindness to all to go with her professionalism. Here's to many more years of that.

Related stories
Legislation that could gut credit card rewards set to move through Congress
Would you stay at 1 of these 8 haunted hotels this Halloween?
Southwest winter flash sale: Get one-way flights for as low as $29
You can currently buy points and miles with up to a 100% bonus — but should you?
Featured image by (Photo by JT Genter / The Points Guy)