Articles
Leslie Harvey is a mom of two children, ages 12 and 7, from the San Francisco Bay Area. She blogs at Trips With Tykes, is the co-host of the podcast Disney Deciphered and co-owns the Disneyland planning Facebook group, Disneyland with Kids.
Follow
May 31, 2019
•
11 min read 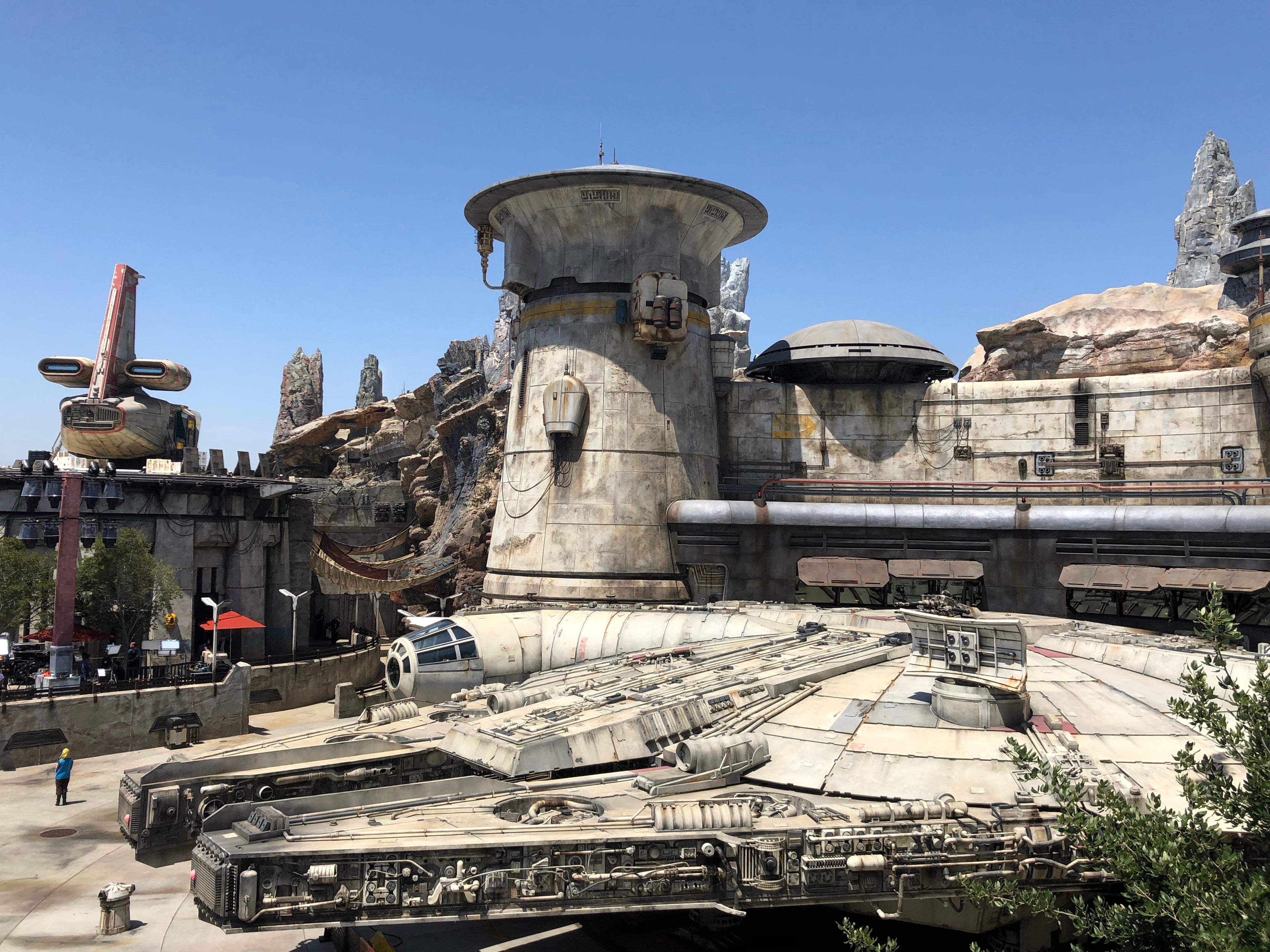 The most anticipated Disney opening in at least a couple of decades is happening today. Star Wars: Galaxy's Edge opens this morning at 8am at Disneyland in Anaheim, California. Every kid (and kid-at-heart) who dreamed of becoming a Jedi and battling the Dark Side, piloting the Millennium Falcon or building a lightsaber is about to be able to live their dreams.

The Essential Guide to Star Wars: Galaxy's Edge in Disneyland

The Points Guy was able to take a sneak peek into the new land the day before it opened to the public to try out the food, scope out the merchandise and hop aboard the Millennium Falcon. We'll have plenty of strategies and touring tips from the actual opening day coming very soon, but here are some first impressions of Star Wars: Galaxy's Edge as well as a video from the sneak preview event.

What is Star Wars: Galaxy's Edge?

Star Wars: Galaxy's Edge is a brand new land that just opened in Disneyland park on May 31, 2019. Disney will open a nearly identical equivalent on Aug. 29 in Disney's Hollywood Studios at Walt Disney World in Florida.

The land is set on the planet Batuu in a settlement called Black Spire Outpost. It's not a familiar destination from the original movies, but references to Black Spire are growing in the greater Star Wars universe.

With a theme park opening this talked about, the question on everyone's mind is undoubtedly crowds. (And TPG will have a full first-hand story on the real opening day rush later today.) Disney hopes to control some of the potential for craziness with a reservation system. From now until June 23, guests need a reserved time to enter the land.

While public reservations are fully booked, it's still possible to secure a reservation by booking a room at one of the three Disneyland on-property hotels. Guests at Disney's Grand Californian Hotel, Disney's Paradise Pier Hotel, or the Disneyland Hotel get a guaranteed four-hour window to access the land during their stay.

Starting on June 24, an advance reservation will no longer be necessary to enter Galaxy's Edge. Instead, Disneyland will implement a virtual queue through its official app to keep the land from getting too busy.

So what does the land look and feel like? If you've been to Pandora - The World of Avatar in Disney's Animal Kingdom in Florida, you probably have experienced how Disney Imagineers can take in-park theming to whole new heights.

Star Wars: Galaxy's Edge is at least as well-themed as Pandora, but is set in a destination where so many visitors will have a deep emotional connection. The word I heard repeatedly used to describe this new "planet" was "immersive." I've been to Disney many, many times, but just found myself saying "wow" over and over again. And I'm not even a Star Wars superfan.

Stepping into the land definitely feels like landing on another planet as every corner feels real. For example: Look closely and you'll spot droid tracks on the ground. (And yes, they used imprints from the actual R2D2 to make some of the tracks.) Or you might see a Resistance fighter hiding behind a corner as Stormtroopers pass by. It was so immersive in ways I had never seen before that I actually felt myself a bit disoriented leaving the land and re-entering the rest of Disneyland park when it was time to reluctantly depart.

But theme park goers don't just want to look at a beautiful backdrop. When it comes to a franchise like Star Wars, guests are expecting some epic thrill rides.

For now, there is only one ride operational in Galaxy's Edge. That ride is Millennium Falcon: Smugglers Run. Guests step aboard a full-size version of the Falcon where they can play one of three roles: pilot, gunner or engineer. The ride is different each time depending on how well everyone in the cockpit operates the vehicle. It's a little bit Star Tours and a little bit video game.

The queue is well-themed, just like Avatar Flight of Passage in Pandora. Guests hear from a realistic animatronic named Hondo Ohnaka who hires them for a smuggling mission aboard the Falcon. Then they enter a waiting area inside the Falcon itself for realistic photo opportunities before entering the cockpit.

The ride ultimately offers modest thrills. I tried all three positions and greatly preferred piloting the Falcon. Pilots get the most unobstructed view out of the cockpit and much more control over the ride operations. While the ride will offer a single rider line, it's going to be much more fun to have a cockpit full of friends or family all working together.

A second attraction is coming at some point in 2019, but the exact date is still to be determined. Star Wars - Rise of the Resistance is expected to be the more innovative and epic ride of the two attractions that will inhabit the land together. To be sure, I felt the lack of a second attraction in the land. Part of it feels a little empty for now.

The food offerings in Star Wars: Galaxy's Edge are extensive and contribute to the immersive theming. Visitors can try blue or green milk from the movies or dine on a variety of space meat.

I sampled five entrees and two desserts in the casual dining restaurant in Docking Bay 7, drank both blue and green milk, and snacked on a special popcorn concoction from Kat Saka's Kettle. And all of that wasn't even half of the menu items the land has to offer.

While I enjoyed quite a lot of the food I tried, some of the menu offerings might be a little too boundary-pushing for some visitors, particularly children. Two of the three kids meal choices in Docking Bay 7 would be a no-go with both of my kids. Check menus carefully before choosing where you are going to dine.

Star Wars merchandise has had enormous sales over several decades. So where could Disney possibly go from there? With $199 build-your-own lightsaber and $99 build-your-own droid choices in Galaxy's Edge, some might skeptically observe that Disney went with expensive.

To be sure, there are some pricy items for sale. It was clear to me that these are mainly meant for the superfans and collectors. Nevertheless, I marveled at many of these choices, even if there was no way I'd bring them home myself. Be sure to stop into Dok-Ondar's Den of Antiquities to see many of these unique collectibles on display.

Luckily, I also saw plenty of more modestly priced choices, many of which were pretty innovative. The stuffed porgs and wampas in the creature stall were cute and pretty irresistible. The $19.99 "hand-crafted" stuffed character dolls (of Yoda, Stormtroopers, Rey and many others) are a reasonablyn priced souvenir that many kids will love. There are also kid-friendly lightsabers at much lower price points than the build-your-own collectibles.

If you are looking for items that say "Star Wars" or "Galaxy's Edge," you won't find them in Black Spire Outpost. The merchandise for sale here is authentic to the planet Batuu. Disney is selling plenty of regular Star Wars-themed and branded merchandise available in other stores elsewhere in the parks.

Galaxy's Edge offers an awe-inspiring peek into the world of Star Wars. It's likely to appeal to both committed Star Wars fans who enjoy wearing Jedi robes and attending Star Wars related gatherings, as well as casual fans who have simply enjoyed a movie or two. While the land isn't quite finished with just one of two rides up and running, there's more than enough to explore, do, eat and buy to warrant planning a visit sooner rather than later.

(Here is information from the true grand opening day of Galaxy's Edge as well as some tips if you plan to visit the land.)

Read on for more Disneyland tips:

All images by author

Our points-obsessed staff uses a plethora of credit cards on a daily basis. If anyone on our team wouldn’t recommend it to a friend or a family member, we wouldn’t recommend it on The Points Guy either. Our opinions are our own, and have not been reviewed, approved, or endorsed by our advertising partners.
See all best card offers
Related stories
News
Hilarious all-new secret password will unlock bonus treats at Kimpton hotels this holiday season
Deals
Round-trip flights to Alaska starting at $157
Guide
5 apps to help you beat jet lag
Guide
How to check your business credit score