Our First Look Inside ANA's Hawaii-Bound Airbus A380 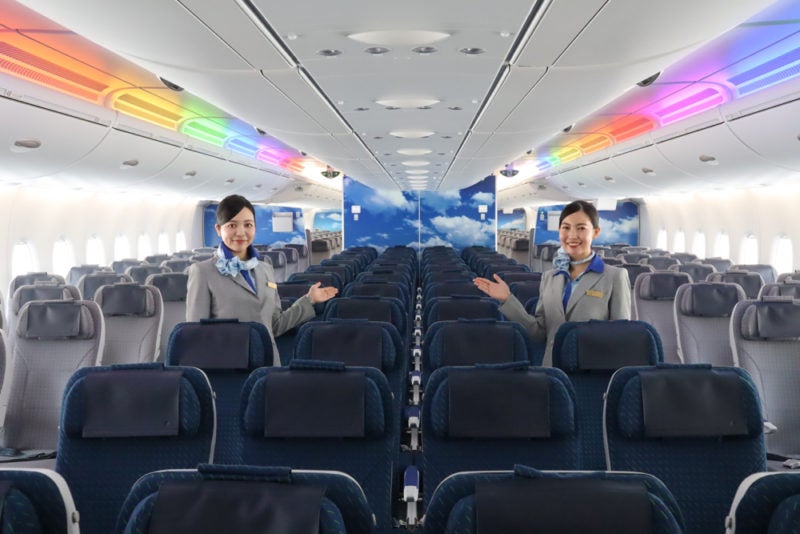 Our First Look Inside ANA's Hawaii-Bound Airbus A380
This post contains references to products from one or more of our advertisers. We may receive compensation when you click on links to those products. Terms apply to the offers listed on this page. For an explanation of our Advertising Policy, visit this page.

After months of anticipation, All Nippon Airways finally took delivery of its very first Airbus A380 in March, which will be used exclusively for flights between Tokyo and Honolulu. It was a bittersweet moment for the manufacturer — with no new orders on the books, as of now, it was the very last time Airbus delivered a superjumbo jet to a new customer.

And, in an unusual move, ANA didn't welcome journalists onboard for a tour — in fact, the first time any member of the public has had a chance to share photographs of the interior appears to be this week, when my buddy Sam Chui got to explore the new double-decker jet in Japan.

The final aircraft matches the layout we've expected since last year, with four proper cabins, consisting of 8 seats in first class, 56 in business and 73 in premium economy, all on the upper deck, and 383 in economy below, including a special section called "ANA COUCHii" in the rear, with economy seats that transform into a three- or four-seat bed, similar to Air New Zealand's Skycouch.

ANA completely redesigned its first-class cabin for the A380, with an entirely new product, complete with a sliding door and a 32-inch TV.

Like first class, business seats are arranged in a 1-2-1 configuration, so everyone gets direct access to the aisle. They're staggered, though, so some seats offer more privacy than others.

Located behind business class, premium-economy seats offer 38 inches of pitch and 15.6-inch in-flight entertainment systems. And, since these seats are on the upper deck, passengers at the window have access to a special storage compartment — especially useful for flyers seated in the bulkhead row.

Arranged in a 3-4-3 configuration, economy seats offer 34 inches of pitch, along with seat-back entertainment, power outlets and USB charging ports.

Sam says the ANA COUCHii section is ideal for families — there's even a special family powder room just behind.

Paid first-class fares are astronomically high, starting at a whopping $13,500 round-trip. Award tickets are a far better deal, but availability is incredibly limited — I only found seats to book near the end of the schedule, in February and March 2020, so you'll need to plan far in advance. Business-class awards don't appear to be available at all, though those fares are more reasonable, starting at $3,200 round-trip.

Hopefully more award space will open up over the weeks and months to come — we dig into all of your redemption options right here, including the following programs and round-trip rates:

If you do manage to find availability, it may be possible to route through Honolulu from the mainland US to Asia, giving you an opportunity to experience the A380 for the same number of miles as a nonstop flight to Japan:

We'll be back with many more photos after ANA's A380 launch at the end of May, but head on over to Sam's site for a closer look right now.