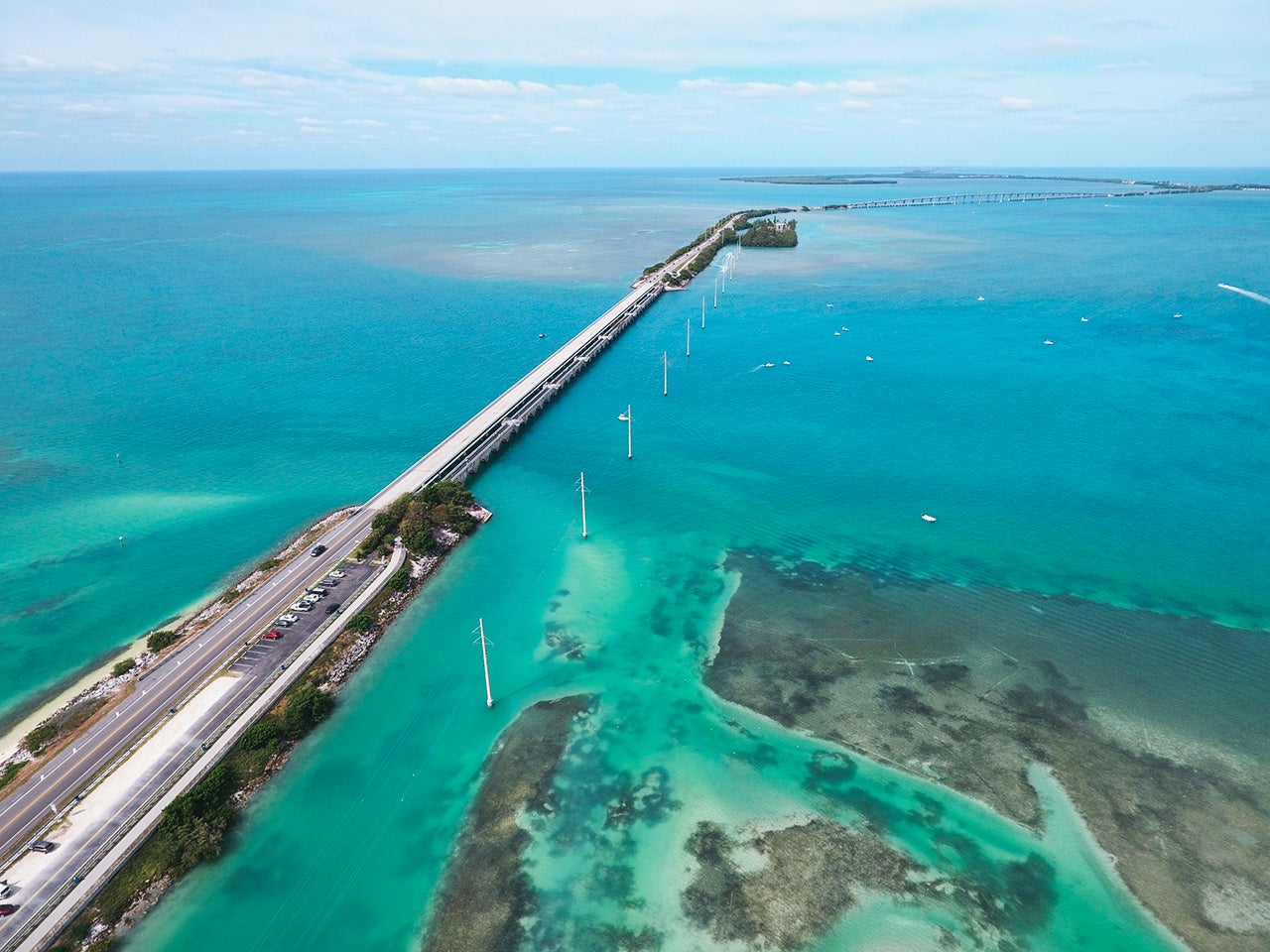 No mode of travel is more American than the road trip. It's a national rite of passage. Dating back to Model T days, folks have been hitting the wide-open road to explore every nook and cranny of the 3,000 miles that lie between sea to shining sea. From mountain roads with hairpin turns to stunning seaside escapes to good ol' Americana history, here are epic five road trips through the United States.

This appropriately titled highway crosses over the turquoise waters that separate the Atlantic Ocean from the Gulf of Mexico with a series of 42 bridges including the iconic Seven Mile, which hovers over Pigeon Key. However, the incredible cerulean panoramas aren't the only sight worth seeing on this 100-mile journey. The road is lined with palms and native flora, retro motels, shell shops and an impressive array of fauna (including the Key's small namesake deer). The drive takes about four hours round-trip starting from Florida City. Make it a longer vacation by starting the trip in Miami, then stopping by Homestead for a trip to the Everglades National Park, Knaus Berry Farm (in season) for cinnamon rolls and the Robert is Here fruit stand for tropical provisions and smoothies, before slowly meandering down the coral cay archipelago to Key West.

Related: Getting to Miami on points and miles

In the 1940s and 50s, the 2,500-mile stretch of road from Chicago to Santa Monica, California, was the American road trip. That changed with the development of the interstate system, which rerouted large portions of the highway to larger interstates. Even so, tourists from around the globe still follow the famous path (or at least sections of it) past vintage neon signs, retro roadside motels, multiple national parks including the Petrified Forest and the Grand Canyon, as well as kitschy Americana stops such as the World's Largest Catsup Bottle in Collinsville, Illinois, and cool art installations such as Cadillac Ranch in Amarillo, Texas, a 12-minute drive from the killer brisket at Tyler's Barbecue. The section of road that lies next to I-40 through New Mexico and Arizona is particularly picturesque.

There's a big debate on the official start and endpoint of the PCH. Some say it runs down Highway One from Mendocino County in the north to Orange County in the south. Others say it runs the length of the entire West Coast. According to the California Department of Transportation, the highway officially starts at Dana Point in Orange County and stops in Oxnard. Intrepid road trippers should drive the whole damn road. The 1,650-miles from San Diego to Olympia National Park in Washington passes through a range of ecosystems, including rainforests, deserts and dramatic cliffs hanging over the churning Pacific. And there's no better time than the present.

Spanning 469 miles from Shenandoah National Park in Virginia to the Great Smoky Mountains National Park in North Carolina, this stunning parkway winds its way through the forested peaks that belong to some of the oldest mountains in the world. The area is lush and green through the spring and summer months, but the road is most spectacular in autumn when the rolling landscape is painted with fiery shades of red, yellow and orange, usually at its crest late-October to mid-November. Make sure to plan a stop in Asheville along the way: The mountain town is considered one of the top food and craft beer destinations in the Southeast.

Related: The essential guide to renting a cabin in the Great Smoky Mountains

Far less famous than Route 66 but just as gorgeous, Route 89 is sometimes called the National Park to Park Highway. Truly ambitious road warriors can take the road less traveled by starting in Arizona, moving through Utah and up to Wyoming and Montana. The highway passes 150 towns, cities and reservations (the cultural component of the trip), seven national parks (including the Grand Canyon, Glacier and Yellowstone) and three giant geographic regions (Basin and Range, Colorado Plateau and the Rockies). While going from border to border would certainly reach bucket list status, a shorter Jackson Hole-Grand Teton-Yellowstone-Glacier National Park trip could still make for an unforgettable expedition.