Christmas came early: My 3 nights in the 'Elf' suite

Articles
Carissa Rawson is a Points and Miles Reporter at TPG, helping readers get to where they need to go, faster (and cheaper). You can find her in your nearest Priority Pass lounge, sipping free coffee and obsessively researching travel.
Dec. 12, 2019
•
7 min read 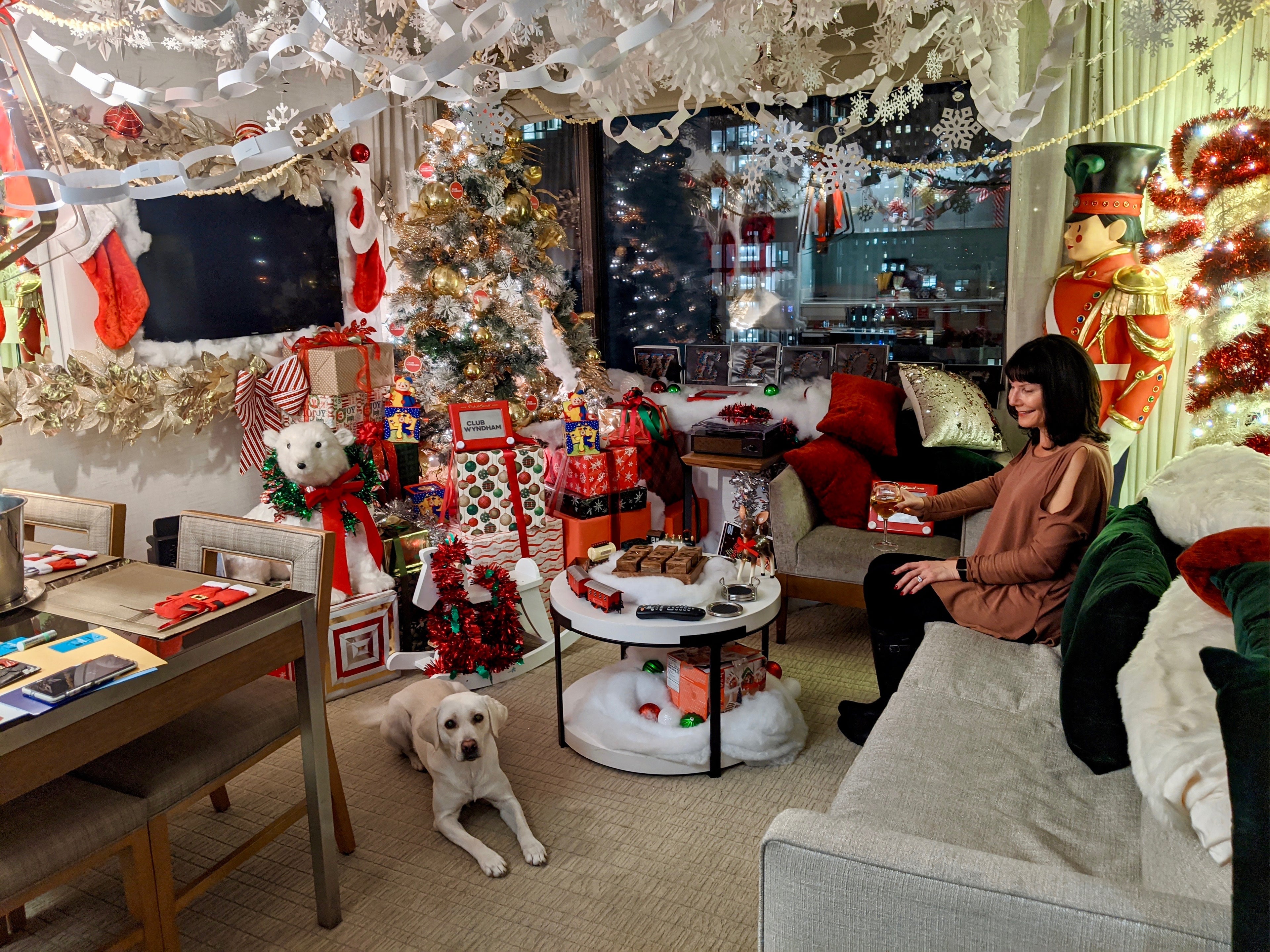 Christmas came early: My 3 nights in the 'Elf' suite
This post contains references to products from one or more of our advertisers. We may receive compensation when you click on links to those products. Terms apply to the offers listed on this page. For an explanation of our Advertising Policy, visit this page.

Oh, hello, you're probably here about the story.

Sit down, and let me pour you a cup of cocoa with marshmallows and peppermints while we share the tale of the most Christmas-y room in all of New York City.

This is the story of how a young "Elf"-obsessed woman flew all the way to the magical land of New York to experience serious Christmas cheer in the form of the Elf-themed suite at Wyndham Midtown 45 at New York City. (This is Elf as in the 2003 movie starring Will Ferrell as an oversized North Pole elf who comes to the Big Apple. Haven't seen it? Stop reading right now and watch it before you continue with this story. We'll wait.)

The Elf-themed suite was a pretty much guaranteed way to jump-start some holiday cheer. It was only available for a few nights this year and sold out in seconds. However, I kept checking availability, and luck was on my side to ultimately snag three nights that became available.

I prepped for my stay by marathoning the "Elf"movie -- at home, in public, at work, on the plane -- you name it, I watched it, protestations from my family aside.

The day of my stay finally came, and I passed through the seven levels of the candy cane forest, through the sea of swirly-twirly gumdrops, and straight through the Lincoln Tunnel into my hotel wonderland.

When checking in, we went to the normal check-in line, which was a cotton-headed ninny muggins move since the regular agents were not in the loop on the Elf suite. A woman dressed in elf attire was actually there to check us in and provide some complimentary tickets to both the Empire State Building and Rockefeller Center.

As for the room ... it was every inch as amazing as I hoped.

Inside the room there was a decorated tree, wrapped presents, toys, cut-out snowflakes, tinsel, bows, a life-size toy soldier, rolls of cookie dough and more. The Elf suite was "extra" in all the best ways, at least for those who want to live in the world of Buddy the Elf.

In fact, it was almost unbelievable, so we'll let the photos do a bit of the talking.

The kitchen was fully stocked with the four main food groups. As per Buddy the Elf, those food groups consist of candy, candy canes, candy corn and syrup. Check, check, check and check.

And although I too share an affinity for elf culture, my attempts to build a gingerbread house were about as successful as Will Ferrell's character Buddy's Etch-A-Sketch building endeavors.

Despite my disastrous attempts at gingerbread construction, I was in high spirits. Why? I just like to smile. Smiling's my favorite! Or, at least that's what the mirror said. Honestly, how could you not smile when surrounded by holiday magic?

Of course, the gift bags that were left for us certainly didn't hurt with the high spirits. They were filled with ornaments, Pop-Tarts, and an Etch A Sketch.

And although Walter Hobbs was nowhere to be found during our journey to the Empire State Building, I did get a pretty sweet picture with my service dog at roughly the same altitude where Santa's sleigh flies.

All jokes aside, we heard Santa was coming to Macy's Santaland, so we made reservations to see the big man himself and raced right over.

In total, we spent three magical nights at the Elf Suite among the fluttering paper snowflakes, crunchy debris of our failed gingerbread house attempts and the dulcet tones of Bing Crosby's "White Christmas" on vinyl.

The Elf suite wasn't cheap with rates advertised to start at $399 per night, though rates for our nights came in higher. Theoretically, the hotel is bookable for 30,000 Wyndham Rewards points per night.

If you missed out on this suite, here are our other holiday recs in NYC, our favorite points hotels in NYC and some NYC spots to fill your belly for when the syrup and candy canes run out.

Ahhhh ... it's a wonderful life indeed.