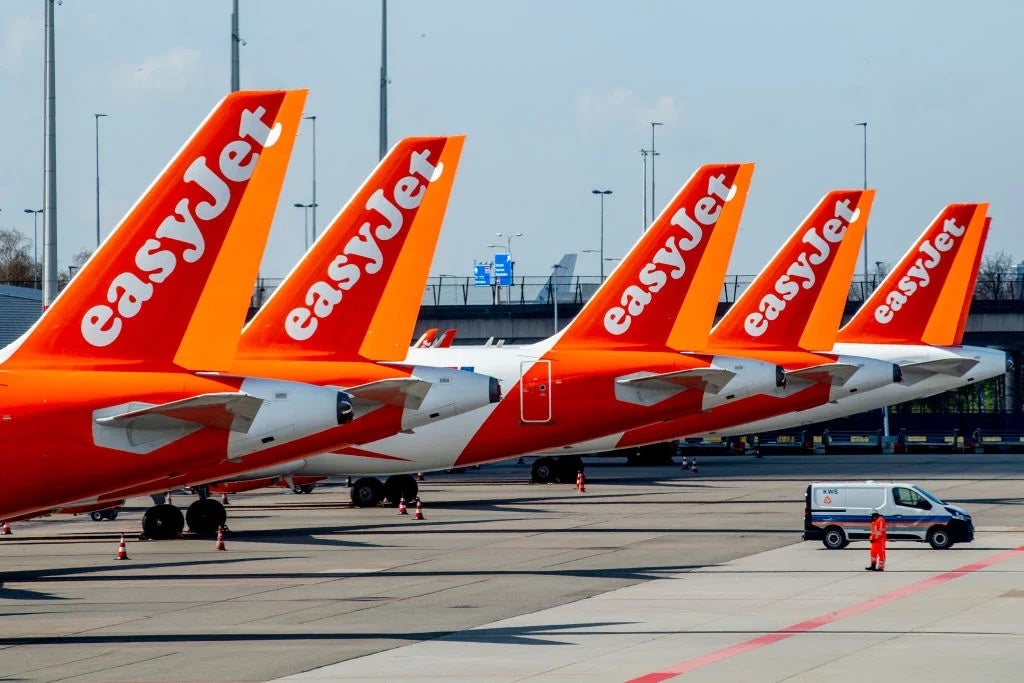 Airlines have made no secret of the chronic staffing crisis that has left the UK's air-travel industry in disarray.

The problem is currently so dire that one carrier has resorted to removing seats from its planes while another has asked passengers to start bringing their own food for flights.

For more news delivered each morning to your inbox, sign up for TPG daily newsletter.

Since the summer vacation flight schedule kicked in last month, airports and airlines have creaked under the weight of a surge in demand as vacation goers scramble to get away after two years of travel restrictions.

Operators are blaming staff shortages for the issues, as they struggle to refill the thousands of roles left vacant due to the pandemic.

Not so easy, jet

One of the worst-affected airlines in recent weeks has been easyJet.

The budget carrier has announced it will remove some seats from its A319 aircraft this summer, so the planes can operate with three instead of four cabin crew members.

This helps the airline get around the Civil Aviation Authority rules which state that airlines must have one air steward for every 50 seats, regardless of whether those seats are filled or not.

Related: Everything you need to know about flying EasyJet

Normally, easyJet’s A319’s are packed with 156 seats, requiring four cabin crew members. But by stripping out the back six seats, thereby reducing the aircraft’s capacity to 150, the airline can operate the planes with just three attendants.

“This is an effective way of operating our fleet while building additional resilience and flexibility into our operation this summer where we expect to be back to near 2019 levels of flying,” the company said. They added that the last six seats are usually booked on the final days of departure, so vacation-goers’ summer travel plans will not be affected.

Bitten off more than you can Tui?

Meanwhile, Tui Airways has advised passengers on some flights to bring their own food due to the carrier's catering issues.

The operator blamed a staff shortage at its catering supplier for the measure, before offering an embarrassing apology to customers.

Related: A complete guide to the 6-month passport validity rule

“We can confirm that unfortunately due to staff shortages with our catering supplier, there may be limited food and drinks services available on board,” Tui UK and Ireland said.

“Customers may therefore want to bring their own food and soft drinks onboard – no alcohol permitted. Any soft drinks over 100ml will need to be purchased after you have passed through security.”

Related: Planes, Trains and a Bus: We Raced from NYC to DC to Find Which Was Fastest

Flights from the following airports are due to be affected:

The disruption will not affect its long-haul flights to Aruba, Costa Rica, Cuba, Dominican Republic, Jamaica, Mexico, Orlando and St. Lucia, the company said; they promise meals on these flights will continue as normal.

“Please be assured we are continuously monitoring the situation and working closely with our suppliers to limit the impact to the onboard service for our customers,” the operator added. “We are directly contacting all customers impacted. We’re very sorry for any inconvenience caused.”

Recap: Why so many issues?

When the pandemic brought the aviation industry to a standstill, thousands of airport and airline employees lost their jobs across the country.

One trade union source told TPG in April that many of these workers found jobs in other industries and were quickly seduced by the same — or better — wages for more sociable hours.

So when airports and airlines asked old staff to come back as the industry regained, many refused.

“Why would you leave a nice nine-to-five job in town for your old airport job, that pays the same and starts at 3 a.m.?” the source told TPG. “There needs to be a better incentive.”

Airports and airlines, however, have blamed the government for their problems.

They say one of the main issues for the crisis is the time it takes to pass new recruits through the industry’s stringent anti-terror vetting process.

A Heathrow Airport spokesperson told TPG that this process can take anywhere between three and six months, “from recruitment to starting work”.

Advantage Travel Partnership CEO Julia Lo Bue-Said told the BBC a “dire labour shortage” in the sector was one of many reasons behind the issues. She called it a "travesty" that easyJet was removing seats from flights, adding: "This only exacerbates the issue of meeting consumer demand to travel."

The staff shortages, combined with a huge backlog in U.S. passport applications, means many Americans could be in for a chaotic summer of travel this year.

Related stories
1st look: American Airlines, British Airways unveil 3 gorgeous lounges in JFK's Terminal 8
Icelandair adds Detroit as newest US route
Frontier Airlines' unlimited all-you-can-fly pass now valid for kids, includes $200 flight credit
Here are the best Travel Tuesday flight deals
Featured image by SCHIPHOL, NETHERLANDS - 2020/04/02: EasyJet aircrafts parked at an empty Schiphol Airport. Closed gates and departure halls at Schiphol airport during times of the coronavirus threats. The airport is shrinking what the airport itself calls Kern-Schiphol. This means that facilities for leaving passengers will continue in a slimmed-down form. (Photo by Robin Utrecht/SOPA Images/LightRocket via Getty Images)
Editorial disclaimer: Opinions expressed here are the author’s alone, not those of any bank, credit card issuer, airline or hotel chain, and have not been reviewed, approved or otherwise endorsed by any of these entities.