I flew the new Eastern Airlines inaugural flight. Here’s why I won’t fly them again. 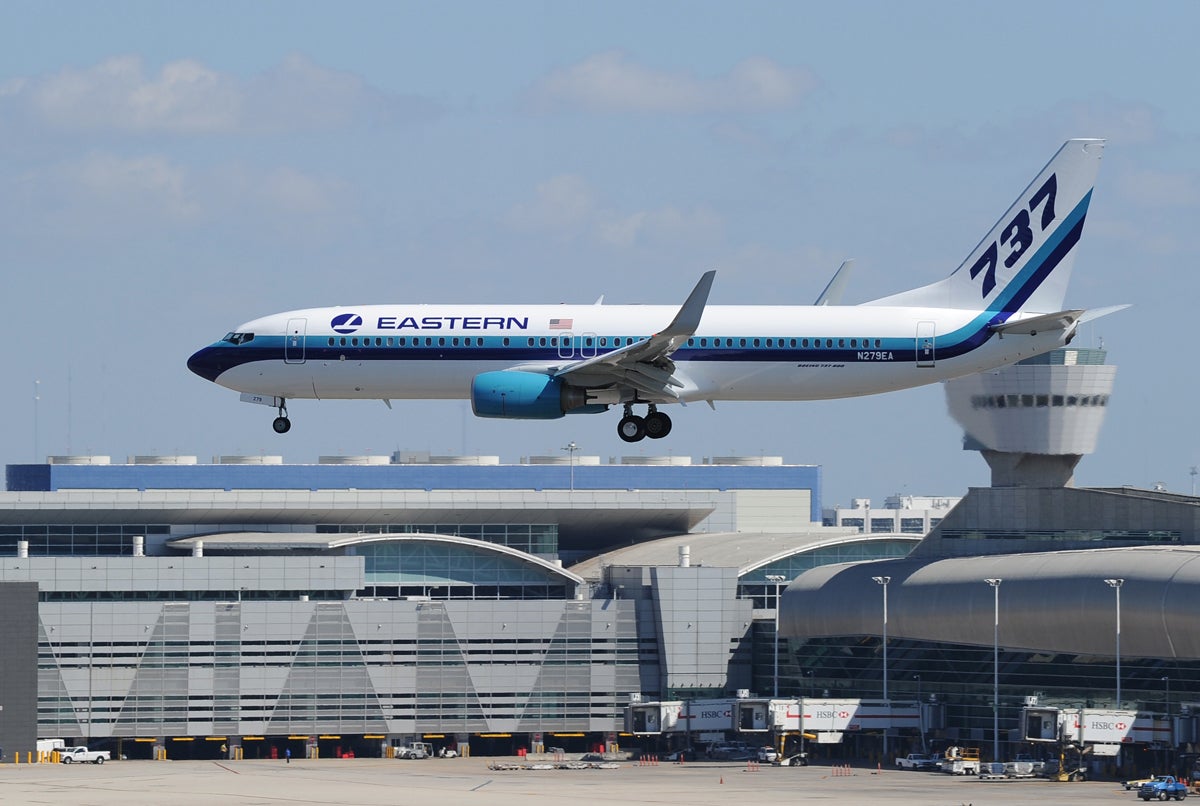 I flew the new Eastern Airlines inaugural flight. Here’s why I won’t fly them again.
This post contains references to products from one or more of our advertisers. We may receive compensation when you click on links to those products. Terms apply to the offers listed on this page. For an explanation of our Advertising Policy, visit this page.

As TPG's Alberto Riva wrote last week, Eastern Air Lines was one of the most renowned airlines in the world. In the 1980s it was the biggest airline outside the Soviet Union by passengers carried.

The former Eastern Air Lines (note the space) went bankrupt before I was born, in 1991. The last time the world heard of Eastern, George H.W. Bush was president, the first Gulf War was still going on and TSA PreCheck didn't exist. Then it came back, in 2015, and lasted a couple of years.

Now it's back again, with the Eastern name but with no connection to the giant that went bust in the '90s.

Related: Eastern Air Lines is returning, again. Will it last?

Eastern Airlines (no space) recently announced it would resume service with a new nonstop route between New York JFK and Guayaquil, Ecuador (GYE). The news prompted discussions around the TPG office, with staffers reminiscing about the glory days of the first Eastern and discussing whether this new reincarnation had the legs to succeed.

A business plan focused on low-yielding destinations in South America, where U.S. and South American airlines already offer plenty of flights, had us discussing the airline's chances, in particular. Wanting to see for ourselves, we booked a ticket on the inaugural flight from New York, scheduled for Monday.

If you're expecting to read a nostalgic story, waxing poetic about the new and improved Eastern Airlines, you won't find that in this piece. New-airline kinks aside, that was not my experience. Here's how it went.

I arrived for my 12:30 a.m. flight around 8:40 p.m. — early, but I wanted to get as any details as possible. There was no trace of Eastern on the monitors at JFK's Terminal 4, although flights departing around the same time or even later than 12:30a.m. were already listed on them.

The lack of signage or anything resembling an Eastern logo (old or new) was disconcerting. I wandered around the terminal, looking for the check-in counter. Most airport workers I spoke to had never even heard of Eastern and told me to go to the China Eastern counter, which is in Terminal 1.

Eastern doesn't give you the ability to check-in online, only pick your seats. I figured if I arrived early enough, I'd be able to check in and grab a bite to eat at the Air India lounge, thanks to my Priority Pass access, with enough time for any festivities the airline might have planned for its inaugural scheduled flight. (It also flies charters.)

Fearing that the airline might cancel my flight or somehow go under, I booked the $474 one-way ticket in premium class using my Chase Sapphire Preferred Card.

Related: What Card Should I Use During a Trip Delay, Cancellation or Interruption?

After aimlessly wandering for a few more minutes, I spotted some airport workers occupying a check-in area beside Etihad's counters in row 9. I found a couple who looked just as lost as I did, also looking for the Eastern check-in counter, and we wandered in that direction. After hearing, "are you here for Eastern?" I could finally breathe a sigh of relief.

Shortly after, a queue of similarly confused Eastern travelers began to form. Finally, the new Eastern logo appeared on the screens, and the ticket agents began to welcome customers.

Check-in was easy — for me. First in line, I presented my passport and was issued a boarding pass. But I noticed that none of the ticket agents appeared to speak Spanish, which posed a significant language barrier for the majority of customers, who were Ecuadorian. Beside me at the check-in counter, I saw an agent struggling to explain to a couple who'd been behind me in line that their bags were overweight. This went on for a few seconds until the couple's son finally stepped in and translated.

It's an oversight, but a big one in my opinion as there's no excuse not to have workers who speak the language working with customers. I certainly didn't expect this from such a storied airline.

There was no mention of the new(ish) airline, or that this was the first Eastern scheduled flight between the two cities. None of the employees were dressed in anything that would have designated them as Eastern personnel or working for Eastern that night. After getting my boarding pass, I hung around the counter for a few more minutes hoping to hear somebody from the airline or airport give a few remarks about the launch. I gave it a few minutes and, with no statements coming, decided to head to my gate, A5.

As Eastern just relaunched, it doesn't participate in TSA PreCheck. It's been years since I've waited in a non-PreCheck line, and it took about 20 minutes to finally clear security.

At around 10:45 p.m., as I waited at the gate, a fellow passenger told me to look at the monitor, and my heart sank. Our 12:30 a.m. departure time had been delayed until 2:30 a.m. There was also nobody from the airline at the gate, so passengers were confused and understandably frustrated.

Muffling a yawn, I sent a Slack message to my editors to inform them of the delays. The first question they asked in reply was, "Is the plane there?" Luckily, the Eastern Boeing 767 was at the gate, and I could see people moving about in the cockpit, so I figured it was just an unexpected delay.

Around midnight, a gate agent told us our 2:30 a.m. departure had been pushed up to 2:00 a.m. Not much better, but at least we were getting some communication from the airline. Finally, at 2:27 a.m., we were ready to board.

The gate agent started to announce boarding groups before another agent stopped her. The flight was almost completely empty (more on that later), so she then called for everyone to board. With a cheerful "you guys will have the whole plane to yourselves!" I made my way aboard.

I mentioned this above, but I was astonished that the airline didn't make a show of this flight being the inaugural. Other airlines have pulled all the stops, including ribbon-cutting and speeches, for even domestic routes. Nobody seemed to be that interested, and the AvGeek in me was pretty disappointed.

The only way one would have known that this was the first flight from New York was on the jet bridge while walking to the plane. There, a worker handed passengers a card — produced by the company that operates the terminal, not the airline — commemorating the flight along with a baggage tag. A nice touch, but I would've appreciated if the airline had done something more.

This is not a full review of the cabin, but I want to point out a few things about the experience. Business class on this Boeing 767 was arranged in a 2-2-2 configuration; the plane was a 29-year old Boeing 767-300ER registered N706KW. It came from the fleet of Dynamic Airways, the airline that bought the rights to the Eastern name and logo and rebranded itself as Eastern.

The recliner seats in premium class were comfortable, in a way that the recliner at your grandma's house might be. It took a few minutes to figure out how to recline the seat, but once in lounge mode, I was pretty comfortable during the flight.

The 767 had 30 premium and 212 economy seats, but including myself and a dog, there were roughly a dozen people on this flight. Everyone could have sat in business class if they'd wanted. Eastern plans to fly from New York to Guayaquil once a week, and to add flights to Guyana later this year. With those plans, I'm not entirely sure how the airline can make a profit flying an empty plane to South America.

The 29-year-old bird looked like it hadn't been refreshed since entering service. Truthfully I expected an overhaul of the cabin, including the livery on the fuselage, which was unchanged from the previous, 2015 Eastern.

Shortly after boarding, which took precisely five minutes given the lack of passengers, a flight attendant came through the business cabin with glasses of sparkling wine. It was really sweet but a nice touch.

After bags had been loaded, I expected to take off, but we sat at the gate for an additional two hours after boarding with little information from the flight deck. Finally, the captain said we had been held up from "paperwork," and we pushed back around 4 a.m.

The flight itself was uneventful but didn't feel particularly premium. Meal service began roughly two hours after takeoff, and I munched on a disappointing omelet and potato plate. The orange juice and fruit cup reminded me of elementary school lunches, but as it was the only option, I scarfed it down. Along with a glass of water, this was the only meal service of the six and a half hour flight.

The flight attendants, while friendly, seemed to be a bit overwhelmed and untrained but were on-hand for in-flight requests.

Upon landing, we were greeted by a water cannon salute, which is customary on inaugural flights. But again, no mention of it from the crew.

The entire experience, to me, felt like a start-up still in its infancy that wasn't quite ready to launch. The airline hired a marketing firm to handle its branding needs, but that hasn't translated yet to its in-air or ground experience.

I was also a little confused about its Latin American strategy. LATAM already offers nonstop service between New York and Guayaquil, with lie-flat business class seats. You can also fly nonstop between Miami (MIA) and Guayaquil on American.

I'm not entirely sure what Eastern is going for with its marketing strategy. Does it want to be the next great start-up airline, like JetBlue, or a budget airline like Spirit? With other, more established airlines offering nonstop, I don't know how it expects to turn a profit. Either way, it won't be my choice to South America again.

This story has been updated with further details on the airplane and airline; the headline has been changed.