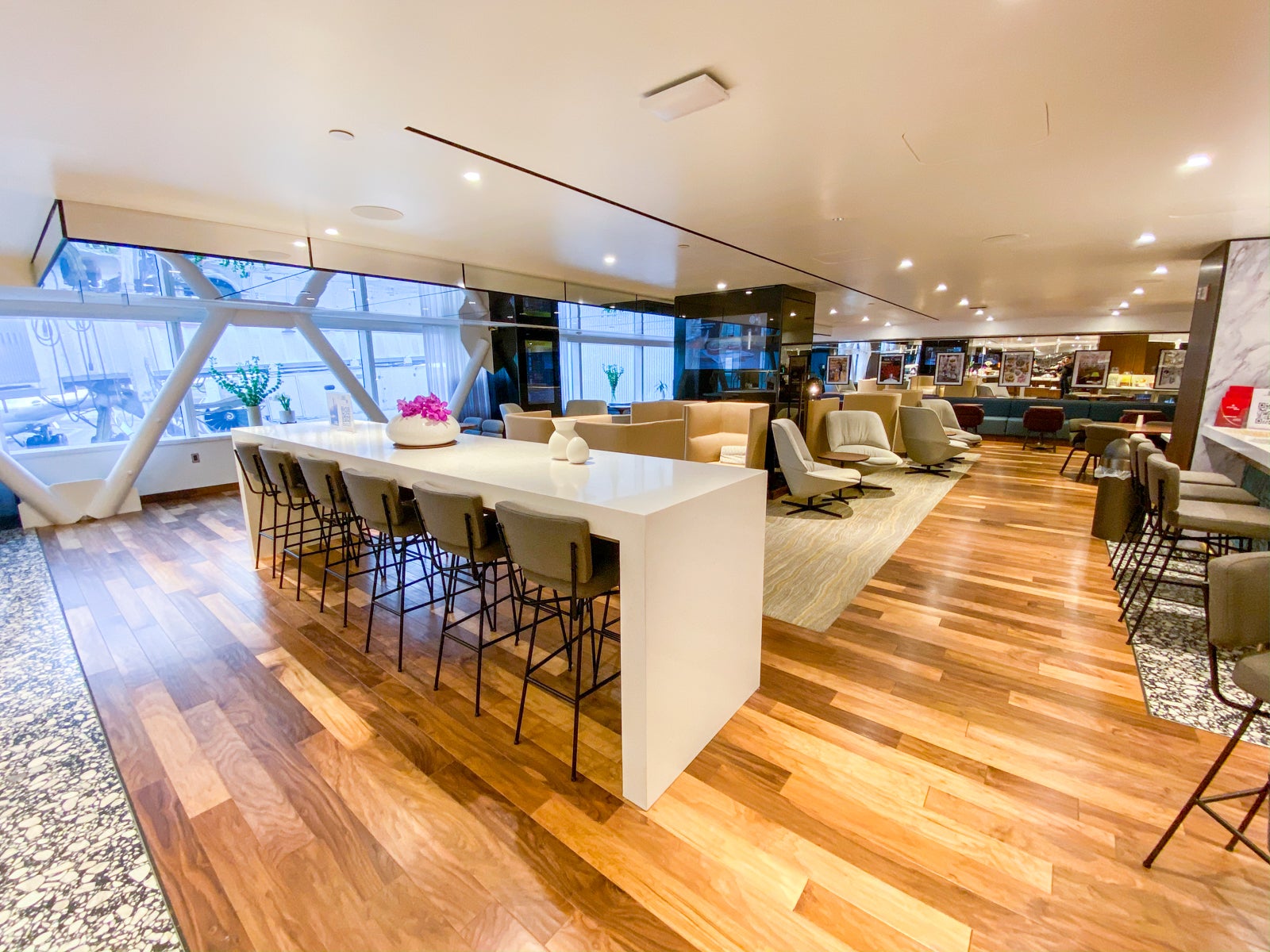 2 new lounges at JFK are now accepting Priority Pass members
This post contains references to products from one or more of our advertisers. We may receive compensation when you click on links to those products. Terms apply to the offers listed on this page. For an explanation of our Advertising Policy, visit this page.

RELATED: Sign up for TPG's daily email newsletter to learn more about maximizing your travel

In addition to Priority Pass customers, the lounges will also welcome premium-cabin customers of certain airlines. At the moment, the Primeclass lounge in Terminal 1 is welcoming Cayman Airways passengers, while the Terminal 4 lounge is welcoming Air India and Egypt Air customers.

Children under six enter the lounge for free, and you’ll receive two drink vouchers when entering the lounge. Note that Priority Pass holders are limited to a four-hour maximum stay. You can bring guests into the lounge depending on which Priority Pass membership you have.

I flew through Terminal 1 a few weeks ago and had the opportunity to check out what’s in store for Priority Pass members. Since I wasn’t flying Cayman Airways and the lounge doesn’t yet accept Priority Pass, I paid $59 to enter.

The nondescript entrance to the lounge is located all the way at the end of the main pier of Terminal 1, in between Gates 10 and 11.

There's a small entrance lobby with reception desk on the departure level of the terminal, and the rest of the lounge is located down one flight of stairs.

Immediately upon entering the lounge, you’re greeted by the bar. Each of the drink vouchers can be used for any of the liquors on a menu that’s specifically for use with drink vouchers.

Although the bar has a pretty extensive selection of spirits and liquor, the menu for use with drink vouchers was noticeably bare-bones. (And poorly written, including misspellings of "chardonnay" and "Sangiovese".)

There weren't many cocktails listed, but the bartender was happy to make custom cocktails upon request.

The bar also has seven wines and three beers on tap, and each pour requires a drink voucher.

In a nook just to the right of the bar was the small business center and printer. There were three HP computers that looked brand new.

There were also a few seats next to the business center, in case the main lounge area is crowded.

The long buffet began just across from the bar. The food selection was quite good for what's ultimately a contract lounge. There were two soups, though only one was labeled (potato leek).

The rest of the buffet featured three hot dishes, some breads and a colorful fruit and salad bar. All the food I tried was quite fresh and tasty.

The fusilli vodka pasta may not have been the most gourmet, but it certainly hit the spot after spending hours in traffic getting to JFK.

Right next to the bar was a high-top table with lots of counter seating.

The rest of the seating area alternated between tables and comfortable swivel and high-back lounge chairs.

Behind the bar was an L-shaped counter with various light foods and non-alcoholic drinks. There were a few hard fruits, some mixed nuts, cans of Coke-branded sodas, 8-ounce bottles of Poland Spring and a two proper WMF coffee machines.

The lounge had three unisex restroom stalls, and one stall had a shower. For a lounge with the capacity to hold 202 people, I think three individual stalls is way too few. I've got to imagine there will be a wait when the lounge is at capacity.

The bathroom stall with the shower was the largest, but the other two stalls were also nicely sized and well appointed.

The lounge is so new that they haven't even filled the shower toiletry containers.

I really loved the design of the lounge, especially the contrast between the dark wood tones and the vibrant yellow accents from the carpet.

Furthermore, the hanging posters of The New Yorker magazine covers added a local flair to the lounge.

There was also relaxing background music playing throughout the lounge that made me feel like I was getting drinks at a fancy country club, not getting ready to board a long-haul flight.

As you'd hope for a brand-new lounge, there was plenty of power and USB outlets. Each outlet around the lounge had two AC outlets, as well as two USB ports. Unfortunately, the outlet wasn't wide or long enough to fit both a MacBook charger and an iPhone USB cable, but at least there were plenty of outlets!

Wi-Fi required logging in on a landing page with a provided username and password. The Wi-Fi worked quite well, but wasn't fast enough to upload photos to the cloud. A Speedtest returned just 4.66Mbps of download speed and 4.95 upload.

The opening of two brand-new lounges at JFK is great news for frequent travelers. Now that both lounges have opened to Priority Pass members, it’ll be interesting to see how crowded they get. Regardless, I’m always a fan of having more choices, so I’m thrilled to report that these new lounges have officially joined Priority Pass.

Related: Choose this, not that: JFK Priority Pass lounge edition