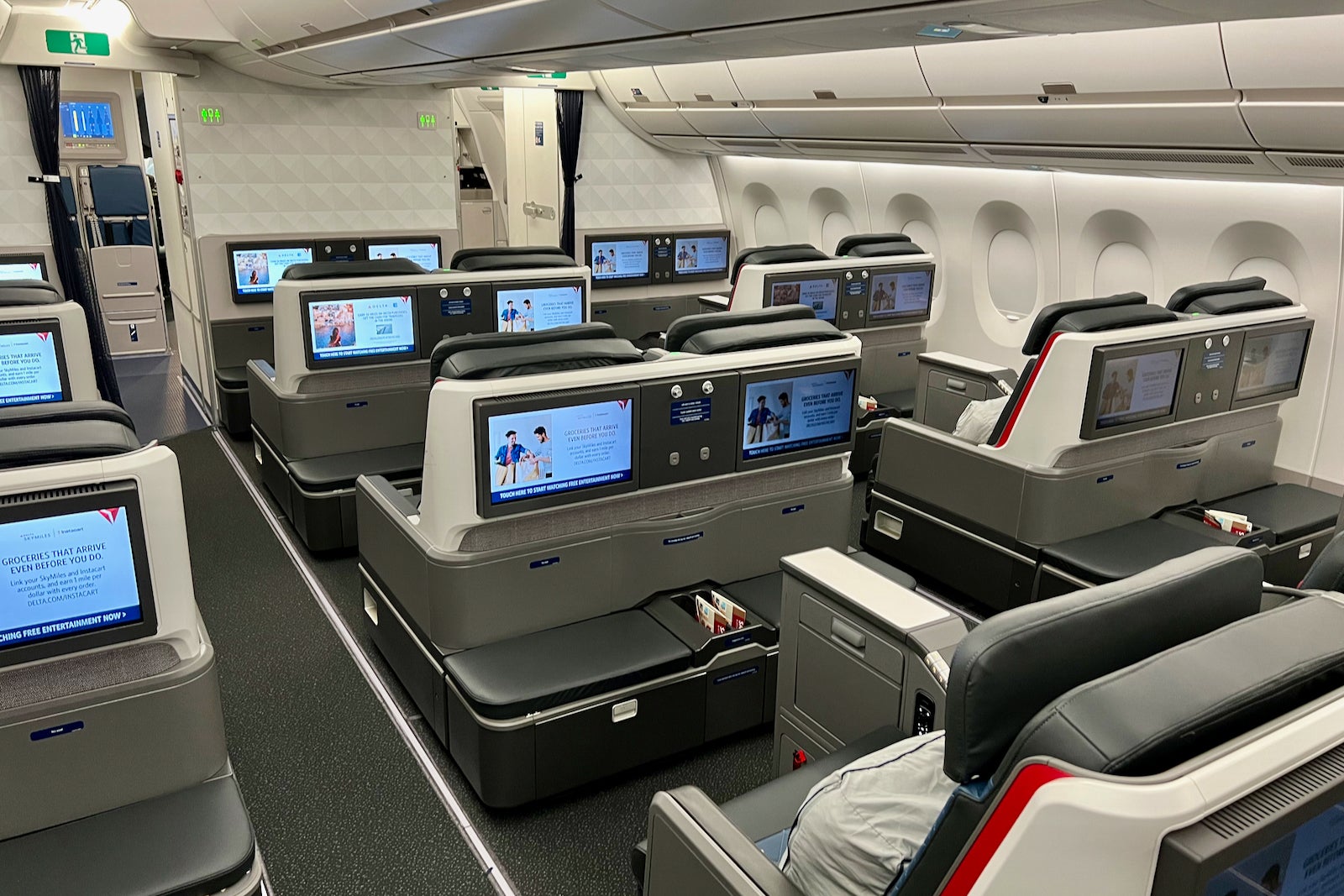 When Delta announced plans to acquire some used Airbus A350s last year, the carrier was tight-lipped about the cabin configuration.

Would the planes be reconfigured with Delta's signature business-class suites and Premium Select cabins or would the widebodies retain their previous configuration?

In this case, the nine A350-900s came from LATAM, the bankrupt South American mega-carrier in which Delta owns a stake. LATAM's A350s featured an older-style business-class product. Plus, they didn't have a premium economy cabin.

Turns out, Delta was in a rush to get these planes in the sky to capitalize on the surge in international travel demand. Having retired its 18 Boeing 777s early on in the pandemic, the nine additional A350s will give Delta extra capacity to boost its summer schedule (and beyond).

So, instead of a retrofit, Delta kept the legacy LATAM cabins but gave them a nose-to-tail refurbishment. Aside from the unique cabin configuration, you wouldn't know that you stepped foot on a "used" Airbus A350 that once flew for LATAM.

That said, I was still hesitant for my first flight on the ex-LATAM A350. After all, Delta One Suites set a high bar as one of the best business-class products in the U.S.

How could the legacy LATAM product even come close?

Well, after flying the jet from Atlanta (ATL) to Santiago (SCL), seven things surprised me about the "new" product.

1. A spacious and airy cabin

The first thing I noticed when I boarded the A350 was how spacious and airy the cabin felt.

There are no walls, privacy dividers or sliding doors separating seats from one another. On the one hand, that comes as a big downside (which I detail below).

However, the flip side is that the cabin feels open, even though these A350s have overhead bins over the center seats (which are missing above the Delta One Suites product on Delta's legacy A350s).

For those prone to claustrophobia, this product will allay any fears you have of tight spaces.

On paper, a big drawback to these standard forward-facing business-class pods is the lack of storage space. With just a six-inch-wide armrest separating the seats, I was fearful there wouldn't be anywhere to put my loose belongings, like my phone or AirPods.

The cubby fit my shoes, along with my chargers and AirPods, and there was still room for a small purse or backpack.

The downside is that you can't open the ottoman when you're in bed mode.

In addition to the enclosed storage compartment, there's a small area underneath the inner armrest to leave a wallet or keys.

I found sleeping in the Delta One cabin on the 'new' A350 much easier and more comfortable than on many of Delta's other business-class products, especially the Thompson Vantage pods on the Boeing 767-300s.

There's no restrictive footwell, nor do you feel confined in a "coffin" between two fixed armrests, like some people say they feel in other Delta products.

Whether you sleep on your back, side or stomach, this product likely makes for the all-around most comfortable bed that Delta offers.

Note, however, that the bed measured roughly 74 inches long, so you might need to bend your knees while sleeping if you're taller than 6 feet.

You may be surprised to learn that the "outdated" business-class cabin actually offers the widest seat in the entire Delta fleet.

Measuring 25 inches at its widest, the seat is about four inches wider than Delta's signature suites.

The extra width was immediately noticeable — I felt that I had room to move around without being confined to one particular position.

5. Middle seats are the best

There are some notable drawbacks to the new product; namely, the lack of both privacy and direct aisle access.

That said, you can mitigate the second concern by selecting a middle seat, much in the same way that you can enjoy direct aisle access from the middle section of United's legacy Boeing 767-400 Polaris cabin.

That way, you won't need to climb over a stranger — or risk having a stranger climb over you (and possibly wake you up) in the middle of the night.

For solo travelers, the middle seats are undoubtedly the best.

On the other hand, families and friends traveling together might actually enjoy the window pods — one partner can have window views and the other can enjoy actually sitting next to their neighbor.

On my flight, I even lucked out with an empty middle seat, which was an ideal situation given the configuration.

Before I had a chance to fly on the ex-LATAM A350, I was mentally preparing to be disconnected for nine hours. After all, LATAM didn't offer Wi-Fi on its A350s, and a Delta spokesperson couldn't initially confirm whether the airline would install a satellite radome.

Being disconnected wouldn't be a problem in the middle of the night, but it could pose an issue on a westbound flight from Europe during regular business hours.

Fortunately, I spotted a satellite antenna on the ex-LATAM A350 as it pulled to the gate.

I immediately connected to the DeltaWiFi network once onboard and enjoyed fantastic speeds with Gogo's 2Ku offering.

Unfortunately, however, a full-flight stream pass cost a whopping $40, the most I've spent for Wi-Fi on a single flight in recent memory.

This one wasn't necessarily surprising, but it's reassuring that Delta is being very careful about its deployment strategy for its newest A350s.

For now, the airline is exclusively deploying the jets on select frequencies on three routes: between ATL and SCL, Dublin (DUB) and Seattle (SEA).

The airline doesn't market the forward cabin as Delta One Suites. Instead, it calls it just Delta One.

You can verify whether your flight will be operated by this A350, internally dubbed the "35L," by taking a look at the seat map.

If you see a 2-2-2 configuration in business class with a missing Premium Select cabin, then your flight is scheduled to be operated by the 35L.

This strategy contrasts quite starkly with how American Airlines deploys its Boeing 777-200s and Boeing 787-8 Dreamliners, a subset of which feature a less ideal alternating forward- and-rear facing business-class configuration.

With American, you'll only know which cabin you'll experience when a particular aircraft is assigned to your route within a day or two of your flight.

It goes without saying that the 2-2-2 configuration is less than ideal. Of course, it can work if you end up sitting next to someone you know, or if you snag a middle seat when traveling solo.

However, most travelers probably will prefer the 1-2-1 configuration you'll find in Delta One on every other wide-body jet that the carrier operates.

This also makes the 35L version of the A350 the only wide-body without direct aisle access from every business-class pod. That's certainly frustrating if you end up on this plane without doing your research beforehand.

The 2-2-2 configuration also means that there's less privacy for each passenger.

No matter where you sit, you'll have a direct line of sight to (at least) one neighbor, whether that person is sitting next to you or across the aisle.

There's a small privacy partition you can extend between seats, but it's not especially helpful in creating a sense of personal space.

Again, families and friends may not mind the lack of privacy, but for everyone else, it's buyer (or upgrader) beware.