Articles
Caroline Tanner covers news and travel for TPG. She is a journalism graduate of Mizzou and Northwestern.
Follow
July 05, 2022
•
6 min read 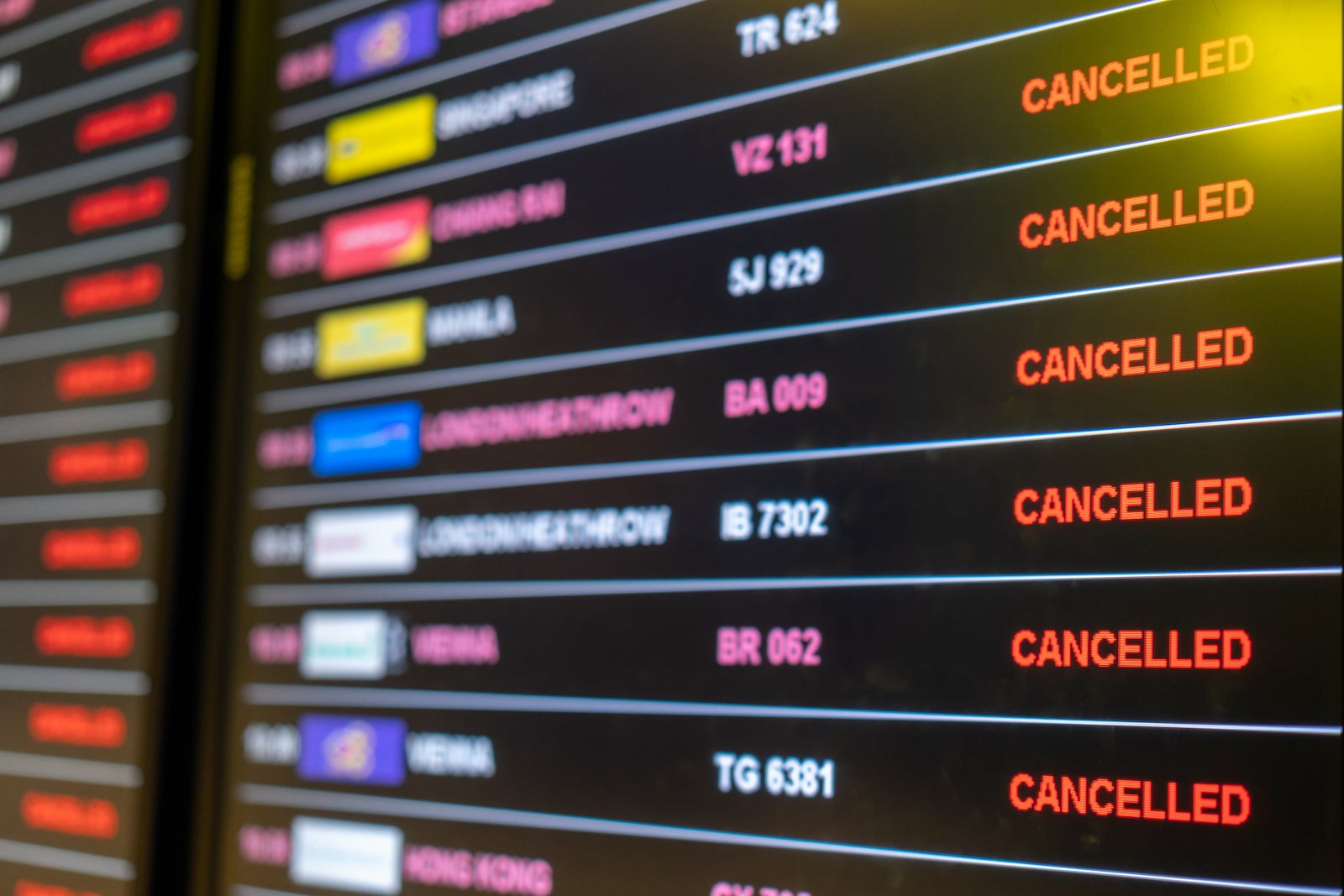 This story has been updated.

If you traveled domestically over the July 4 weekend, congratulations on navigating U.S. airports.

TSA screened nearly 5 million passengers on Friday and Sunday, the busiest travel days of the holiday weekend. This includes a record number of travelers not seen since February 2020 on July 3.

Pre-pandemic travel numbers meant cancellations and delays across July 1-July 4, though not as many as you might expect. Just over 1,400 flights were canceled over the four-day period (1,435 to be exact), with far more delayed (18,266), according to data from FlightAware.

If your flight was one of the unlucky ones, you might be wondering what, if anything, you can do, after the fact.

It's frustrating enough when travel plans go awry. It's even more frustrating when there's no clear sense of what you, as a passenger, can reasonably expect from an airline.

When your flight is canceled or significantly delayed due to reasons outside your control, such as weather or operational issues, you can reach out to airlines afterward to ask for compensation.

Although U.S. federal law requires airlines to compensate passengers who cancel their trip altogether in response to a canceled flight, the U.S. Department of Transportation determines whether a delayed flight warrants a refund on a case-by-case basis.

Therefore, we can't guarantee airlines will give you anything at all, but we suggest being prepared with the tangible requests we've outlined below.

If you choose to contact an airline's customer service department (see our guide on how to contact them), remember that you're speaking to a fellow human on the other side of the phone who deserves respect. Kindness goes a long way, especially in times of stress.

If you dealt with a delayed or canceled flight over the weekend, now is the time to ask your airline to pay for your troubles. This starts with any extra costs (aside from the ticket itself) you may have incurred as a result of the issue.

If your canceled or delayed flight forced you to seek alternative transportation options to get to where you needed to be, ask the airline if they will cover those costs. Did you decide to rent a car and road trip instead? Or did you book a last-minute Amtrak ticket?

If your impacted flight led you to book a new flight the next day, see if the airline will cover at least some of your accommodation and food costs for the unexpected night.

If an airline does contribute to costs related to food and accommodations, it'll most likely be for those tied to hotels near the airport and or meals at that hotel or the airport itself. If you chose to book a night at a five-star hotel downtown, don't expect them to offer to cover that stay.

While airlines are not required to give you anything for the inconvenience, it's possible to get them to cover some of the costs you incurred from inconveniencing you in the first place.

Beyond checking with the airline, if you booked your flight using a credit card that offers trip delay or trip cancellation insurance, see if your credit card company can help.

In these cases, some costs might be covered through protection. You'll want to clarify the terms and conditions of protection offered, though.

For example, both the Chase Sapphire Reserve® and The Platinum Card® from American Express cover accommodations in these circumstances.

There are two scenarios in which an airline might offer you airline miles in return for a canceled or delayed flight.

If you used airline miles to book your flight and proactively canceled your flight ahead of its departure this past weekend because you saw delays and cancelations hitting your airport, ask your airline to credit those miles back to your account.

This would also apply if you used cash to book a refundable flight that you canceled ahead of departure.

The second scenario involves bonus miles, which an airline may award in response to a canceled flight — as was the case recently for TPG points and miles editor Andrew Kunesh.

At the end of last year, Andrew earned Delta Diamond Medallion status, which is the highest of the four Delta status tiers.

Elite status comes with a number of perks that can help reduce headaches while traveling, but having an airline's highest status level is even more helpful when you are requesting something from an airline.

Even if you have a low-level status or no status at all, inquire with the carrier about receiving bonus miles in return for dealing with a bad flight experience.

If you've made it thus far and are asking yourself if there's a way to be refunded for your delayed flight entirely, it depends on whether your delay falls under the category of a “significant delay," as defined by the DOT.

This is because the U.S. legal system does not clearly outline the circumstances that entitle air passengers to refunds for delayed flights (unlike the European Union with EU 261).

Even still, an airline offering to refund you entirely for your delayed flight is unrealistic since refund policies depend on flight schedule changes overall, according to TPG senior aviation reporter Ethan Klapper.

However, he says you should always ask for more than what they initially offer.

“A lot of airlines act proactively and offer a flight credit or miles in response to a delayed or canceled flight, but you can often ask for more — especially if you have status — and they may give it to you,” he said.

For those of you who faced a disrupted flight this weekend, we suggest contacting the airlines in hopes you can recover at least something from a horrible travel weekend.