Close to AvGeek Paradise, But Not Quite There, at the JFK TWA Hotel

Articles
Alberto Riva Alberto runs our flight reviews and oversees special projects across several verticals. Previously, he was the managing editor of Vice News and worked at Bloomberg and CNN, where he was constantly trying to convince people to do more stories about airplanes. He speaks Italian, French and Spanish and one day he’ll be better at German.
Follow
May 16, 2019
•
8 min read 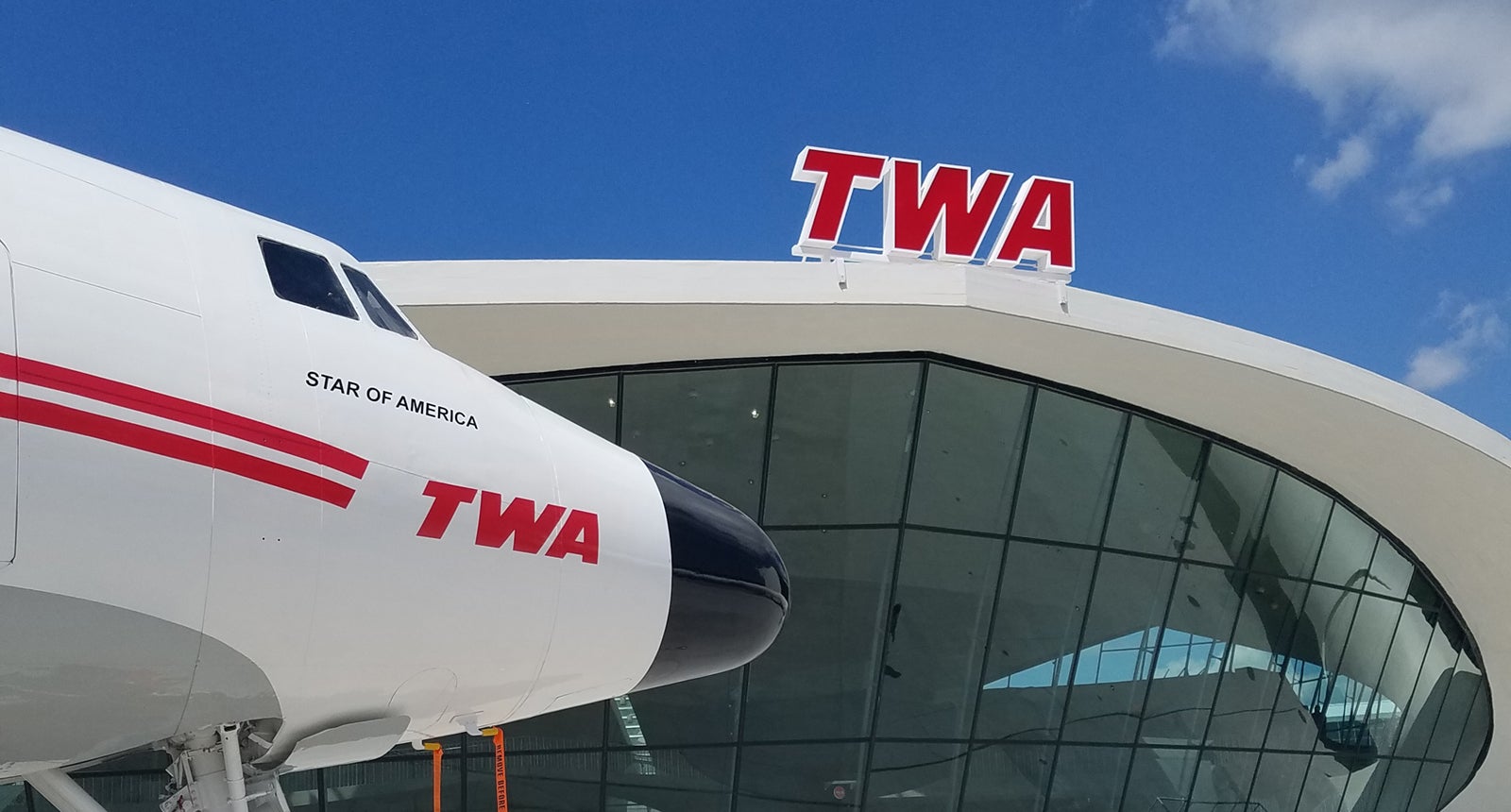 Close to AvGeek Paradise, But Not Quite There, at the JFK TWA Hotel
This post contains references to products from one or more of our advertisers. We may receive compensation when you click on links to those products. Terms apply to the offers listed on this page. For an explanation of our Advertising Policy, visit this page.

Like its rival Pan Am, Trans World Airlines holds legendary status among the names that defined the so-called Golden Age of air travel, the glamorous 1960s heyday of the first generation of jet planes. It's no surprise that the hotel that bears its name, at New York's JFK airport, should attract aviation enthusiasts from all over, drawn by the retro charm of its Midcentury Modernist architecture and by the proximity to the runways of a major international hub. The TWA Hotel at JFK has been hyped as a bucket-list destination for aviation fans, and on opening day, May 15, it proved that it has great potential as an AvGeek magnet.

But overall, it isn't quite finished, and it won't be living up to its considerable promise until the remaining construction work is done, all areas are open, and the kinks that were evident during the soft open on Wednesday are ironed out.

For sheer proximity to the aviation action, the TWA Hotel has all that's needed to become a world-class aviation-geek haunt. Takeoffs, landings and airport operations are within reach of even amateur-grade zoom lenses; for plane photography, it's comparable to the Atlanta Renaissance Concourse Marriott and the H Hotel in Los Angeles, two exceptionally photo-friendly airport hotels. And as a shrine to the bygone days of the early jet age, it has no peer. Yet there are enough issues still unresolved that, if you are an AvGeek looking to book a stay there, we recommend waiting until everything is 100 percent working. (We reached out to the hotel to find out when work will be complete, but nobody would provide an estimate.)

The most glaring omission on opening day was the roof deck, where a swimming pool and bar beckoned, but construction workers and hotel employees still worked to finish the space, and access was not permitted beyond a small area in a corner. No poolside lounging, sadly, and just enough room for the guests trying to photograph the planes. Still, imagine what this space could be when it's actually open for business, with views like this 777 taking off.

You may not even need to leave your room to get great photos of airplanes in action. Ask for a runway-view room on a high floor and you'll have this view, like I had from room 658:

When an Airbus A380 taxies in, you'll be awed by how close the giant looks.

And if the winds are right, planes will take off from the closest runway to your room, letting you zoom in on the action.

Inside, the hotel does the Mad Men-era atmosphere to perfection. It's so spot on that you might think you're living inside a documentary on Modernist architecture. The TWA terminal, which is what the hotel used to be, was the 1962 masterpiece of architect Eero Saarinen.

The TWA logo is truly ubiquitous on the premises. If the airline were still a going concern — it was bought by American Airlines in 2001 — the hotel and the merchandise would be a spectacular marketing tool. Unfortunately, though, the abundance of TWA branding could not make up for the 8pm closure of all food providers minus the Paris Cafe, where walk-ins were just not happening — the place had been booked full already and even our reservation, made weeks prior for three TPG staffers, was canceled with an email that mysteriously, and not very credibly, blamed overbooking. (A representative for the hotel said that the food hall will be fully operational on Monday, and that the Paris Cafe will begin to serve breakfast Friday.)

Add a very unstable Wi-Fi, lights that didn't come on in some rooms, various technical glitches and unpatched holes all over the property, and you have a hotel that, even when considering that it's still in soft-open condition, isn't quite ready for prime time. The elements for a great AvGeek-y time, though, are all there. No less an attraction than a real Lockheed Constellation, the pinnacle of piston-powered airliners, sits just outside the lobby, dazzling visitors with its slender good looks. You can even walk inside and sit at the controls, engine throttles in one hand and drink in the other. The 1958-vintage Constellation looked as stunning in the morning as it did Wednesday night, under the light of a near-full moon — but, again, a hard hat and tools left under the front landing gear reminded visitors that things weren't quite ready.

To add a touch of realism to the opening-day events, the organizers had hired people to dress as pilots and flight attendants, some sporting actual TWA uniforms. Real pilots mixed in as well, coming to take a look from the nearby airline terminals, and the fake crews mingled happily with the real ones.

But while the AvGeeks lamented the disarray of the roof deck, and regular passengers wandered in without the aid of clear signage, at least one group had an absolute blast at the hotel's opening: former TWA employees, who were out in force to celebrate their old company.

"It was a good airline to work for," said Paige Verducci, a former TWA, and then American Airlines, flight attendant who had come to the event with two colleagues, Yoli Gross and Anne Alfano.

Friends since they began working together on the Boeing 747s and 707s that crossed the Atlantic for Trans World, they were delighted by the display of their old work uniforms on the upper level of the lobby.

Their stories — shopping in Milan on layovers, serving courteous first-class passengers who wore suits to fly, working on the now-defunct Lockheed L-1011 tri-jet — were a throwback to an era that AvGeeks are quick to romanticize as the lost heroic age of flying. But, as much as an homage to those days, the TWA Hotel is also a reminder that for all its glamour, that was also an era when society was profoundly different from today's.

When Gross recalled her training at TWA, she smiled wistfully. "Safety was number one," she said with a laugh, "and lipstick was number two."