A faux inaugural: What it's like on board Breeze's new Airbus A220

Articles
David Slotnick is a senior aviation business reporter at TPG. He covers anything and everything to do with the business of running an airline.
Follow
June 09, 2022
•
9 min read 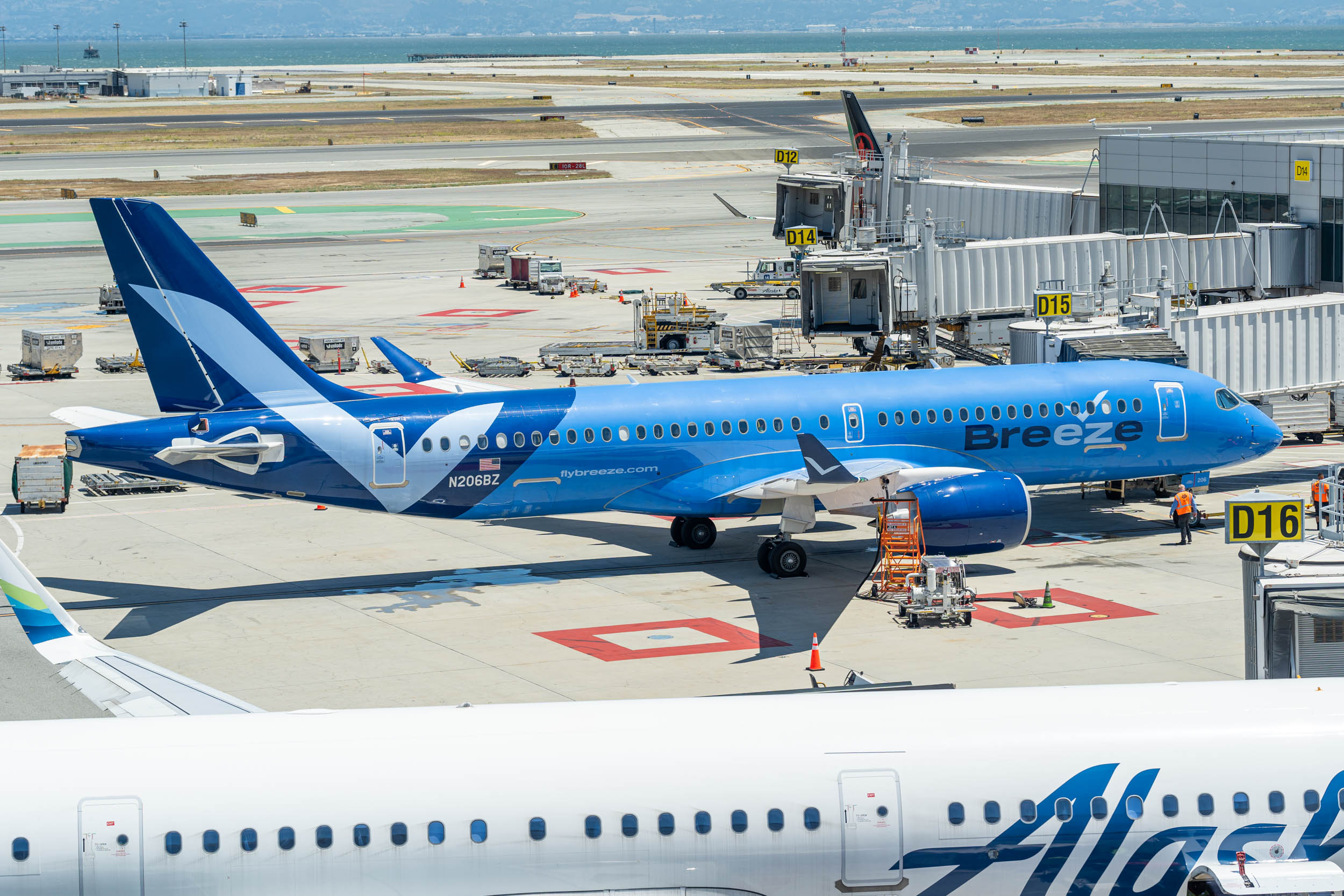 After a bizarre year for the airline industry — in which demand climbed, tapered off, surged and now seems to have no upper limit — Breeze marked the next phase of its growth Wednesday as it begins to deploy its first fleet of brand-new Airbus A220-300s.

There was just one catch: It wasn’t actually the airline’s first A220 flight.

Breeze quietly began flying the A220-300 two weeks earlier, launching its service from Richmond to San Francisco on May 25.

The airline postponed the inaugural event due to some scheduling quirks with Neeleman. Plus, the plane’s certification paperwork from the Federal Aviation Administration was delayed, which left the airline with insufficient time to plan the event, according to a spokesperson.

Instead, Neeleman and the airline decided to wait a little while for the event, allowing the first few weeks of service from Richmond to serve as a “soft launch” for the jet.

Unlocking a wider map with the A220

When Neeleman officially released details about Breeze in early 2020, he pitched the airline as a low-cost carrier that would offer passengers nonstop service between small and midsize cities that lacked direct routes.

The airline launched with a fleet of Embraer E190 and E195 jets leased from Azul, which Neeleman also founded. While the jets offered the airline a way to get off the ground with extremely low capital expenses, the regional jets’ range was limited. Although Breeze invested in outfitting the planes with new branding on the outside, the interior was largely unremarkable and unchanged from Azul.

The A220, on the other hand, has the range to connect any two cities in the U.S., so Breeze can offer direct flights to and from some smaller coastal cities.

The range of the A220 also unlocks the potential for international flights, including possible routes from the northeastern U.S. to western Europe.

"There's a lot of stuff in the Caribbean, Central America, South America — we can do Europe from the Northeast," Neeleman said. Hartford, Connecticut — where Breeze has a base — presents an obvious possible airport for flights to cities like Dublin.

Rumors of a new airline by Neeleman began to circulate in the mid-2010s, and the industry veteran eventually revealed some details for a new airline code-named “Moxy" in 2018.

However, the airline industry has been badly disrupted in the years since Moxy was conceived.

The COVID-19 pandemic led to a complete fall in travel demand. In the years since the pandemic began, and particularly following the rollout of the vaccine, travel demand has climbed back up; although new coronavirus variants have caused brief stagnation, current demand has returned so swiftly that airlines are struggling to keep up.

Meanwhile, surging fuel prices and overall inflation have driven up costs, a challenge for a low-cost airline; this is particularly true for Breeze, which sees its capital expenses increasing as it takes delivery of one new Airbus A220 per month.

Neeleman doesn’t see that as an issue, however.

"It's a trade-off, since these planes are so much more fuel-efficient," Neeleman said. "Just finding the right markets is important."

The first-class experience on the Breeze A220

Breeze was able to design its own onboard product, since it ordered new planes.

The airline made an unusual design choice for a low-cost carrier: It added a first-class cabin, which debuted on the A220.

Breeze offers three fares — "Nice, Nicer and Nicest" — that correspond with coach, extra-legroom coach, and first-class, although each fare comes with different benefits in terms of things like luggage allowances and included snacks, and passengers who purchase one fare can opt to buy a seat from a higher cabin separately.

The first-class seats are relatively standard but thoughtfully considered first-class recliner seats. Neeleman has even said he’s open to installing lie-flat seats in the future if there’s a market for them.

Neeleman said the decision to add a premium cabin comes because it provides an “economical” version of first class, at least from a cost and revenue perspective.

Coach seats on the A220 are laid out in a 2-3 configuration, similar to some regional jets.

"You only lose one seat per row, instead of two," Neeleman said, referring to a typical 3-3 coach formation. "And then you obviously lose a row or two because of the extra legroom."

Related: Inside Breeze Airways’ swanky Airbus A220 with a whopping 36 first-class recliners

In order to make the first-class cabin profitable, "the amount you have to charge is about 50% more," Neeleman said. "The other airlines will charge three times more."

"We're experimenting with it," he added.

Wednesday’s A220 was configured with 36 first-class seats spread across nine rows, but the airline plans to introduce versions of the plane with fewer Nicest seats and more Nicer ones. The plane is open, without a curtain or bulkhead between the cabins, making it relatively easy to add or remove the premium seats based on current needs and demand.

The seats feature a generous amount of recline, but at the same time, when the seat in front of you is reclined, it's not too intrusive. The headrest has adjustable wings, and passengers can raise or lower them.

The highlight of the seat, however, was the leg rest, which could be deployed independently of the recline. With the seat pushed back and the leg rest out, it was a remarkably comfortable recliner seat. Even with the space limitations inherent in a recliner-seat cabin, I don’t understand why more airlines haven’t added leg rests to their first-class seats. It would, in my opinion, dramatically elevate the experience.

Wide tray tables extend from the middle armrest. I didn’t have a tape measure, but the table was large enough to hold my 16-inch MacBook Pro.

There's plenty of storage space, with a sort of trough-type tray running at seat level on both sides; it had enough room to store small things like headphones, phones and wallets, as well as larger items like tablets.

There was also a standard seatback pocket, along with a seatback shelf. Of course, there was also storage for a bag underneath the seat.

Speaking of bags, the overhead compartments were big enough to fit a standard carry-on bag. Despite the flight being mostly full, there was enough room for everyone and nothing needed to be gate-checked.

There are no inflight entertainment screens on the A220. Instead, the airline plans to offer inflight streaming to passengers’ own devices, along with Wi-Fi internet connectivity.

Unfortunately, the streaming and Wi-Fi aren’t quite ready yet. Breeze is working to finalize and install the technology, which should be introduced by this fall, an airline spokesperson said. In the meantime, it was actually nice to have the chance to disconnect for a bit.

Still, especially before a transcontinental flight like this, passengers should make sure to download movies, shows, books or anything else they need for a few offline hours.

Device holders on the tray tables and the seatbacks are perfect for resting devices while watching movies. Each first-class seat has a power outlet and two USB ports — one USB-A and one USB-C (coach seats skip the power outlet but offer the same USB ports).

First-class passengers get a complimentary drink and snack, while passengers in other cabins must pay. I had coffee (which wasn’t on the menu) and a bag of M&M's.

Just shy of six hours after taking off, we landed in San Francisco, where the airline held a small reception to celebrate the route and the plane.

It was an extremely comfortable ride, and I’d argue the first-class recliners are among the most comfortable in the U.S. today.

It’s unfortunate that there’s no inflight entertainment screen, and that more substantial meals aren’t offered on such a long flight, even for purchase. The Wi-Fi and streaming internet are conspicuous in their absence, so it will be nice to see the airline introduce those soon.

Still, with new route connectivity at a decent price compared to other first-class cabins, Breeze offers a compelling product that changes the typical ultra-low-cost carrier offering.

Featured image by David Slotnick
Editorial disclaimer: Opinions expressed here are the author’s alone, not those of any bank, credit card issuer, airline or hotel chain, and have not been reviewed, approved or otherwise endorsed by any of these entities.