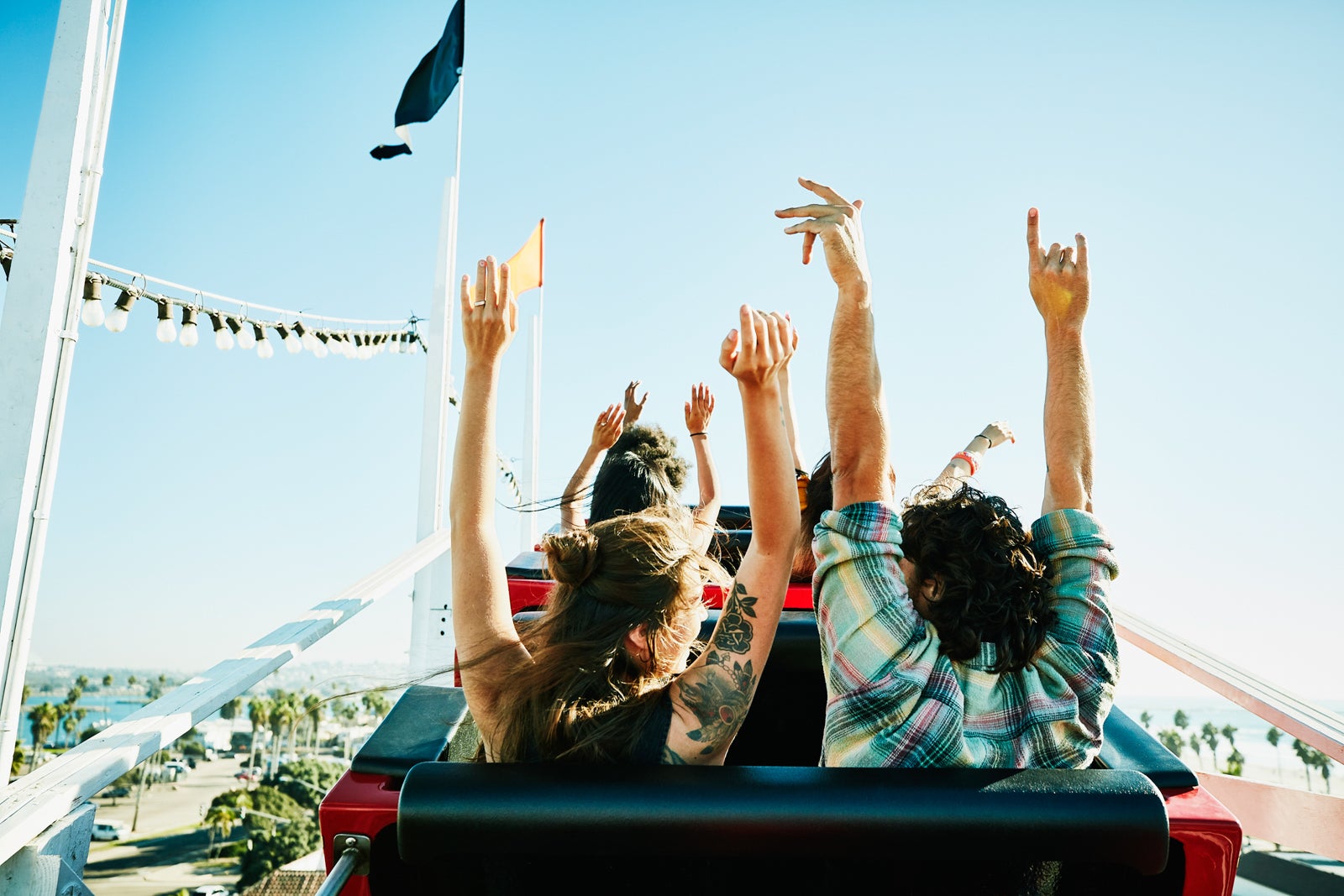 The anticipation building as you climb the track before the first drop, the delighted screams as your stomach dips with the fall, the wind whipping through your hair, the adrenaline pumping through your veins … for thrill-seekers, there’s something uniquely freeing about roller coasters.

The U.S. is home to some of the best roller coasters in the world, and you can celebrate National Roller Coaster Day — Aug. 16 — this year by hopping on one of these coasters.

One of the newest roller coasters in the U.S. is the Jurassic World VelociCoaster at Universal’s Islands of Adventure in Orlando.

The ride will take you 155 feet high at up to 70 mph on 4,700 feet of track. There’s a barrel roll over water, two high-speed launches, a zero-gravity inverted stall and an 80-degree drop after the tallest peak of the ride.

This isn’t the tallest or fastest coaster on this list, but the VelociCoaster has also been heralded for its immersive queue experience that tells a story as you wait to board the ride. You’ll even see lifelike animatronic raptors.

If you’re near Charlotte, check out Fury 325 at Carowinds amusement park. This hornet-themed ride will send you down a 325-foot drop with twists and turns at speeds up to 95 mph — and that first drop is a doozy.

Fury 325 is also one of the longest coasters in the U.S., measuring 1.25 miles in total. Roller coasters tend to offer short-lived thrills, but you’ll get a good bit of ride time out of this coaster.

Guardians of the Galaxy: Cosmic Rewind

Related: 13 new attractions and offerings coming to Disney World in 2022

This coaster strikes a balance between thrilling and family-friendly. There are no inversions or monstrous drops and the minimum height requirement is only 42 inches, but the ride does move pretty quickly (up to 60 mph) and once you hit the reverse launch at the start, there's really no slowing down.

Superman: Escape from Krypton at Six Flags Magic Mountain in California has been around for a decade now (the first version of the ride actually debuted in 1997) and remains one of the best roller coasters in the U.S.

With top speeds of 100 mph and a maximum height of 413 feet, it’s still one of the tallest and fastest coasters in the country. Plus, this is a reverse freefall coaster, which means you’ll be hurtling at high speeds while going backward.

SeaWorld Orlando is breaking more than just the ice with its newest addition. Ice Breaker is the park's first launch coaster and breaks the record for the steepest vertical drop in the state of Florida.

The coaster moves through four forward and backward launches and 13 air-time twists and turns that will certainly wake up the butterflies in your stomach.

Six Flags Great Adventure in New Jersey is home to the tallest roller coaster in the world, Kingda Ka. It soars 456 feet in the air, sending passengers along the track at speeds up to 128 mph.

It’s a short ride, but you’ll be screaming the entire time. You go from zero to 128 in just 3.5 seconds up a 90-degree hill. Then, you’ll drop right back down in a 270-degree spiral. All in all, it takes less than a minute, but it’s still worth it.

Iron Gwazi opened at Busch Gardens Tampa Bay in March 2022, but it isn't entirely new. The hybrid steel and wooden coaster was inspired by and built using elements from its predecessor, a wooden roller coaster that opened in 1999 simply called Gwazi.

Most of the coasters on this list are made of steel, but Outlaw Run at Silver Dollar City in Branson, Missouri, breaks the mold as a wooden roller coaster. The wooden track matches the general “old-timey” aesthetic of Silver Dollar City, but it doesn’t hinder the ride’s thrill factor.

It’s one of the shorter coasters on the list at only 107 feet tall, but you’ll reach speeds of up to 68 mph while looping through three inversions throughout the ride. The primary drop is 162 feet at an 81-degree angle.

Wonder Woman Flight of Courage soars through the sky at speeds of up to 58 mph along more than 3,300 feet of track. You may not gain any super powers from riding this coaster, but you'll certainly feel like a superhero after conquering it.

The Voyage at Holiday World in Santa Claus, Indiana, is one of the most merciless wooden roller coasters you can ride. The track is more than a mile long, making for a ride time of nearly three minutes — and there are very few breaks during that time.

Related: 11 regional theme parks that are closer to home but just as fun as the big names

The ride hits a top speed of 67 mph and has the most airtime of any wooden coaster as it takes you through multiple banked turns, stomach-dropping falls and underground tunnels.

For many, roller coasters are the highlight of any theme park experience.

But keep in mind that coasters aren’t for everyone. They aren’t suited for small kids — all have a height requirement (usually at least 41 inches). Additionally, roller coasters aren’t always the most size-inclusive attractions for plus-size travelers.

In my personal experience, rides at Six Flags and other smaller theme parks actually tend to be better about inclusivity than Universal Studios, but it is something to keep in mind before you plan your trip.

For those who can ride these top coasters, you’ll be hard-pressed to find more thrilling coasters in the U.S.