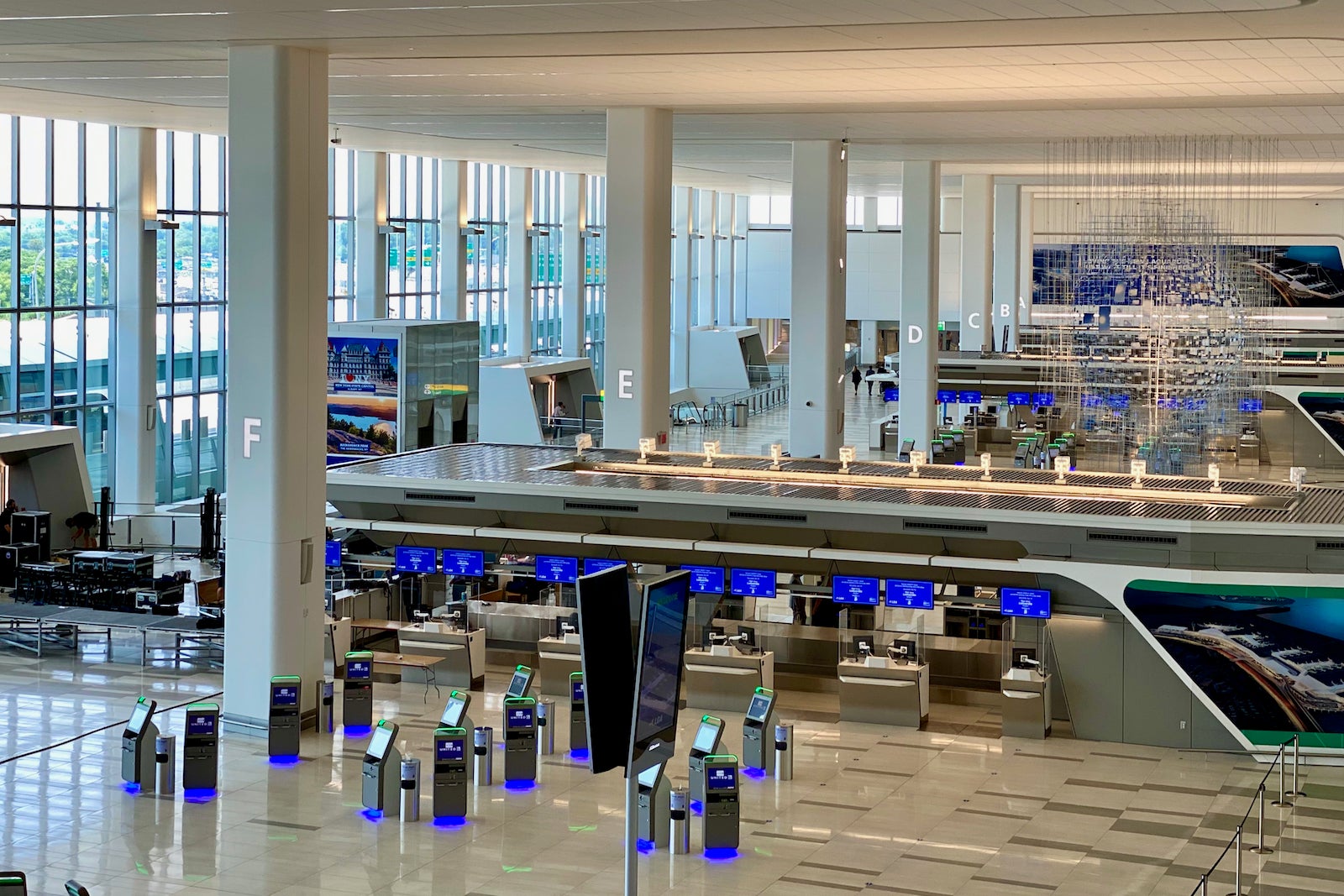 Ever wondered how your checked bags get from the check-in counter to the plane? Or from the plane to the baggage claim?

Spoiler alert: it's a lot more complicated than you probably think. At LGA's state-of-the-art Terminal B, your luggage travels across a 3.2-mile system of interconnected conveyor belts — spanning three levels — before being deposited in a baggage cart and driven to the plane.

Along the way, the fully-automated system, which was designed to handle 3,250 bags per hour, sends your bag through TSA screening. In some cases, it might even be moved around by an autonomous robot!

There's so much more to the process though, so come along for a behind-the-scenes ride from the ticket counter to the plane.

As Rick Cotton, executive director of the Port Authority, which oversees the airport, told TPG, "the entire baggage system is extraordinary. The volume and speed are simply second-to-none."

From check-in counter to security

TPG's tour of the Terminal B baggage system began at the check-in counter, where every checked bag begins its voyage.

In Terminal B, customers have a choice of where to drop their bags — curbside or at the counter. Either way, once the bags are inducted into the system, they're placed on the conveyor belt and start crisscrossing the underworld of the airport.

If you choose counter check-in, you'll notice that there aren't any traditional scales. Instead, they're built directly into the floor to avoid any possible injury lifting bags.

LaGuardia Gateway Partners (LGP), the operator of Terminal B, is responsible for the baggage system. The company is completely independent of the terminal's four airline tenants — Air Canada, American, Southwest and United.

As such, LGP has designed the system so that no single airline gets an advantage. Even though American's counters are closer to the main baggage processing system (and don't have to travel as far), LGP ensures that every checked bag, regardless of airline, gets from check-in to baggage tug within six minutes.

That number jumps to 12 to 18 minutes for bags that require secondary screening.

“It's important for us to offer the best possible baggage handling service to ensure our tenants are happy,” Angelo Salgado, facilities manager for LGP, told TPG during our exclusive tour.

Just like passengers go from check-in to security, the same applies to checked bags.

Cotton remarked that "the security aspect of the baggage system is state-of-the-art. There's a three-pronged security process all designed to increase efficiency."

The first step in the process is a Smiths Detection CTX machine. Five of these are in use to get bags on their way.

If a bag isn't one of the 70% or so that pass this automated security check, then a TSA agent stationed in a remote office gets a notification. That officer then performs a second screening — and determines whether it can proceed to the plane or gets pulled for a final, manual screening.

The final screening is carried out in the CBRA, or centralized baggage reconciliation area. Here, there are dozens of TSA officers — and 55 robots — standing at the ready to check and clear bags as expeditiously as possible.

Yes, you read that right, robots.

These robots, dubbed mobile inspection tables (MITs), carry bags from the conveyor system to the CBRA. Using light-detecting technology, they automatically take the bag to the next available TSA agent. The robots automatically scan barcodes — that were installed by SICK — along the way to the agent.

The agent doesn't need to scan or move the bag — the identifying information automatically displays on a screen. After completing the search directly on the MIT, the TSA officer sends the bag on its way.

The MIT then returns the bag to the baggage system and automatically docks itself to a charging station, preparing for its next mission.

There are over 18 barcode scanners, also installed by SICK, placed at nearly every turn to identify and sort bags.

Once the barcode is scanned, the system instantly directs the bag to one of the 17 sortation piers, which are each assigned a particular flight.

Each pier is connected to the main conveyor belt at 90-degree angles. There is a network of gates that open and close to push bags to their respective piers.

Once a bag is at the pier, it's once again in the airline's possession. The carrier is responsible for loading the baggage cart and tugging it to the plane.

As Cotton succinctly quipped, "with these technological advancements, travelers can rest assured that their bags won’t be lost. And that they'll move quickly."

Though LaGuardia Gateway Partners is ultimately responsible for the baggage system, it doesn't actually operate it.

Instead, Oxford Airport Technical Services is subcontracted to oversee the system. The company has a 24/7 operations center located in the dungeons of the airport (sans windows) that acts as a central hub.

There's always an engineer on duty to address any issues as they appear. The company's goal is to respond to jams within three minutes of first seeing the alarm.

In addition to monitoring for faults, the operations center tracks several performance indicators every day, like throughput, downtime, number of mishandled bags and more.

From plane to baggage claim

There's no worse feeling than arriving at the baggage claim only to wait for what feels like hours for your luggage.

In the new Terminal B, the system is designed to limit that frustration. Once the airline offloads bags, they're deposited onto one of the nine carousels within minutes. There's no security check required — they go straight from the plane to the terminal and then to the baggage claim.

If you're connecting and your bags were checked to your final destination, odds are that they will be transferred directly to your next flight, minimizing the chance of them getting lost in transit.

Related: How to behave at baggage claim

With 1,704 miles of wires, 55 robots and 3.2 miles of conveyor belts, LGA's baggage system is one of the most advanced in the country.

You might (fondly) remember the last time you were at LGA before the pandemic. Odds are you waited 30 minutes or more to get your bag at LGA.

Those days are now long gone. Not only will your luggage be processed much faster than before, but you also don't have to worry about leaking ceilings or flooded bathrooms along the way.