Articles
Katherine Fan is a former senior travel features reporter at The Points Guy who covered everything from personal finance to travel and aviation.
March 30, 2018
•
10 min read 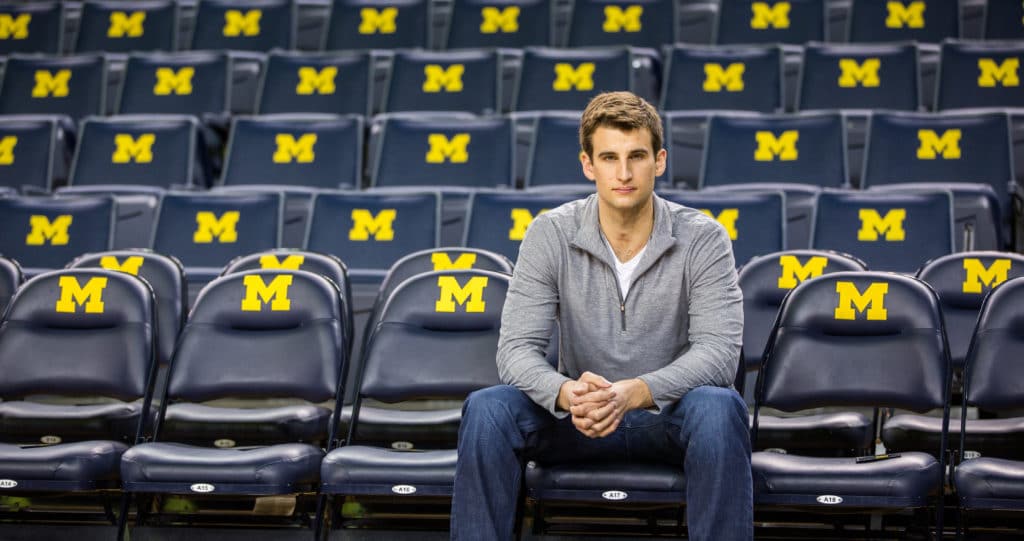 The Story of Austin Hatch: Michigan Basketball Player and Two-Time Plane Crash Survivor
This post contains references to products from one or more of our advertisers. We may receive compensation when you click on links to those products. Terms apply to the offers listed on this page. For an explanation of our Advertising Policy, visit this page.

Michigan Wolverine Austin Hatch will be courtside for his team's NCAA Final Four game tomorrow, March 31. But the 23-year-old senior won't be wearing a jersey for his "last go-round" with the team he calls his extended family. Instead, Austin will be in a suit and tie on the team bench in his role as Michigan's student assistant basketball coach. Student assistant coaches don't usually attend away games, but Austin received a special invitation from John Beilein — head coach of the men's basketball team — who recruited Hatch to the university six years prior.

This is the story of why coach Beilein calls Austin “one of the greatest stories I think that I’ve ever been associated with, and am pleased to be a part of."

On September 1, 2003, Austin's happy-go-lucky childhood spiraled to a devastating terminus when his family's single-engine Beech B36TC plane crashed into a utility pole returning from the family's lake house. His father, anesthesiologist Dr. Stephen Hatch, saved Austin's life by throwing him out the window of the plane and away from the burning wreckage. But Stephen was unable to rescue wife Julie and his other children, five-year-old Ian and 11-year-old Lindsay, from the back seats before the onboard oxygen tank exploded.

Wracked with grief from their shared loss, Stephen and Austin sought to rebuild their lives over the next eight years, honoring their loved ones by moving forward together. A few years after the accident, Stephen met and married Kimberly Neal, whose three children became Austin's new siblings. Stephen and Kim did away with the "step-" designation to raise their blended family as one, and Austin found a happy home that supported and encouraged his passion for athletics. Straight-A student Austin excelled at basketball, joining the varsity team at Canterbury High School in Fort Wayne, IN, with his family cheering him on from the bleachers.

"It was always academics first," Austin said. "If I didn’t have a 4.0 in school, I wasn’t playing in games. Basketball always came second. If I wasn’t performing in the classroom, [my father] said, you will not play."

January 18, 2011, was a red-letter day for Austin, by now a 6'6" sophomore at Canterbury High.“It was the one game Coach Beilein came to see me play," Austin recalled. "We beat a rival from another town 88-82.’’ With true Hatch humility, Austin did not mention his personal successes, instead leaving it to ESPN to report how that day Beilein watched Austin singlehandedly score 30 points and grab 16 rebounds against local rival Bishop Luers High School.

The teenager's performance left a strong impression on Coach Beilein, who offered him a full-ride scholarship to the University of Michigan. Austin verbally committed to Michigan on June 15, 2011. "It was a very special moment for me," Austin said. "There was no reason to wait. There's nothing I don't like about their program, and I couldn't turn it down." Indeed, Going Blue was a family affair for Austin, whose paternal grandfather Jim and mother Julie were both Wolverines.

The next life-altering moment came just nine scant days later on June 24, 2011. To celebrate Austin's milestone achievement, Stephen flew Kim, Austin and their two family dogs up to the family lake house at Walloon Lake, in the northwest part of Michigan's Lower Peninsula. According to the National Transportation Safety Board report, Stephen's Beech A36 missed the runway and crashed into a garage near Charlevoix, MI, the wreckage ironically coming to rest just below a basketball hoop.

Stephen and Kim died in the accident, and 16-year-old Austin sustained a traumatic brain injury, a broken collarbone and a punctured lung. Doctors put Austin in a medically-induced coma for eight weeks to give his broken body a fighting chance to heal. Against all odds, the teen pulled through. But when Austin woke up, the athlete who had averaged 23.3 points and 9.3 rebounds per game as a sophomore at Canterbury had to relearn how to walk, talk, eat and even breathe.

During those dark times of rehab and grief, there were glimmers of hope. Austin slowly fought his way back to recovery with the help of extended family and friends, eventually making his way back onto the basketball court at Loyola High in California. Coach Beilein honored Austin's Michigan scholarship, where Hatch made his true freshman debut against Hillsdale on November 15, 2014, and scored his first career point for the Wolverines in a free throw on December 22, 2014.

But on April 27, 2015, Austin and Coach Beilein released a joint statement announcing his transition to a medical scholarship as an undergraduate student assistant. “My body can’t execute what my mind tells it to do," Austin explained. "I can think the game as well as I ever did; I just can’t drive baseline and dunk anymore."

In the face of gut-wrenching disappointment, Austin continued to exhibit the extraordinary resilience that had brought him back from the dead. In his official statement, Austin defined courage as the push to achieve goals in the face of insurmountable obstacles, done in a way that others can respect and admire. "Basketball has always been a huge part of my life," he said. "However, it is what I play, not who I am."

“I’m not going to lie: It would be totally cool to be able to play in these games on the big stage and play in March Madness," Austin said. "That would be awesome. But I have so many things to look forward to in life. It’s obviously a tough situation, and I’ll never move on, but I’ve made a decision to focus more on what I’m blessed to still have in my life. Before the accident, I was working to be the best basketball player I could be. Then this happened and my mindset didn’t change. The goal shifted, but my mindset didn’t."

Over the remaining years of his collegiate career, Austin stayed close to Beilein and the team while shifting his focus toward his organization studies degree, sometimes taking up to 17 credits in a semester.

Last month, Austin dressed for the Wolverines’ final home game against Ohio State and went through warm-ups along with his teammates, to the deafening cheer of the crowd.

“He’s such an inspiration to us,” said Michigan senior guard Muhammad-Ali Abdur-Rahkman. “He tries to uplift us. We’re really glad he’s on our team.”

Next up on Austin's calendar is March 31, 2018: Tomorrow, the Wolverines face off against the Loyola Chicago Ramblers in San Antonio, TX.

Soon after that comes graduation: Michigan's Commencement Day falls on April 28 this year.

Perhaps the most exciting date to come, though, is June 16, 2018, when he will marry fellow Michigan athlete Abby Cole in Petoskey, MI. The reception will be held at the Walloon Lake Country Club – just a few miles down the road from the Hatch family lake house, which now belongs to Austin.

Austin remembers the exact date he met Abby in a political science class: October 26, 2013. She walked in late, Austin recalled with a smile: "She was looking for a seat and I flagged her down and said, 'I’ve got a seat right here next to me.'" The collegiate power couple share more in common than their athletic prowess: despite her own career on the university volleyball team, Abby also experienced injuries that kept her from playing basketball for Michigan.

Abby's family has become yet another source of support for Austin. "Obviously, my immediate family is no longer here," he said. “I don’t attempt to diminish the significance of that loss. But I’m very blessed to have the loving family that I do."

"Abby is the reason I'm still here," Austin said. "I really believe that."

"Uncommon men live their lives with integrity. They always do the best they can. And they don't just say they will practice hard and love harder: they do it." Be an uncommon man, Austin's father would say.

Austin has never forgotten those wise words from his MOTM, or Man of the Millennium. While signing his official letter of intent for the University of Michigan basketball team in November 2013, Austin publicly spoke of his father, the man he called his "best friend, mentor, teacher, coach and fan," two and a half years after the 2011 plane crash.

Austin Hatch exemplifies the uncommon man — even down to his fearlessness regarding aviation.

"I’m not afraid of flying at all," Austin said. "Flying was normal for me. It was as normal as driving. We flew everywhere. Obviously, the plane crashes have been awful, and the repercussions of those have been worse than anyone can imagine. [But] the odds of me getting into another plane crash are extremely slim. This is going to sound kind of morbid, but I don’t fear death. I don’t fear dying. I am not afraid."

Related stories
The best credit cards for extended warranties
From shopping portals to cash back: Your complete guide to maximizing Black Friday purchases
The hotel with a private entrance at Disneyland: Disney’s Grand Californian Hotel & Spa
Is the era of amazing cruise deals coming to an end?

Our points-obsessed staff uses a plethora of credit cards on a daily basis. If anyone on our team wouldn’t recommend it to a friend or a family member, we wouldn’t recommend it on The Points Guy either. Our opinions are our own, and have not been reviewed, approved, or endorsed by our advertising partners.
See all best card offers
Related stories
Guide
The best credit cards for extended warranties
Guide
From shopping portals to cash back: Your complete guide to maximizing Black Friday purchases
Reviews
The hotel with a private entrance at Disneyland: Disney’s Grand Californian Hotel & Spa
News
Is the era of amazing cruise deals coming to an end?