Articles
Chris Dong was a reporter at The Points Guy, where he covered the intersection of credit card rewards and travel.
Feb. 08, 2022
•
9 min read 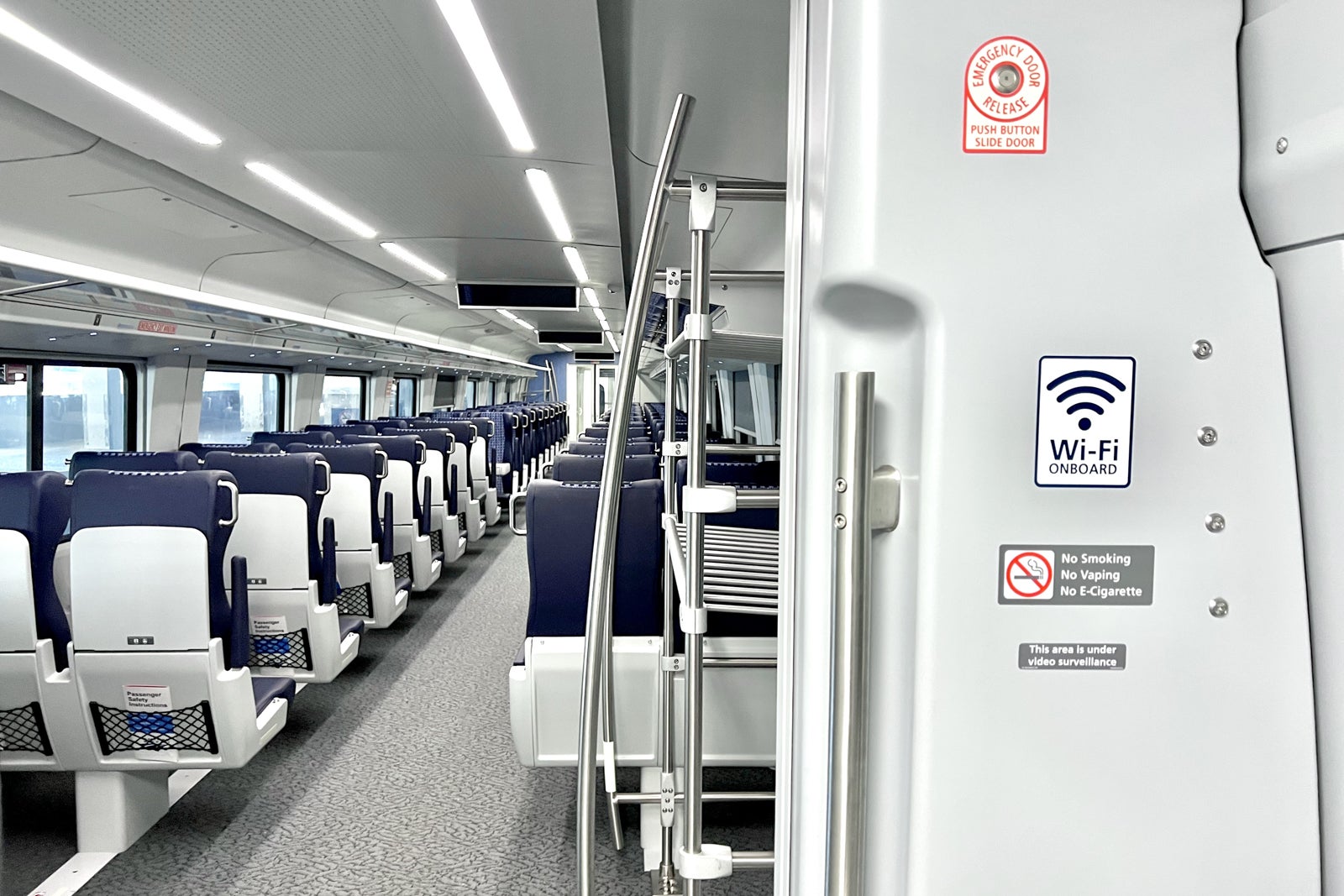 You can experience the future of U.S. train travel today.

This past July, Amtrak placed a $7.3 billion order with California-based Siemens Mobility for as many as 83 trains, replacing rail cars up to 50 years old. This includes new equipment on the pivotal Northeast Corridor network connecting Boston, New York, Philadelphia and Washington, D.C.

While those new trains — replacing 40% of Amtrak's entire fleet — won't begin operating until 2024, we are getting a glimpse of what they will look like.

That's because last week Amtrak quietly unveiled the first deliveries from a previous order with Siemens dating back to 2017. While some interior modifications may occur, this is essentially the same product that will roll out throughout the country over the next decade.

Dubbed the Amtrak "Venture" fleet, I journeyed through the Chicago suburbs to see if these passenger coaches are truly going to "reshape the future of rail travel," as Amtrak CEO Bill Flynn said in a statement from 2021.

Amtrak is ushering in a new era, so let's see how this new passenger experience compares to the trains of yesterday.

The future of Amtrak's Venture fleet

While it remains to be seen how Amtrak will deploy trains from its 2021 order, we do know more about the previous 2017 order that will be the backbone of Amtrak Midwest.

Currently, there is only one new Siemens train with four individual coaches in service. As of this article's publication, that train is operating on the Lincoln Service line between Chicago and St. Louis, Missouri.

An Illinois Department of Transportation representative told TPG that the Amtrak Venture fleet will eventually be deployed on all state-supported routes in Illinois, Michigan, Missouri and Wisconsin.

But only coach class train cars will be delivered for the time being, with new business class cars put into service later in 2022 and new café cars in 2023.

Related: The brand new Amtrak Acela fleet is coming; Here’s a look inside the new trains

Long story short: If you want to experience the latest and greatest coach class experience from Amtrak now, you'll have to be in the Midwest to do it.

These Midwest-based trains are a long time coming, as the first orders can be traced back to 2012 with a previous manufacturer. In addition, a problem with the water supply in mid-2021 further stalled progress on getting them into service.

But they're here now — so let's hop on board.

Related: Riding the rails from Portland to Chicago in an Amtrak roomette

One of the first things you may notice is an embedded set of retractable stairs that are built into the train.

At stations where there is no elevated platform, this can be automatically lowered. Previously on older trains, a conductor had to manually place a set of stairs at each door.

Oddly, these new trains were built with only one set of doors per side, which theoretically would slow the boarding and deboarding process down.

Everything is new about the passenger cabin from seats to storage to connectivity and more. Think light, bright and modern -- but also more like an airplane cabin.

While the overhead white lighting borders on harsh, there's no question these trains feel like they've finally entered the twenty-first century, especially when compared to Amtrak's previous "Horizon" and "Amfleet" cars.

Windows are significantly larger, too, allowing for more natural light and sightlines.

The seats are in an attractive dark purple shade, with a mix of vinyl and fabric coverings. They are also more contoured than previously, with firm cushioning, lower-back support and winged headrests.

However, I couldn't help but feel these seats felt more like slim-line airplane seats than the comfy recliners of old.

And while I was fairly comfortable during my one-hour ride between Chicago and Joliet, I could see these seats being a little too stiff for longer journeys, such as the five-hour passage all the way through to St. Louis.

Unfortunately, seat width also decreases from about 21 inches on the Amfleet and Horizon cars to about 19.1 inches. Since I rode the Venture and Amfleet back to back, I could absolutely notice less padding and narrower seats on the newer coaches.

The new Venture trains also get a significant downgrade when it comes to seat recline. In fact, the seats don't recline in the traditional sense at all. Instead, the seat bottom cushion slides forward — about 2.4 inches.

While this motion doesn't impede on your neighbor behind you, I barely felt any difference in comfort when I went to hit the recline button.

It's not all bad news though. Seat pitch in coach is still excellent at 36.8 inches, matching most airlines' domestic first-class configurations. For instance, American Airlines' 737MAX first class measures exactly 37 inches of pitch with 21 inches of width.

The tray table gets a nice upgrade too, with a huge surface that allowed me to not only fit my 13-inch MacBook Pro, but it also provided space for other items.

And while the older Amfleet trains don't have an armrest between passengers in coach, these new Venture trains do. Below this center armrest is also where two power outlets and two USB outlets (also new) are housed.

A coat hanger and overhead reading lamp at each seat completed the overall experience.

Seats aren't getting more narrow for no reason at all. The aisles have now gotten significantly wider.

Now, it's not only easier to pass other passengers and conductors, but also wheelchair users will soon be able to access the entire train from end to end.

However, train-mounted wheelchair lifts aren't coming until 2023 on the new cafe cars.

That means, for now, wheelchair users will have to continue relying on station-mounted lifts — and they won't be able to pass through the older, more narrow cafe car.

On the whole, though, accessibility is a notable improvement. Wheelchair seating and storage are also on every new car, along with restrooms that are large enough to fit a wheelchair.

Speaking of which, at the end of each car, you'll find a restroom with new touchless controls. That includes a no-touch faucet, soap dispenser, hand dryer and toilet flushing capabilities.

While this new restroom doesn't quite have a "wow" factor (sorry, no window views like on a Delta Airbus A220), it's a huge step up over the antiquated restrooms on the rest of the Amtrak fleet.

Besides a transparent shelf above the seats for luggage, racks are now on every end of each car with the ability to convert them to carry bikes or wheelchairs.

This one's big. An Amtrak spokesperson confirmed that Wi-Fi has been improved and there are additional antennas and more powerful routers on each coach car. Previously, routers were only located in the cafe car.

In back-to-back real-life tests, I found the Wi-Fi to be much faster on the new Venture cars to browse email, surf the web and do basic tasks. Yes, usable Wi-Fi seems to be finally coming to an Amtrak train near you.

Additionally, large display monitors are located throughout the coach which shows announcements, train information and whether the restroom is in use.

These new trains are a glimpse into the future of Amtrak for train travelers across the country.

While these aren't the first Siemens trains to be introduced (that honor goes to Brightline), the launch of the Venture fleet for Amtrak is a transformational moment for rail service in the U.S.

Travelers who have been on trains in other countries across Europe or Japan may scoff at the notion that these new cars are revolutionary. But for years, Amtrak has been in need of a serious refresh ... and they're finally getting one.

Overall, though, I can't help but feel slightly underwhelmed by the Venture fleet. It's modern and functional with usable Wi-Fi, better restrooms and impressive accessibility. But the seats themselves feel like a step backward and feel more airline-like than most people may want.

At the end of the day, this is a new chapter for Amtrak. I can only hope that with passenger feedback, these interiors will get some enhancements as they roll out across the entire country.

All photos by author, unless otherwise indicated.

Related stories
This reader nearly lost 750,000 Ultimate Rewards points — reader mistake story
Lower fuel surcharges: Reward Flight Saver rolled out on all British Airways flights
6 credit card perks you can gift for the holidays
Flying Blue introduces an interactive map with entry award rates, officially adds stopovers: What you need to know
Editorial disclaimer: Opinions expressed here are the author’s alone, not those of any bank, credit card issuer, airline or hotel chain, and have not been reviewed, approved or otherwise endorsed by any of these entities.

Our points-obsessed staff uses a plethora of credit cards on a daily basis. If anyone on our team wouldn’t recommend it to a friend or a family member, we wouldn’t recommend it on The Points Guy either. Our opinions are our own, and have not been reviewed, approved, or endorsed by our advertising partners.
See all best card offers
Related stories
News
This reader nearly lost 750,000 Ultimate Rewards points — reader mistake story
News
Lower fuel surcharges: Reward Flight Saver rolled out on all British Airways flights
Guide
6 credit card perks you can gift for the holidays
News
Flying Blue introduces an interactive map with entry award rates, officially adds stopovers: What you need to know