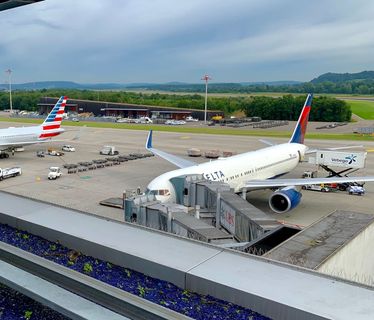 American Airlines Loses World's Largest Airline Title to Delta and United
This post contains references to products from one or more of our advertisers. We may receive compensation when you click on links to those products. Terms apply to the offers listed on this page. For an explanation of our Advertising Policy, visit this page.

American Airlines is no longer the world's largest airline, losing its title to both Delta Air Lines and United Airlines in the second quarter.

Why the split title? It all depends how "biggest" is measured. But, no matter the measure, it's no longer American — at least based on the numbers from the second quarter of 2019.

Deutsche Bank analyst Michael Linenberg first noted what was then a potential change in ranking in a report earlier in July.

American has held the title of world's largest airline since its merger with US Airways in 2013.

The Fort Worth, Texas-based carrier's drop in the rankings come as it faces challenges on multiple fronts. The company has idled 24 Boeing 737 MAX 8 aircraft since the type was grounded in March, costing it at least $400 million in pre-tax income this year and prompting the cancellation of thousands of flights including the suspension of its Dallas/Fort Worth-Oakland route.

In addition, weather and an ongoing dispute with mechanics took an added toll on American's operation in the first half of the year.

American's capacity, measured by ASMs, shrank for the first time in seven years as a result of the operational challenges it faced in the second quarter.

Delta and United, meanwhile, have not sat idle as American has struggled. Delta has excelled at finding new ways to generate revenue, including being the first to introduce a no-frills basic economy fare, successfully increasing the number of paid upgrades to extra-legroom and first class seats on its flights, and expanding its non-core revenue streams — like its Delta TechOps maintenance business.

United is in the midst of a major domestic growth push. The airline began expanding at an accelerated rate above 4% annually last year in an effort to recapture what executives deem to be its "natural share" of the U.S. market. Growth has been concentrated on its mid-continent hubs in Chicago (ORD), Denver (DEN) and Houston (IAH), but hubs at Washington Dulles (IAD) and other airports have also seen new flights under United's expansion push.

American, for its part, sees its lagging performance as a temporary blip. Executives expect revenue growth to accelerate as operational issues pass and its network initiatives, including more flights at its Charlotte (CLT), Dallas/Fort Worth (DFW) and Washington Reagan National (DCA) hubs, take hold.

Capacity growth is also expected to return to normal levels once the 737 MAX returns to the skies, and Airbus A321neo delivery delays abate.