American Airlines' Cool, Reinvented Museum Is a Joy Not Just for AvGeeks 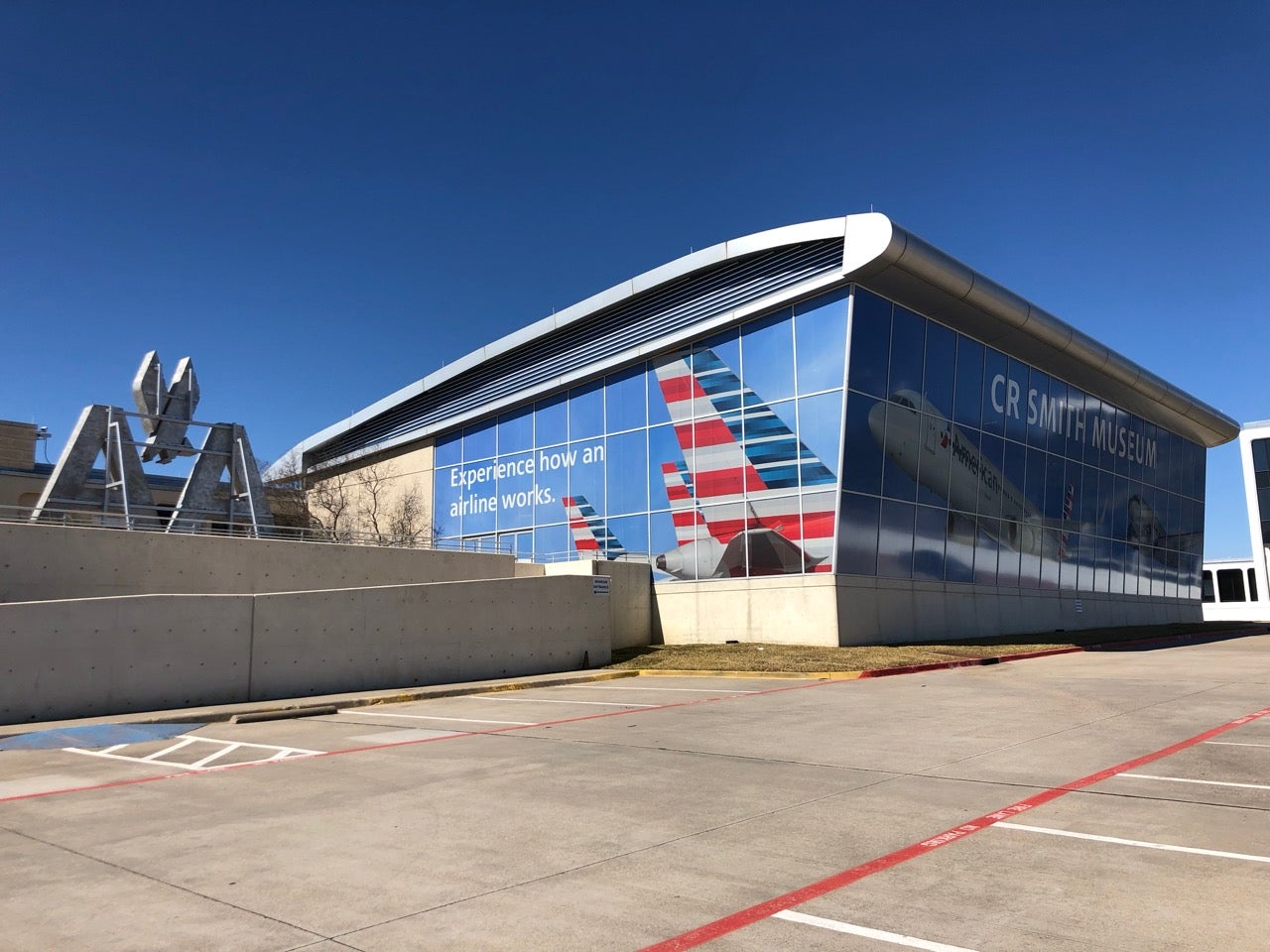 American Airlines' Cool, Reinvented Museum Is a Joy Not Just for AvGeeks
This post contains references to products from one or more of our advertisers. We may receive compensation when you click on links to those products. Terms apply to the offers listed on this page. For an explanation of our Advertising Policy, visit this page.

Aviation museums usually follow a standard formula: static displays of aircraft alongside memorabilia cabinets and airplane models galore. Although pegged to a fast-changing industry, the museums themselves often are dated temples to the past, appealing mainly to die-hard enthusiasts and industry employees.

The American Airlines CR Smith Museum is bucking that trend, reimagining what it means to be an airline museum with a 21st-century interactive bent.

Located on the American Airlines campus just minutes from Dallas/Ft. Worth Airport (DFW), the museum -- named for aviation pioneer and former American CEO Cyrus Rowlett Smith --unveiled its remodel last fall. It was the first major redesign since it opened 25 years earlier, and almost 300 American Airlines team members participated in the comprehensive renovation.

On a recent quiet Sunday when the museum was closed, I was given an exclusive behind-the-scenes tour.

One of the first steps in re-imagining the museum was to hire an executive director from outside the aviation world. The choice was Uli Das, a former director at the American Museum of Natural History in New York.

While Das had no previous experience in aviation, she said she quickly realized that "people are unbelievably passionate about aviation. I came from natural history museums that are very venerated. I thought nothing in the world could ever get anyone as excited as dinosaurs."

What she found, however was a museum that "was out of step with where the industry and airline is. So it was overdue, really, for an overhaul."

This revitalized museum is certainly no dinosaur.

Some 35,000 square feet of interactive exhibits celebrate the history of American and its many legacy carriers, provide an inside look at how the airline operates and put the people who make the airline tick front and center.

Das said in creating the new experience, the CR Smith Museum took a different route from some of its colleagues: "There certainly are museums like the Delta Flight Museum and others that get closer to explaining the operation of the airline, but in most cases there was still a big emphasis on the impressive physical infrastructure of airplanes.

"That's a really great experience, it's just different from what we're doing."

As an AvGeek, I was a fan of the original CR Smith Museum so I was extra keen to see the 15 new hands-on, immersive experiences. But I wondered: Had it been dumbed down?

My fears would soon be allayed. Here's what you should know about the new exhibits:

The most ballyhooed new exhibit is the installation of an authentic fully-powered McDonnell Douglas MD-80 cockpit. The exhibit offers narration from New York LaGuardia-based Airbus A320 and former MD-80 Captain Kent Wien as spotlights illuminate the part of the flight deck he's describing.

Atlantic Models and Pacmin's staggeringly detailed large-scale models are suspended from the ceiling of the museum. AA and legacy airlines are the stars of the skies here, with many of the one-of-a-kind models repainted in predecessor airline liveries such as US Airways, TWA, Eastern Shuttle, Ozark, Trans Caribbean, Air Cal, Reno Air and more.

AA ephemera is on full display in the History of American Airlines exhibit. This part of the museum was actually downsized during the overhaul, but what remains is the best of the best. Four cabinets feature vintage timetables arranged like a fan, posters, cutlery, china, magazines, SABRE reservation computer terminals, vintage AstroVision entertainment inflight TVs and promotional materials -- and that's just for starters.

Full-size cutaway jet engines from a 707 and 767, an original high-top bar table and a Wurlitzer organ from an AA 747 upper deck lounge can also be found here.

If you are hankering to sit in old airline seats from the 1980s, place a phone call with an 1980s vintage AirPhone (spoiler: it doesn't really work) or check in for a flight at a 1970s ticket counter, you've come to the right place.

American's IMAX-like movie experience has always been a staple of the Smith. The theater features stadium seating with 1990s-vintage AA first-class seats. Why I Fly is a new 14-minute movie that highlights AA team members and their stories, rather than focusing on flying metal like its predecessor.

The Miracle on the Hudson, which had been a glaring omission at the old museum after American's merger with US Airways, now looms large in company history. The miracle of flight 1549 is captured in exhaustive detail in a multi-paneled display.

At the heart of the museum is the very impressive Airline Command Center exhibit. This interactive touch-screen experience is meant to capture the essence of the nearby nerve center of the airline, the Robert W. Baker American Airlines Integrated Operations Center.

Visitors will gain an appreciation for the challenges of running an airline in the face of weather and operational hitches as they are confronted with decisions such as deviating, delaying or cancelling flights to get customers safely to their destinations.

The Baggage Loader exhibit is tougher than it looks. We put museum director Das and myself to the test to compete with the clock and stack the luggage to get it where it belongs. We also had to take into account the weight and balance of the plane while making sure we didn't load anything that wasn’t approved for the flight.

Most people fortunately have never experienced going down an evacuation slide. The museum offers you your chance.

On a more somber note, there were 151 American Airlines crew and passengers (including the hijackers) aboard AA flights 11 and 77 that were among the 2,996 people who perished in the attacks of September 11, 2011. The 9/11 Memorial area at the museum is a somber tribute, with walls lined with moving letters of support from people and airlines all over the world, along with the flag hoisted from the very first AA plane to resume flying after 9/11.

AA uniforms from the 1930s to the present are showcased throughout the museum. Some hold up quite well while others suggest a fashion emergency.

C.R. Smith and American Airlines famously launched the DC-3 and lovingly protected in a covered glass annex of the museum is Flagship Knoxville, a pristine retired 1940 Douglas DC-3 that began its life with the airline. This particular DC-3 was purchased by The Grey Eagles, an American Airlines retired pilots group, and restored by retired and active American Airlines team members before being presented to the museum when it opened in 1993. Step aboard this ancient tail dragger and travel back in time.

The Museum Store has something for every AvGeek. The store ships merchandise anywhere.

Though American is its largest donor, the CR Smith Museum actually is not owned by AA. It is a nonprofit organization that depends on revenue derived from memberships, the store, event rentals, ticket sales and financial and artifact donations to operate.

The CR Smith Museum should be at the top of any #AvGeek wish list, but will also provide plenty to interest everyone. Consider pairing it with other nearby aviation attractions such as the Frontier of Flight Museum or plane-spotting at DFW Airport's Founder's Plaza.

The museum, located at 4601 Texas Highway 360 in Fort Worth, is open Tuesday to Saturday from 9 am to 5 pm CST. Admission is $9 for adults, and $6 for college students, active duty military, children 2 to 17 and seniors 65 and older. Airline employees and certain family members are admitted for free.

Photos by the author unless otherwise noted.