Wheels Up: Everything You Never Thought You Wanted to Know About Aircraft Tires

Articles
Mike Arnot is the founder of Boarding Pass NYC, a New York-based travel brand and a marketing consultant to airlines. A private pilot, he can sometimes be found above the skies of New York City.
Follow
May 10, 2019
•
7 min read 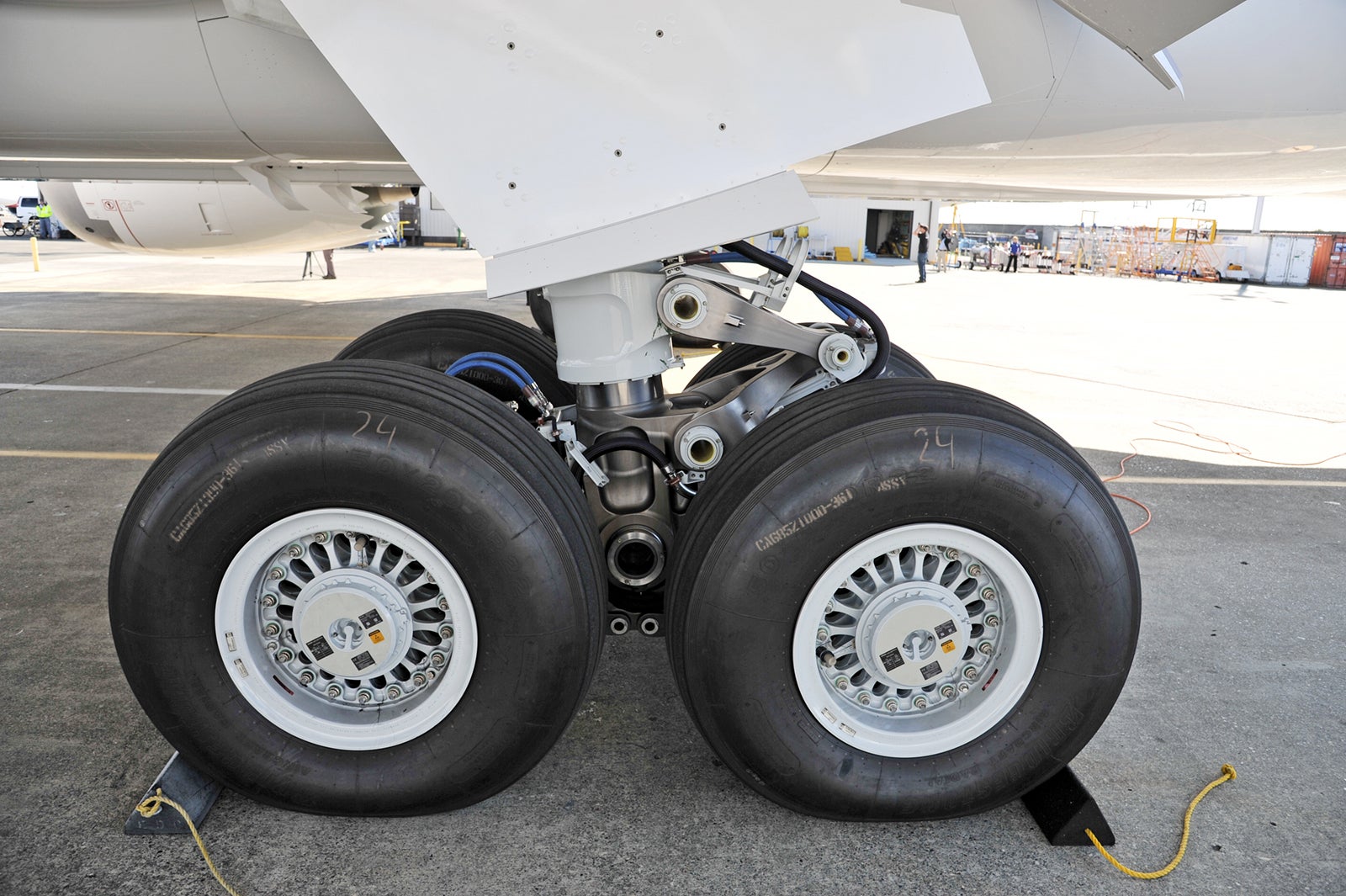 They're chest high on the average person: the Boeing 787 Dreamliner's tires are a whopping 54 inches high and 20 inches wide. And they have to be. They, and the landing gear, carry as much as 255 metric tons of weight and roll at around 155 miles per hour at takeoff, or about 170 on landing. There's a good reason you see a huge plume of burnt rubber on landing, smell it if you're near the runway, and why the runway itself is covered in black rubber.

TPG connected with British Airways' Chief Technical Pilot, Captain Dean Plumb, to kick the tires (or tyres, as they call it across the pond). Plumb flies the Boeing 787-9, for British Airways.

Except that, as it turns out, pilots don't actually kick the tires.

“In the early days of flying there was a light-hearted phrase, 'kick the tires and light the fires,' to summarize the pre-flight checks...a source of amusement for all those who hanker after simpler times,” he said. “Modern aircraft tires are large, solid components and you’d certainly come off worse if you kicked them.”

The tires themselves have several grooves whose main purposes is to channel away water when rolling. On contact with the runway, the rubber pushes any water into the grooves, where it is expelled out the back. In contrast to a car tire, the tread pattern is very simple; the wheel is designed to roll down a smooth runway, making maximum contact with it. Any tread pattern would quickly wear off.

The main tires on the Dreamliner weigh 218 pounds, and the smaller nose wheel tires weigh in at 114 pounds. The nose wheel tires are slightly smaller and narrower since as they have less weight to support, Plumb said.

The tires themselves are inflated to six or seven times the pressure of a car tire, around 200 psi compared to 35 psi in your Corolla. And they are filled with an inert gas, dry nitrogren. It's called "dry" nitrogen because commercially available air contains moisture; moisture inside an aircraft tire could vaporize when the extreme temperatures on the tire on landing cause it to expand.

According to Plumb, both engineers and one of the pilots will perform separate pre-flight inspections—including the tires. “The engineers will usually get to the aircraft and spot the need for a tire change earlier than the pilot. The pilot’s walk around of the aircraft comes closer to the departure time and is a final cross-check that all is ok.”

So, what are they looking for?

On departure, when the pilot moves the landing gear lever to the up position, the gear retracts and braking is automatically applied to stop the wheels spinning.

"If this didn’t happen the wheels would cause significant vibration through the aircraft as soon as the aircraft started turning onto a new course," Plumb explained. A spinning wheel inside the wheel well would add to an effect called gyroscopic precession (beyond the scope of this article, but a bit like holding a spinning fidget spinner between your fingers.)

Plumb said that most modern passenger jets have a tire pressure indication on the flight deck displays, allowing the crew to view and diagnose problems as well as take precautionary measures. In addition, both the nose and main wheel assemblies are fitted with a pressure relief valve that comes into play if pressure becomes too high. Each wheel is also fitted with a pressure sensor.

“The good news is that modern passenger jets are designed so that the landing gear and remaining tires have adequate strength to accommodate a flat nose-gear or main-gear tire," he said.

In the event of a tire loss, "we would use normal landing techniques and would normally be able to taxi to the gate after landing without assistance. If there is unusual vibration, then we’d request a tug to tow us back, but that’s not normally required," he said.

"The only modifications to our normal procedures would be that if the flat occurred on a main wheel (where the brakes are housed) we’d use careful manual (rather than automatic) braking and, ideally, a small amount of reverse thrust. If the flat was on a nose wheel we would make sure that we lowered the nose with a little more ‘tender love and care' than normal," Plumb explained.

The main wheel assemblies have another nifty feature: thermal relief plugs, which melt to prevent tires from bursting if hot brakes cause excessive heat build-up.

The Rubber Hits the Road

On touchdown, those pressures and heat are borne by the tires and the landing gear. “The wheel will accelerate from nothing to over 1,000 rpm on touchdown almost immediately,” Plumb said.

“At that point other things happen to help the aircraft slow down, such as the wing spoilers fully extending so that the wing stops generating lift, and all of the weight of the aircraft can bear down on the wheels. This maximizes the efficiency of the braking systems, but means the tires and wheel assemblies have to be designed to be strong and forgiving," he explained.

“Some rubber will be left on the runway and airport staff will often clear these rubber deposits away during routine maintenance of the runways,” he added.

"Luckily for everyone, you need trained mechanics to change aircraft wheels!" Plumb said. "The 787 nose wheel tires are replaced on average between 400 to 450 landings, with the main wheel tires replaced on average between 300 to 350 landings." A team of two mechanics can change a nose wheel, he said, and a team of three can change a main wheel assembly.