Articles
Caroline Tanner covers news and travel for TPG. She is a journalism graduate of Mizzou and Northwestern.
Follow
July 08, 2021
•
7 min read 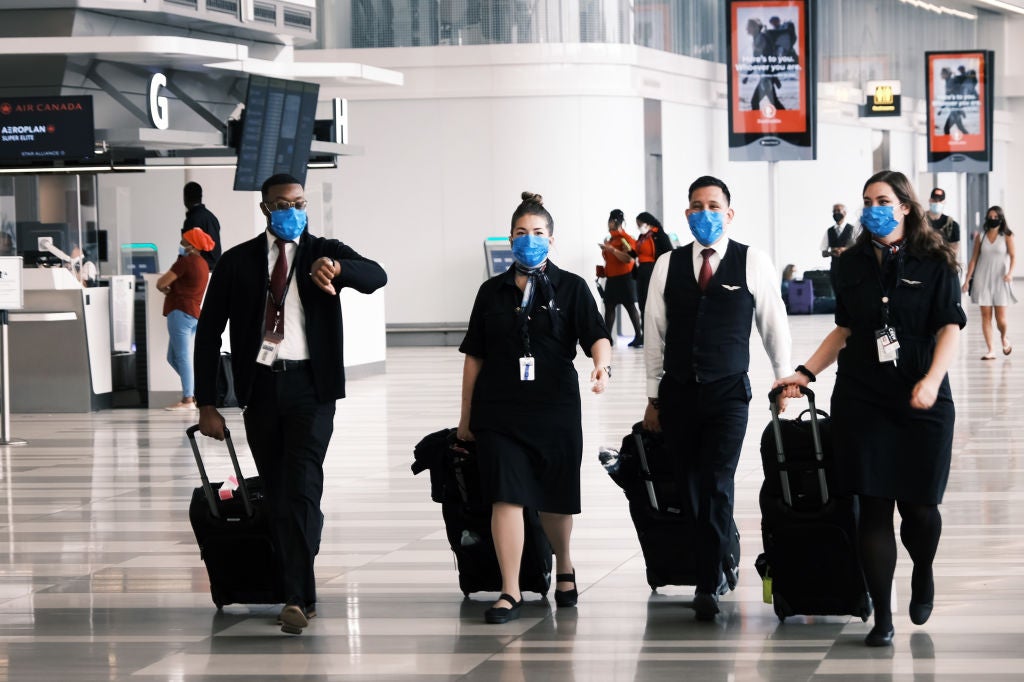 Airline hold times: Who's doing best right now?
This post contains references to products from one or more of our advertisers. We may receive compensation when you click on links to those products. Terms apply to the offers listed on this page. For an explanation of our Advertising Policy, visit this page.

Long hold times for customers attempting to get through to an airline customer service agent are nothing new and seem to have only gotten worse as more people travel this summer.

My colleague, David Slotnick, first reported in March how airline hold times were growing as passengers attempted to use more than 20 million vouchers and credits issued in 2020 by the biggest U.S. airlines, following nearly a year of many people forgoing travel due to the coronavirus pandemic.

In April, he determined that hours spent on hold with airlines had become the new norm, as this backlog led to airline reservation agents being inundated with calls to schedule new reservations, on top of the other customer service issues airlines deal with regularly.

By June, as more people started thinking about plans for summer travel, Slotnick found that many TPG readers were still experiencing issues, such as hourslong wait times and two weeks of callbacks before actually getting through to an agent.

Read more: Airline hold times are growing as passengers try to use millions of travel vouchers — a sign of the coming travel boom

While callback features are nothing new, American Airlines was the first major U.S. carrier to offer customers the option to request a callback within a seven-day window at a time of their choosing within business hours.

The airline launched their new, expanded callback feature about a month ago to address some of the call volumes resulting from both weather events and longer handle times while customers re-familiarize themselves with travel, a spokesperson for the airline told me.

American has since added hundreds of time slots to the schedule and are hiring additional reservation agents to keep up with the average hold time, which they noted has increased as customers have more questions about traveling than they did before the pandemic.

Seeing as American is the only airline thus far to allow you to select a callback time instead of waiting for hours on end, I reached out to our TPG community to see how its new feature compares to its competitors, specifically United Airlines and Delta Air Lines. Spoiler alert: American was the clear winner overall.

Senior travel editor Andrea Rotondo said she was "pleasantly surprised" to be on hold with American for just four minutes recently regarding using a flight credit for booking. TPG's director of travel content, Summer Hall, also was pleased.

"I can say it was an epic option," said Summer, who had to buy an expensive ticket on another airline due to a cancellation by American the week she was supposed to travel. "My heart dropped when it said an estimated four hours on hold just to cancel the flight they had jacked. They called back exactly when I asked them to and that part was blessedly painless."

Comments regarding American from the TPG Lounge Facebook group were also positive overall, minus one outlier who said they were quoted an eight-hour wait time.

Read more: The 9-hour wait: Here’s why airline hold times are so bad

Next, I looked at feedback regarding United Airlines, which fell somewhere between American and Delta.

TPG reader Pru Sowers told us via email that United recently quoted her a wait time of over seven hours for an inquiry about fees for combining miles from his two different accounts for a trip he had been planning to Africa for two years.

United, which initially failed to respond to three requests for comment for this article, responded after publication to dispute the passenger's account.

"The customer said she was quoted a 7 hour wait time – it’s just not possible, we don’t even have a recorded voice file that says “7 hours” and we also have no record of this customer calling one of our contact centers in the last 60 days," Leslie Scott, Managing Director, Global Response and Corporate Communications, said via email. She did chat with us via the website and was quoted a 40-minute wait."

In May, United added 400 flights to its July schedule to address growing demand, operating at 80% of its pre-pandemic levels.

Out of the three airlines I focused on, Delta by far fared the worst. More than a quarter of the nearly 100 responses from the Facebook group were critical of Delta.

While Delta was unable to specify an average wait time, a spokesperson did tell me via email that a three-hour window was provided yesterday, which suggests that it varies by day. "The challenging summer weather across the northeast yesterday is contributing to the volume today," they said.

Delta has also ramped up hiring as customers gradually return to travel.

TPG's senior travel reporter, Victoria Walker, shared that her cousin was given a nine-hour hold time two weeks ago for Delta.

Read more: All of the elite qualification changes you need to know about for 2021

While American, United and Delta were highlighted for this story, they are certainly not alone in dealing with managing an influx of calls from customers. I received comments from people with similar complaints about other airlines, both domestic and international, including JetBlue, Hawaiian Airlines, Scandinavian Airlines, Iberia, Cathay Pacific, TAP Air Portugal and Lufthansa.

On the flip side, our Facebook users had only positive things to say about Singapore Airlines, British Airways, Qatar Airways, Turkish Airlines and Alaska Airlines.

Remember, if you fail to reach an airline by phone, or just give up holding due to headache and frustration (and who could blame you), try submitting your request via their social media channels. Just be aware, you could see a message like this:

"In April, American Airlines' response time to my Twitter DMs about a reservation was under 15 minutes, at 11 p.m.," said Josh Leibner, who works in marketing for TPG. "Great alternative to waiting on hold with their call centers."

Regardless of the airline, you are likely to experience holds of some sort depending on the day, although possessing status as a frequent flyer appears to help with expediting the issue.

"I’ve personally used the call-back feature with Alaska and United, and it worked very well with both airlines. My call-back times were faster than the initially provided time estimates. Of course, that could be an intentional strategy to set low expectations for the caller and then exceed them," Henry Harteveldt, a travel industry analyst based in San Francisco, said via email. "I have also witnessed JetBlue’s call back feature in action, which repeatedly failed. It’s a reminder that just because an airline may use a particular type of software, it has to effectively manage its use of that software, and make sure it has adequate people available to help customers. Otherwise, no one benefits."