12 Aircraft You Can Sleep or Dine In 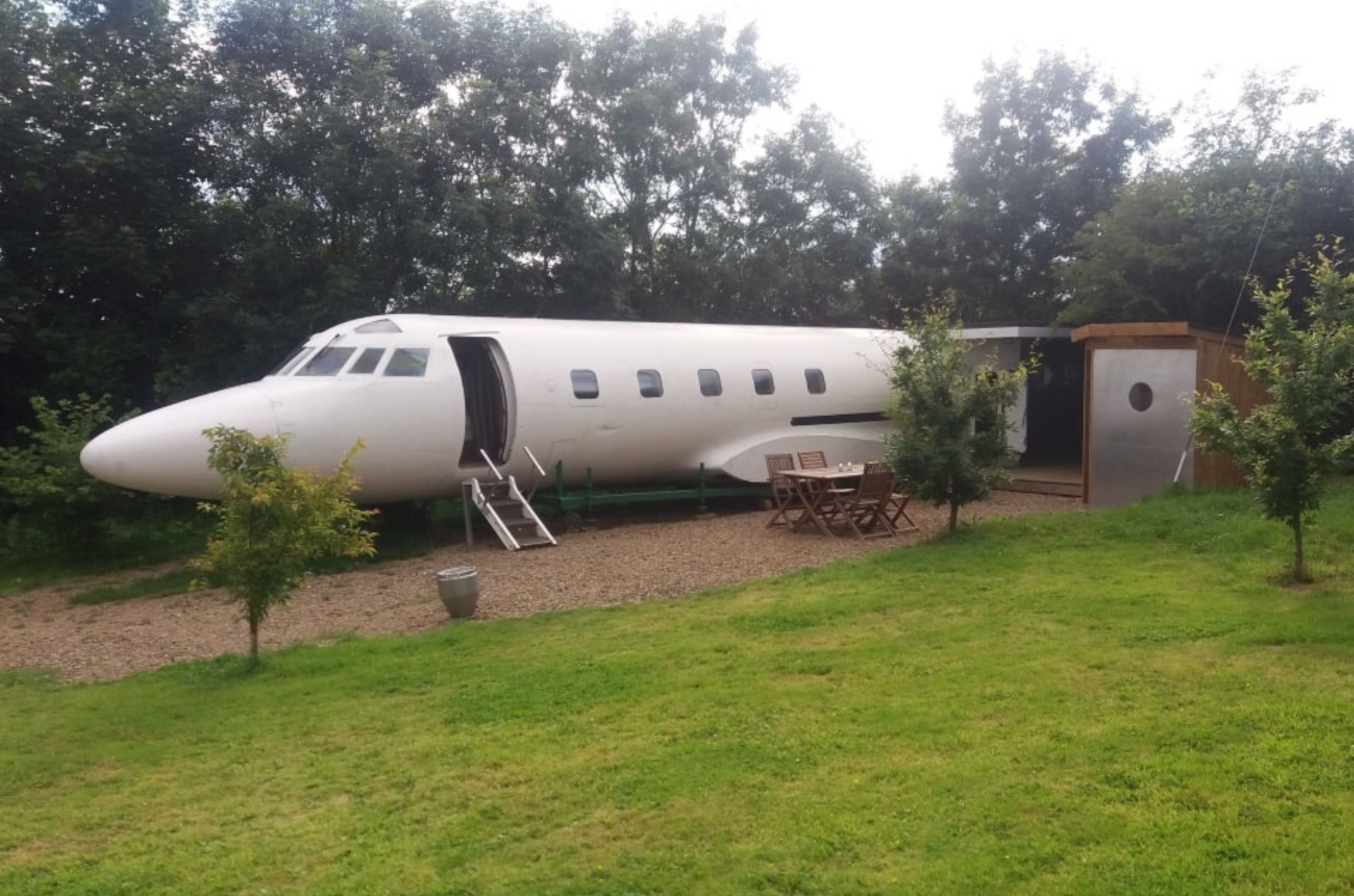 Most aircraft end their days in the scrapyard. Large empty spaces, often in deserts, are filled with row upon row of planes that airlines can no longer use economically, stripped of any valuable parts and spares. Many are recycled for their metal, mostly aluminum.

But a lucky few get a second life in a rather different role: they become hotels and restaurants. They will never fly again, but they get to host people — a reminiscence of their previous career.

For example, in 2014 Dutch airline KLM teamed up with Airbnb to re-decorate the interior of one of its retired McDonnell Douglas MD-11 aircraft as if it was an apartment, and held a contest to give away stays in it, like a regular Airbnb. That was a publicity stunt more than anything else, and the airplane later ended up scrapped anyway. But there are quite a few spots around the world where you can spend the night inside a real aircraft, or just have dinner or coffee in one.

Not quite like sailing the skies at 30,000 feet, but still a way to revive some of the former glory.

Here are some of them.

This is perhaps the best-known aircraft hotel in the world, offering the chance to stay in no less than the Queen of the Skies.

There are 74 beds, divided into dormitories and rooms, plus a suite in the cockpit. Shared four-bed rooms start at $50, while the cockpit suite starts at $204.

TPG editor-at-large Zach Honig had the chance to visit recently -- stay tuned for a review!

This particular aircraft, built in 1976 for Singapore Airlines and then sold to Pan Am, last flew in 2002 with Swedish airline TransJet. It was then stored, no longer airworthy, at Arlanda airport (ARN) in Stockholm until it re-opened as the Jumbo Hostel in 2009.

At this Costa Rican hotel in the jungle, you can sleep not just in one, but two different aircraft.

A 1965-vintage Boeing 727 that used to fly with Colombian airline Avianca has been totally refurbished with teak wood furniture and linings on the inside, and placed on a 50ft pedestal with views of the ocean.

The concept must have proven a success since the hotel recently added a front fuselage section from a McDonnell Douglas MD-80, also with completely refurbished, cozy, wooden interiors -- which it calls the "Cockpit Cottage."

A Soviet-made Ilyushin Il-18 airliner that once upon a time flew for East German airline Interflug (including missions as VIP transport for the country’s leadership) has been converted into a magnificent suite for two, complete with sauna and Jacuzzi.

This one isn't cheap: prices start at $420 per night. Teuge is about 60 miles from Amsterdam airport.

It is difficult to classify Woodlyn Park. Is it a hotel? Is it a theme park?

A 1950s-era Bristol freighter aircraft is just one of the several unique lodgings, scattered around an old farm, where you can sleep. There are also a Hobbit motel -- this is, after all, New Zealand, home of the Lord of the Rings movies -- an old patrol boat, and a train.

To find the place, you'll need to drive about 100 miles south from Auckland. Prices start at about $120 per night.

A Sikorsky HH-3F Sea King helicopter that used to fly with the US Coast Guard is one of the attractions of Winvian Farm, a 113-acre estate turned into a luxury retreat in rural Connecticut, about 100 miles from Manhattan.

The chopper has been embedded in one the cottages. The cockpit has been left pretty much as it was, while the cabin has been turned into a cozy living room plus kitchen. Not enough room for the king size bed, though, which had to be left outside right next to the airframe.

Helicopters, it turns out, are expensive on the ground as well: The suite will set you back a minimum of $699 a night.

This is your chance to sleep in a private jet, although you won't leave the ground -- in this case, the grounds of Apple Camping in Wales, UK, where a four-engined Lockheed Jetstar can be had for $160 and up.

Built in the 1960s and 1970s to carry up to nine passengers -- Elvis Presley had one -- it can sleep up to four in its hotel incarnation.

An annex has been added at the rear of the cabin in order to fit a double bed, but the cockpit and cabin have preserved more or less the original state.

There's an Xbox game console in the cockpit with flight-themed games, too. Other than the monitor for the Xbox, the flight deck is preserved faithfully and looks ready to fly.

A hangar at the edge of Zurich airport provides a spectacular setting for this restaurant, whose centerpiece is a Soviet-made Ilyushin Il-14 aircraft. In military service between 1957 and 1992, it flew to its final home in Zurich in 2005.

While dining tables are arranged all around the aircraft, the cabin has been turned into a cocktail bar and lounge.

Not far from the Hotel Costa Verde in Quepos, Costa Rica, you'll find a Fairchild C-123 Provider military transport repurposed as a bar. Originally assigned to covert operations in support of the Nicaraguan contras, this twin-engine, propeller plane was abandoned at San Jose Airport, Costa Rica.

It was later bought for $3,000, disassembled and reassembled to serve as a bar next to one of Costa Rica’s national parks.

After the bankruptcy of national airline Ghana Airways, this DC-10 was nearly sold for scrap. However it was saved at the last minute and it opened as a restaurant in 2013.

It specialises in Ghanaian cuisine and has proven popular enough to merit its own entry in Wikipedia as well as numerous mentions in the international media, including our own. It's the second-biggest plane on this list after the 747.

Who said all McDonald’s are the same? In Taupo, New Zealand, you can have your Big Mac inside one of the most iconic aircraft in aviation history, a DC-3. There are thousands still flying after 80 years; this is an aviation legend.

The Boeing KC-97 was developed towards the end of the WWII, and in the initial years of the Cold War it fulfilled numerous missions such as troop transport and refuelling. It also sprung a commercial derivative, the Boeing 377 Stratocruiser.

This 1953 airframe has been turned into a dining room that seats 42 guests and sits today in Colorado Springs, Colorado.