These Are the Best Times to Visit Vietnam 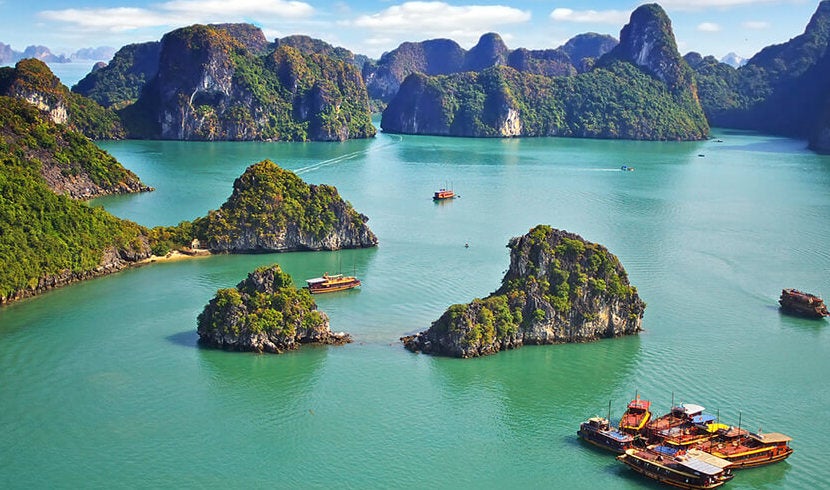 Vietnam has over 2,000 miles of coastline, densely forested mountains, rapidly growing cities and surrounding limestone islands, and its popularity as a travel destination has grown immensely in recent years — from five million visitors in 2010 to 15 million in 2018.

Ho Chi Minh City and Hanoi bustle with mopeds and motorcycles, while street vendors offer a culinary display of the country’s deeply-rooted history and culture. Vietnam's location in Southeast Asia, along with its ecological and cultural diversity, draws travelers from around the world, from budget-conscious backpackers to leisure travelers searching for a slice of paradise at its white sand beaches.

While the natural, cultural and historical wonders of Vietnam can be enjoyed throughout the year, the best times to go depend on where you intend to travel and what you’d like to do. Extreme weather is not uncommon in Vietnam, but this doesn’t mean you can’t visit during the rainy season. Simply put, make sure you’re prepared for whatever a specific region and season may throw your way.

The Best Weather in Vietnam

The weather in Vietnam can vary greatly between the northern, central and southern parts of the country. Due to the country’s topographical and ecological diversity, the weather can even differ within one region — for instance, the weather on one side of a mountain range may be significantly different from the opposite side.

In the north, winter — which occurs between December and March — can bring cooler temperatures even at lower elevations. In the mountainous northwest, it sometimes gets cold enough to snow. The dry season in the north is from October to April, but shifts later in the season as you head south (it doesn’t start until November around Hanoi). With summer (May through September) comes warmer temperatures and higher rainfall. Some of the best weather occurs in the spring and fall, which tend to remain dry.

Central Vietnam is hot and dry from mid-January through late August. Typhoons are not uncommon between October and December, with most of the rain occurring in November and early December. January through September is the best time to visit this region if you’re hoping to stay dry.

The temperature in the southern part of the country remains fairly consistent, often reaching the mid- to upper 90s regardless of season. The dry season takes place from November through April, and the wet season dominates the remainder of the year. During the wet season (May through October), the rain often comes in high-intensity afternoon downpours, leaving the rest of the day dry and sunny.

When to Visit Vietnam for Events

Tet Nguyen Dan, or Tet, is usually celebrated nationwide beginning on the first day of the Lunar New Year, which occurs in January or February. Tet is traditionally a time for people to spend with their families and welcome the arrival of spring. Because of this, busier cities like Hanoi tend to be less crowded, but there are no shortage of celebratory events.

Every year, hundreds of thousands of Buddhists from around the country make the pilgrimage to the Perfume Pagoda — a series of sacred caves — near Hanoi. Many arrive on the 15th of the first month (which often occurs in February or March) of the Vietnamese Lunar Calendar, which is when the Perfume Pagoda Festival takes place. While travelers can visit the Perfume Pagoda year-round, visiting during the Festival offers a glimpse into this long-lived tradition.

National Day, which takes place on September 2 each year, celebrates the day Ho Chi Minh declared Vietnam’s independence. This patriotic day is a great time to be in one of Vietnam’s major cities — specifically Ho Chi Minh, Da Nang or Hanoi — to experience the marches, fireworks, parades and other festivities.

Also known as Tết Trung Thu or the Full Moon Festival, the Mid-autumn Festival takes place during the eighth lunar month (usually mid- to late September). While this originated in China as a celebration of agriculture and harvests, Vietnam has its own unique traditions and ways to celebrate. Dancers and colorful costumes can be found in city streets, and illuminated lanterns accompany children as they sing songs while walking through neighborhoods.

When to Explore Vietnam’s Cities

Hanoi and Ho Chi Minh City are two of Vietnam’s most popular cities to visit. While an argument can be made for visiting both cities any time of year, some seasons have more of a benefit over others.

Hanoi, Vietnam's capital, is located in northern Vietnam and consequently experiences significantly different weather than south Vietnam’s Ho Chi Minh City. In the fall and spring, the weather in Hanoi tends to be mild and dry, while the weather in Ho Chi Minh City is most favorable during the winter. During the rainiest seasons, which occur from May to September in Hanoi and May to October in Ho Chi Minh City, travel plans can be disrupted, so travel to cities during this time may require flexibility — and plenty of rain gear.

When to Avoid the Crowds

Peak season in Vietnam generally occurs in the spring and fall throughout the country. Southern Vietnam can also get busy during the winter when the temperatures are cooler.

If avoiding crowds of other tourists is a priority, visiting during the summer is a safe bet throughout the country. In August (especially late August), daily temperatures may be slightly lower than in July but the fall crowds have not yet arrived. The colder temperatures in the north discourage many tourists from visiting the region during the winter as well, despite the fact that it is the dry season.

The Cheapest Time to Visit Vietnam

Historical data collected by travel booking platform Skycanner.com suggests flying to Ho Chi Minh City from New York is cheapest in November. Flights from Seattle, Chicago, San Francisco, Dallas and Los Angeles all tend to be the cheapest around September. With the exception of Chicago and Dallas, which are around $576 and $731 round-trip, respectively, the lowest prices usually fall in the mid- $400 range.

If flying to Hanoi from New York or San Francisco, the cheapest month to travel is October ($531 from New York and $446 from San Francisco). If you are coming from Seattle, Chicago or Dallas, August and September are likely your best bet, with airfare from Seattle and Dallas dropping to the upper- $700 range and mid- $500 range from Chicago. Flights from Los Angeles can be found as low as $501 in November.

An analysis of monthly data collected by hotel booking platform Priceline.com, looking at hotels 2.5 stars and above from 2017 to the present, shows average accommodation pricing across the country does not fluctuate much on a month-to-month basis.

“Priceline data reveals that hotel prices in Vietnam tend to remain close to the overall average daily rate of $85 per night, irrespective of the time of year,” Kevin O’Leary, Senior Analyst at Priceline, told TPG in an email. “While they do fluctuate, they rarely stray far away from the midpoint.”

According to historical data collected by Kayak.com, however, if you are headed for one of Vietnam’s major cities, you likely will experience both more price fluctuation and higher prices overall.

In Ho Chi Minh City, which recently ranked as Kayak.com's top three trending destination, hotels run between $102 and $131 per night, with July being the cheapest and December being the priciest months. Hotel prices in Hanoi are similar, with the cheapest prices found in February and July and the most expensive in October and March. Da Nang, which is located in central Vietnam, is one of the more expensive cities to spend the night in. Prices drop to around $152 in January and February, but frequently exceed $200, hitting a high of $238 in May.

While there isn’t really a “bad” time to visit Vietnam, the season will depict which region will have the best weather. Regardless of when you decide to travel, there will always be moderate temperatures and sunshine to be found somewhere in the country. And for those lucky enough to have a flexible schedule and a specific travel goal in mind, be sure to choose the appropriate season for the area you’d like to visit.

Related stories
Round-trip flights to London from US as low as $346
What are points and miles worth? TPG’s October 2022 monthly valuations
Alaska Mileage Plan top-tier members get intriguing choice of perks for 2023
The newest airline collectible is out: KLM’s 103rd Delftware miniature house
Featured image by Travel with Black Tomato to Vietnam's Halong Bay.