Articles
Elen Turner divides her time between Nepal and New Zealand, and loves to write about these beautiful and fascinating countries that she calls home. She writes about everything from travel with kids to trekking in the mountains.
Follow
Dec. 28, 2018
•
10 min read 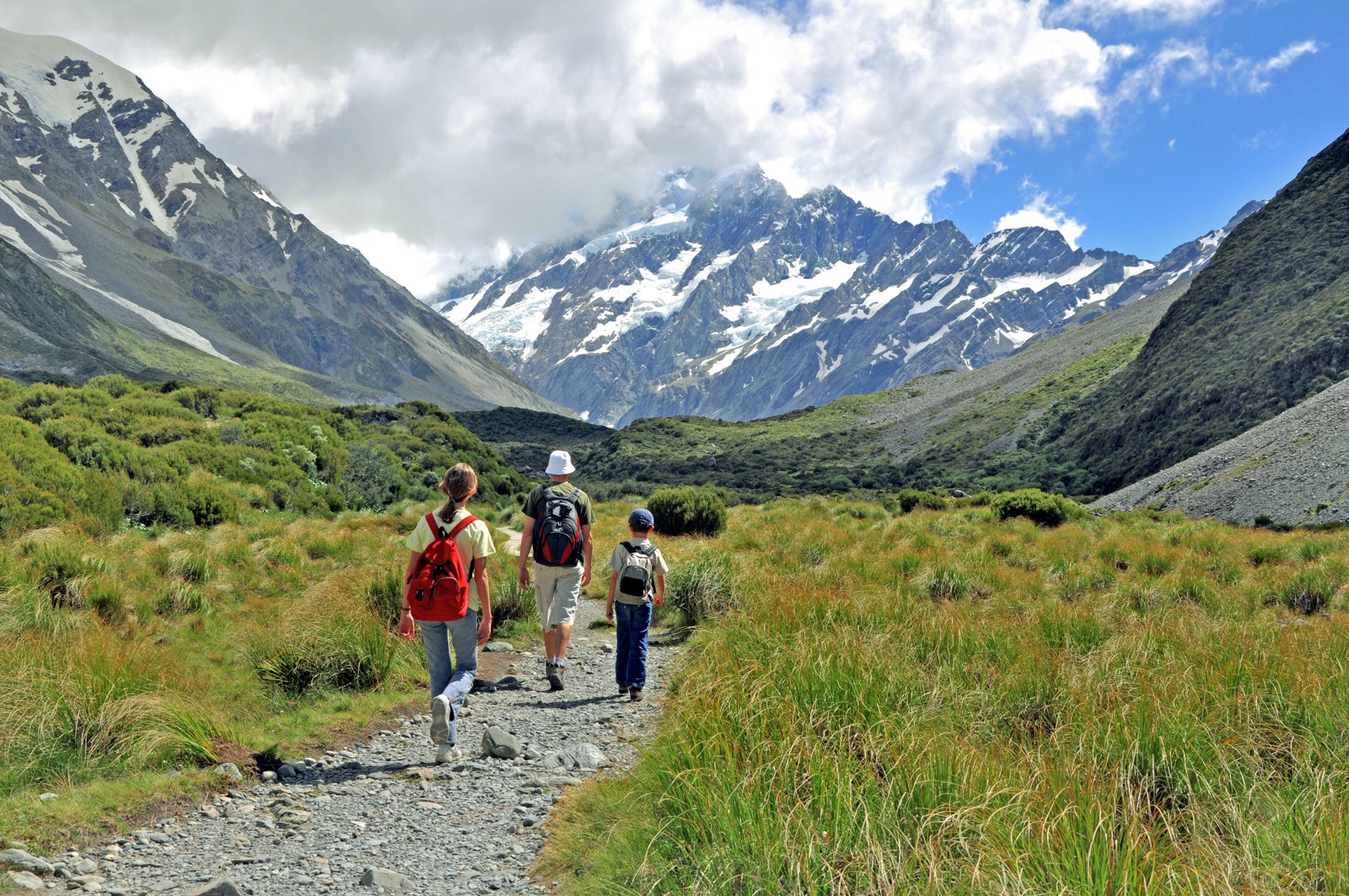 Getting to New Zealand almost always requires a long-haul flight (unless you're coming from somewhere like Australia or Fiji, that is). With kids, this can be challenging and potentially expensive. Families who do make the journey to New Zealand often want to keep in-country costs and hassles to a minimum, while increasing the comfort for their family. But, as New Zealand is a sparsely populated country with surprisingly large distances between attractions and locations, many travelers might think that renting a car or flying around the country are the only viable options for getting around.

They're not. Although New Zealand's rail network is not as extensive as you may find in Europe, it does connect many of the major points of interest: Auckland, the Tongariro National Park, Wellington, the West Coast, Christchurch, Otago and Southland.

Rail is an ideal way to travel with kids in New Zealand: The trains are spacious and comfortable, with food available and tables to sit at with your own packed lunches. There are good toilets and space for kids to move around. There are viewing decks to enjoy feeling the wind in your hair. The routes are incredibly scenic, and you could see many of the main attractions across the country just by going where the train travels and never having to fly or hire a car, or only doing so for a couple of days.

When traveling aboard The Great Journeys of New Zealand trains, you'll usually find two fare options -- both of which include unlimited free stopovers: Flexi, which is 50% refundable plus one free date change and Flexi Plus, which is 100% refundable.

Here's the lowdown on how to see the country by rail, from north to south by flying into Auckland and out of Christchurch (which could, of course, be reversed).

The Northern Explorer starts in Auckland and ends in Wellington, the capital. We priced a round-trip in March with unlimited and free stopovers. In US dollars, the Flexi ticket was about $120 per adult and $84 per child. As a comparison, the fully refundable Flexi Plus ticket was $147 per adult and $103 per child.

On the way to Wellington, the train passes through Hamilton, Otorohanga, National Park, Palmerston North and Paraparaumu. Going straight through takes about 12 hours, but stopping over at Otorohanga and National Park should be high priorities.

Spend a few days in Auckland on arrival in New Zealand. There are a wealth of family-friendly outdoor and indoor attractions, including museums, beaches, hiking trails and animal attractions. Auckland is, by far, New Zealand's largest city (with a population of more than 1.6 million) and has the greatest selection of hotels. There aren't tons of points properties here, but the Hilton Auckland is right on the harbor. Expect to pay between 44,000 and 60,000 Hilton points per night, depending on the time of year.

The Crowne Plaza, available from 40k IHG Rewards Club points, is smack dab in the center of the city. There you could use the annual award night from the IHG Rewards Premier Credit Card.

Continuing on down the line, Otorohanga is just 8.5 miles (14 kilometers) from Waitomo Caves, which both kids and parents will love. The underground maze of chambers, rivers and holes is full of constellations of glowworms. Staying at a motel or campground in Otorohanga and using a shuttle bus to the caves is a cheap and easy way to visit this must-see attraction without having to hire a car.

The next must-visit stop along the Northern Explorer route is at National Park, a tiny settlement that's the gateway to Tongariro National Park. Here there are three active volcanoes, ski slopes (in the winter), native wildlife and a famous day hike, the Tongariro Alpine Crossing, which shouldn't be underestimated but that can be done with older kids or younger ones in an appropriate hiking carrier.

Back on the train, travel the rest of the way to Wellington. The city has been called the “coolest little capital in the world,” and visitors seem to agree, despite the notoriously blustery weather. It's a midsize city with good museums, pleasant beaches, an attractive botanical garden and a funicular railway to reach it, and the Weta Workshop, a special effects company co-founded by Peter Jackson of “Lord of the Rings” fame that does fun “LOTR”- and “The Hobbit”-themed tours. The InterContinental Wellington (from 35,000 IHG Rewards Club points per night) is quite close to the funicular railway.

The Coastal Pacific travels along the Kaikoura coastline between Picton and Christchurch, in the northern part of the South Island. One-way fares with free stopovers in March were about $107 for adults and $75 for kids. Travelers who have come from the North Island can get the Interislander Ferry between Wellington and Picton (no undersea rail tunnels available). When we checked, the ferry from Wellington to Picton cost $228 one way for two adults, two kids and a car. For $27 more, you can book a private cabin, or add extras like meals ($13 per person for breakfast, for example). Picton is the gateway to the stunning Marlborough Sounds, with a wealth of outdoor activities like sea kayaking and vineyards.

The rail journey between Picton and Christchurch only takes five hours, but a stop in Kaikoura is highly recommended, as it's famous for migratory whales. The snowcapped mountains behind Kaikoura extend almost to the sea, and there are rewarding short hiking trails around. Then continue on to Christchurch. Unfortunately, Christchurch's historic center was decimated by an earthquake in 2011. But nearby Lyttelton, a port town, and Akaroa, with French heritage, are worth some time.

From Christchurch, connect to the TranzAlpine, which traverses the mountains between Christchurch and Greymouth. The one-way adult fare was $120 and $84 for kids -- and remember, that includes free unlimited stopovers. After leaving the flat Canterbury Plains, the train passes through the gorges and valleys of the Waimakariri River, and up to the Southern Alps and Arthur's Pass National Park and then down to Greymouth. The journey takes around five hours, so it doesn't need to be divided up anywhere. The beautiful mountain scenery on the way should keep all members of the family entertained.

Greymouth is an old mining town, with plenty of hiking, mountain biking and surfing opportunities. A particularly good hike is around Lake Brunner, a dark blue lake surrounded by forest and mountains.

The Seasider between Oamaru and Dunedin doesn't connect to the rail lines mentioned above, as Oamaru is about three hours' drive from Christchurch. But it's another option for travelers who land in Christchurch and want to make their way south. There's a bus linking Christchurch and Oamaru. One-way adult fares were $48 when we checked; kids' tickets were $10 and infants ride for free.

The Seasider stops at Moeraki for two hours to give travelers the chance to explore the famous Moeraki Boulders. These large, spherical balls of rock dot Koekohe Beach and are a fantastic photo op and place for kids to play.

The train continues to Dunedin, a lively and historic city with one of the country's best universities (and thus a large student population). Dunedin city has many museums, art galleries and parks/gardens to attract kids, and out on the Otago Peninsula are a wealth of opportunities to view wildlife, such as an albatross colony, penguin habitat and sea lions that hang out on the beaches.

If spending a few days in Dunedin, a day trip on the Taieri Gorge Railway is worthwhile. This short stretch of rail between Dunedin and Pukerangi/Middlemarch is scenic, passing through 10 tunnels and many bridges and viaducts that will keep kids entertained. The return trip to Pukerangi takes four hours. This round-trip journey was about $71 per adult, $19 for kids and infants are free.

If you are keen to hire a car for a couple of days, or take a mid-distance bus, a few side-trips to these rail journeys are advisable:

Exploring New Zealand by rail could be the most practical way for your family to see as much of the country as possible without breaking the bank. We recommend purchasing your train tickets with a credit card that earns a bonus on travel and doesn't pass along a foreign transaction fee, such as the Chase Sapphire Reserve.

Have you visited New Zealand with your kids? What destinations were hits or misses?