The 8 best destinations to visit in March

Articles
Jordi Lippe-McGraw is a writer covering travel, family, food and wellness for outlets like Conde Nast Traveler, Travel + Leisure, the New York Times, Forbes, and more. She has traveled to more than 30 countries on all 7 continents (including Antarctica at 5 months pregnant) and is an avid puppy, penguin, and truffle lover.
Follow
Feb. 15, 2022
•
9 min read 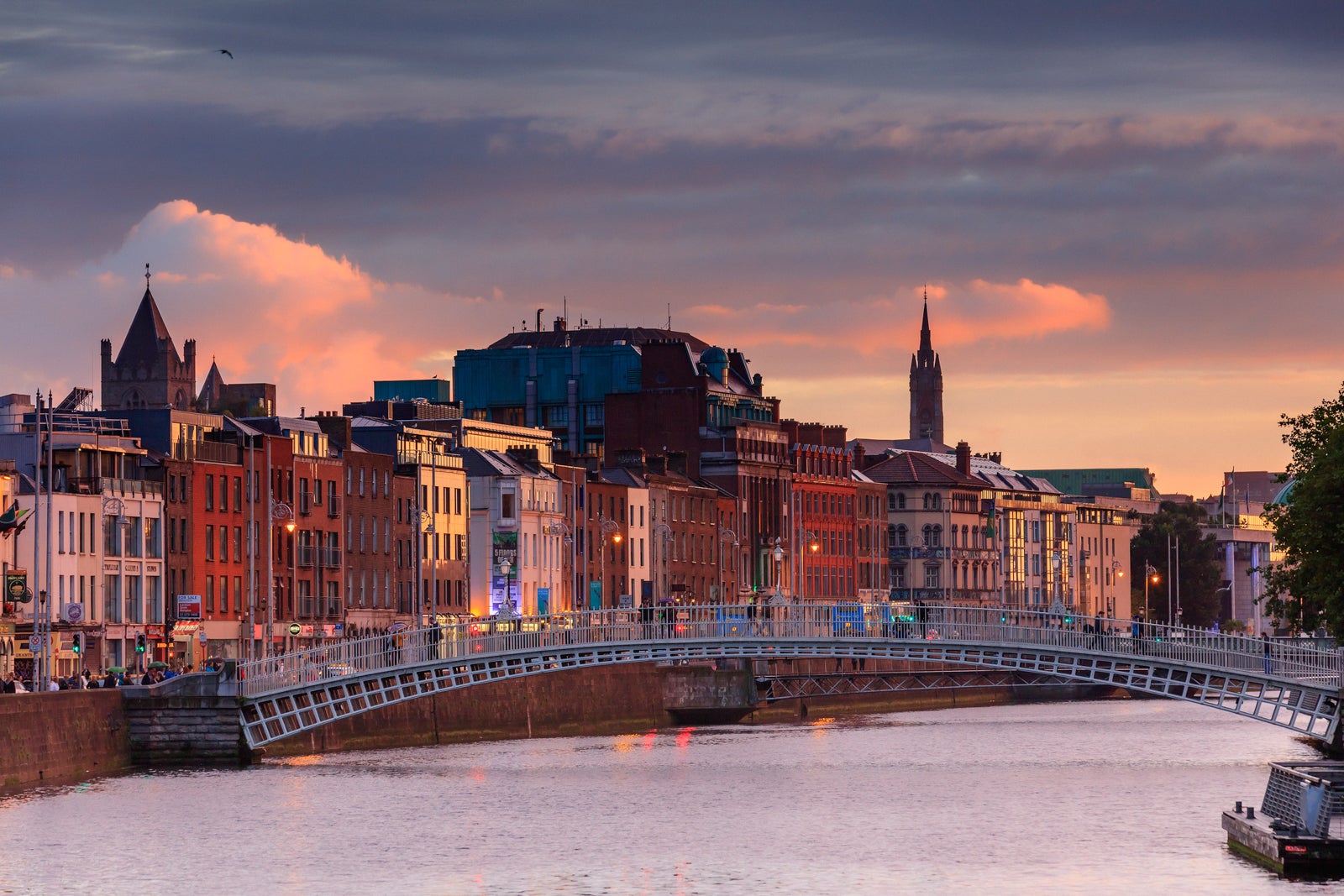 Puxatony Phil predicted six more weeks of winter, so by March you'll probably be itching to get out of town. The month will be arriving just as the omicron wave of COVID-19 wanes and more countries relax their travel restrictions.

While March can be a notoriously tricky time of year in terms of weather — and lacks many commonly observed holidays — it's also a great time to travel. You're not dealing with the April school-break crowds and temperatures are more comfortable in many destinations. Plus, there are St. Patrick's Day — and often Mardi Gras — celebrations to enjoy.

Of course, COVID-19 is still a concern, but case rates have dropped significantly since the peak in January, and children under the age of 5 could soon be getting their first vaccine doses, adding another layer of protection for worried families. Hopefully, this will also mean fewer canceled flights caused by staffing shortages.

When making any vacation plans, always review the latest recommendations from the U.S. Centers for Disease Control and Prevention, advice from medical experts and the specific travel guidelines for any international countries you plan to visit. That way, you're safe and prepared.

With that said, get excited to travel to one of these top March destinations.

There's no question New Orleans is a top destination in March. Why? Well, Mardi Gras this year falls on March 1 — which means the city will be bustling with beads, masks, king cakes, parades and parties. While prices for hotels are likely to be higher during this time, it's a bucket list celebration that's not to be missed. Plus, you can extend the trip to check out other famous sites like Bourbon Street in the French Quarter, Café Du Monde (home to mouthwatering beignets) and Jackson Square.

TPG tip: When it comes to Mardis Gras, it's all about location. The Roosevelt New Orleans, A Waldorf Astoria Hotel (from 70,000 Hilton Honors points per night) is right on the edge of the French Quarter. If you want something close, but a bit away from the action, book a room at Hotel Indigo New Orleans Garden District (around 58,000 IHG Rewards points per night).

Related: New Orleans is more than just Bourbon Street — here’s what to see and do as a family

There's no better place to celebrate St. Patrick's Day than in the saint's home country of Ireland. The annual parade will return to Dublin for the first time in three years, and the government hopes it will bring a nice tourism boost. But it's more than just the parade on Paddy's Day: There's a five-day festival this year taking place at Festival Quarter at the National Museum of Ireland in Dublin that will include music, food, crafts and beer galore.

Related: These Michelin-starred restaurants in Ireland are worth hopping on a plane for

If you can't make it to Ireland for St. Patrick's Day, Chicago's St. Patrick's Day Parade on March 12 is a great option. The unforgettable celebration includes the Chicago River being dyed green and the city's Irish pubs offering specials on everything from pints of Guinness and shamrock shakes to potato dishes.

March also happens to be the second-most affordable destination in terms of hotel prices, which should average about $191 per night, according to new Expedia data. Of course, you can explore other classic attractions too, as temperatures start to warm up into the mid-40s — try The Art Insitute of Chicago, Magnificent Mile, Navy Pier and The Bean in Millennium Park.

TPG tip: The InterContinental Chicago Magnificent Mile (from 27,000 IHG Rewards points per night) is just steps away from all the action. Or you can book the Hyatt Regency Chicago, perched right on the Chicago Riverwalk, from just 9,000 World of Hyatt points a night.

Catch the end of northern lights season, one of the world's wonders, in Iceland this spring. Seasonally visible through March, this naturally occurring phenomenon results in beautiful colored light displays dancing across the night sky.

While it's possible to see them from anywhere in the country, it's best to find a more remote spot away from artificial light to increase your chances. That's why Hotel Ranga in Hella is one of the best places to stay to see the aurora, as its secluded location provides darker skies and minimal artificial light interference. Another great option is ION Adventure Hotel in Nesjavellir, which you can book for around 60,000 Marriott Bonvoy points per night.

TPG tip: While in the southwestern part of the country you can also visit the charming capital of Reyjkavík for dining and shopping and check out area attractions like the Blue Lagoon and Caves of Hella.

Related: 9 reasons you should visit Iceland this summer

Calling all baseball and beach lovers: Fort Myers has a lot to offer on both fronts. If contract talks can be resolved, the long-awaited baseball spring training season will begin again in late February, with games for the Boston Red Sox and Minnesota Twins taking place through March 29, 2022, at JetBlue Park and Hammond Stadium in Fort Myers.

Meanwhile, animal lovers can enjoy the region's gentle giants in a non-captive environment as manatees flock to the warm Gulf Coast waters during winter, with peak season running from February to March. At Manatee Park, you can greet an entire aggregation (or group of manatees) from atop a boardwalk or kayak, canoe or paddleboard through mangrove estuaries alongside the gentle giants.

Of course, that's in addition to enjoying some classic sun and sand, which the area has in abundance as well.

TPG tip: According to a recent Google Flight search, you can find fares from New York City to Fort Myers for as low as $75 round trip. From Chicago, you can find flights for as little as $62, and from Seattle, it's possible to fly there for around $170 round trip.

Every March, musicians worldwide fill the streets and beaches of Zihuatanejo on Mexico's Pacific coast with their distinctive sounds and styles at the annual Zihuatanejo International Guitar Festival.

The community-run music event will feature a series of concerts from March 5 to 12 at various locations in this longtime creative hideaway and sleepy fishing village, located northwest of Acapulco, Mexico. In addition to the music, Zihuatanejo is designated as an official whale watching zone. Visitors can look for the migration of humpback and gray whales returning north with their newborns in tow in March.

TPG tip: Visitors looking to hear a combination of guitar chords and lapping waves can relax at the boutique beachfront Thompson Zihuatanejo (from 25,000 World of Hyatt points per night). The hotel supports the local art scene by inviting musicians to regularly perform during dinner and hosts a Market Night offering a piece of beach where local artisans can share their wares with guests.

Related: The zero-cost vacation: 100+ all-inclusive resorts you can book with points

Aside from the great weather — daily high temperatures are around 87 degrees Fahrenheit — March 18 is National Flag and Anthem Day for the island of Aruba, and there are often festivals and events to celebrate.

March is one of the driest months of the year in Aruba — and, even better, the island's government just announced it is easing entry requirements for all visitors.

That makes it the perfect time to lounge on the beach, go scuba diving or learn more about the island's varied history.

TPG tip: There are many points hotels available. As examples, you can book the Hilton Aruba Caribbean Resort and Casino for 80,000 Hilton Honors Points per night or the Courtyard Aruba Resort for 35,000 Marriott Bonvoy points per night.

March is an ideal time to visit Austin, thanks to South by Southwest (SXSW), the highly anticipated festival of music, technology and film, which this year is running from March 11 to March 20.

TPG tip: Stay at Hotel Magdalena in the popular South Congress neighborhood, or use your points to book a room at the Hyatt House Austin/Downtown, an excellent property in the heart of downtown from just 15,000 World of Hyatt points.