Spirit Stranded Me in An Airport For 11 Hours; Here’s How I Passed the Time 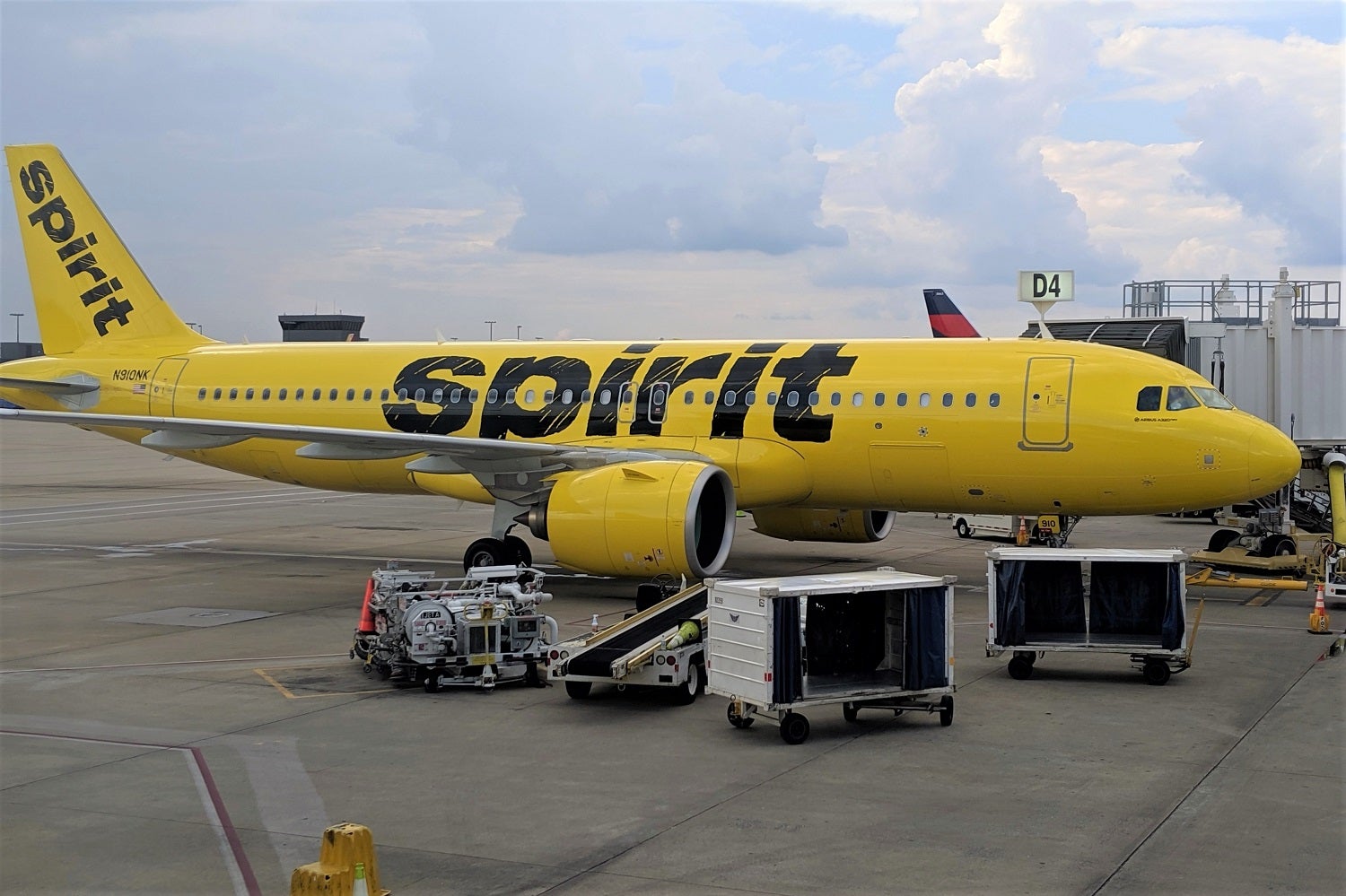 Spirit Stranded Me in An Airport For 11 Hours; Here’s How I Passed the Time
This post contains references to products from one or more of our advertisers. We may receive compensation when you click on links to those products. Terms apply to the offers listed on this page. For an explanation of our Advertising Policy, visit this page.

For 2019, I set a goal of flying at least 30 different airlines and staying in at least 30 major hotel brands. Although I've logged over one million miles on 75 different airlines, I'd never flown Spirit Airlines. So, when I planned to take a trip to Tampa from Atlanta, it seemed like an obvious choice to try out the ultralow cost airline for the first time.

Little did I know that it'd end up being both cheaper and faster to take a bus home from my destination after my original Spirit flight was canceled, and I was rebooked on a flight 11 hours later.

I fly enough to know that cancellations happen. That's why I book all of my flights with a credit card that offers trip delay protection. For now, that means I'm using my Citi Prestige, which earns 5x points in addition to providing travel protections (but, all of those protections are going away on September 22). Citi's trip delay protection paid out $1,000 in claims after Katie and I were stuck in Japan for four extra days due to a typhoon.

A typhoon is an understandable reason for a flight cancellation, but there weren't even storms in the area. The Federal Aviation Administration hadn't issued any ground stops or traffic programs for either Atlanta or Tampa for at least 24 hours. All of the other airlines were operating flights on time between the two airports. It was only my Spirit flight that was canceled.

There were a bunch of empty seats on my flight, so I suspected that Spirit canceled the flight to avoid operating a half-empty plane. However, every Spirit agent I spoke with denied this was the reason for cancelling my flight. One Twitter agent said "our records show that the cancelation was due to weather and ATC decisions." Another agent said the reason for cancelling was "due to an Air Traffic Control (ATC) decision related to weather issue." Both insisted that the cancellation was "outside of Spirit's control."

Kicking myself for not shelling out $19 for Freebird so that I would be booked on the next flight out, I settled in to spend the day working, eating and exploring Tampa's recently renovated airport.

Thankfully, I wasn't stuck in just one terminal, as the TSA doesn't care if you enter a different terminal than where your flight is departing. However, most airports have agents that will discourage you from entering the "wrong" terminal. In Tampa's hub-and-spoke terminal setup, there are agents checking boarding passes before boarding the tram to the terminal. I was able to get past these gatekeepers each time by explaining that I had a 11-hour delay on Spirit and wanted to explore the other terminals.

My wife Katie, who was traveling with me, and I were booked on separate flights for this part of our journey. While I wanted to check out Spirit, she was flying on American Airlines using Iberia Avios on a booking we used to confirm that Iberia was no longer improperly charging fees on AA awards. Her flight was departing out of Airside F, so I started my delay by joining her on the tram.

Once through security, I used my Citi® / AAdvantage® Executive World Elite Mastercard® to gain us access to the American Airlines Admirals Club. Now through November 1, 2019, cardholders — including up to 10 authorized users per account — are able to enter the Admirals Club whenever they're in an airport with an Admirals Club. That's true even if you're flying a low-cost airline like I was.

However, when visiting the Delta terminal later in the day, I wasn't able to enter the Delta Sky Club using The Platinum Card® from American Express. Although the Platinum Card grants you Sky Club access when flying Delta, the benefit doesn't extend to when you're flying another airline.

I was flying on a Thursday morning and had scheduled my flight early enough that I'd be able to work most of the day. And there was plenty to be done, so I spent much of my delay working from various spots throughout the airport. After seeing Katie off to her flight, I returned to the eerily-empty Admirals Club.

Thankfully, Tampa's airport has free Wi-Fi, plentiful power outlets and workstations throughout the terminals if lounges aren't an option.

Tampa airport has no lack of food options, and they aren't just the typical airport chains you'll see in other airports. The airport has worked hard to attract local restaurants, which means you can try out everything from the highly-regarded Ulele restaurant to the diner-style Goody Goody:

You can grab one last cafe con leche or Cuban sandwich before your flight:

Or, sit down to dine at the Tampa airport's location of the Columbia Restaurant, which has been an Ybor City institution for almost as long as Tampa has been in existence:

All of these are excellent options, but I stuck to free food options during this delay. I made breakfast out of the hard boiled eggs in the Admirals Club. Then, for lunch, I headed back to Airside F to eat at the somewhat new Priority Pass restaurant: The Cafe by Mise en Place.

I was able to enjoy a club sandwich, fries and a Blue Moon pint with my $28 Priority Pass allowance, meaning the meal only cost me a $5 tip:

Just remember that American Express Priority Pass memberships no longer have access to restaurant lounges -- as a sign posted at The Cafe by Mise en Place reminded visitors:

Rather than returning to The Cafe by Mise en Place for dinner — with a different Priority Pass card if needed — I left the airport for a bit to meet up with my dad for dinner.

As I travel the world with only what fits in my backpack, I'm not much of a shopper. So, I didn't pay too much attention to the shops, other than to notice that there was a wide selection — from a store selling Tampa sports team gear to a Tumi store.

For those flying out of Airside E or F, you can visit a duty free store — although the items you can purchase are limited if you're not flying internationally.

While I didn't spend any time shopping during my delay, I did splurge on one purchase: a 10-minute chair massage at the Spa Terminal Getaway. It'll be interesting to see if the Citi Prestige trip delay insurance will cover this expense.

The End of the Delay

At 7:45 p.m., I cleared security for the final time. By this point, my boarding pass had been checked and signed enough times that the TSA agents were signing over each other:

When I got to the gate just a few minutes after boarding was scheduled to begin, I was worried to find the boarding area practically empty. Thankfully the flight was still on time, and all of the passengers in the terminal had boarded more than 40 minutes prior to departure.

Approaching an idle gate agent, I cited the 11-hour delay and asked if I could be moved to a non-middle seat. The agent gave me an aisle seat in row 6, but I wouldn't end up flying in that seat. The flight was so empty that flight attendants needed passengers to move to the back section due to weight and balance issues. So, I ended up with a row to myself in the back section.

So, what did I learn from my 11-hour delay in Tampa?

Tampa airport is a great place to spend a day. Having grown up in Tampa and with family still there, I've been flying in and out of TPA for decades. During that time, the airport has significantly improved — particularly over the past few years thanks to remodeling the terminals and adding a new economy parking lot and tram. It's clear that the airport management has been intentional about making the airport as pleasant as possible, and the airport itself has now become a destination: Tampa airport gives non-travelers a chance to go airside. The "All-Access" program has been so popular that the waiting list is months long.

Security in Tampa airport is quick and efficient. Due to Tampa Airport's hub-and-spoke setup, I needed to clear security each time I wanted to visit a different terminal — meaning I passed through security around 10 times during my delay. Each time, the TSA PreCheck line never took more than a few minutes.

Use Freebird when flying Spirit. On my flight from Atlanta to Tampa, my flight was filled with passengers who'd also waited 11 hours when their morning flight had been canceled, and then I had to endure the same delay for my flight back to Atlanta. That's a pretty bad performance record. So, if I book Spirit again, I'm going to be sure to pay an extra $19 to purchase Freebird's quasi-insurance.

Don't be afraid to fight back. Since Spirit blamed my flight cancellation on weather and air traffic control issues, it denied providing compensation to anyone on the canceled flight. There's no public evidence to support Spirit's excuse for the cancellation, so I asked multiple customer service agents to explain where the weather occurred and when air traffic control issued a ground stop or traffic delay. Instead of providing any further information, I was offered a $50 travel voucher by one agent and $100 by another agent.

A Spirit spokesperson responded to my request for comment to say that my "flight was cancelled because of inbound crew impacted by previous day's weather throughout the system."

This post has been updated since publishing to reflect the response from Spirit.