Should You Select a Bulkhead Seat When Traveling With a Baby?

Articles
Darren Murph holds a Guinness World Record as the planet's most prolific professional blogger. He's an explorer at heart, having traversed nearly 50 countries and all 50 US states. He's flown over one million miles on Delta alone, and serves as a senior writer at TPG.
Follow
April 19, 2019
•
6 min read 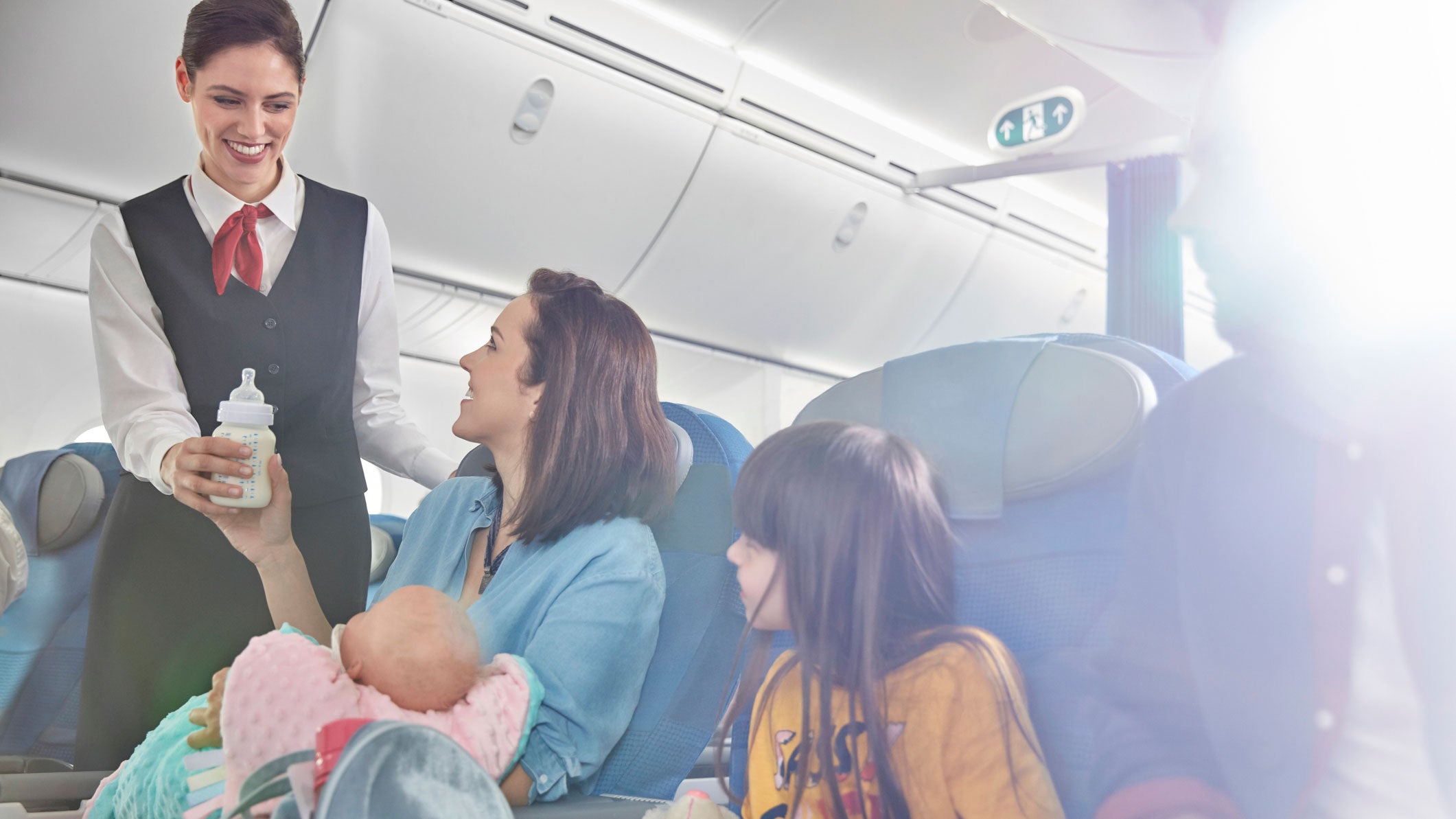 As someone who has flown more than a million miles, largely by myself or with my wife, I recently flew cross country for the first time with our adopted newborn. On one flight, I selected the bulkhead row, while I opted for a row just behind the bulkhead on the return. I was never a fan of bulkheads pre-parenthood, but I wanted to test it out with an open mind now that I had a little one in tow.

On some airlines, bulkhead seats are reserved for families traveling with lap infants. On wide-body jets commonly used for international jaunts, bulkhead rows typically allow for a bassinet to be mounted. Traveling with an infant is giving me new insight into airplane design and function.

More room for the diaper bag: I appreciated the larger-than-average gap between our bulkhead row (the first row of economy) and the rear of the first class cabin. Extra legroom is nice in every scenario, but that room to keep our son's diaper bag nearby made the flight much more enjoyable. Whenever we needed a bottle, a burp cloth or a pacifier, we had it within arm's reach — a particular godsend when the seat belt light was on, preventing us from reaching the overhead bin. However, know that sometimes selecting a bulkhead seat means that there will not be under-seat storage beneath the seat in front of you, as sometimes it is just a wall separating you from the next cabin.

Easier to pass baby between parents/caretakers: More room in the bulkhead made it easier for my wife and me to take turns holding Baby Murph. It also made it easier to shuffle things like snacks, drinks and baby paraphernalia without bumping the seat in front of us.

Better access to flight attendants: We weren't in the first-class cabin, but given our proximity to it, we could easily flag a lead flight attendant if we needed assistance in a pinch. When the line for the economy lavatories was long and we needed access to the changing table right this very second, it was easier to ask for permission to use the forward restroom.

Quicker deplaning: Our son seems to be a happy flyer, even at just a couple of months old, but that may not always be the case as he grows into a squirmier toddler. Because you never know when hunger will strike, it's never a bad idea to sit close to the exit. Being among the first to deplane got us into the terminal and into an airport lounge to regroup more quickly.

Immovable armrests: Most bulkhead seats have a hard divider between each seat, which I found to be quite irritating. On several occasions, I found myself yearning to raise the armrest so our son could lie flat and stretch out between our two laps, but this seat design prevented that.

Less accessible IFE: On our Delta 737-800, we found that the inflight entertainment (IFE) screen was tucked beneath the seat on an articulating arm. That's definitely a downside on the bulkhead row, as it made it more difficult to reach, position and use. Bulkhead row passengers also are asked to put their IFE screens away during takeoff and landing, and while our newborn doesn't yet care for screens, this could pose an issue for slightly older lap babies.

Far, far away from the changing table: While the first-class lavatory was merely feet from our seats, bulkhead passengers are supposed to use the rear lavatories like everyone else in economy. This means a long, long walk from your seat to the changing table, likely with a diaper bag in tow. It also means that everyone closer to the lavatory has a head start on lining up for access.

All bags up top (potentially): We were blessed to find that our bulkhead row had no hard divider between us and the first-class cabin, which meant that we could shove our diaper bag under the last row of first-class seats. On planes that still have hard dividers, you won't have that luxury. That means bulkhead passengers must put all of their carry-on baggage in the overhead bin, which is definitely troublesome if you need a bottle, toy, or blanket -- but aren't allowed to stand up.

After flying 4.5 hours with a newborn in a bulkhead row, and 4.5 more in a standard row, I think I'll opt for the non-bulkhead row going forward. Certainly there are positives to sitting in a bulkhead row, but they did not outweigh the negatives for us. That decision could change if a bassinet in the bulkhead was needed for a longer journey. But for us, the hard divider between seats is currently a dealbreaker, though I could see the added floor space becoming more important as our little one grows and becomes more active.

If you're flying on an airline without elite status, having a newborn could give you leverage to ask for seats in the bulkhead row, which typically cost extra (or are reserved for elite members). It never hurts to phone the airline after booking and ask for preferred bulkhead seating if you're traveling with a newborn or lap infant if that looks like the best spot for you on the flight.

Learning the ropes of flying with a baby? Here are some helpful tips: