Short cruises are cheaper, but are they right for you?

Articles
Fran Golden is an award-winning cruise journalist whose work regularly appears in Bloomberg, Travel + Leisure, Afar and other travel outlets. She is the author of several cruise and travel books, including “100 Things To Do In Alaska Before You Die." Fran lives in Cleveland, Ohio. Although fond of lake Erie, her first love is the sea.
Feb. 26, 2022
•
9 min read 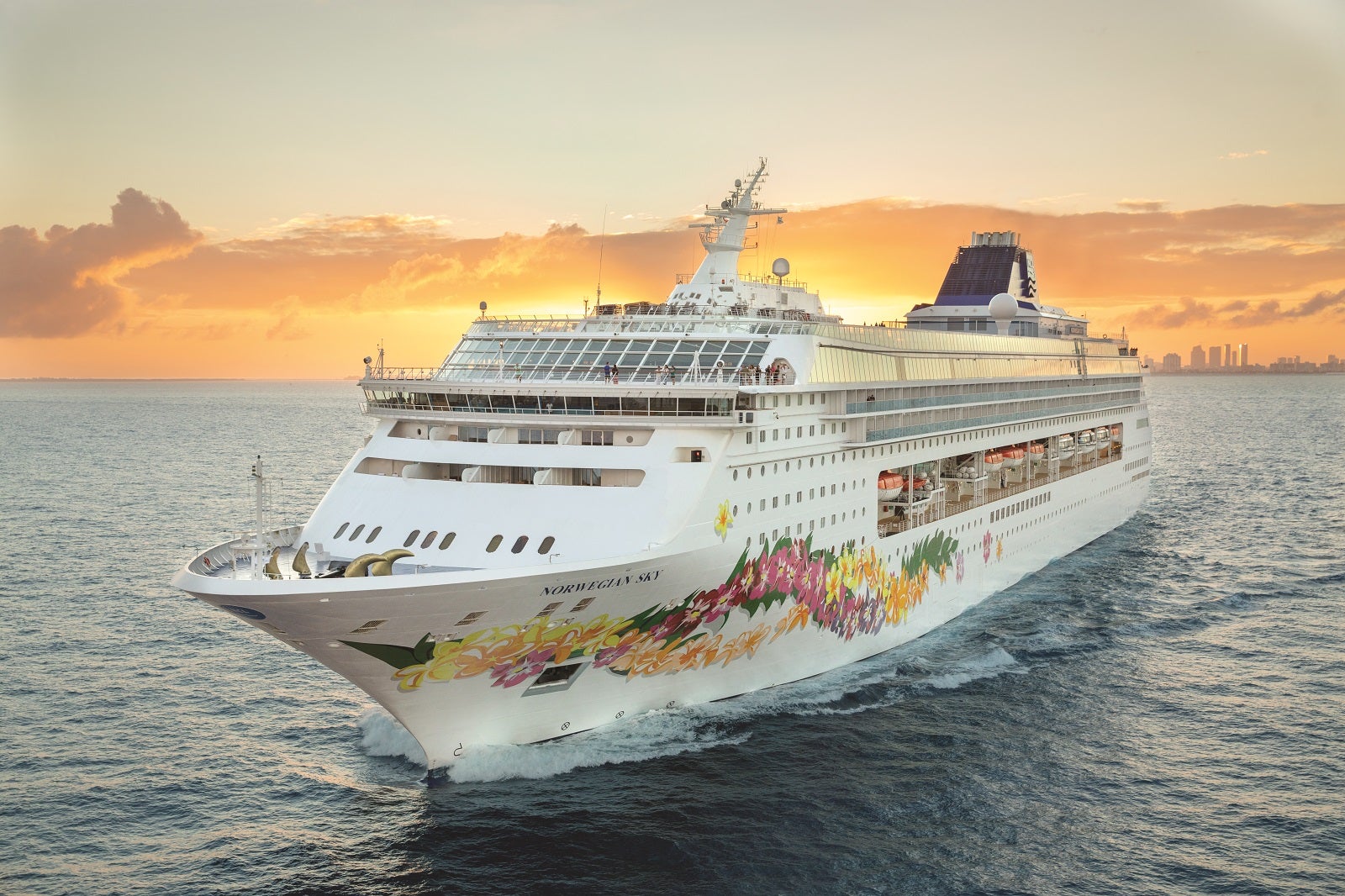 Maybe you are a first-timer who has never cruised before who is looking to test the waters. Or maybe your boss won’t give you a whole week off, so you’re seeking a quick getaway. Do you desperately need a break, but your budget can’t handle a full-week cruise vacation? Short three- to five-night cruises are your ticket to fun times at sea.

These cruises don’t go particularly far – a three-night sailing from Miami will only get you to the Bahamas, not the Caribbean – but short cruises are a pleasant break from reality, with relaxing time on board plus access to sand and surf.

While short cruises are an attractive option for travelers short on time and money, these cruises are not for everyone. Here are some things to consider to determine whether a short cruise itinerary is right for you.

Cruise companies such as Carnival Cruise Line and Royal Caribbean tend not to put their latest and greatest ships on short cruise routes. If you want to try the racetrack on top of the newest Norwegian Cruise Line ships, for instance, you’ll have to book a full one-week cruise. The same goes if you have your heart set on riding the first rollercoaster at sea aboard Carnival’s new 5,282-passenger Mardi Gras, or the thrill slides on Royal Caribbean’s Oasis Class ships.

Exceptions to the older ship/short route tradition include Virgin Voyages, which recently launched its sexy, adults-only 2,770-passenger Scarlet Lady on four- and five-night cruises from Miami. When Disney Cruise Line introduces the 4,000-passenger Disney Wish in summer 2022 — the line’s first new ship in 10 years — it will be on three- and four-night cruises from Port Canaveral, near Orlando.

You may also find a ship that has been recently rehabbed, such as the 2,984-passenger Carnival Radiance (formerly Carnival Victory). Radiance originally launched in 1998 but underwent a $200 million makeover in 2021, including new restaurants, bars and a waterpark. It sails short cruises from Long Beach, California.

Even if a ship has not received a recent makeover, it will give you an idea of how the cruise line operates in terms of food, service and entertainment – which is great for those who want to try a brand they have not yet experienced. Plus, older cruise ships tend to be smaller, so you won’t suffer from perpetual FOMO when you don’t have enough time to try every onboard activity and restaurant.

You’re cruising on a budget

Short cruises can be an excellent budget getaway option. On any given week, cruise lines need twice as many people to fill a ship sailing a three-night itinerary followed by a four-night cruise than it does to fill a ship for one seven-night cruise. That is why you will see more discount offers for short cruises.

If you don’t mind staying in snug quarters without a view, you may be able to snag a fare for less than $50 per person, per night. Since your cruise fare covers accommodations, food, nightlife and activities, your getaway at sea could be cheaper than a night on the town in New York or Miami.

Keep your eye out for price reductions. The best cruise deals for short cruises tend to be in late September and from before or after Thanksgiving, Christmas and New Year’s into the early winter.

The cheapest way to go is to cram four friends or family members into one inside cabin.

A short cruise may also be your opportunity to book a fancy cruise ship suite and sample the high-life without paying a fortune.

You’re not picky about your cruise destination

If your vision is focused on sitting under a palm tree with a rum drink in hand, you may care less about where your ship is going. Still, be aware that short cruises don’t tend to cover a lot of ground geographically. The most common destination is the Bahamas, with a stop in Nassau and a visit to Key West or to the white sand beaches of a private island owned by the cruise line – such as Disney Cruise Line’s Castaway Cay or Royal Caribbean’s Perfect Day at CocoCay.

On a five-night cruise from a Florida port, you might visit Cozumel and other ports in Mexico or Grand Turk and the Dominican Republic. You won’t hit St. Thomas and St. Maarten, popular stops on one-week sailings.

If you’re cruising from a California port, your three-night cruise destination will be Ensenada, Mexico, while Catalina Island may be included on four-night sailings. Five-night cruises will get you to Cabo San Lucas.

Consider also short cruises to destinations that include either Bermuda or New England and Canada (up to Halifax) that leave from New York, as well as on cruises along the Pacific Coast between California and Vancouver, British Columbia.

You enjoy a party scene

Short cruises tend to attract groups of friends, solo travelers and lively couples of all ages looking to make the most of their time at sea with lots of late-night action. These are not necessarily quiet ship experiences.

The fact that you don’t have to pay a bundle for a drinks package (since the packages are priced by the day) adds to a party-hearty atmosphere. While not all cruisers will drink dawn to dusk, you can be sure that some will.

Even if you’re not planning to stay up until the sun comes up, short cruises can have a livelier onboard atmosphere as passengers pack in as much fun as they can in a few days rather than pacing themselves. You won’t be disappointed by a sleepy bar scene or empty nightclub on these sailings.

Short cruises work well for cash-strapped millennials or college students on break. If you’re in your 20s and 30s and worried about cruising with retirees, you can rest assured that you will be likely to run into people your age on these sailings. Short cruises between February and April are especially popular with the college spring break crowd.

You don’t mind traveling with kids

Short cruises are also popular with families, including multigenerational groups. If you travel in summer or during a holiday period, expect lots of children on board.

Parents like these affordable cruises, particularly the long weekend getaways, because they don’t have to feel guilty pulling their kids out of school for more than a day or two. Age-specific kids and teens programs keep the young ones occupied while the adults hit the spa or casino or otherwise engage in grownup activities.

Tip: If you just can’t stand being around kids on vacation, book your short cruise right after kids go back to school in September.

You want to combine your cruise with a land vacation

For some travelers, a big bonus of a short cruise is that it can easily be combined with a hotel stay for a land and sea vacation. For instance, you could spend a week with Mickey Mouse by combining a three-night Disney cruise from Port Canaveral with a few days at a Walt Disney World Resort.

Alternatively, you could explore New York City then hop on a short cruise to Bermuda, or take a quick cruise to Mexico then spend a few nights in L.A. In Europe, Celestyal Cruises has three- and four-night itineraries that you can easily combine with mainland exploration in Greece.

They are less common on fancier cruise lines. Luxury line SeaDream Yacht Club, for instance, sails only a few five-night cruises on its 112-passenger ships in Europe and the Caribbean, and The Ritz-Carlton Yacht Collection will launch its 298-passenger Evrima in 2022 with some five-night Europe sailings on its roster.

Adventure seekers have limited choices in short cruise itineraries, too. One option is Lindblad Expeditions’ five-night cruises to the Sea of Cortez from Baja, Mexico.

Short cruises are an affordable way to take a break from your daily routine, but they’re not for everyone. Before you book a three- to five-night cruise, make sure the ship and onboard ambiance fit with your travel style. If not, consider saving up vacation time and money to take a longer cruise you will truly enjoy.

Featured image by Michel Verdure/Norwegian Cruise Line
Editorial disclaimer: Opinions expressed here are the author’s alone, not those of any bank, credit card issuer, airline or hotel chain, and have not been reviewed, approved or otherwise endorsed by any of these entities.