Do you need a passport for a cruise?

Articles
Gwen Pratesi is a Florida-based freelance travel writer and a James Beard Award Finalist in Journalism. She contributes to The Points Guy and many other outlets while traveling the world and cruising the high seas.
Follow
April 01, 2022
•
8 min read 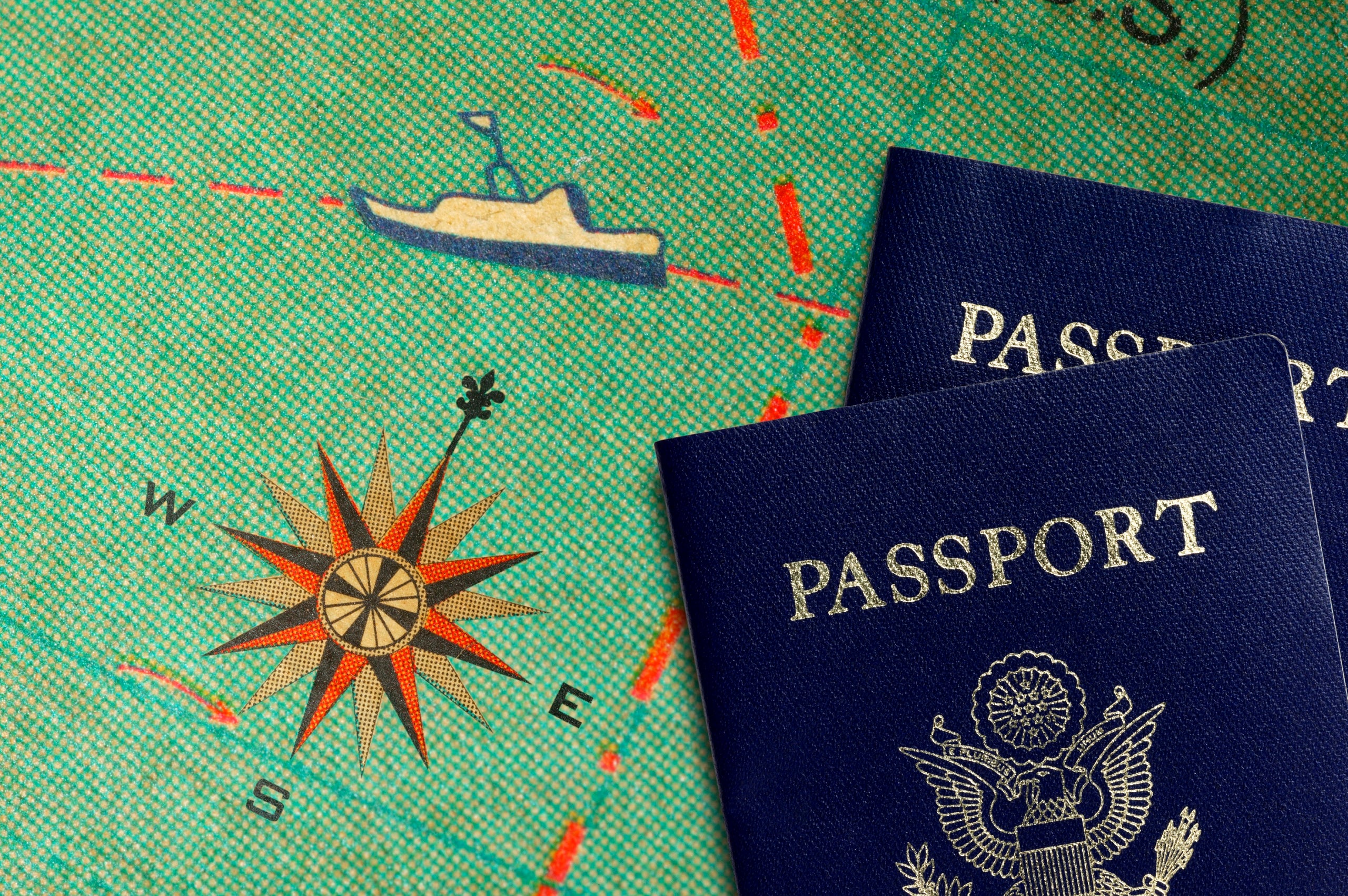 Do you need a passport for a cruise? The answer is both yes and no.

Whether you need a passport depends on numerous factors, including where you embark and disembark the ship, where you're sailing to and which line you're cruising with. There's no definitive answer -- and it can be confusing.

If you’re planning a cruise and have questions about where you can travel without a passport, here’s everything you need to know before you go.

Where can I cruise without a passport?

If you’re a U.S. citizen and don’t have a passport, you actually have quite a few cruise options.

You may be surprised to learn that U.S. citizens don't need a passport to sail on "closed-loop" cruises with lines like Celebrity Cruises, Norwegian Cruise Line, Carnival Cruise Line, Princess Cruises and others.

These voyages sail round trip from U.S. ports to destinations in North America such as the Caribbean, Bahamas, Bermuda, Mexico, Central America, Alaska and Hawaii. They depart from such home ports as Miami, Seattle, Los Angeles, Galveston, Texas and New York City.

Related: Eastern vs. Western Caribbean cruises: Which itinerary will I like more?

The rules also apply to Caribbean islands that are U.S. territories. For instance, you won’t need a passport to fly to and cruise out of San Juan, Puerto Rico, or St. Thomas in the U.S. Virgin Islands.

However, if you embark in one U.S. port and disembark in another, it's not the same as a closed-loop sailing. For example, a Panama Canal cruise that begins in Miami and ends in San Diego will require a passport. Longer cruises, like grand voyages, that sail round trip from the U.S. but visit countries outside North and Central America, will also require a passport.

Any cruises where you need to fly to or from a foreign country, including Canada, will necessitate a passport.

Are there exceptions for needing a passport on a closed-loop cruise?

Yes. Even if you're on a closed-loop sailing, certain islands in the Caribbean – Guadeloupe, Martinique, St. Barts, Barbados and others -- require a passport for entry. It’s your responsibility (not your cruise line’s) to learn the requirements of each of the destinations you're visiting before you go.

If you don't have a passport and your ship stops at one of these islands, you'll have to stay on board. If you want to cruise without a passport, choose itineraries where you know you can get off the ship and enjoy your day in port.

To make things even more confusing, you can get off the ship in port in Vancouver, British Columbia during an Alaska cruise without a passport, but to cross over into the Canadian province by rail, you'll need one. You can visit Alaska on a round-trip Seattle cruise without a passport. But if you wish to book a rail journey excursion on the White Pass & Yukon Route, which takes you from Alaska into Canada, choose the shorter White Pass Summit tour; you’ll need a passport for the longer trips.

There are also exceptions when you're traveling with children. Princess Cruises and Holland America require that at least one parent carry a passport, even if you're on a closed-loop sailing. Some lines always require a passport for all travelers, no matter the itinerary, including Regent Seven Seas Cruises, Azamara, Windstar Cruises, Silversea Cruises, Oceania Cruises and Seabourn.

What type of ID do you need to carry for a closed-loop cruise if you don't have a passport?

The U.S. Customs & Border Protection agency states that if you're cruising without a passport, you'll need proof of identity and U.S. citizenship in the form of a state-issued birth certificate. It also requires a government-issued driver's license or a photo ID with your name and date of birth.

Another option is a passport card, which is a photo ID issued by the government that proves your citizenship and permits border crossings by land and sea from Canada, Mexico, the Caribbean and Bermuda. (This card cannot be used for international air travel and therefore costs less than the traditional passport book.)

An enhanced driver's license is another alternative that you can use for land and sea port crossings, but not for international flights.

If you don't have a passport, these documents may also be sufficient to show customs officials in some Caribbean islands. For example, if you disembark in St. Maarten (on the Dutch side) and then take a boat over to Anguilla on an excursion, you will need a passport, a certified birth certificate and photo ID, a passport card or an enhanced driver's license. St. Maarten doesn’t require the documents, but Anguilla does.

It's best to check the requirements not just for each island that you'll be sailing to, but also to additional destinations you may visit on a port call. They may require different documentation for entry.

If you are cruising with kids under age 16 on a closed-loop cruise, you'll need to bring a certified copy of their original birth certificate for identification. They do not need a photo ID.

No matter which documents you bring, it’s a smart idea to take copies of them (either paper ones or photos on your phone) when you leave the ship, in case something happens while you’re ashore. Always carry some type of photo identification, like a driver’s license, when you head into port.

What happens in case of an emergency if I don’t have a passport?

If you had an emergency and were forced to disembark due to illness or other reason in the Caribbean, Mexico, Central America, the Bahamas, Bermuda or Canada you would need a passport to return home by plane. On the rare occasion of a ship evacuation or a diversion to another country to disembark, a passport would also be essential for getting home.

Related: 7 ways to prepare for any kind of travel disaster

If you find yourself without a passport but in need of one, you would need to contact and locate the nearest U.S. embassy or consulate and request an emergency limited validity passport in order to fly home. The process requires explaining your urgent situation, completing an application, and showing your travel documents, photo identification and proof of citizenship.

You will also need to have a passport size photo taken and pay the required fees. While this type of passport can be issued within as little as a day, it could take up to a week to receive it.

Cruise lines recommend that every passenger have a passport when traveling, even on closed-loop cruises when one isn’t strictly necessary. It's the best way to prove your identification and citizenship and is an essential item if you unexpectedly get stranded abroad. It's also less cumbersome than carrying the required documents and papers with you wherever you go.

There's no better time to apply for a passport than now. It can take eight to 11 weeks (expedited wait times are five to seven weeks) for a routine passport to be issued, so you always want to plan ahead.

The cost for a first-time passport holder is $165, plus the photo fee; the steep fee alone is why many Americans choose to go without one. The good news is that an adult passport is valid for 10 years – and you can travel to most places in the world with just a passport and no visa.

While it is possible to cruise without a passport, it's worth the peace of mind to know that you can get off the ship and do what you want to do while on vacation and then be able to get home again should anything unexpected happen. However, if you don’t have a passport, or don’t wish to get one, you can still cruise — you’re just limited to North American cruises sailing round trip from U.S. departure ports.