A quiet day at the beach: Why I enjoyed my visit to Ocean Cay, the new MSC Cruises private island in the Bahamas 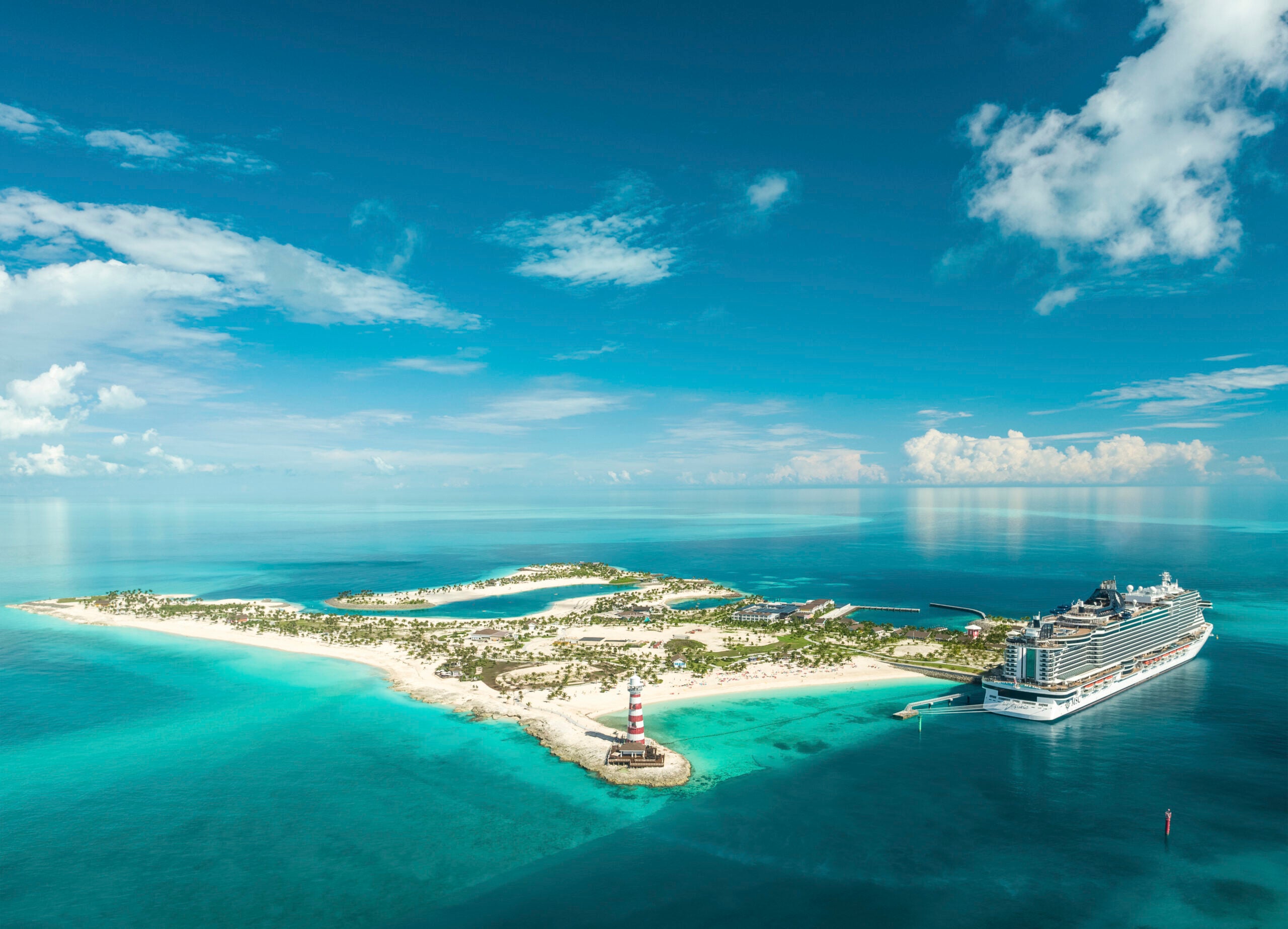 Editor’s note: MSC Cruises provided TPG complimentary access to MSC Seashore during a two-night, nonrevenue media preview event. The opinions expressed below are entirely from the author and weren’t subject to review by MSC Cruises or any external entity.

Looking down at Ocean Cay, MSC Cruises' 95-acre private island in the Bahamas, I was initially underwhelmed.

From my vantage point on MSC Seashore — the new MSC Cruises ship based at PortMiami — the beachy area looked a bit ... sparse.

Unlike some other cruise line private islands in the Bahamas, the new MSC Cruises getaway just 65 miles east of Miami wasn't covered with waterslides, zip lines, splash areas for kids and all manner of family-friendly attractions.

In general, it appeared much less developed with activities and amusements than is the norm at such iconic cruise line island escapes as Royal Caribbean's Perfect Day at CocoCay and Norwegian Cruise Line's Great Stirrup Cay.

But, as I slowly realized over the next few hours while wandering among Ocean Cay's eight sandy beach areas, that's sort of the point.

Ocean Cay is a private island for cruisers who want a true "get away from it all" beach experience.

It's a place that you go specifically because it's not designed as a theme park.

As top executives at MSC Cruises like to say, if you want a theme park experience, you can get that back on the MSC Cruises ships that dock at the island. MSC Cruises vessels typically are topped with multiple pool zones, kiddie play areas, giant waterslides and other amusements.

At the core of Ocean Cay are eight spread-out beaches lined with lounge chairs and sprinkled with a smattering of beach bars and food-truck-like food outlets.

Other than that (and an off-limits-to-visitors housing area for island workers), there aren't a lot of structures on the island.

This is an island that's all about lounging along a crescent of warm white sand and gazing out at -- or immersing yourself in -- the surrounding tranquil, turquoise waters.

MSC Cruises has purposely kept the activities available to visitors to the island low key, and they pretty much all revolve around getting near, in or on this water, which is pristine.

Snorkeling just off the beach with colorful reef fish is one of the big activities at Ocean Cay, as is paddleboarding and kayaking around the island's perimeter. Visitors can book jet ski tours and outings on the island's catamaran cruiser.

If, like me, your idea of a perfect beach day is to do nothing more than read a few chapters of a good book while kicking back on a lounge chair near the water, you'll find everything you need at Ocean Cay. If you like snorkeling or paddleboarding in crystal clear water, all the better.

If you're looking for a cruise line version of the Atlantis beach resort on Paradise Island in the Bahamas, with all its watery attractions, you're out of luck.

The day I visited Ocean Cay was, unfortunately, a lousy beach day. The weather was uncharacteristically gloomy, with cloudy skies, wind, waves and an occasional drizzle. But I still enjoyed relaxing on a lounge chair, and even dozing off for a bit, before grabbing a burger at the centrally located Seakers eatery.

I could tell that I'd enjoy being back on a sunnier and calmer day.

That I was able to lounge at all at Ocean Cay last week is sort of remarkable. Just a few years ago, Ocean Cay was an industrial wasteland -- a former sand extraction site that was littered with the rusting detritus of industry. The coral reefs surrounding the island had been damaged, and the island itself no longer looked particularly pretty.

But the island had one thing that was appealing to the executives in charge at MSC Cruises: A shipping channel that had been dredged through the shallow, coral-lined waters around the island. The channel would allow a big cruise ship to dock right up against the island's shores.

Seeing the potential, MSC Cruises undertook a multiyear (and truly extraordinary) project to clean up and restore the island and its surrounding waters and coral areas to make it a retreat worthy of the cruising crowd.

In all, the line removed 1,510 tons of scrap metal from the island and surrounding sea bed. It also created a coral nursery on the east side of the island, with a focus on propagating endangered coral types that are native to the area. The line’s long-term vision is for the island to become a base for marine biologists to conduct research into coral restoration.

The official name of Ocean Cay — Ocean Cay MSC Marine Reserve — hints at the line's focus on turning the island into a showplace for environmental restoration. MSC Cruises and the government of the Bahamas have committed to protecting 64 square miles of waters around Ocean Cay as an official Bahamian marine reserve where human activity is restricted.

Before the line began work on the island, it was almost completely stripped of vegetation. As part of its restoration, MSC Cruises has planted 75,000 plants and shrubs as well as 4,600 trees.

One reason that the island seemed a little sparse to me is that this vegetation is only now beginning to grow in earnest. It'll likely take several years before Ocean Cay has the lush feel of some other private islands in the Bahamas.

If you haven’t heard all that much about Ocean Cay, it’s because it was only open briefly early in 2020 before the coronavirus pandemic caused the cruise industry to shut down. A grand opening celebration set for May 2020 was canceled on short notice, and the island didn't see any ships for more than a year. It's only now ramping up as a destination.

In addition to MSC Seashore, which just began regular sailings to Ocean Cay out of Miami this week, the island will be visited regularly over the coming year by the line's MSC Meraviglia and MSC Divina.

A private pier and late-night stays

One thing that sets Ocean Cay apart from many other private islands visited by cruise ships is that it has its own pier. That makes it easy for passengers to go back and forth between their ship and the island during visits. There’s no need to “tender” to shore on a small boat.

Other private islands that have their own piers include Disney Cruise Line's Castaway Cay and Royal Caribbean's Perfect Day at CocoCay.

In another notable difference to other private islands, MSC Cruises plans to have its ships stay late into the night — and in many instances overnight — at Ocean Cay, allowing for evening activities. That’s unusual for private island calls.

The longer stays are made possible, in part, by Ocean Cay's close proximity to Miami -- MSC Cruises' main hub for cruises to the Bahamas and Caribbean. As was the case during our stop at Ocean Cay, ships can stay at the island late into the night on the final day of a cruise and still get back to Miami by dawn the next morning for passenger disembarkation.

Evening activities at Ocean Cay include beach-side stargazing, nighttime paddleboarding on glowing paddleboards and sunset beach picnics. After dark, a light show plays across the island’s iconic red-and-white lighthouse, and an evening junkanoo parade brings the party from the welcome area down to the beach.

Ocean Cay is a bit different than other private islands operated by cruise lines. It doesn't have lots of family-friendly adventure areas such as kiddie splash zones and waterslides. There are no faux pirate ships or zip lines to keep your children amused.

But that's by design. Ocean Cay is a private island that has at its core a classic beach experience that revolves around lounging along a sandy beach and enjoying the crystal-clear waters.

Featured image by Conrad Schutt
Editorial disclaimer: Opinions expressed here are the author’s alone, not those of any bank, credit card issuer, airline or hotel chain, and have not been reviewed, approved or otherwise endorsed by any of these entities.