How to Have a Perfect Long Weekend in Ojai, California 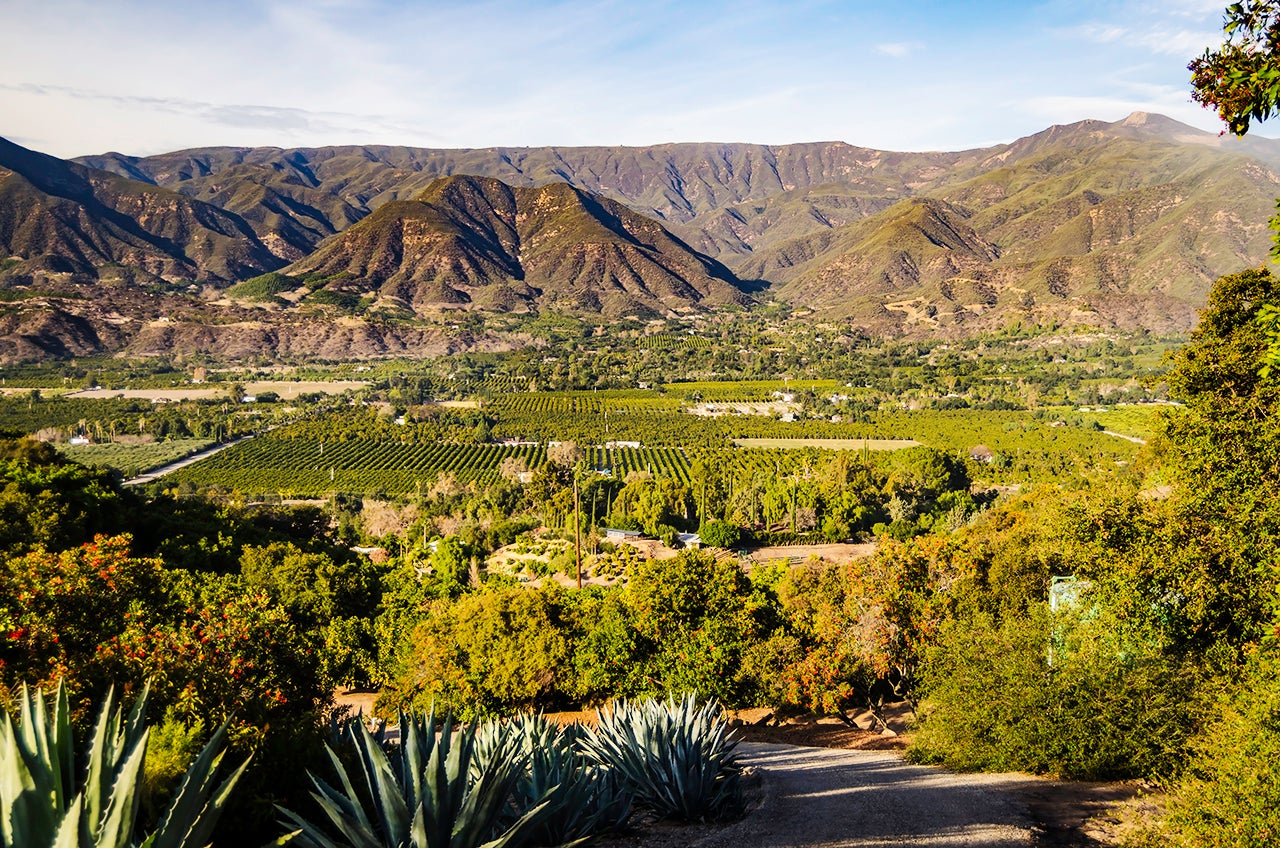 In sunny southern California, there are plenty of opportunities to get off the grid. Think: Joshua Tree, Palm Desert, or Anza-Borrego Desert State Park. And up in the mountains, you can find blissful seclusion — not to mention great skiing — in bucolic towns. But stumbling upon a tiny, cosmopolitan and decidedly spiritual town in a lush valley studded with fragrant orange groves, just two hours from LAX? Well, that’s not something you can find just anywhere.

Ojai, which means ‘nest’ in the native Chumash language, is a stone’s throw from Santa Barbara and Los Angeles. From first time visitors, it tends to elicit little gasps of delight. Fifteen miles in from the coast, peaceful Ojai feels far removed from the noise of city life and congested freeways. It’s also visually stunning, encircled by rippling mountains where the sun casts a pink shadow when it sets

The town moves at a divinely unhurried pace, which is probably why stressed-out Angelenos — and Hollywood stars — have been coming here since the 1930s. But mind you, it’s no ghost town. A string of charming wine tasting rooms, art galleries and cozy B&Bs line Ojai Avenue. And the community-led Ojai Valley Land Conservancy works hard to maintain the town’s reputation as a haven free from shopping malls and large commercial developments.

Whether it’s an unplugged nature retreat or an indulgent weekend of dining and spa treatments you’re after, don't miss your next chance to take the two-hour drive up from Los Angeles to Ojai.

The folks at Ojai Valley Brewery have a close relationship to their surroundings. In addition to proudly bearing the Ojai name in their logo, the two-year-old brewery sources naturally occurring ingredients (wild sumac, wild sage, prickly pear and hibiscus), found in the Ojai Valley. In this way, the 15 ales and lagers it produces are unlike any other you’ll try during your time in California. In particular demand is the White Pixie, a white ale brewed with the zest and blossoms from pixie tangerines, a tiny, super-sweet and seedless tangerine that’s native to the area.

If you’re in the mood for a tasting, the brewery has a taproom inside Azu Restaurant & Bar. Here, in the restaurant’s back patio, you can sample various beers on draught, like the Dubbel Date (fermented with actual dates) and the pink peppercorn-infused Etchart Gold, alongside dishes such as chorizo-stuffed, bacon-wrapped dates, honey baked brie and chili-braised short rib. Like what you taste? The brewery recently started bottling a few of its top sellers, so you can bring some of the action home.

Show up for pixie season

With its temperate Mediterranean climate, Ojai enjoys a bounty of olives, walnuts, lemons, apricots and kale, all grown at farms within a 15-mile radius of town. The fresh produce is on display year-round at local restaurants including The Nest, Farmer & Cook and Azu Restaurant & Bar. But there’s one crop that requires extra planning to enjoy.

From late March through early May, the coveted pixies make their annual appearance. Huge excitement surrounds the harvest, and if you’re in town, you’ll witness the beloved citrus pop up on menus and market stands all across Ojai as the city dissolves into full-on pixie madness. (It may be too late for this summer's yield, but keep it in mind for next year.)

Slightly north of downtown, Tipple & Ramble pairs an upside-down cornmeal pixie orange cake with a drink called the Rosemary Fizz — a blend of fresh-squeezed pixie juice, rosemary syrup, prosecco and a splash of Aperol. Need a hit of pixie first thing when you wake up? One local B&B owner bakes fresh loaves of lavender pixie sweet bread for guests’ breakfast. There’s even pixie kombucha on tap at a local kombucha tasting room.

We all know where honey comes from, but if you’ve ever wanted a close-up look at a working hive — complete with a hands-on demonstration by an actual beekeeper — book the 90-minute beekeeping tour at Ojai Valley Inn. Set on the resort’s beautiful 220-acre grounds, participants are escorted down to the southeast corner of the property, where everyone puts on a full bee suit, complete with gloves, hat and face screen.

After wafting a bowl of burning sage around the hive (this calms the bees), the beekeeper carefully removes a panel from the hive to reveal an entire colony of European honeybees in their natural working environment. Not to worry: the demonstration is relaxed, and totally safe. The beekeeper will share interesting trivia about bees (did you know the queen mates in mid-air? Or that a single bee produces only 1/12 of a teaspoon of honey in its lifetime?). It’s the kind of science class you wish you’d had as a kid.

Ventura County is known for its honey, so it’s only natural that the tour ends with a guided tasting of twelve honeys from around the region. Ranging from ultra-sweet eucalyptus to molasses-like pine and rich avocado, the flavors are all distinct, and show that honey — like wine — is hugely influenced by the environment.

Hop on a bike

If you need your culture fix, Ojai hosts several high-caliber events throughout the summer, including the Ojai Music Festival in June and the Ojai Playwrights Conference in August. When it comes to attractions, however, nature is Ojai's star. Local bike store The Mob Shop offers a range of bike tours for all skill levels that help travelers explore Ojai’s stunning country roads and peaceful neighborhoods at a leisurely pace.

On a typical two-hour “Experience Ojai” ride, you’ll head east out of town and up to the citrus orchards where you’ll go whizzing past hundreds of colorful orange and tangelo trees. Depending on what time of year you visit, the guide will even let the group pause for a quick snack break. Just be sure to bring extra napkins (those suckers are juicy).

If you’re feeling extra adventurous, sign out a bike for the day, and head down to the Ojai Valley Trail. This well-marked, paved pathway follows Highway 33 all the way south to Ventura (about nine miles). It's not only an incredibly scenic route to the ocean — it’s easy, too. Whether you’re a practiced mountain biker or a novice, it’s a great way to spend an afternoon in Ojai.

From Los Angeles (LAX), follow the 101 all the way to the coast, and from there, swing onto Highway 33, which takes you right into Ojai. The town of Ojai sits inside a valley, which heightens the feel of “getting away.” And because all of the surroundings are national parkland, rolling hills and mountains, the drive is incredibly scenic.

If rustic mountain cabins with knotty pine walls and crooked timber bed frames sound up your alley, consider a stay at the Ojai Rancho Inn. The 18-room retro motel perfectly suits the laid-back, hippie, communal vibe of Ojai. And though the rooms are on the basic side, the amenities (fireplaces; a sauna) stand up — there’s even a fire pit out back where guests like to drink wine, play bocci and splash around in the pool. The magnetic aura around the property is entirely owed to Shelter Social Club, which has a reputation for opening bite-size, vibrant hotels in SoCal hot spots like Santa Barbara and Solvang. At the center of the lot is Chief’s Peak, a minuscule bar with a fantastic oyster happy hour (Fridays) and a collection of crystals on the mantel that will blow your mind.

On the upscale end of the spectrum is Ojai Valley Inn, a sprawling mountain resort with a quartet of outdoor pools, tennis courts, verdant fairways and more than 300 contemporary guest rooms.

Related stories
Bask Bank raises the mileage earning rate on its AAdvantage savings account — what you need to know
Targeted Premier 1K members eligible for bonus miles when checking in and checking a bag on the United app
Current airline elite status match and challenge options you should know about
Business-class deals are back: This month’s Flying Blue promo awards
Featured image by Getty Images/iStockphoto