Inspired by Shark Week? Sink Your Teeth Into These Tips for Seeing Great White Sharks 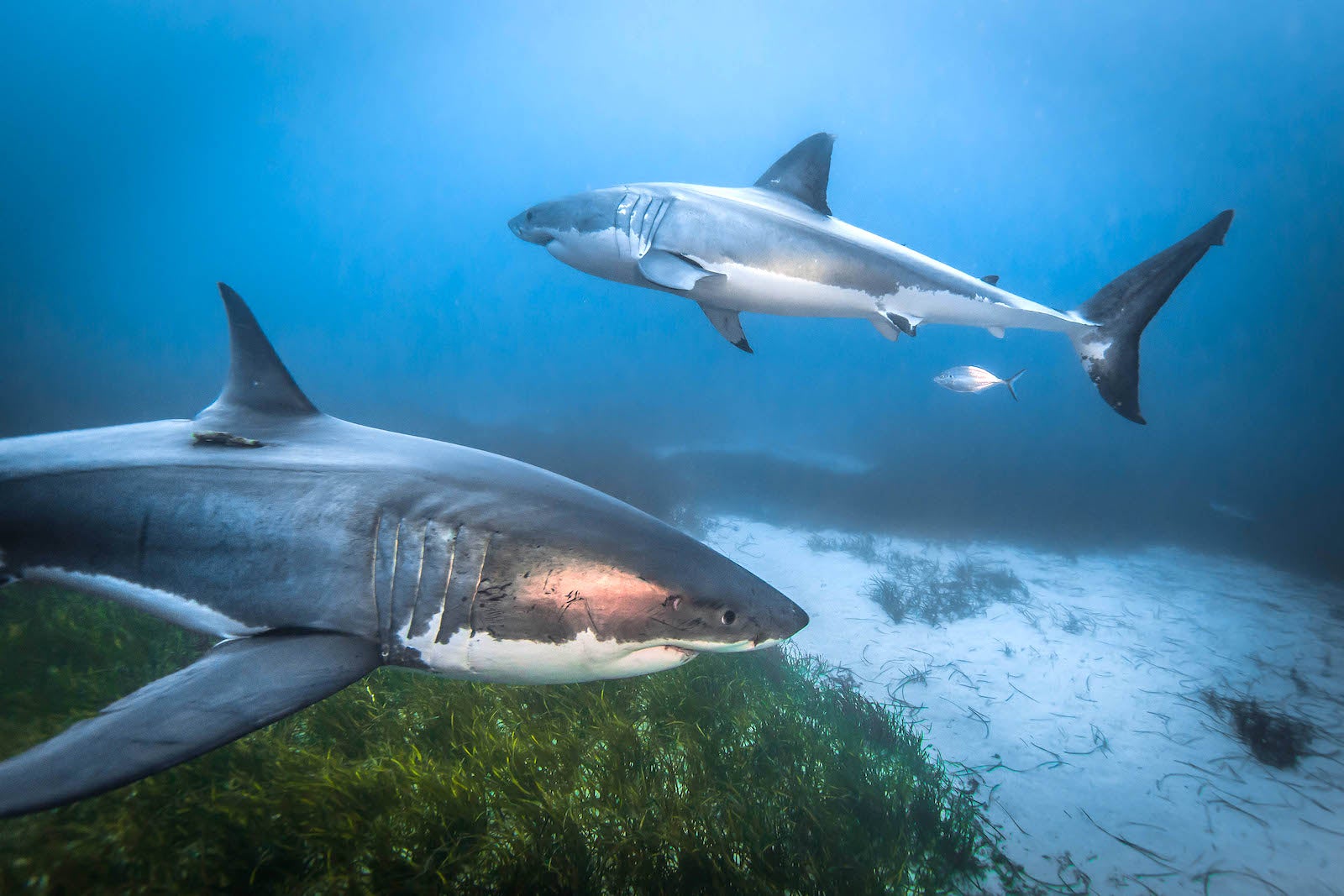 From "Jaws" to the annual late summer tradition of watching Shark Week, Great White sharks have always captivated, impressed and enthralled us. And with good reason: they’re the ocean’s apex predators, the largest carnivorous fish in the world. The average white shark is 15 feet long — that’s a third of the length of a yellow school bus — but they can grow much bigger. Deep Blue, who made headlines in Hawaii earlier this year, measures a whopping 20 feet and weighs more than 5,000 pounds!

Yet despite our fascination with these awe-inspiring animals, we actually know very little about them. We know they migrate across huge distances: one Great White was tracked from South Africa to Australia and back again in less than nine months. These nomadic habits make it difficult to estimate population numbers, but we do know that as a species they are declining, and that human activities — such as fishing and degrading their habitats — are the main threats to their survival.

This raises an important question: is it ethical to cage dive with white sharks? Some people are concerned that luring sharks toward diving boats may have harmful consequences, from wasted energy to possibly altering their behavior. In New Zealand, the activity has been banned completely. But many experts believe that responsible, regulated ecotourism is beneficial to this vulnerable species. It raises public awareness about their conservation and makes them more valuable alive than dead, which encourages authorities to take steps and protect them.

If you are planning to dive with these impressive creatures, choose a tour operator that follows local guidelines, has a strong educational component and actively engages in conservation work (for instance, by conducting research on its trips). You can research operators online or search for a recommendation on PADI Travel. On the tour itself, you can lessen your environmental impact by wearing nontoxic or “reef safe” sunscreen, avoiding single-use plastic bottles and following the old “leave nothing behind but bubbles” rule.

Ready to go searching for sharks? Here’s where you're likely to find them.

Not too far from where "Jaws" was filmed, the Neptune Islands boast plenty of sharks plus excellent underwater visibility (32 to 65 feet). You can spot them on a day trip with Adventure Bay Charters or Calypso Star Charters or, for a more serious voyage, try an overnight or multiday tour with Rodney Fox Shark Expeditions. Fox invented cage diving back in the 1960s after the idea occurred to him at the zoo, and this company allows scuba-certified divers to cage dive on the ocean floor. (Most cage diving takes place at the surface and doesn’t require any prior diving experience). The Neptunes are a three-hour boat ride from the town of Port Lincoln and trips run year-round. Shark viewings are likely any time of year — one operator reports an 85% success rate — but for the best odds try to visit from April to June or November to January.

TPG Tip: To see these sharks up close, you'll want to first fly into Adelaide (ADL), the closest major airport to Port Lincoln. Fortunately, there are plenty of great ways to use your points and miles to book a flight to the Land Down Under.

Just two hours by boat from San Francisco, the waters surrounding these rocky islands are the territory of several hundred mature Great Whites. They come to feed and possibly mate from mid-September through late November, which unfortunately is not an optimal season for diving as the water is cold and murky. And because the Farallons are part of a marine sanctuary that forbids the use of bait or decoys to attract sharks, getting close enough to catch a glimpse requires a lot of good fortune. One operator describes your chances of seeing a shark as 50/50, but the payoff is that the Farallons are known for large sharks averaging 15 to 18 feet, which is around the length of a passenger van. If you’d like to try your luck, book a one day trip through Great White Adventures or Incredible Adventures, both based in the Bay Area.

TPG Tip: To see Great Whites around the Farallons, you'll want to fly into San Francisco International (SFO). All of the major US airlines fly here, including Delta, United, American and Southwest. Here are some hotel ideas if you do make the trip.

The frigid waters south of Cape Town boast the highest concentration of Great Whites in the world, which is why the BBC filmed the white shark segment for its "Planet Earth" series here. There’s a decent chance you’ll see some Shark Week-style activity like hunting or breaching as the sharks launch surprise attacks on their prey from below.

False Bay is a 45-minute drive from Cape Town while Gansbaai (pronounced chuns-bye with a “ch” like “chutzpah”) is two hours away. From there, it’s less than half an hour by boat to either Seal Island or Dyer Island: also known as Shark Alley. It's where all the action goes down. Trips run year-round in Gansbaai and from April to September in False Bay with peak season being June and July. Before you book, ask which area has had more recent sightings and check the weather conditions, as visibility can vary from 15 to 65 feet. Apex Shark Expeditions runs trips in both locations and has hosted a number of documentary film crews. Gansbaai-based Marine Dynamics Shark Tours has marine biologists leading each trip and boasts stellar conservation credentials.

TPG Tip: While United will be launching seasonal nonstop flights from Newark (EWR) to Cape Town (CPT) starting in December, you have other options if you're looking to head there sooner rather than later. For example, you can book one-way business class seats on Cathay Pacific by booking through Alaska Airlines.

An adventure for true shark enthusiasts, this remote volcanic island is around 150 miles off the coast of Baja California, and is only accessible on a five- to six-day liveaboard trip. The island is located off the coast of Baja California, and is one of the most challenging places to get to on Earth. Most operators offer three full days of diving with multiple dives per day, so you’ll be spending lots of time in the water which is, incidentally, the warmest and clearest of all the spots on this list. With visibility regularly exceeding 100 feet and 170 to 180 known individual sharks patrolling the area, an underwater selfie with a Great White is virtually guaranteed here.

Tours depart August to October from either San Diego, California or Ensenada, Mexico and the vessels range from simple to luxurious. If you’re looking for lavish staterooms and gourmet food, try the Somar V, or one of the Nautilus Liveaboards which sail from San Diego. Mexico-based Club Cantamar offers more affordable expeditions, as does the MV Horizon, which has been running Guadalupe shark tours for almost 20 years. Before you book, remember that this is an underwater safari, and like any wildlife-viewing activity, sightings can never be guaranteed. You’ll likely see plenty of other marine life, such as seals and sea lions, dolphins and maybe even whales. But hopefully you’ll have the rare privilege of observing a magnificent Great White shark in its natural habitat. And isn’t that an experience worth chasing?

TPG Tip: If you start your journey out of San Diego, consider booking a room at either the InterContinental San Diego or the Andaz San Diego — and take a look at the Cross Border Xpress that connects the Tijuana International Airport (TIJ) to San Diego.