Travel Etiquette: How to Avoid the Chatty Cathy Seatmate

Articles
Katherine Fan is a former senior travel features reporter at The Points Guy who covered everything from personal finance to travel and aviation.
Aug. 12, 2018
•
6 min read 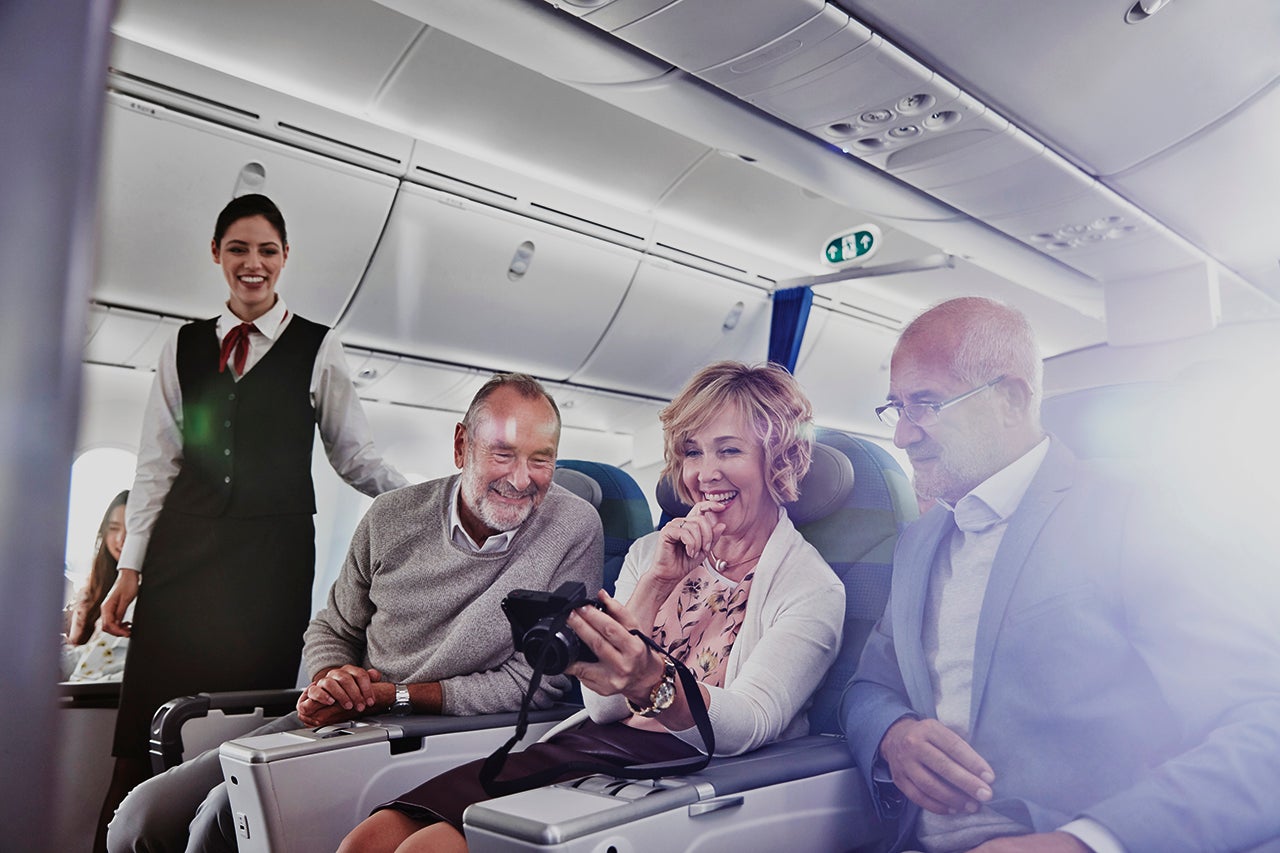 In recent years, our society has become obsessed with avoiding communication — especially while commuting.

Lyft is toying with the idea of a "Zen Mode" feature that would notify your driver if you're not interested in small talk. And the European long-distance ride-sharing service BlaBlaCar allows drivers to profile themselves based on their communication style: "Bla" for the laconic, "BlaBla" for social talkers, and "BlaBlaBla" for the especially chatty.

But on planes, travelers are not just stuck in their seats. They're often, many times, forced to fly alongside random seatmates. Social anxiety ramps up in situations like this, where people agonize over the best way to exit an uncomfortably personal conversation, or how to avoid seeing a proud grandma's photos of her little brood of descendants at Disneyland.

How can you politely communicate your wish for silence without being outright rude and creating tension for the remaining, say, nine hours of flight time? To help you confidently escape inflight small talk on your next flight, we spoke to TPG Lounge members, etiquette expert Diane Gottsman of The Protocol School of Texas and TPG's resident flight attendant, Carrie A. Trey, for expert guidance.

Use props to signal your preference for quiet

"Subtle signs like [putting] headphones on signal to other travelers that you are hoping to have some alone time," Diane Gottsman, frequent flyer and founder of The Protocol School of Texas, told TPG.

Nearly every reader in the TPG Lounge agreed that their "best defense is a strong offense" when it comes to handling Chatty Cathys. That means traveling with a pair of solid noise-canceling headphones A number of TPG Lounge members suggested boarding the flight with the headphones already on, to immediately indicate a disinterest in conversation.

The Points Guy himself opts for Bose QuietComfort 35 wireless headphones when traveling. He also tries to pick solo seats whenever possible (such as onboard the 767 from JFK to MIA) or to go to sleep right away if seatmates are inevitable.

In addition to sleep masks and sunglasses, or hiding inside the hood of a sweatshirt, which all signal your intentions for sleep or silence, some travelers are a bit more aggressive about fending off talkative travelers.

Some TPG Lounge members revealed that wearing surgical face masks can deter people from unnecessary interactions. "Maybe we should all whip out a surgical mask that says 'contagious,'" Auddie M. suggested.

Fred S., on the other hand, straight-up tells his seatmates, "My flu is almost gone; please excuse any coughing I may do during the flight."

Of course, like headphones, other "props" such as books, newspapers, laptops, iPads and phones all signal to fellow travelers that your inflight agenda does not include casual conversation.

"On short flights, I've gone so far as to pretend I don't know their language," Carrie A. Trey told TPG.

A handful of TPG Lounge members also reported using this tactic. "I turn to them and, in perfect English, say, 'I'm sorry, I don't speak English,'" Shawn P. said.

Frank I. said that a simple "no English" works wonders with Chatty Cathys. You can, of course, attempt this by substituting another language.

Other travelers pointedly turn toward the window and stare out at the view, using body language to demonstrate their disinterest in conversation.

For those who prefer more direct methods, you can always tell your seatmate upfront that you'd prefer not to chat.

"There are always the subtle signs such as putting headphones on, feigning sleep or reclining back in your seat [that] suggest to fellow passengers that you're not interested in conversation," Gottsman said. "But sometimes, you want to be left alone without having to go through all the motions or creating little white lies. In those situations, there's absolutely nothing wrong with speaking up."

Gottman suggests saying something polite but firm, such as "If you'll excuse me, I'm just going take this time to get some rest," with a pleasant, neutral demeanor and tone. "When you say it politely with the right tone of voice and a smile on your face, people understand. And you can certainly handle [the situation] wrong by being rude, but there's nothing wrong with just taking the time in a tiny little space [such as a plane] to be by oneself."

For fellow passengers who truly don't take the hint, Trey says it's perfectly fine to notify a flight attendant and ask for third-party intervention, or to discreetly ask for alternative seating. "If it's available, we usually try to accommodate our passengers as best as we can," Trey said. "Timing is everything — the sooner we know, the sooner we can do something about it."

But Trey also cautioned travelers against feeling entitled to the "right" to have an empty seat next to them on board. "Entitlement is the source of most conflict on planes," Trey said, explaining how travelers often get grumpy when they think they're seated in an open row until flight attendants move a former middle seat-traveler into the aisle seat.

"Lose that sense of entitlement," Trey said. "Unless you bought two seats, you should expect to be seated next to someone."

Trey also suggests adopting the "super unapproachable look," which combines all of the tactics mentioned above. "[Go] the whole nine yards — noise-canceling, over-the-ear headphones; sunglasses; fan open a large newspaper as a physical barrier. Pretend to be asleep."

How to avoid being a Chatty Cathy seatmate

In turn, what if you're the talkative one? Some gregarious extroverts truly don't mind speaking with fellow travelers; in fact, some thrive on it.

"It's all about reading body language and cues," Gottman said. "Just be aware and thoughtful of the other person's actions. If someone answers you in one-word sentences and doesn't ask follow-up questions, that's a pretty good sign they're not interested in talking — because when someone is interested and engaged, it's a two-way street. If they're not engaging back, they, for whatever reason, aren't interested in talking."

Gottman's final suggestion to travel extroverts? Don't hold back on potential friend-making opportunities ... but also, don't take it personally if other travelers opt for silence in the skies.

Related stories
20 must-have cruise items — including a roll of duct tape
Chase Sapphire Preferred vs. Chase Sapphire Reserve insurance benefits – Which is better?
The complete guide to the Expedia Rewards loyalty program
Not as simple as it seems: How to use JetBlue Travel Bank
Featured image by Getty Images/Caiaimage