What's the fastest way to O'Hare in Chicago? 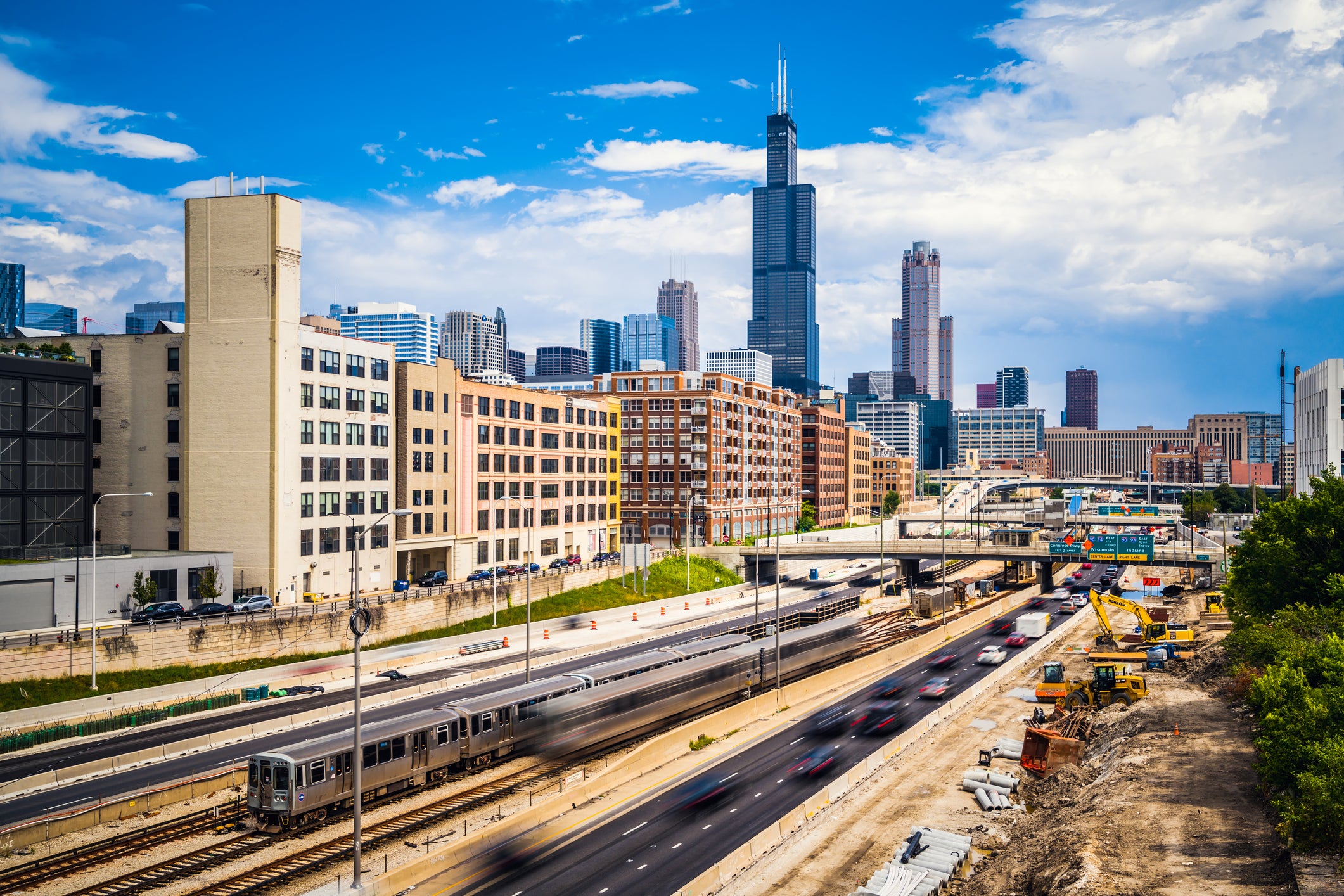 A bunch of TPGers were in Chicago on Sept. 17 for a training. In true TPG fashion, we decided to have a little fun on the way home and race to O'Hare International Airport from the training site on Michigan Avenue to see which mode of transportation might be the most efficient.

Unlike when traveling from Manhattan out to JFK, Chicago doesn't have a ton of options when it comes to getting to ORD (which is on the far Northwest Side of the city) from Michigan Avenue just east of the Loop, so we stuck to the three options that we figured people were most likely to rely on: cab, Uber and L (Chicago's subway/metro system for the uninitiated).

Our race started just after 4:01 p.m., the start of the evening rush hour.

L: Edward was confident that the L would be the clear winner in this race. His flight was leaving first, almost an hour before Zach's flight home, so the team agreed to meet in front of the United TSA PreCheck lane to give him a leg up in getting to the plane efficiently. He dashed off to the Clark/Lake Blue Line station as soon as we started our clocks.

Uber: Zach went to Northwestern University, so was familiar with Chicago rush-hour traffic. He also figured the L would win the race, but he had extra time to kill and wasn't too worried about getting to the airport on time either way. He offered to share the Uber with Sam Rosen, who was also at the training.

There was no helicopter option, like in TPG's race to JFK, so all the competitors were going to the airport via ground transit.

L: Edward had about a 10-minute walk to the L station, but once he was there, he was able to use his Chase Sapphire Reserve card via Apple Pay to cover his fare at the turnstile, and only had to wait about two minutes for a train to the airport. Blue Line trains typically run every four minutes during rush hour.

Uber: Zach authorized the charge on his Chase Sapphire Reserve. Almost immediately, his Uber app had a malfunction. It sent the car to the wrong side of Michigan Avenue. The mistake cost Zach and Sam a few minutes. They crossed the street with no issues, but the car — which actually was on the same side as they were to begin with — had to drive a few blocks out of the way to turn around. (Here are the best credit cards to use when riding with Uber.)

Taxi: Vikkie was the first person to actually get into her mode of transportation, so she was already on her way.

L: Edward had just left the Addison station, about half way to O'Hare. The L, which runs along the median of the interstate that connects Chicago to O'Hare, seemed to be making good time against the cars on the road.

Uber: Zach and Sam were sitting in traffic on the expressway. Edward was gleefully texting them updates from his L ride, which was going smoothly. Zach was exasperated that the Uber driver was sticking to the highway's local lanes, even though it looked like traffic was moving faster in the express lane.

Taxi: Vikkie also got snared in some serious traffic, and with a dying phone couldn't check on the status of the other racers. She stared out of the window and waited for time to pass.

Related: Beginner's guide to getting started with points and miles

L: Edward reported in a text that traffic on the highway looked like it was clearing up while his train was held at the Cumberland station. The race was tightening up.

Uber: Zach and Sam's Uber driver had pulled off the highway because his app said it would be faster to take local roads. Zach remembered some of the street names from his college days — there is no highway from Evanston to O'Hare — and he talked to the Uber driver about how people not from the area would probably be confused about getting off the highway.

Taxi: Vikkie was still on her way but wasn't sure how she was stacking up against the other racers.

Taxi: Vikkie was able to make up for the traffic with a smooth journey the rest of the ride. After paying for the cab with her Chase Sapphire Preferred Card to earn double points on travel, she hopped out and made her way to the TSA PreCheck line at 4:58 p.m. Would she be first, she thought? She looked around and didn't see her fellow racers. So she snapped a pic, took a seat and waited for the others to arrive.

L: Edward's train was held just outside the O'Hare station, but once he got off the L, it was a two-minute walk to Terminal 1 through an underground tunnel and then up to the ticketing level. He wound up getting to the PreCheck line just three minutes behind Vikkie, at 5:01 p.m., close, but ultimately not the clear winner that he (and the others) assumed he would be.

Uber: Zach and Sam were back on the highway around 4:50 p.m., and shortly later were pulling up to ORD Terminal 1. The app glitch at the beginning that sent the car around the block cost them dearly, though: They were the only racers whose total journey time took more than a full hour. They were the last ones to reach the PreCheck lane, one hour and three minutes after starting the clock, at 5:04 p.m.

Taxi: Having a taxi stand directly in front of you is a huge help. Even though there was traffic, being able to get on the move right away gave Vikkie an edge in this tight race.

L: The L may not always be the fastest way to the airport, but it's definitely the most dependable. The night before the training, Edward took the L from the airport, and his total journey time was around 55 minutes. His trip to the airport was only four minutes longer during rush hour, so he went two out of two in pretty consistent travel times.

Taxi: $65.97. It won the race, but only barely against the L. It would probably be faster outside of rush hour, and was kind of a coin flip against Uber based on where the closest taxi might be. Of course, it was also the most expensive of the three.

L: $2.50. Definitely the most value for the money. It was only slightly slower than a taxi in traffic and beat the Uber. Outside of rush hour, it's likely to be slower than a car but still a good value if a station is relatively close to you, and definitely more predictable and less subject to extreme slowdowns during gridlock.

Uber: $39.14 (plus a $7.82 tip). More comfortable than the L, with a guaranteed seat, but stressful, especially if you're in a rush and have to deal with traffic.

The L was an extremely good value, taking virtually the same amount of time during rush hour as a car, and for way, way less money. There are unquestionably times the L could beat a car during extreme traffic. An Uber or taxi is likely a faster option outside of rush hour, and may be the best choices when you need a a guaranteed seat, are traveling with a number of kiddos or a lot of luggage. But if you're looking for a budget-friendly and more predictable option, mass transit will often be the way to go in your own personal race to O'Hare.