The Great Race to JFK — What's the Fastest Way to Catch Your Flight?

Articles
Liz Hund is a former TPG writer, covering everything from the latest deal to deeper guides with a focus on beginners.
Follow
Aug. 28, 2019
•
11 min read 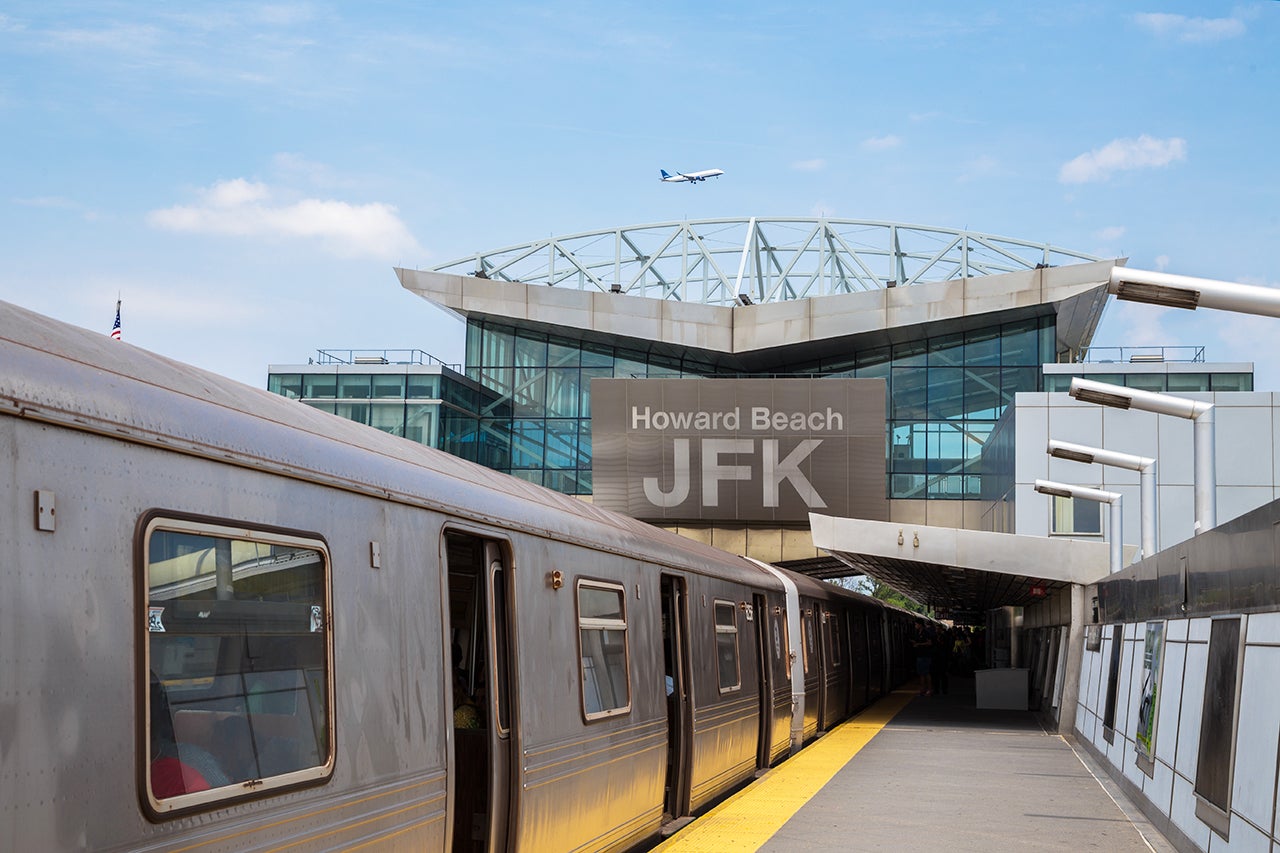 The trip from TPG headquarters to New York-JFK can be 15 miles of aggravation and can cost a bundle before you ever get to the airport.

We wanted to test four transportation modes to the airport to see which one would be fastest and most economical. To help TPG readers decide about their next ride to JFK, we sent our video team — Jess, Sara, Ted and Nat — by Uber, Blade, Subway and the Long Island Railroad (LIRR).

Here's how it went:

The team gathered at TPG's office in the Flatiron section of Manhattan on a recent Monday at 9:15am to test the commute to the city's busy international airline hub. Each staffer drew their choice of transportation. The results were:

Then it was "go time" and for some — Sara on the subway and Jess on the LIRR — that meant ASAP.

Subway: Sara knew it was full speed ahead as soon as she saw "subway" written her card. Assuming there are no delays, it typically takes about an hour and 10 minutes to get to JFK from our office. First step: Catch the No. 6 train at 23rd Street.

LIRR: Jess pulled the LIRR card and headed out for Penn Station.

Blade: Ted pulled the Blade card and started to set up his Blade account.

Subway: By 9:32am Sara was passing 33rd Street on the 6, slightly sweaty from her run to the subway.

LIRR: Jess also headed to the 23rd Street subway station where she needed to catch the W train to get to Penn Station, where she could hop on the LIRR.

Blade: Ted had never flown Blade, which meant he had to set up his account before he could book a ticket. It took about 10 minutes, but at 9:35am he was all set for a 10:20am flight.

Uber: At 9:27am Nat's Uber arrived in front of TPG headquarters.

Subway: Around 9:47am, Sara switched to the E train — or so she thought — and was on her way to AirTrain. Still slightly sweaty but that onboard AC helped.

LIRR: At 9:45am Jess arrived at 34th Street on the subway and made her way underground to Penn Station.

Blade: Ted hopped into his Lyft at 9:45am. It's usually about a 20-minute ride from the office to the Blade Lounge West, but it depends on the traffic.

Uber: At 9:45am, Nat had already made her way out of Manhattan and was driving through Long Island City in Queens. Meanwhile, her competitors were still in Manhattan getting ready to leave or trudging through the muggy subway station.

Subway: Sara was doing so well ... until she realized she had accidentally taken the M train instead of the E train. Fortunately, it was an easy switch and at 10:03am she was on the right subway.

LIRR: At 10am Jess bought her ticket for LIRR.

Blade: Stuck in Manhattan traffic until 10:07am. At 10:10am Ted was enjoying a complimentary glass of rosé — because did you really fly Blade if you don't drink the rosé?

Uber: At 10am, Nat exited the Grand Central Parkway, putting her just 12 minutes out from JFK. Once again, half her competitors were still in Manhattan.

Subway: About 15 minutes after boarding the E train, Sara was only one stop away from the AirTrain — so far, so good considering she was expecting to lose.

LIRR: Ten minutes into her ride and the train was nearly empty, but who's to complain about that? Lots of room to stretch out.

Blade: Because Ted was the only passenger booked on the 10:20am flight, they were able to push the ride up to 10:16am.

Uber: At 10:17am, Nat was the first to arrive at the JetBlue check-in.

Subway: At 10:27am Sara purchased her AirTrain ticket and then hopped on board.

LIRR: Just two minutes behind Sara, Jess pulled into the Jamaica station at 10:30am where she'd wait to catch the AirTrain.

Blade: About 15 minutes after takeoff, Ted had already landed at JFK, relaxed, refreshed and ready to win. He confidently hopped in the Blade shuttle and directed the driver to drop him off at the TWA Hotel because that's where he thought the team was meeting. At 10:35am he realized he was mistaken and started running to Terminal 5, the designated meeting place.

Uber: Fifteen minutes waiting for the others to arrive ...

Subway: At 10:46am Sara met Nat and Ted in Terminal 5, putting her in third place.

LIRR: After a 10-minute wait, the AirTrain finally left around 10:45am. Had it departed earlier, Jess would have been vying with Sara for third place.

Blade: At 10:43am Ted realized that his mistake cost him first place and he finished second behind Nat, who had taken the Uber. Even more surprising, he was only three minutes ahead of Sara, who had taken the subway and made some mistakes along the way.

Uber: After waiting 30 minutes, Nat finally was joined by Ted and then Sara.

LIRR: Finally, at 11:02am, Jess made it to the JetBlue check-in area where the rest of her teammates were waiting.

Uber: Forty-five minutes total waiting on everyone else to arrive.

Subway: For less than a quarter of the price of an Uber — which is subject to surge pricing — and only 30 minutes longer, this is a pretty good deal. Of course, the subway is subject to delays and overcrowding, but if you're traveling during off-peak hours, you might as well save yourself some money and take the subway, especially if you're traveling solo. If you're traveling with others, it might make more sense to split the price of a car to alleviate the stress of group travel through pubic transit. Another thing to consider is how much luggage you have. If you're already struggling getting it all down from your apartment or hotel then getting it up and down the stairs of the subway station is not going to be an easy or pleasant task.

Blade: First off, who doesn't want to travel to the airport via helicopter? Well, the answer is, those who don't want to fork out the price of a ticket. Although this is the most luxurious option, it's not the most economical -- about triple the price of an Uber -- and surprisingly it is not the fastest way either. Granted, it was only about 25 minutes behind the Uber (because Ted mistakenly went to the TWA Hotel first), but it was still second. This option makes the most sense to use when you're headed to the airport during high traffic or when you have a tight schedule to juggle between work and flights.

Uber: The car was the fastest mode of transit in this race, but this certainly depends on the time of day you're headed to the airport. The door-to-door service makes the whole trip fairly stress free. The only thing you have to worry about is a traffic jam, but at least you'll be stuck alone in an air-conditioned car instead of a crowded subway car. Depending on where you're coming from in the city and the time of day, it can be pricey. It wasn't terrible for Nat at $57 after rush hour from the East Side of Manhattan, but that greatly depends on time and location.

The most economical ride to the airport is clearly on the subway, followed by the Long Island Railroad. The most important considerations are the time of day and your starting point. Although the Uber wasn't outlandishly expensive, if you're not in a hurry and are willing to give up the convenience of door-to-door service, you might as well save your money for vacation and take the subway. Uber is a great option for groups and those who don't like the hassle of public transportation. If you're not familiar with New York's subway system and don't trust yourself to figure it out, then the door-to-door service might preserve your sanity. As for the Blade, this is not geared towards everyday travelers. Although it would be amazing to arrive by helicopter for every flight, it's only feasible for a select few.

As expected, there are not a whole lot of amenities included in the commute to the airport. The exception is the luxury treatment from Blade, but that should be expected, given the price. Travelers should worry about amenities when they get to the airport itself -- does it have a Priority Pass lounge? And do you have the right card to get you into a lounge?

The results were almost exactly as we expected, except we were surprised that Blade came in behind Uber. What we learned is that your starting point and time of day are the two most important considerations in choosing your ride to the airport. Where you're coming from in the Big Apple makes a big difference in determining what's the fastest and most affordable ride, but there is also wide variation depending on the time of day. If you're headed out from the Flatiron after rush hour, taking a car is going to be the fastest, but the subway is least expensive.

Regardless of which option you choose, make sure to follow TPG for future exciting races, and let us know what you thought of our race to JFK.

(The Cost & Time Breakdown table has been updated to correct an erroneous number.)