7 spectacular European train trips you need to take this fall

Articles
Lori Zaino is a writer for TPG and TPG UK covering travel, news, points and miles and more. She's been based in Madrid, Spain almost 15 years and is an expert in travel throughout destinations such as Europe, Southeast Asia and Africa.
Follow
Oct. 08, 2022
•
8 min read 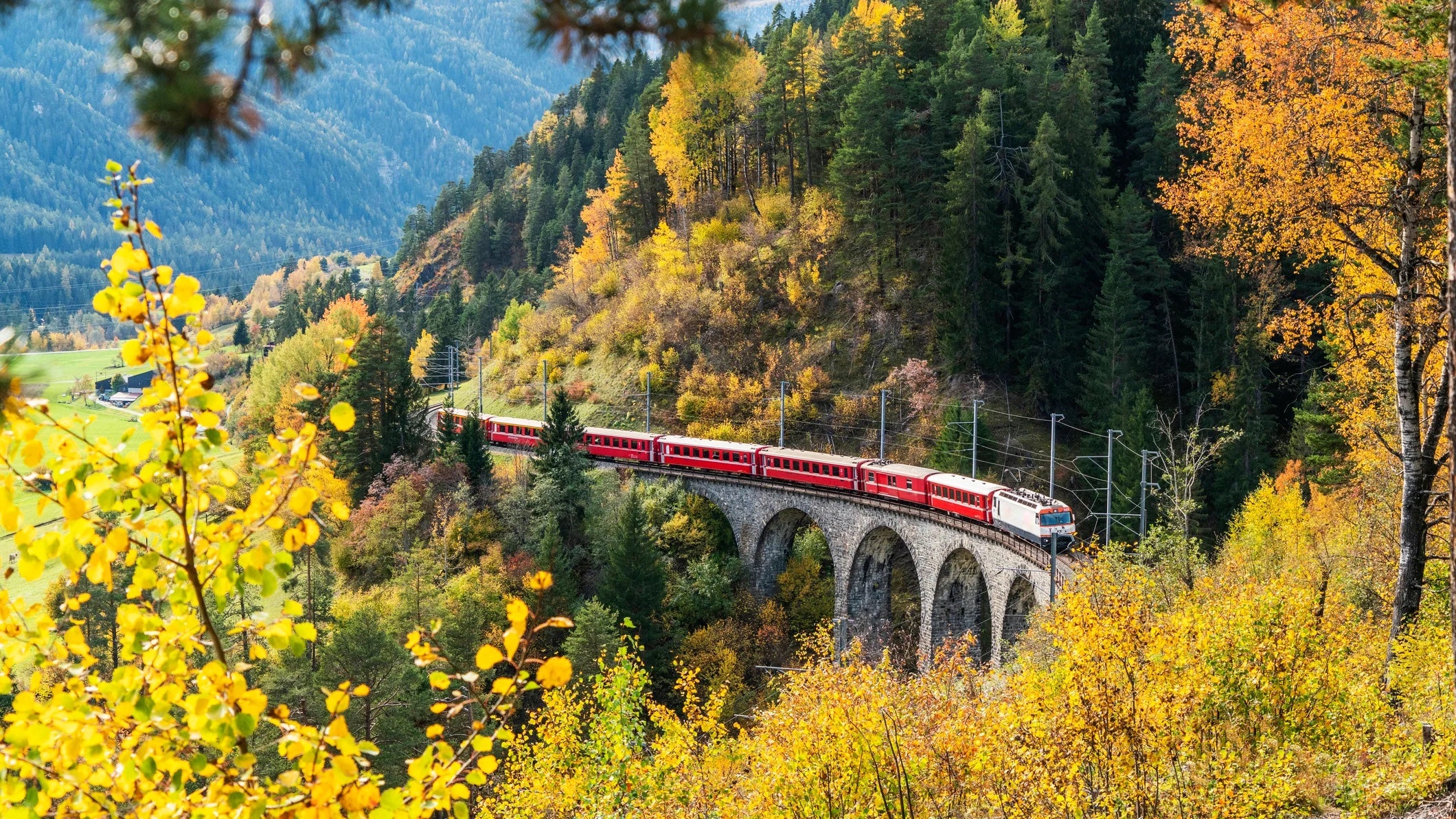 There are many ways to explore Europe, from incredible hikes to scenic drives. An underrated way to enjoy the continent during the fall months, however, is by train.

With autumn's melange of hues (russet, mustard, sepia and beyond), embarking upon a rail adventure can be the perfect way to indulge in a bit of leaf peeping, via an array of different train routes.

Here are some of the most interesting rail journeys for admiring fall foliage and visiting charming fall destinations in Europe.

Domodossola, Italy, to Locarno, Switzerland, on the Foliage Train

There’s nothing more apt for an autumnal railway adventure than a train named the Foliage Train. Operated by the Italian-Swiss Vigezzina-Centovalli Railway, this route is 52 kilometers (32 miles) long and travels between Italy and Switzerland.

The route weaves through wooded, mountainous scenery just north of the Monte Mottac State Reserve, passing hilltop villages and fertile valleys, and crossing over 83 bridges during the two-hour ride. Start in the medieval town of Domodossola and end in Locarno, a quaint Swiss town on the banks of Lake Maggiore.

Adult one-way tickets start at 33 euros (around $32) and include an optional stop at any of the charming villages the train runs through along the way (such as Malesco, Druogno or others). The train only runs during the autumn season.

Munich to Fussen, Germany, on the Deutsche Bahn

This train itinerary starts in Munich, where you can sip a stein of beer or some warming mulled wine before hopping on the two-hour route to Fussen.

The first section of the trip is fairly standard, but once you pass by Buchloe, you’ll roll past deep valleys at the foot of the Bavarian Alps. Once you arrive, take a bus, catch a taxi or walk through the wooded path for about an hour to the famed Neuschwanstein Castle, admiring the changing leaves along the way.

Related: How to visit the magical castle that inspired Walt Disney

Fort William to Mallaig, Scotland, on the West Highland Line

Known as one of the most picturesque train routes in the world, Scotland‘s West Highland Line runs from Glasgow to Mallaig. The five-hour journey is incredibly beautiful, passing through spots like Loch Awe, Loch Long and Loch Etive.

The highlight of the trip is the 1 1/2-hour stretch between Fort William and Mallaig, famous for the iconic, curved Glenfinnan Viaduct. You may recognize it from "Harry Potter" movies. The Hogwarts Express crossed it.

One-way ticket prices start at 29 British pounds ($32) for the entire journey from Glasgow to Mallaig, or just 7.80 pounds (about $9) for the section from Fort William to Mallaig.

Madrid to Aranjuez, Spain, on the Strawberry Train

This vintage train experience runs from Madrid to the nearby suburb of Aranjuez, famous for two things: its lavish, enormous palace and its delicious strawberries.

This particular route, Tren de la Fresa, is operated by an antique 1960s train departing from the tracks in Madrid’s Ferrocarril Museum. The ride takes about an hour. Once you exit Madrid’s suburbs you’ll roll through the Manzanares Valley and its beautiful strawberry orchards. Although it’s not heavily wooded, it’s fun to see the changing tones of Don Quixote’s landscape as summer turns to fall.

The train runs once per day on weekends at 10 a.m. to Aranjuez, returning to Madrid at 6:30 p.m. in September, October and on select dates in November (as well as in the spring).

Adult round-trip tickets cost 25 euros (around $24) and include strawberries on your return trip. You can also purchase packages that include entrance and tours to the Royal Palace and its gardens.

Dombas to Andalsnes, Norway, on the Rauma Line

This one-hour-and-40-minute train journey is one of the most beautiful in Norway. It traverses jagged peaks and Norwegian villages like Lesja and Bjorli before ending up in the fjord of Andalsnes.

If you’re a fan of the "Harry Potter" movies, one of the only parts of the films shot outside the United Kingdom was filmed on this railway. Highlights include crossing over the tree-flanked Rauma River on the Kylling Bridge, where you can catch a glimpse of the Vermafossen waterfall. Once you reach Andalsnes, hop off the train and walk over to the Romsdalen Gondola station to head more than 5,000 feet up on the fjord.

One-way tickets on the Rauma Line start at around 16 pounds (around $18) each way.

This bold-yellow SNCF train runs through the French Pyrenees on a route packed with impressive scenery which ranges from wooded pastures and tiny French hamlets to the valley of Tet.

The train crosses a number of viaducts, bridges, tunnels and a railway suspension bridge before arriving at Latour de Carol, a town that borders northern Spain. Once you hop off the train, you can actually cross the border to Spain on foot or pick up another train that will take you to Barcelona.

The route takes less than three hours, and prices are available on SNCF. Do note that, due to track construction, there may be limited trains this season.

Related: Which first-class high-speed rail service between Milan and Paris is best?

St. Mortiz to Zermatt, Switzerland, on the Glacier Express

Although the name Glacier Express may conjure up distinctly winter vibes, taking this Swiss route in autumn allows your eyes to feast on the medley of colors along Switzerland‘s tree-covered slopes.

The ride is around eight hours, though you can take just part of the journey, too (some of the best views are between Andermatt and Disentis). Once you reach Zermatt, you can’t leave without checking out the iconic Matterhorn, one of the most famous peaks in the Swiss Alps.

This particular train runs through October but takes a break in November before starting up again in the winter. One-way ticket prices are around 180 pounds (nearly $200) in second class and 200 pounds ($220) in first class, which offers a more spacious seating layout and upgraded service.

Related: How to plan your 1st luxury train trip

Take a train this fall

Trains in Europe are a fun and easy way to enjoy autumn foliage, as well as the perfect way to travel to autumn festivals and seasonal foods at your destination during this shoulder season.

Travel during this season can often be more affordable than in the summer months, providing the opportunity to save money and face fewer crowds, too. Trains are ideal for all types of travelers (families, couples and solo travelers), so consider ringing in sweater season with a scenic railway adventure.

Related stories
What are points and miles worth? TPG’s December 2022 monthly valuations
Capital One Venture X to lose Priority Pass restaurants and spa services as of Jan. 1, 2023
December 2022
Current Hyatt promotions: Bonus points on stays and dining plus double stay credits
Featured image by ROBERTO MOIOLA/SYSAWORLD/GETTY IMAGES
Editorial disclaimer: Opinions expressed here are the author’s alone, not those of any bank, credit card issuer, airline or hotel chain, and have not been reviewed, approved or otherwise endorsed by any of these entities.