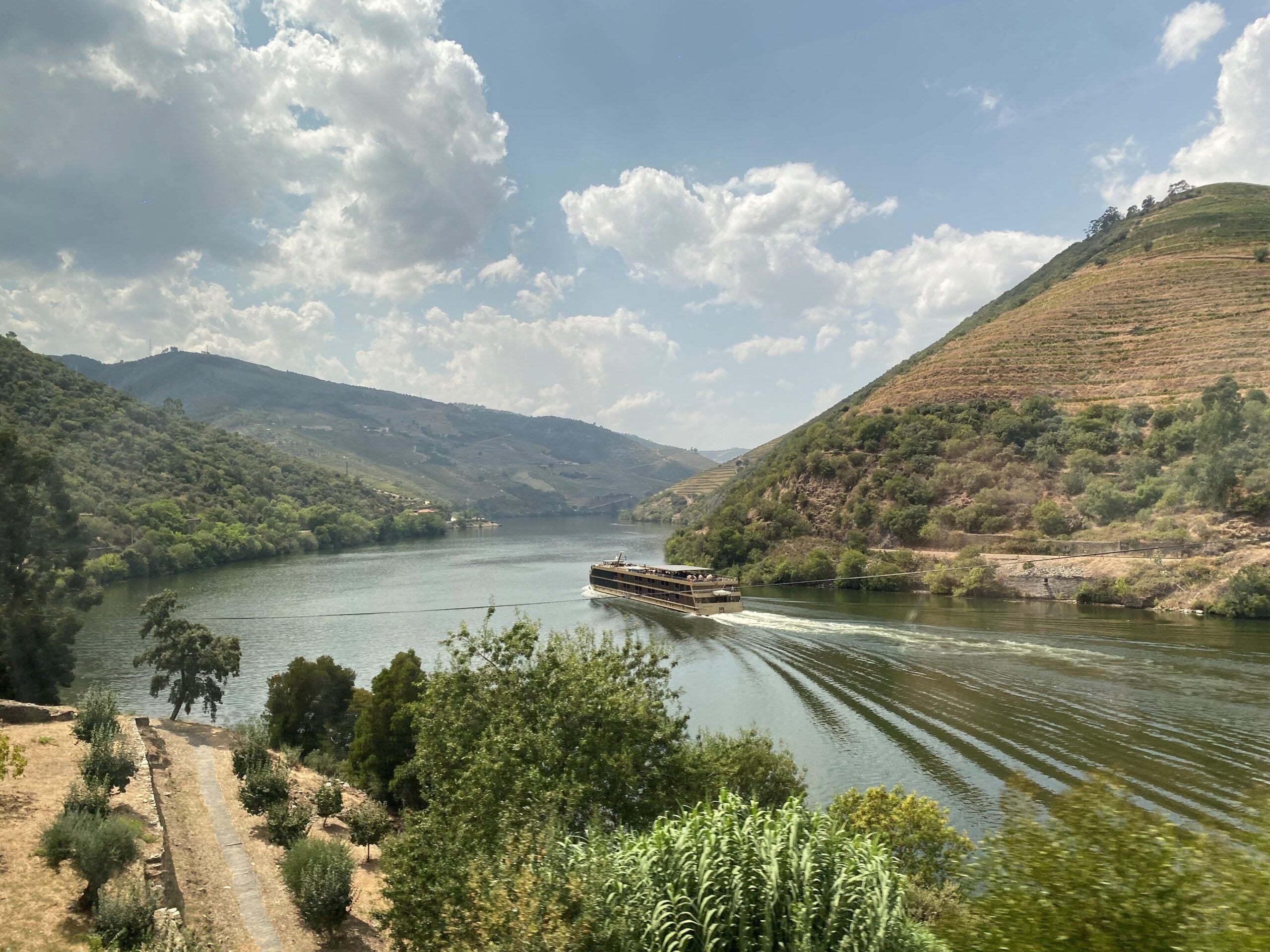 Traveling with a group of friends can be a lot of fun. But it also can be a challenge.

As I've experienced first-hand over the years on trips with friends, just picking a place for dinner on any given night when traveling with more than five or six people can be a daunting exercise. Everybody has a different idea of where to go and when.

Ditto for the process of arranging hotel rooms, transportation and tours.

This is one big reason that my wife and I and three other couples that we have known for years chose an AmaWaterways cruise on the Douro River in Portugal for a group trip last week.

One of the big allures of river cruises offered by the likes of AmaWaterways is that the cruise line generally figures out all of the logistics of a trip for you. They get you from place to place, feed you and take you on tours -- all for one set price.

In short, river cruises are easy trips for groups to do. But, as we discovered last week while sailing up the Douro on AmaWaterways' 102-passenger AmaDouro, a voyage on this particular river is a great friends group getaway in more ways than one.

The Douro River has some specific attributes that make it a perfect place to visit with a friends group. Here, five reasons you might want to consider a Douro River cruise for your next getaway with friends:

Sometimes, when you're seeing old friends, all you want to do is sit for hours and catch up -- maybe over a glass (or two or three) of wine, or something stronger. As we experienced last week, Douro River cruises are ideally structured for just this sort of thing.

Unlike some other river cruise itineraries, Douro River sailings aren't jam-packed with so many outings to historic sites and museums that you barely have time to change for dinner. Instead, they revolve heavily around relatively laid-back visits to the vineyards that line the Douro River for tours and, perhaps more notably, tastings that have the flavor of a night out at a wine bar.

The Douro River Valley is particularly known as the home of port -- the fortified wine created in the region in the 1600s -- and, as we saw on our AmaWaterways cruise up the Douro river last week, just about every activity on a Douro sailing ends with a sampling of the drink.

Lunches and dinners feature Douro-made wines, often finished with a glass of port, too, and there is plenty of down time on Douro itineraries to sit up on your ship's top deck talking with friends -- more often than not, with another glass of port in hand.

As a result, cruising on the Douro often feels like being on one big, extended wine bar crawl, with your ship a delivery vehicle to get you from one wine venue to another. With a group of friends this can be a lot of fun, like a meet-up for drinks that goes on not just for a few hours or days but a full week.

Just be warned: If you're not a wine or port drinker -- or interested in vineyards or wine-growing history -- the trips might not be as exciting for you as some other river trips.

Also know that Douro River cruises include a fair amount of travel by motorcoach, as the vineyards you'll visit and some historical sites in the Douro Valley region aren't always near the spots along the river where the ship docks as it travels. You can't always just walk off your vessel into a waterfront town to explore.

It has just the right amount of cultural diversions

The above notwithstanding, Douro River cruises aren't all about wine and port drinking. They offer a mix of historical and cultural diversions, too; not an overbearing amount, but just enough to provide some diversity of experiences for a friends group focused on reconnecting.

For starters, the trips begin and end in Porto, Portugal -- a charming riverfront city filled with history and culture.

In addition to visiting one of the port wine houses that line the riverbank just across from Porto's historic district (yes, another wine-related stop, with a tasting), our AmaWaterways cruise included a walking tour to some of the city's most historic spots.

Guided by a local, we rambled through the narrow alleys of Porto's waterfront Ribeira area, a UNESCO World Heritage Site, and climbed the hilly streets to the soaring Clérigos Tower, a Baroque masterpiece that dates to the 1700s. We also visited Porto's iconic Sao Bento railway station, which is lined with century-old tiles painted with scenes from Portugal's past.

In addition to touring in Porto, our cruise brought a full day of exploring the Old City of Salamanca, Spain, another UNESCO World Heritage Site. It's home to centuries-old cathedrals (in an unusual twist, there are two, side-by-side); the historic buildings of one of the world's oldest universities (University of Salamanca), founded in the 1200s; and even Roman ruins.

Salamanca isn't on the Douro but is reached by a two-hour bus ride from a docking location on the river near the border between Portugal and Spain. Visited on a day trip from ships sailing on the Douro, it's one of the highlights of any Douro cruise.

As noted above, the process of figuring out where to stay, eat and tour when on a trip with a group as big as ours (originally, there were five couples going; one dropped out due to COVID-19 concerns) can be overwhelming. But AmaWaterways makes a week of exploring in the Douro River easy.

The line arranges your lodging (a room on the ship and also on land if you book a pre- or post-cruise land extension); all meals; and tours in every port stop.

Once you're on board, there's almost nothing you have to do when it comes to planning. You basically just show up, and they handle everything. When you pull into a port, they have guides standing at the gangplank ready to take you exploring. If there's a need for a bus to get you to the attraction of the day, they will have arranged it. You just walk outside and step aboard.

AmaWaterways cruises aren't inexpensive. The line's week-long Douro River trips currently start at $3,249 per person, based on double occupancy (for a sailing in November of this year). But you get a lot for the money.

In addition to a room and meals, tours in every port are included in the price. So is wine and beer with lunches and dinners, and the line's Douro ship also has a "Sip and Sail" happy hour before dinner each night with included cocktails such as negronis, cosmopolitans and port tonics (a popular local drink).

The latter perk is a significant one for a group of friends sailing together as it does away with the awkwardness of figuring out who is going to pay the drinks bill on any given night.

We've all been on outings with friends where a few people in the group order lots of expensive drinks and others hardly order any drinks at all, and then when it comes time to split the bill, it can be uncomfortable. That's something you won't find happening on an AmaWaterways cruise up the Douro.

It's not too far away

For an American, the vineyard-lined Douro River valley requires a flight overseas and isn't on the main London-Paris-Rome travel circuit in Europe that draws the lion's share of American vacationers. But it's really not all that far away, making it a good choice as a place for a friends group from North America to meet up.

From the New York City area, there are nonstop flights to Porto (OPO) -- the starting point for Douro River cruises -- that will get you there in under seven hours, though some of these flights have been put on hold during the pandemic.

There also are plenty of relatively short (for Europe) nonstop flights from the East Coast to Lisbon, Portugal, which is just a three-hour car ride from Porto. The three couples we met for the cruise flew to Lisbon for a couple nights of touring before the sailing and then hired a private car to drive them up to Porto, stopping at historic sites along the way.

Cruising on the Douro River isn't mass tourism. Far from it. Even compared to river cruising on other European waterways, such as the Rhine and the Danube, Douro River cruises are notably intimate.

For a friends group traveling together, this can mean a feeling of having an almost private yacht.

With COVID-19 worries keeping some travelers away from Europe, the occupancy on Douro River ships this year has been even lower. On our sailing last week, there were just 35 passengers. That meant our group of eight people amounted to about a quarter of all passengers on board.

Related stories
What are points and miles worth? TPG’s December 2022 monthly valuations
Capital One Venture X to lose Priority Pass restaurants and spa services as of Jan. 1, 2023
December 2022
Current Hyatt promotions: Bonus points on stays and dining plus double stay credits
Featured image by The AmaWaterways river ship AmaDouro sails on the Douro River. (Photo courtesy of Nicole Edmund)
Editorial disclaimer: Opinions expressed here are the author’s alone, not those of any bank, credit card issuer, airline or hotel chain, and have not been reviewed, approved or otherwise endorsed by any of these entities.