Articles
Jon Bailey covers LGBT and family travel for TPG, and travels the world with his husband and two daughters exploring deals and undiscovered gems in places both domestic and international.
Follow
July 07, 2019
•
10 min read 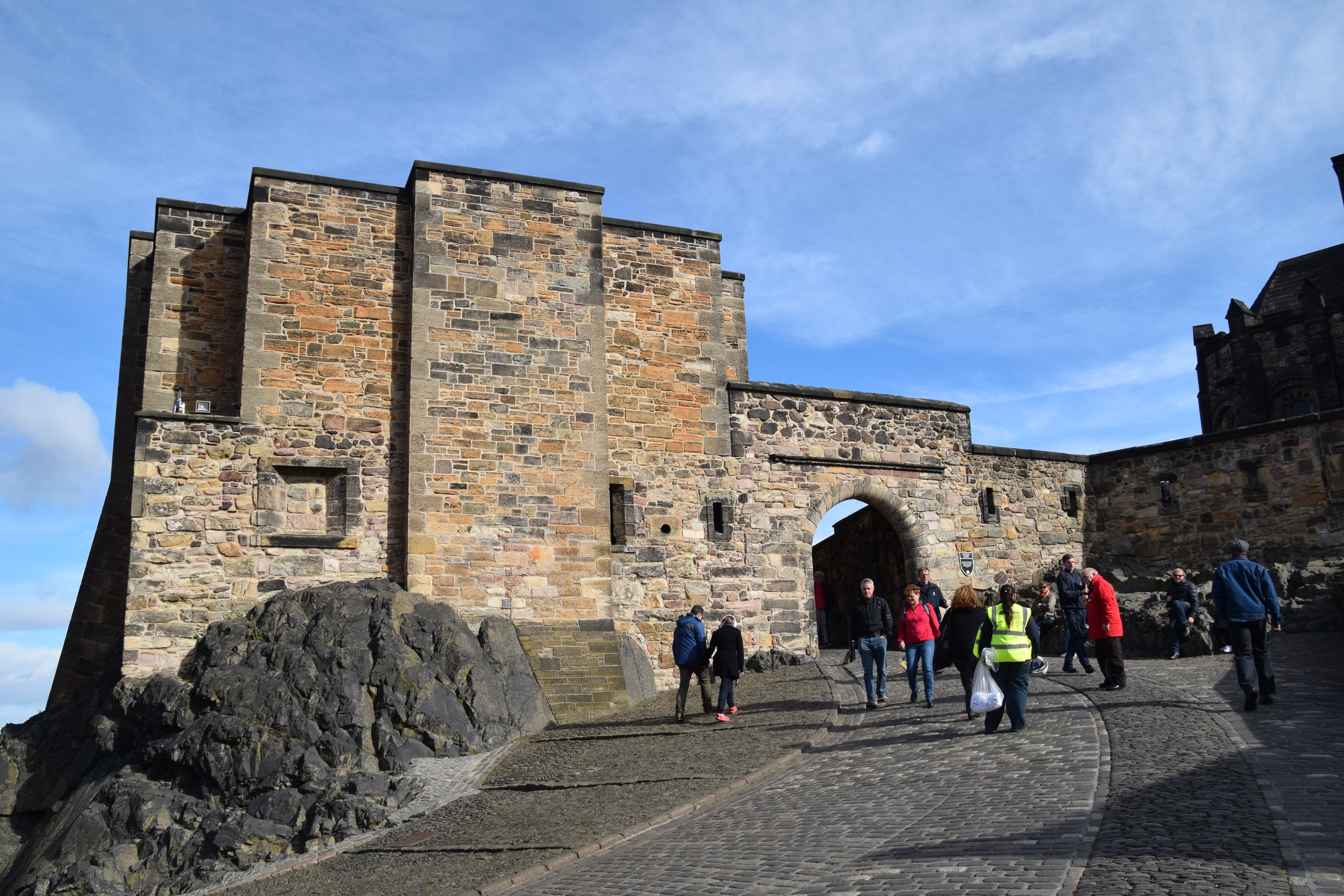 With castles, alleyways and all sorts of history, Edinburgh is medieval, modern and absolutely feels like Europe. In other words, kids will love it. Our youngest daughter and I recently visited Edinburgh and we had the most amazing time both in and out of the city. While Edinburgh is worth staying in for at least several days, it can also serve as a great home base for exploring a little more of Scotland. Here are four kid-approved day trips from Edinburgh.

For our trip to Scotland, we hopped on a British Airways nonstop flight from San Diego (SAN) to London Heathrow (LHR). It was nice to just settle in for the long flight, not worrying about having to change planes until we reached the UK. Once in London, it was a short hop on another British Airways flight from Heathrow to Edinburgh Airport (EDI). (British Airways actually allows for a free stopover in London before continuing on in the UK.)

Related: Related: Best Ways to Use Miles to Fly to Europe

Moving around the countryside in Scotland was easy using ScotRail from Waverley Station in Old Edinburgh. The furthest destination was Abbotsford House, with an £11 ($14) ticket to Tweedbank Station.

There were plenty of cool things to see and do in Edinburgh -- from Edinburgh Castle, to the Palace of Holyroodhouse and everything in between, visitors can walk the Royal Mile and see it all. There is even a website devoted to 101 Things You Can Do in Edinburgh. We barely scratched the surface, but still managed to see at least a dozen or so on that list. (If you time your visit with the annual Royal Edinburgh Military Tattoo, that is an exceptional experience.)

With Edinburgh's Waverley Station so centrally located to most hotels in the city center, we could hop on board and be somewhere interesting in short order.

Our criteria for day trips were simple. We needed to be within a 60-minute train ride from Edinburgh, so we didn't waste too much time on the train that we could be spending on sightseeing. The destination needed to be interesting and not a traditional museum — my daughter's wishes. (My kids get so bored now in many museums, they don't even try to hide it.)

Here's where we went:

Distance: about 40 minutes by train

When people think of grand medieval castles shrouded in mystery and grandeur, they must be envisioning Stirling Castle. Smaller than Edinburgh Castle yet just as magnificent, Stirling Castle sits high on a hill overlooking the town of Stirling and surrounding countryside. On the day we visited, the castle was cloaked in a heavy mist. The weather just added to the overall romance of the visit, making us feel like we had been transported back in time.

Inside Stirling Castle, both kids and adults were well entertained with the décor that mimicked the original experience. Some of the draws for visitors included dungeons, cannons, suits of armor, paintings and tapestries. Attendants working throughout the grounds and interior were dressed in period costumes from the 1500s, when Mary Queen of Scots was crowned here.

Well preserved in much of its original state, the National Mining Museum of Scotland is a fascinating look into the age of coal mining. Opened in the 1890's as the Lady Victoria Colliery, this original coal mine joined many others throughout the United Kingdom in supplying coal that fueled factories and provided energy for homes. Much of the machinery and architecture remain intact, and visitors can tour the grounds and building to learn about mining back in the day.

The kids in our tour group were fascinated (and slightly horrified) to learn that children played a large role in the coal mines. Working in extremely dangerous conditions alongside adults, these kids helped to support their families. Some started at age 8 or younger as indentured workers and were given special jobs to squeeze through tight spaces in the mines because of they were small. The exhibits on display show a difficult life for the working families at coal mines like this one. Luckily, child labor was outlawed and then the Industrial Age put most of the coal mines out of business. If your kids are like mine and like to be spooked, this is the place to take them.

Admission: Guided tours cost about $12 per adult, about $5 for children 8–16 and kids 7 and under are free. Entrance to the exhibits without a tour is cheaper.

For a more peaceful respite, a visit to Abbotsford Manor is a gentle way to spend the day. The grounds of this stately manor house are gorgeous, with walled gardens filled with roses and colorful flowers of all kinds. The surrounding land is covered with green grass and large trees, making Abbotsford House the perfect aristocratic country estate. This was actually the home of Sir Walter Scott, a famous Scottish poet and playwright. He wrote popular hits such as “Ivanhoe,” “Rob Roy” and “The Lady of the Lake,” among many others.

Evidently, Sir Walter was also a bit of a pack rat. Many of his collections are on display throughout the house, much as he left them when he died in 1832. Entering the house, guests are struck by a large hall completely adorned from top to bottom in antlers, taxidermy animal heads, skeletons and all manner of bric-a-brac. I could have stared at all this for hours, but the fantastic audio tour kept our pace brisk as we moved from room to room. We had a blast pretending we lived here. In the dining room, set for a dinner party of at least 20 guests, we imagined having tea with the queen.

Admission: About $14 for adults, children 17 and under are about $6 and kids under 5 are free. Admission includes the house, chapel and gardens.

Near each other in Falkirk, the Falkirk Wheel and the gigantic sculpture of The Kelpies are off the beaten path. In fact, on the day we visited, there were few other people there at all. Both sights are very large, and it was fascinating to learn how and why these attractions even exist.

At the Falkirk Wheel, we learned that travel by waterways was the primary mode of transportation in Scotland before trains, roads and vehicles. Canals join towns from one side of the country to the other, and boats would carry goods and people to and fro. Scotland is hilly, and in some cases, the canals needed adjustment for the water to flow comfortably for boats and passengers. Locks were introduced so that boats could travel from a high canal to a lower canal. A feat of engineering completed in 2002, the Falkirk Wheel is designed to move a boat a considerable distance up or down. It looks something like a carnival ride but is really an elaborate mechanism to lift our tour boat (with us in it) inside a lock filled with water.

The ride and tour was well worth the time, and we enjoyed the experience because it was so unexpectedly interesting. Nearby, a beautiful trail winds along the canal, and visitors can rent a bike to ride over to The Kelpies should they want to burn some energy. It's just about 8 miles. Ava did not feel like riding a bike and was content to feed the ducklings in the nearby reeds.

Down the road, The Kelpies is a stunning modern sculpture that looks like giant horses' heads. (And by giant, I mean more than 100 feet high.) Towering into the sky, the sculpture is made of metal panels and catches the sunlight in interesting reflections. The two heads are actually kelpies, mythological Scottish creatures said to be able to transform their shape at will. They often chose the appearance of a horse to represent strength and fortitude. Situating them next to the canals was a symbolic move to signify Scotland’s progress into modern technology.

Visitors can walk directly up to the sculptures, getting a true sense of their size. Ava and I walked the grounds to see The Kelpies from different angles, searching for the perfect photo op. Because they are so huge, it was hard to take a selfie, but I think we managed pretty well.

Admission: About $10 for adults. Children 5–15 are free (two free kids with each paying adult) and kids 5 and under are free.

Edinburgh is a fascinating place. After your family visits the must-do sites -- Edinburgh Castle, St. Giles Cathedral, The Heart of Midlothian and The Palace of Holyroodhouse -- it is worth planning a few day trips to explore the surrounds.

Continue planning your trip to Scotland: