Skip to content
Maximize your travel
Change To UK

This summer we spent three nights in Edinburgh as part of a trip to the United Kingdom, and we honestly didn’t really know much about what we were going to do before we got there. With two young kids, one of whom is only a one year old, we didn’t want to over-plan and then end up disappointed when we weren’t really able to do very much. Since much of Edinburgh is pretty walkable we decided to just take advantage of our well situated hotel on the Royal Mile and just go with the flow. This lack of in-depth planning means that we likely we missed out on a few things here and there, but we really enjoyed what we did see, eat, and drink…all with kiddos along for the ride.

While there is much more we have yet to explore in this great city in the future, here are five fun things for families to enjoy together while in Edinburgh.

We have enjoyed the heck out of afternoon tea before at the Brown’s Hotel in London, so we wanted to give it a shot in Edinburgh. For those who haven’t experienced afternoon tea before, it is less about the tea, and more about the food. Sure it is “just” finger foods and sandwiches, but they are delicious and so filling you will probably leave quite stuffed. Even my ‘meat and potatoes’ husband enjoys afternoon tea. 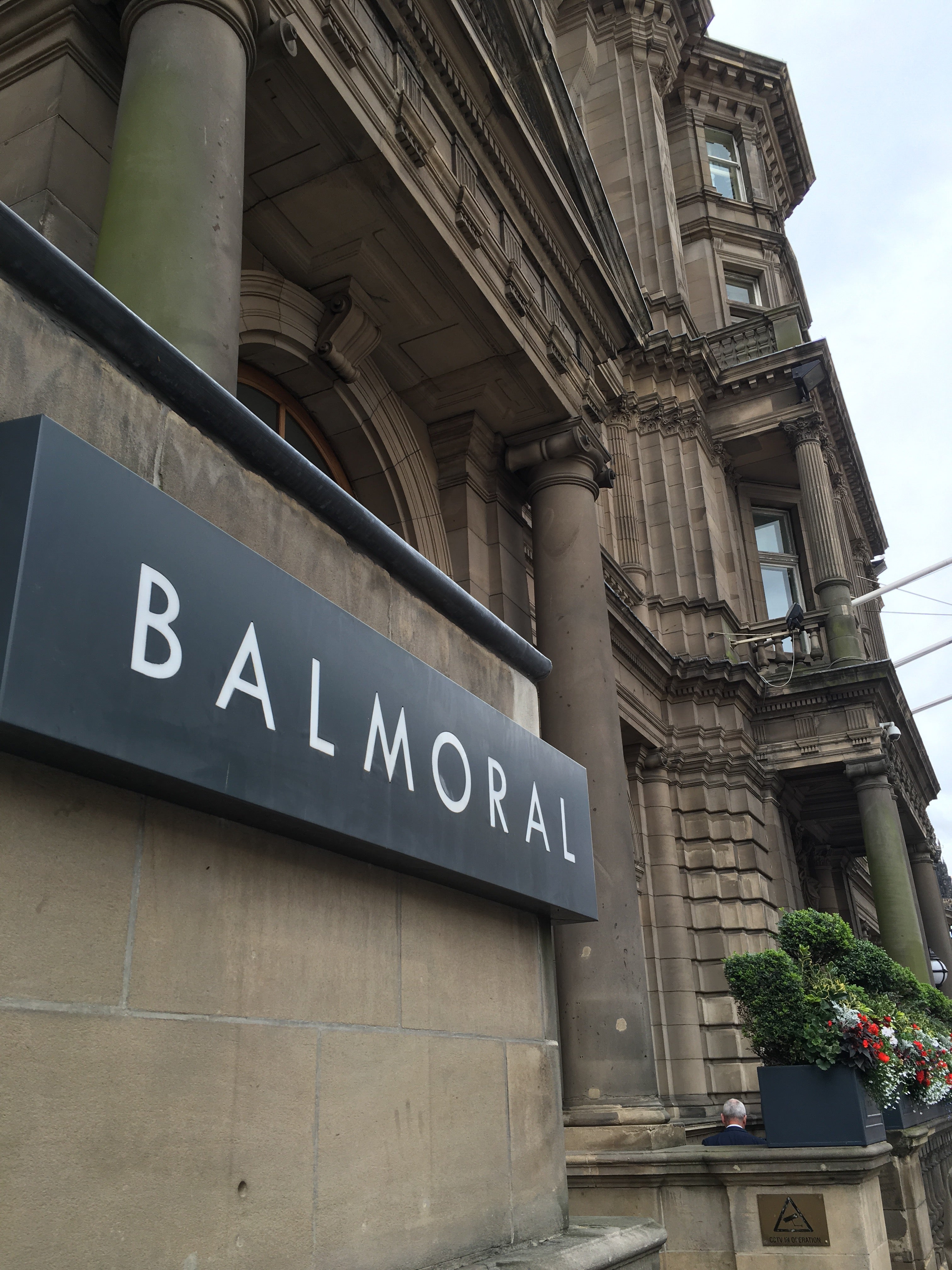 This time we had afternoon tea at the Balmoral Hotel in Edinburgh. We made our tea reservations for lunchtime online ahead of time, but unlike at some places you didn’t have to pay online in advance so that worked out much better for us in the event we couldn’t make our reservation due to epic kid meltdowns or similar. 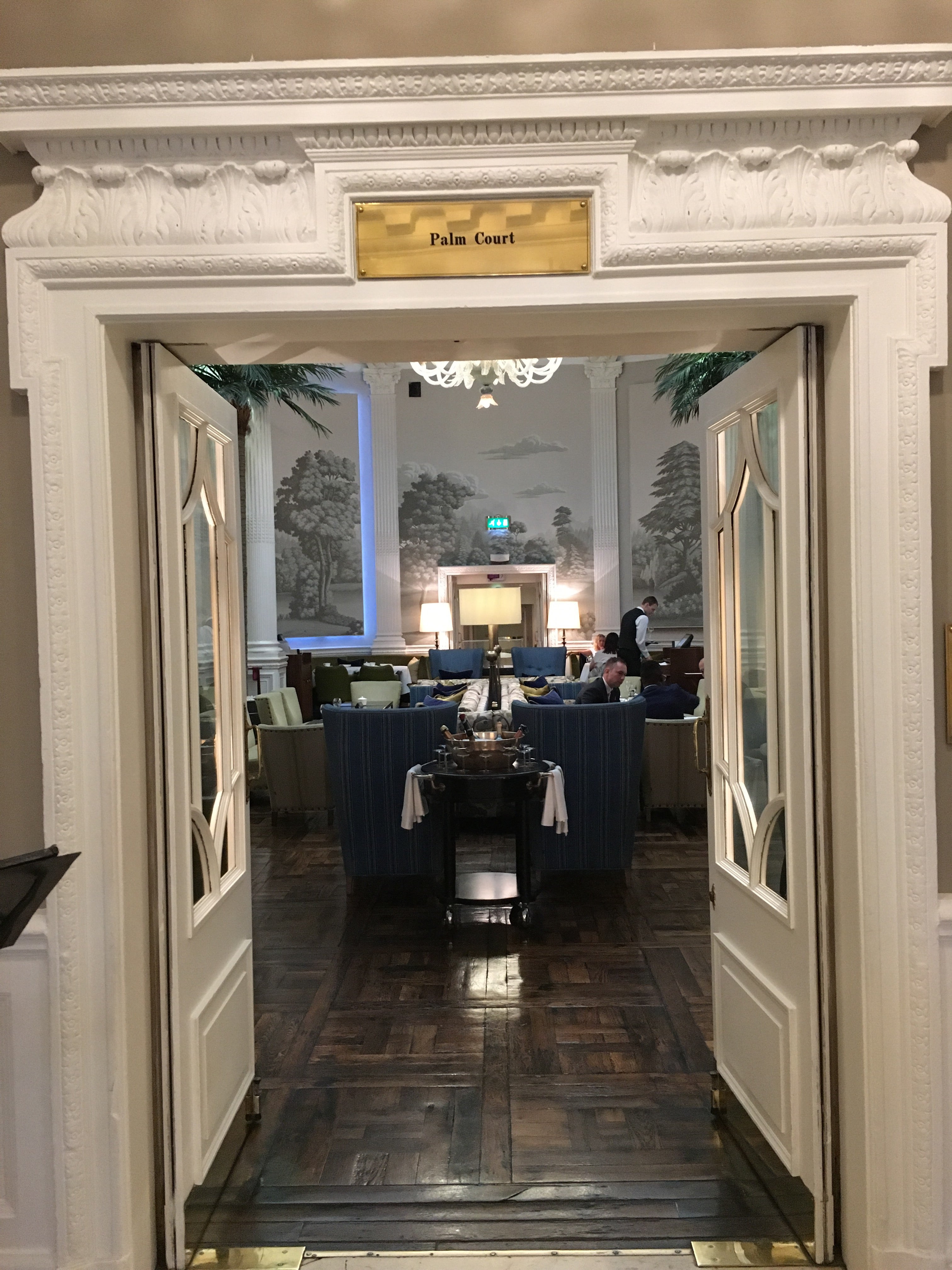 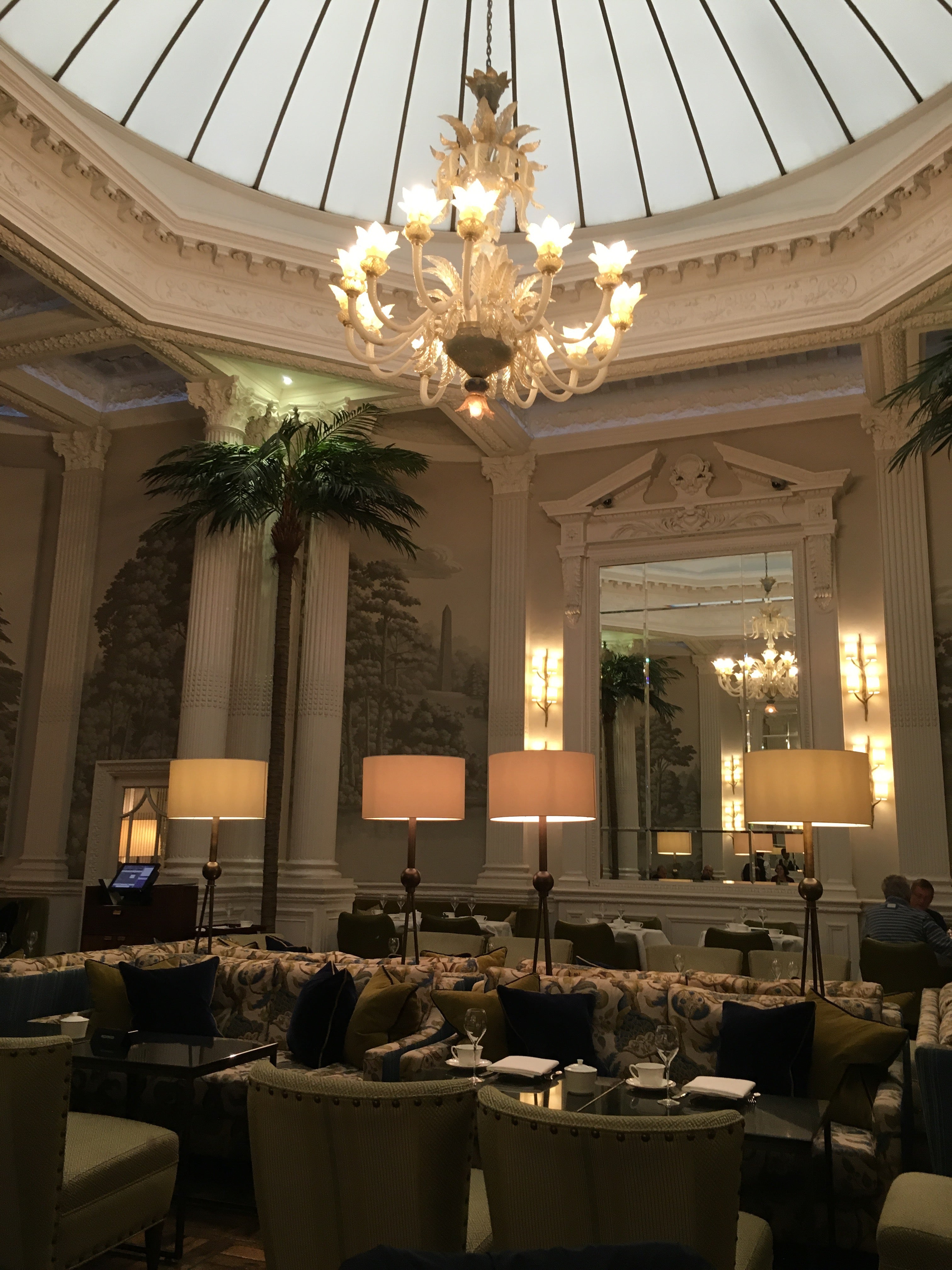 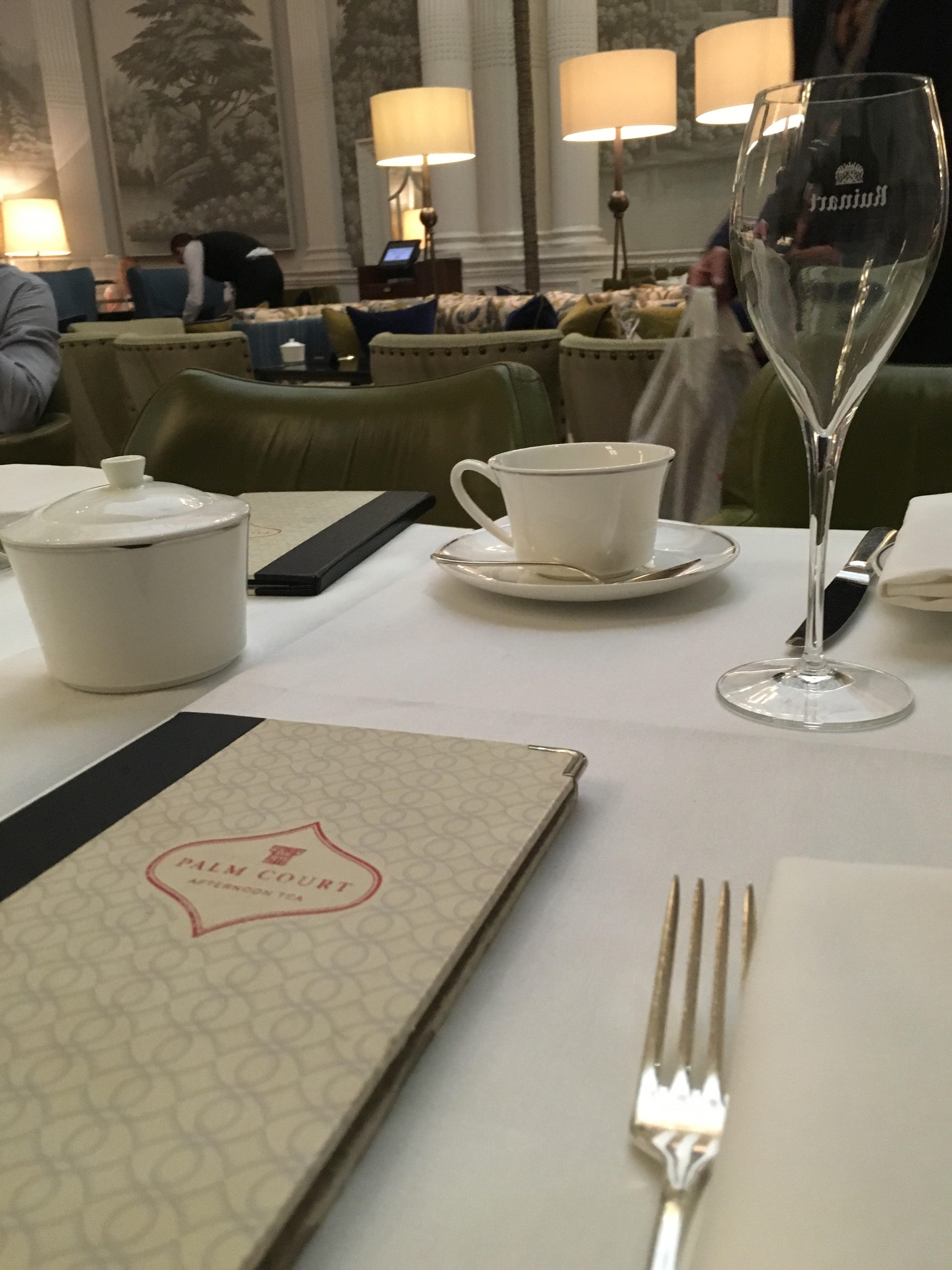 Afternoon tea is a leisurely activity, so if you are going to do it with a young child, be ready to take turns exploring the hotel with them…at least until they fall asleep. Our older daughter enjoyed trying the different treats and pretending to be “fancy” for an hour or two. 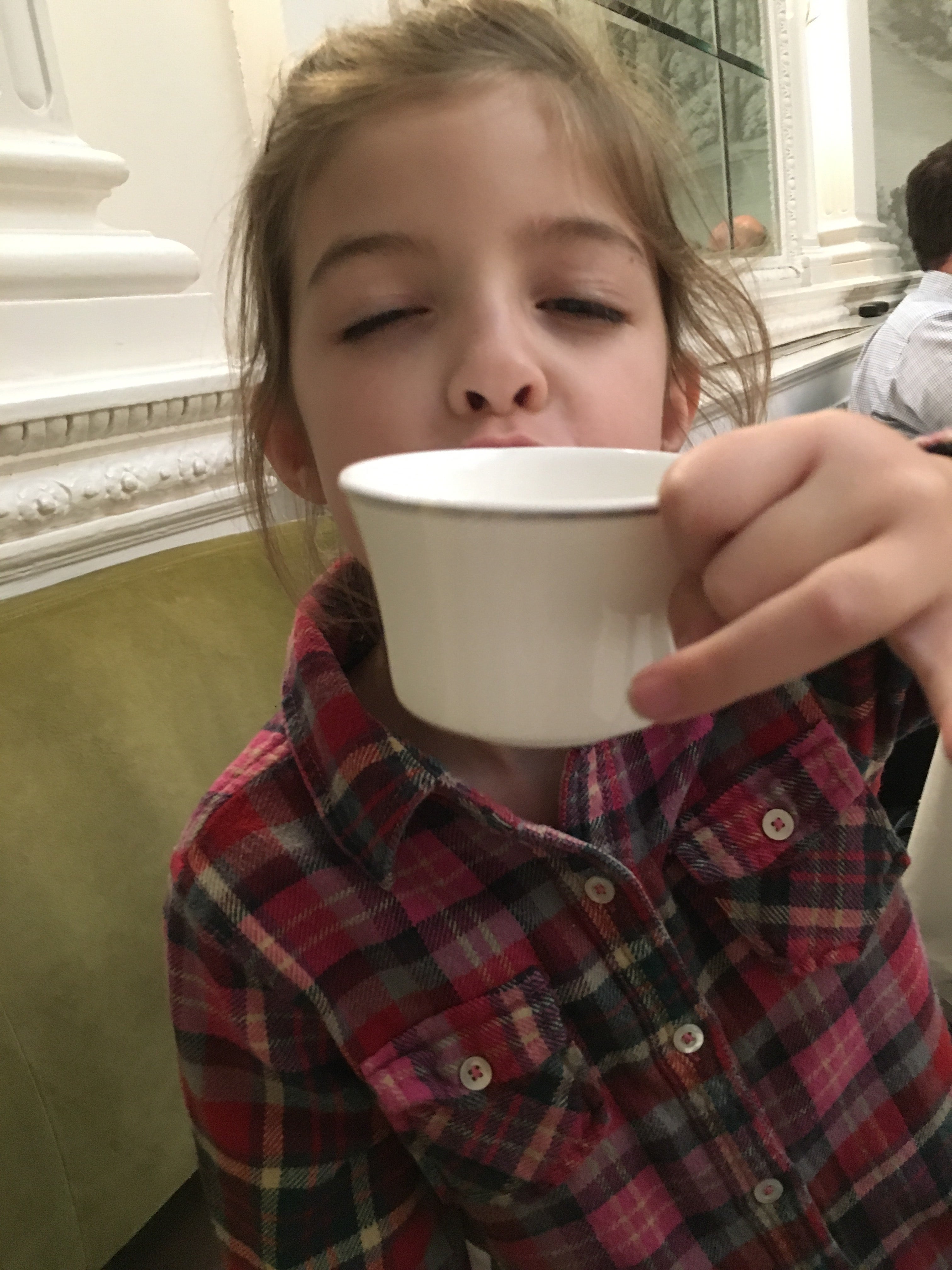 Okay, well not too fancy I guess… 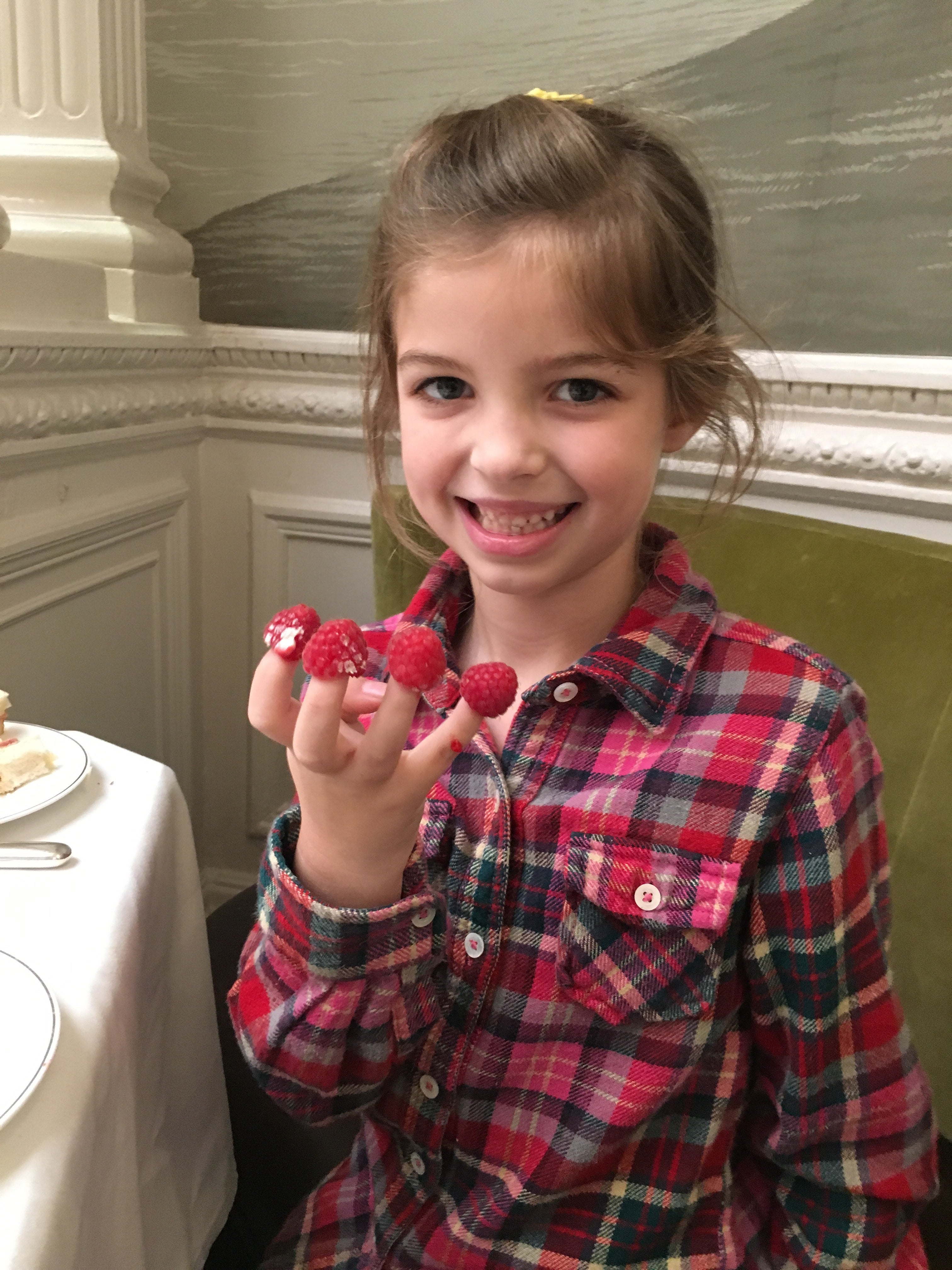 The adults are ones who really enjoyed trying the various treats and just sitting for a bit. Admittedly it would have been a much more relaxing event without taking turns with the squirmy toddler, but it was still worth it overall to enjoy the food and experience. 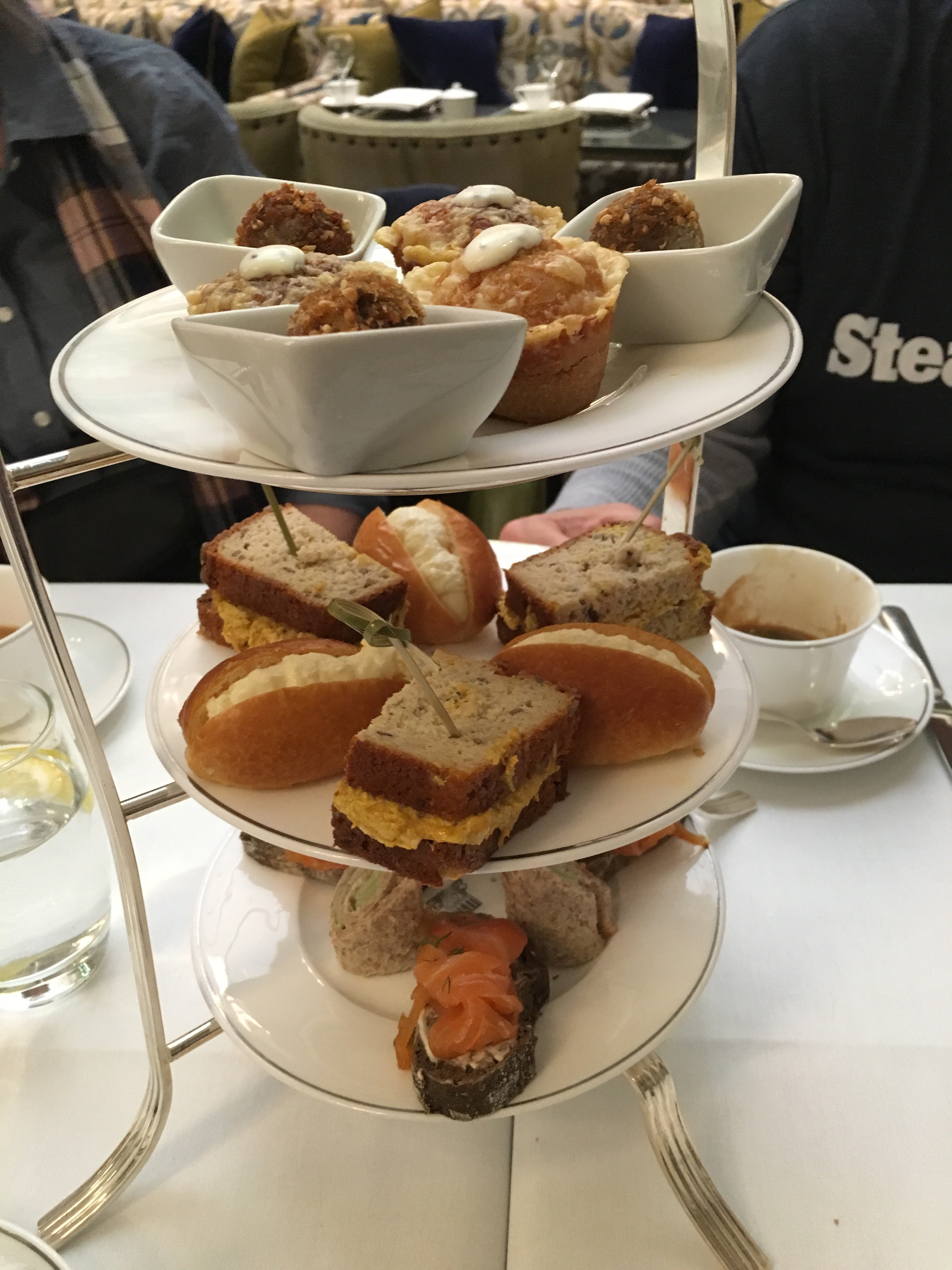 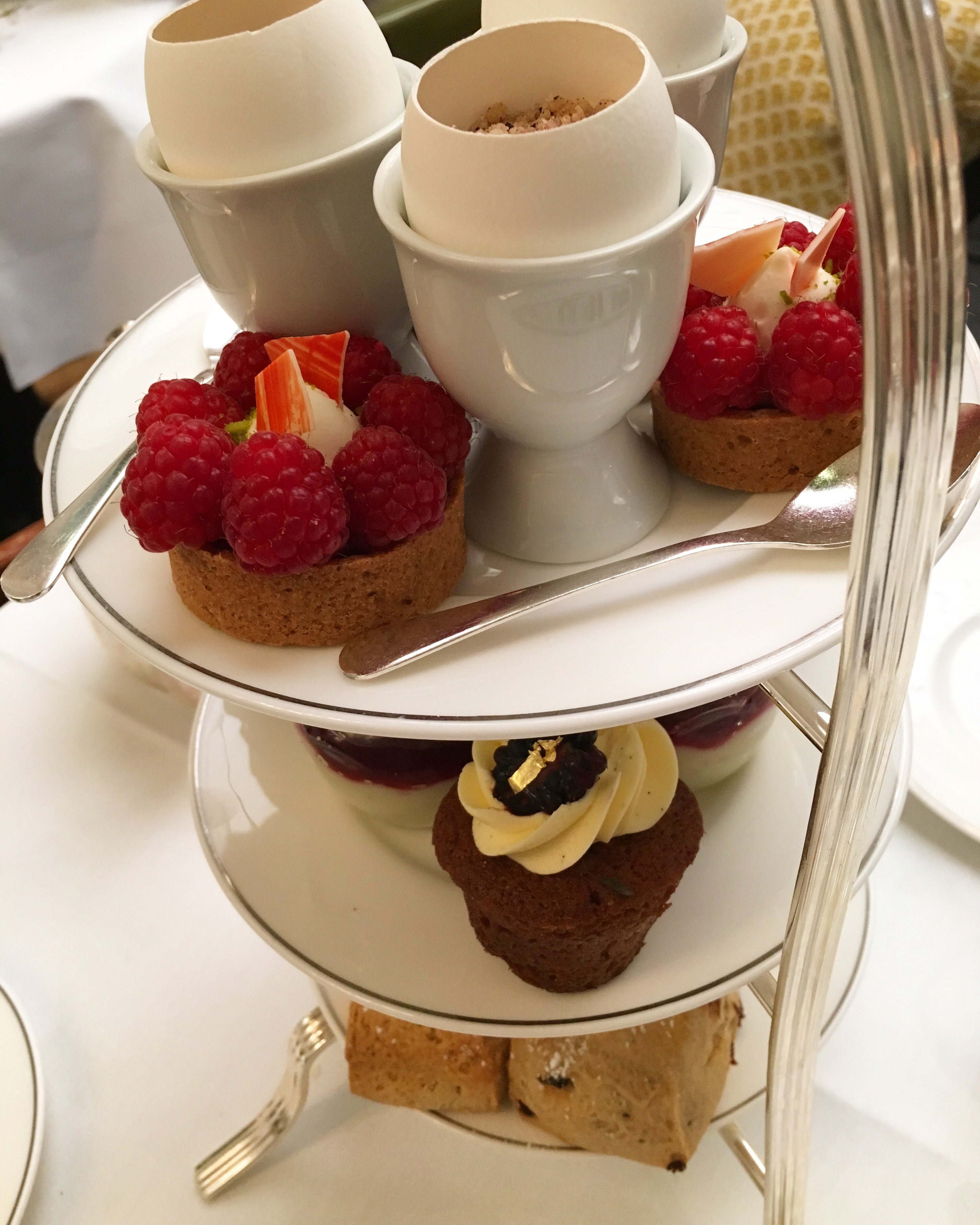 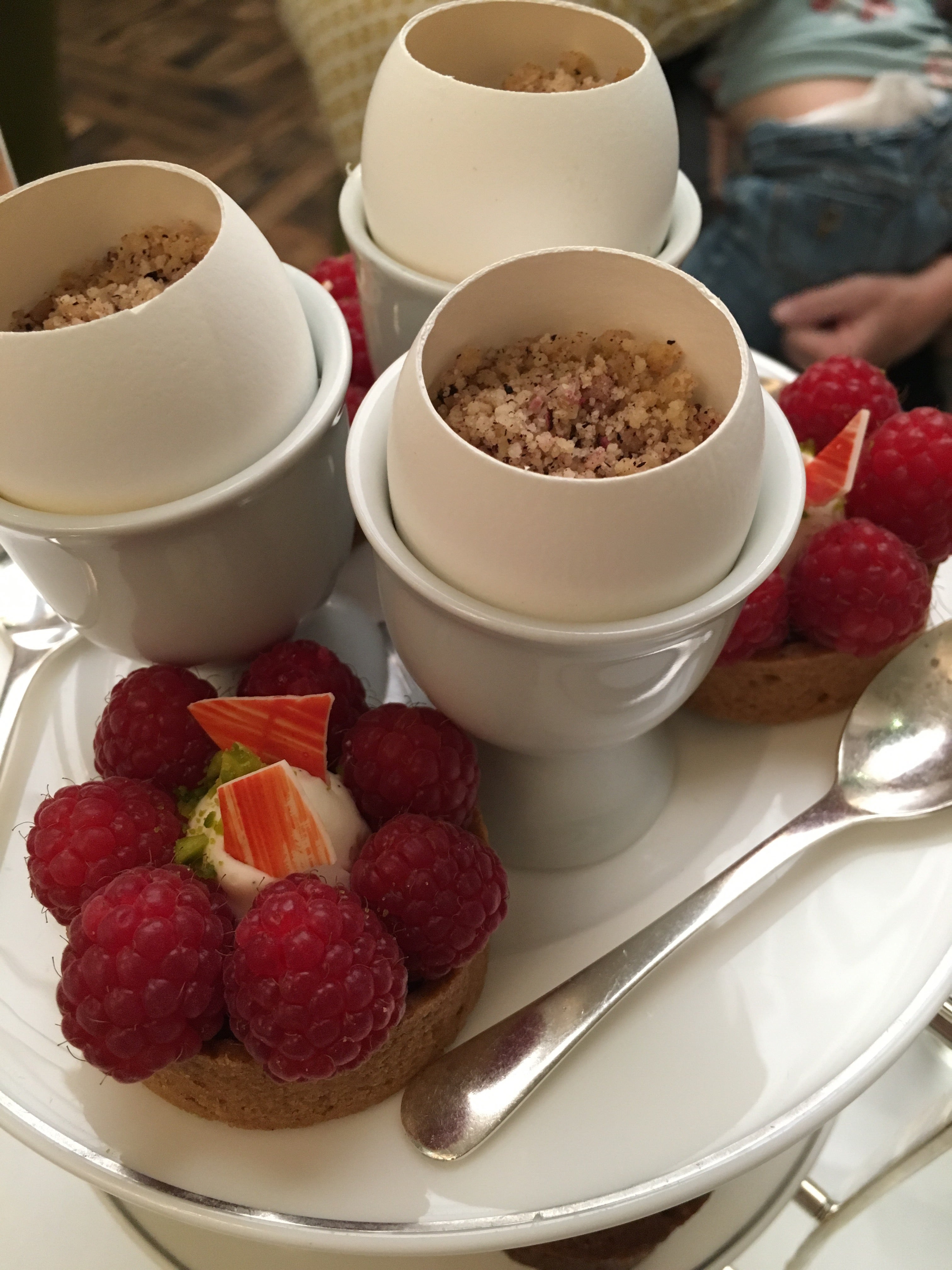 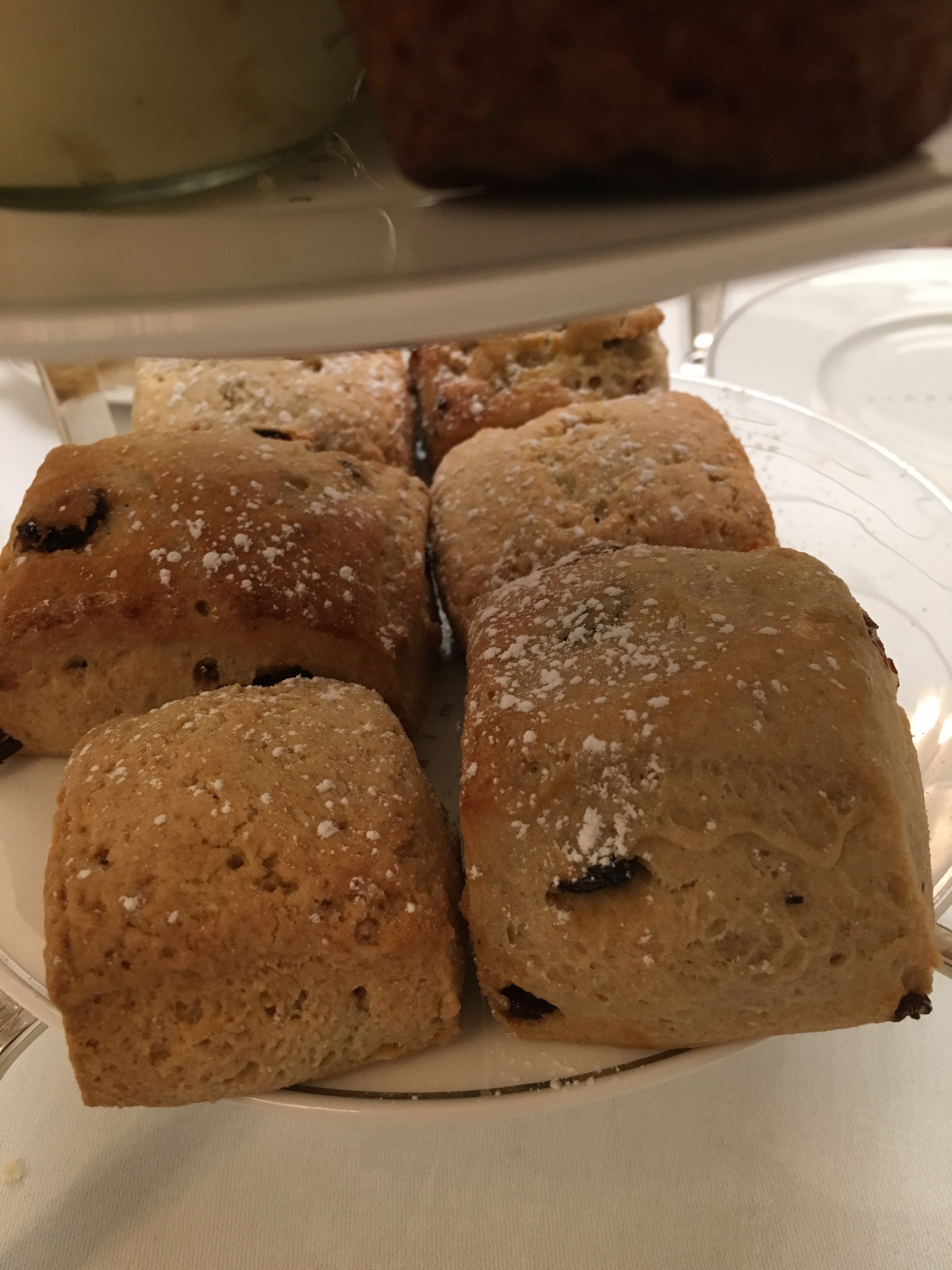 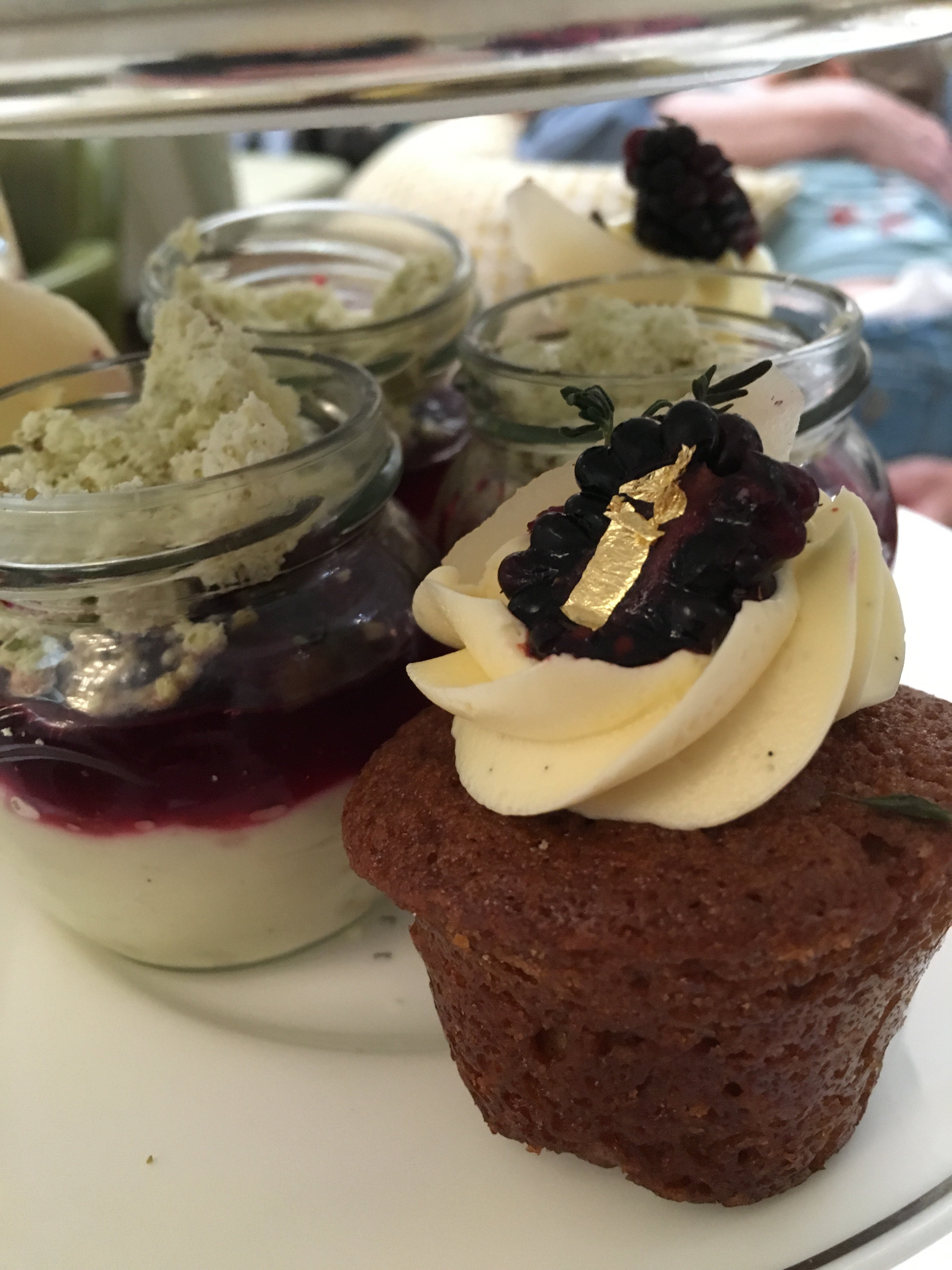 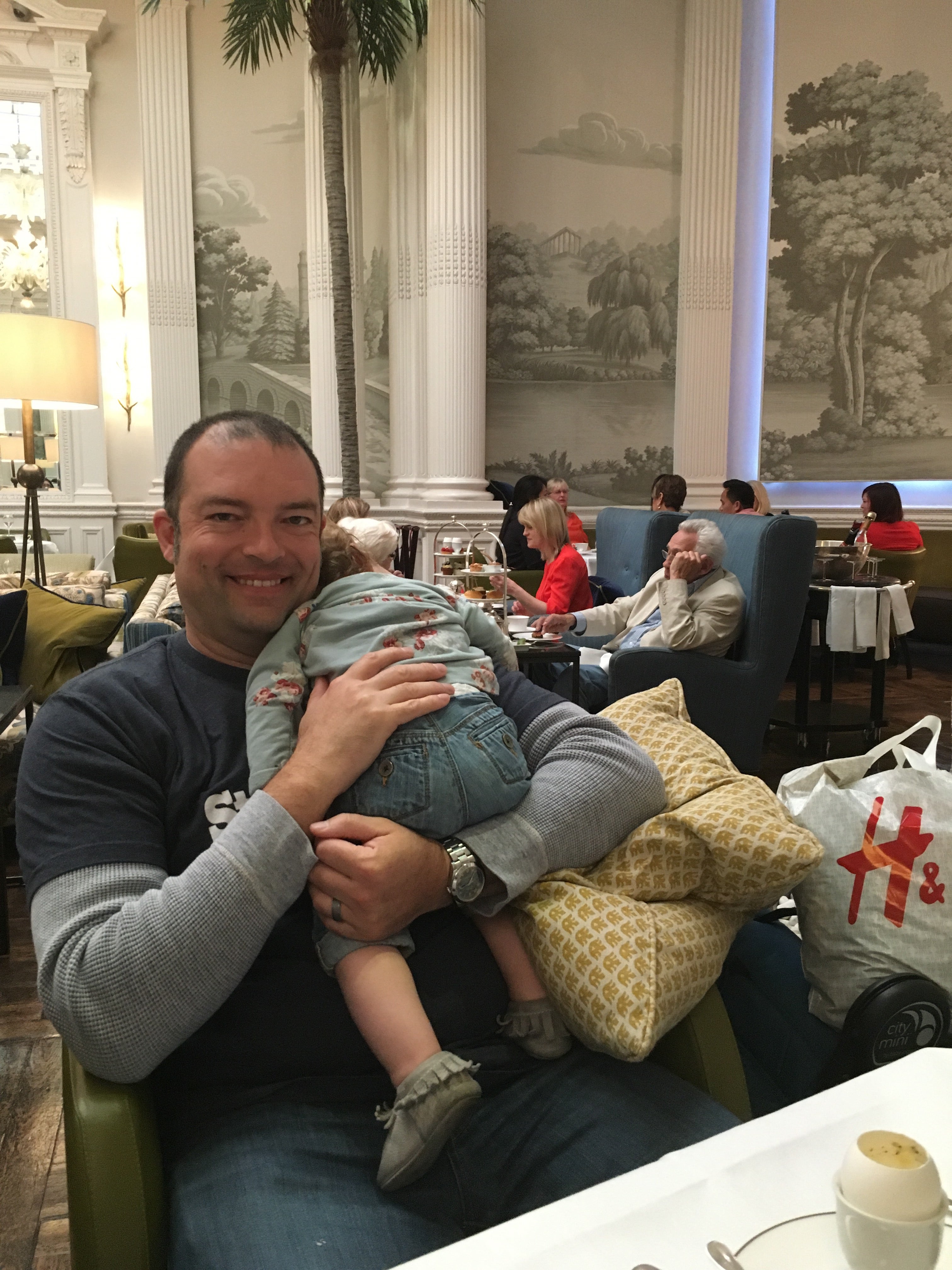 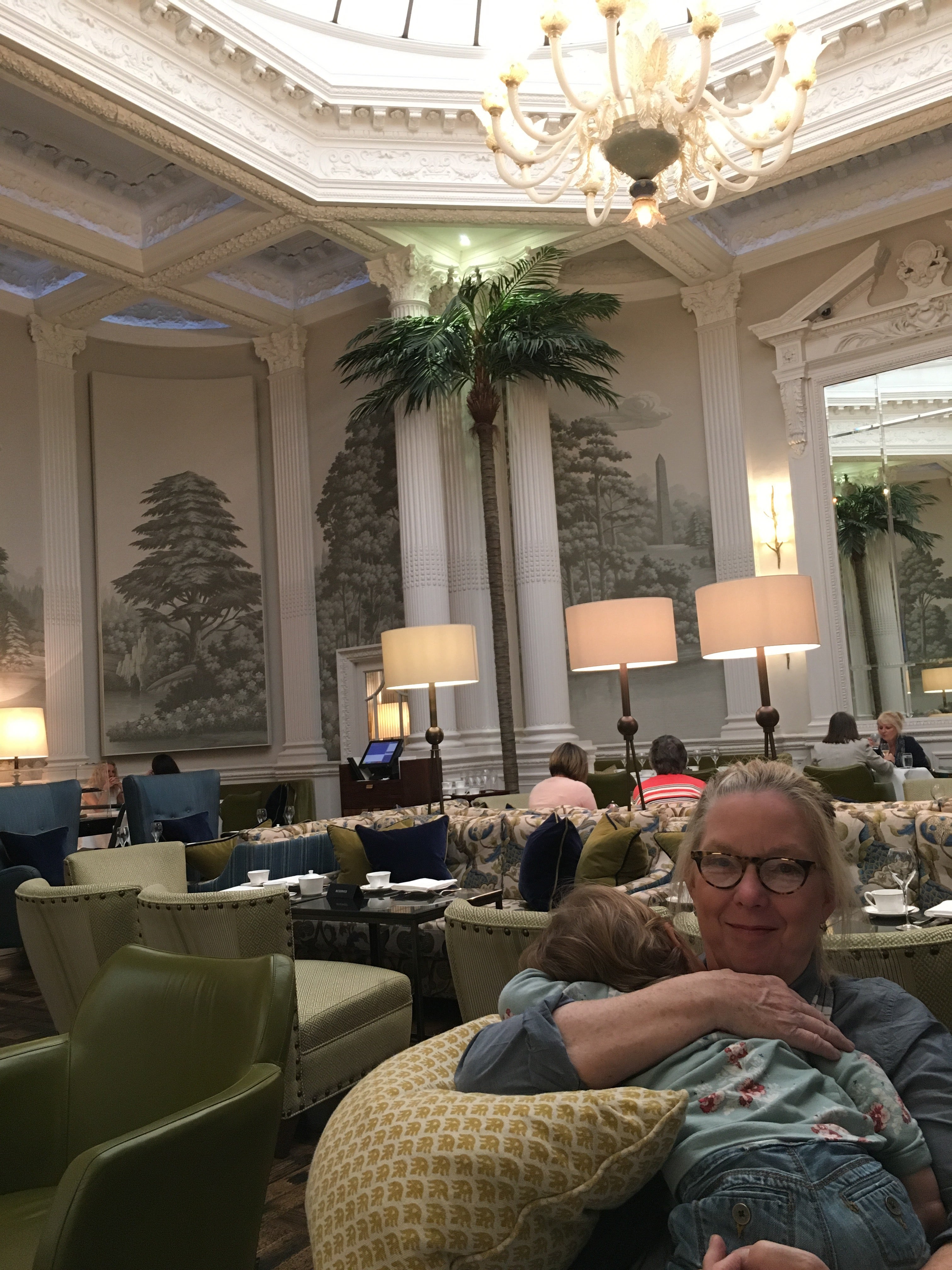 I think I give the slight edge to the afternoon tea at the Brown’s Hotel in London, but this was still quite good and certainly located in a beautiful setting. As an aside, Harry Potter fans should note that this is the hotel where JK Rowling finished her final Harry Potter book, The Deathly Hallow…and you can even book the suite she wrote in if you have a big travel budget!

Speaking of Harry Potter, JK Rowling wrote much of the first two Harry Potter books while in Edinburgh, and even while sitting at the Elephant House drinking coffee. There are entire Harry Potter themed tours in Edinburgh if you are so inclined. I’m not so nuts about Potter that I need a themed tour, but there is no way to be in Edinburgh and not feel like you are in a Harry Pottery book or movie as it is beyond obvious that much of the inspiration for the stories and settings was all around Rowling here as she wrote. 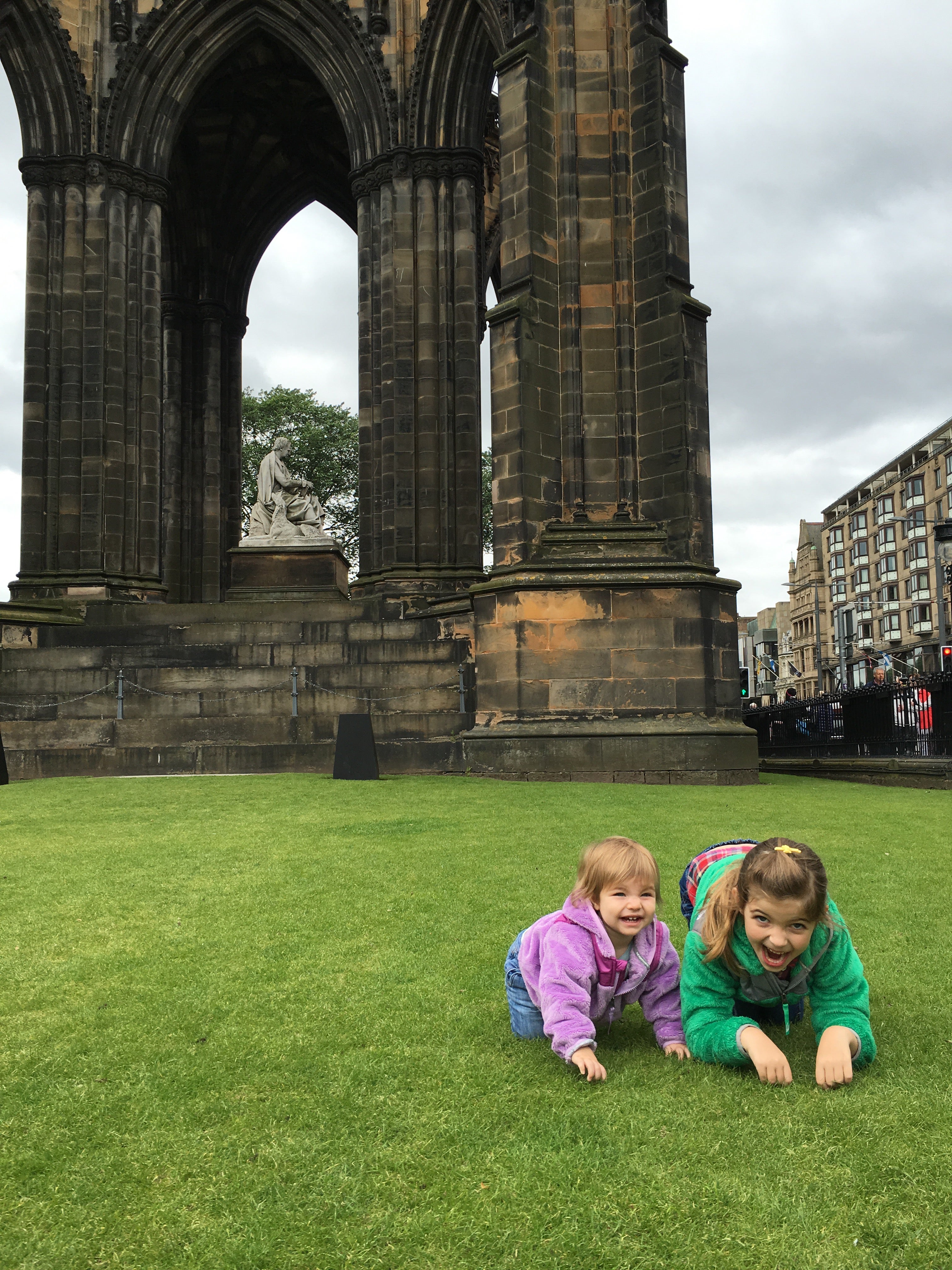 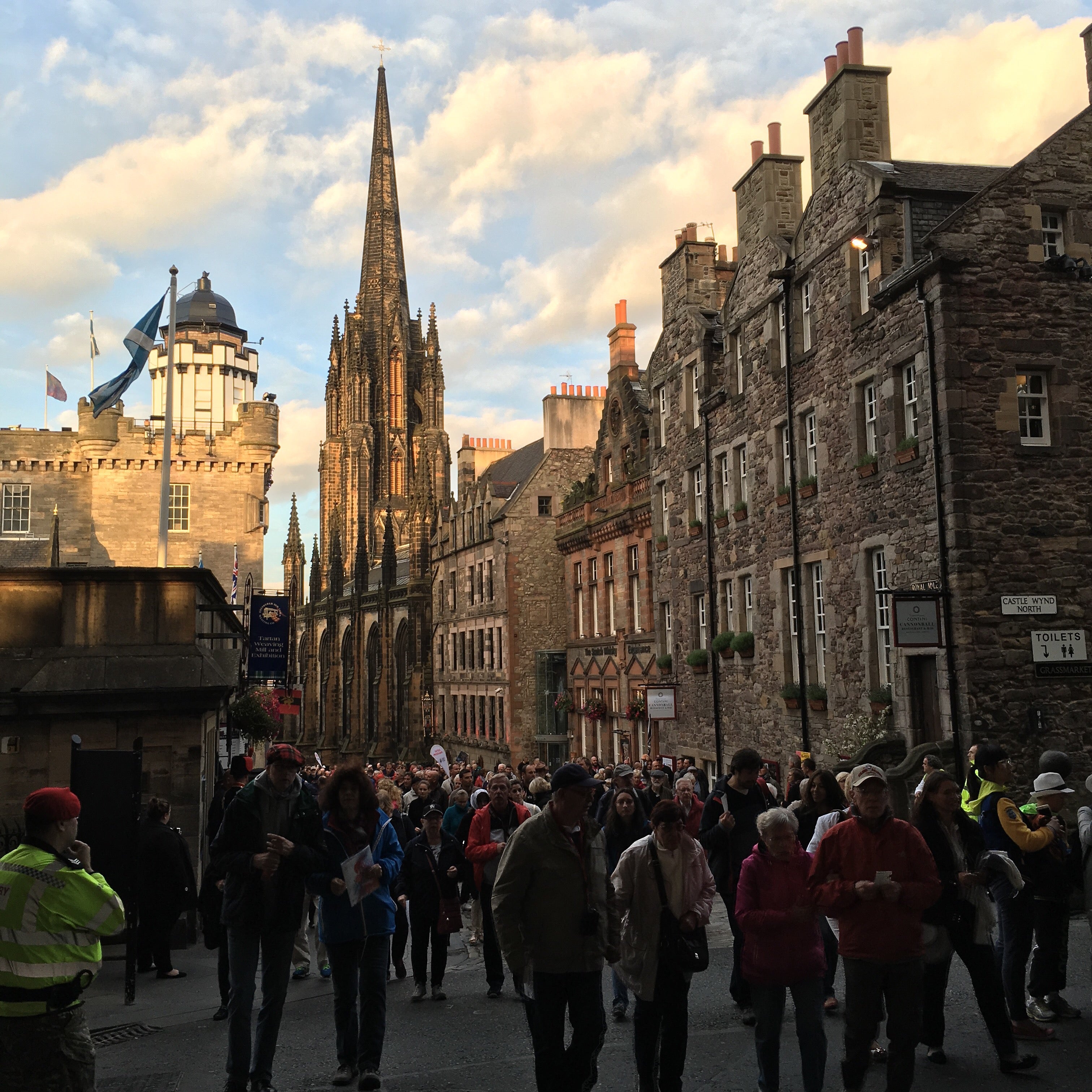 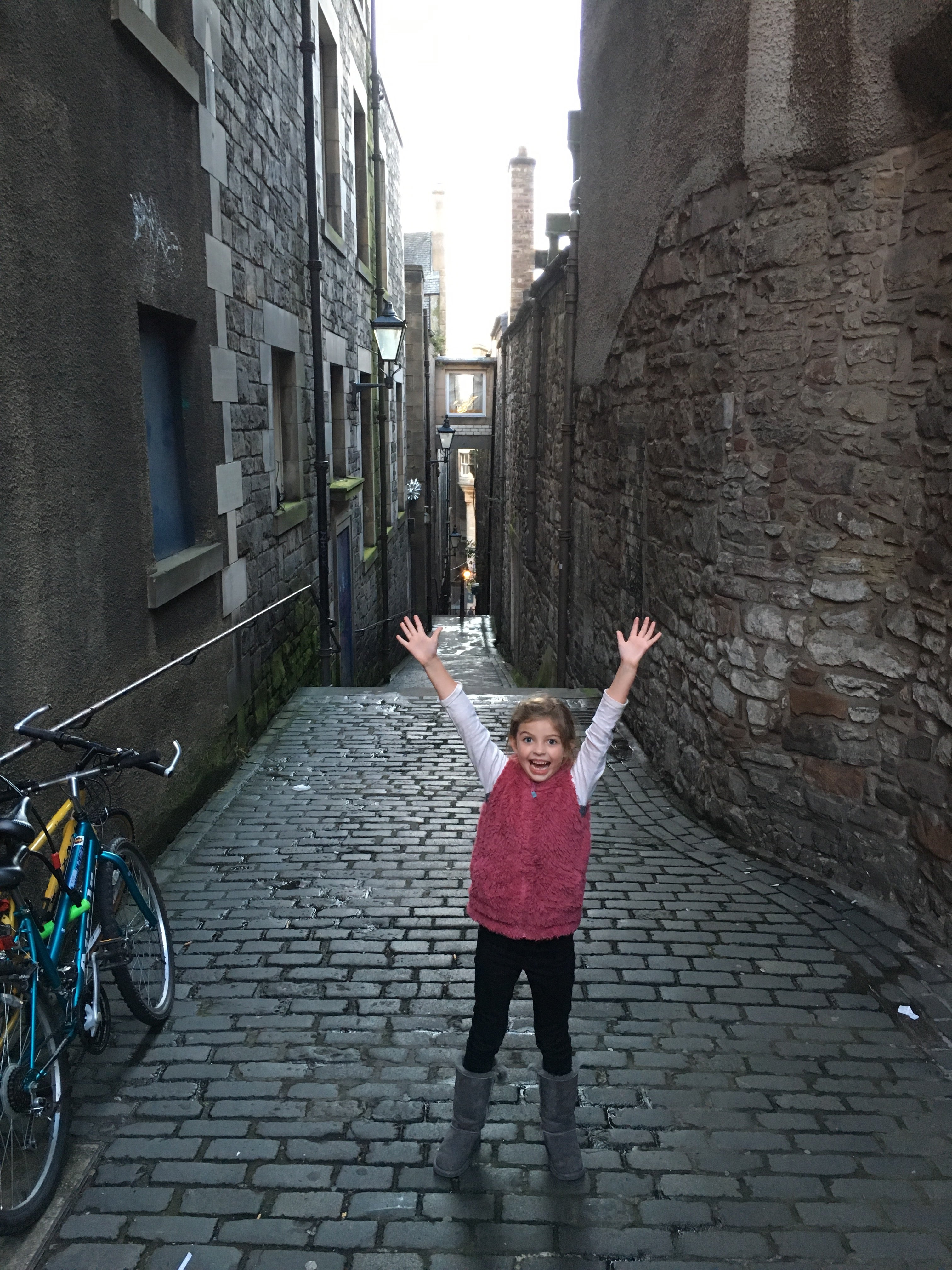 From the dark and winding alleys and staircases to the graveyards to the architecture it is real life Harry Potter World.

Enjoy Dinner in a Pub Atmosphere … With the Kids

Here in America bars and pubs are mostly relegated for the 21 and over crowd so parents often miss out, but in Edinburgh you can bring the whole family out for dinner. I’m sure many of these places get rowdier later in the night, but for a 6PM dinner we fit right in and all had a great time in a cozy pub enjoying fried fish, warm soup, and smooth whiskey drinks.

We visited the Whiski Bar and Restaurant right across from the Radisson Blu Hotel on the Royal Mile and even though it felt like a cozy pub, it was very family friendly with a kid’s menu with selections like fish and chips, Scottish steak burger, or chicken breasts for just £6.95. Our service was on the slow side, but otherwise it was a really fun introduction to Edinburgh on our first night.

The one thing my six year old wanted to do the most in Edinburgh was take a ghost tour as she kept seeing ads for them on the Royal Mile. I was skeptical because I thought she would get pretty scared, but she was so insistent that we took her on a walking free ghost tour on our last night. There are several different ghost tours in Edinburgh and some are free (where your fee is a tip) and some cost a few pounds up front. I recommend doing some research to see which one looks best to you if you are so inclined, but we just walked up to a free one C had picked on the Royal Mile and went with it.

I enjoyed walking around and learning some more about Edinburgh, and she enjoyed the first few stories and stops on the walking tour.

But, eventually, some of the stories started involving moms or children and she started to catch on that while some of these stories might be embellished a bit, that lots of them were rooted in true retellings of the darker periods of Edinburgh’s history. They weren’t all made up ghost stories so much as retelling of actual horrific events. She was wanting more of a “Disney’s Haunted Mansion” sort of ghost tour, and what she was getting actual real scary stories. At a certain point we walked left when the rest of the tour walked right and that was the end of that. So, this could be a good activity, but perhaps for slightly older kids than our six year old.

If you drink, you should certainly try some whiskey while in Edinburgh. We went to the admittedly touristy, but still interesting, Scottish Whiskey Experience on the Royal Mile. Our older daughter was on an adventure with Grandma during this time, but we strapped our baby on and went with her to our first whiskey tour.

There are several different tours available, but we did the entry level Silver Tour which included a 10 minute Disney style ride where you learn about the process of making whiskey, then learn a little more from a real person, then see a lovely golden room with the largest collection of Scottish whiskey in the world, followed at last by a tasting.

I did have to leave some parts of the tour early when the little one got a bit bored, but I still learned about whiskey from the various parts of Scotland, and loved the actual tasting. They have made the tour appropriate for children with an activity worksheet, a “Peat the Cat” trail to follow, and a Irn Bru soft drink tasting for those under 18. Children under 5 are free on this tour and they have discounts for kids and families. Of course you don’t have to go to the Scottish Whiskey Experience to experience Scottish whiskey as you can do this in pretty much every restaurant and bar in Scotland.

You obviously shouldn’t go to Edinburgh and not take the trek up the Royal Mile to the Edinburgh Castle. This is actually what my mom and oldest daughter did while the rest of us were on the whiskey tour. My husband and I got a private small group tour of the castle before the Edinburgh Military Tattoo performance (which is an absolute must do), but my mom and oldest daughter got the normal castle experience. 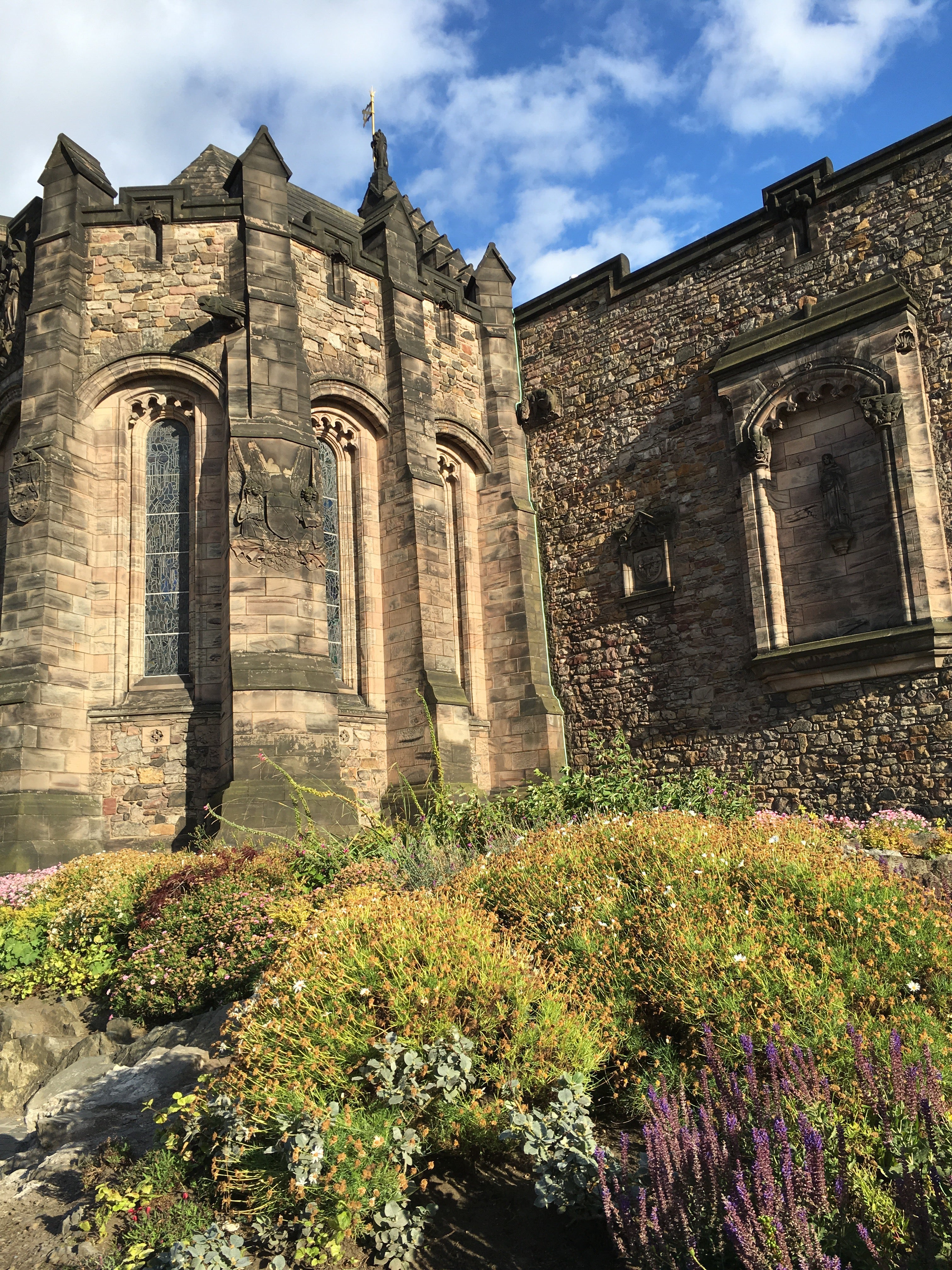 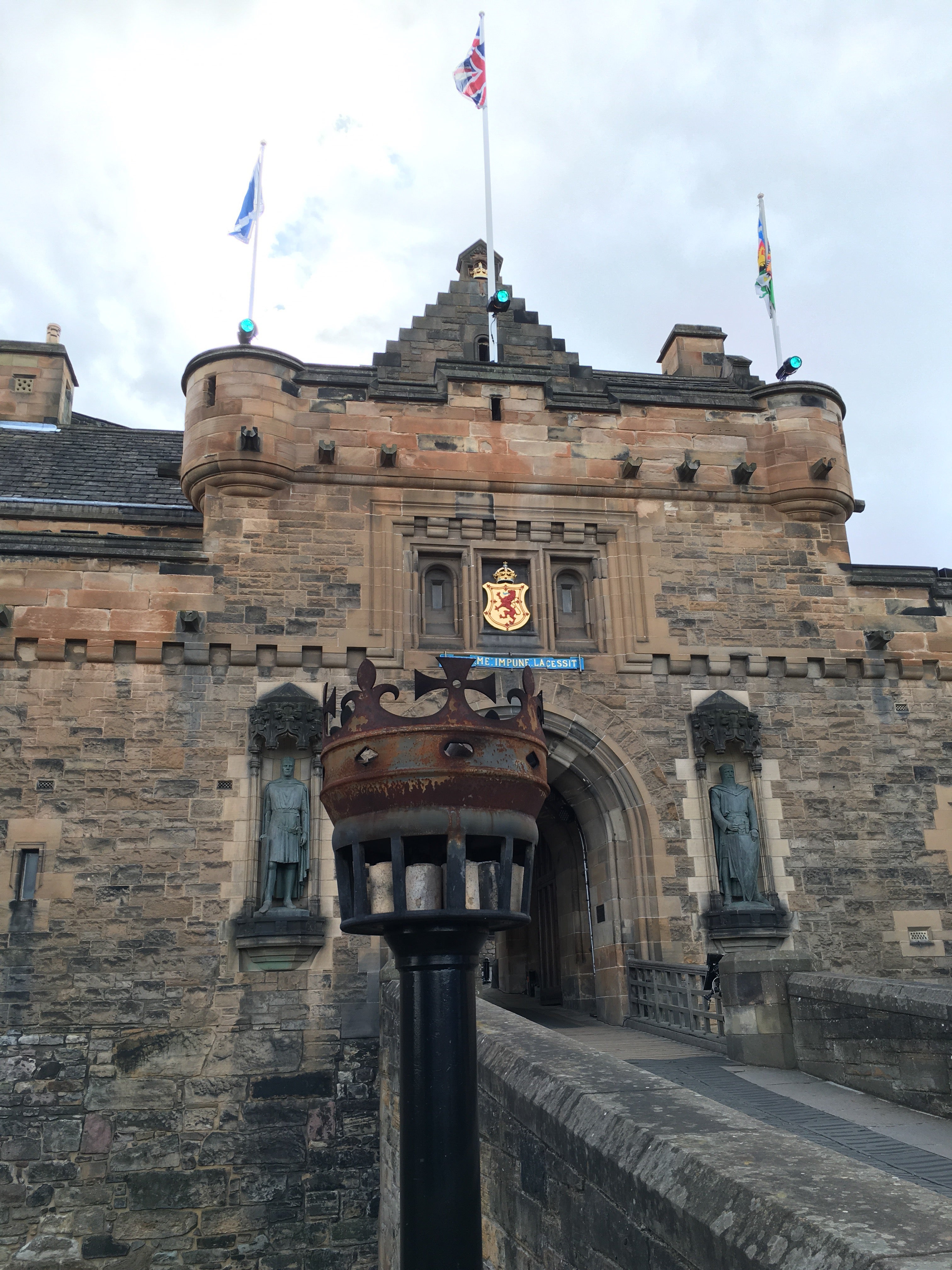 True to Edinburgh weather, it rained on them. And there were crowds. And they missed some rooms due to long waits. They still had a good time, but just plan accordingly as it is a popular and largely outdoor spot. 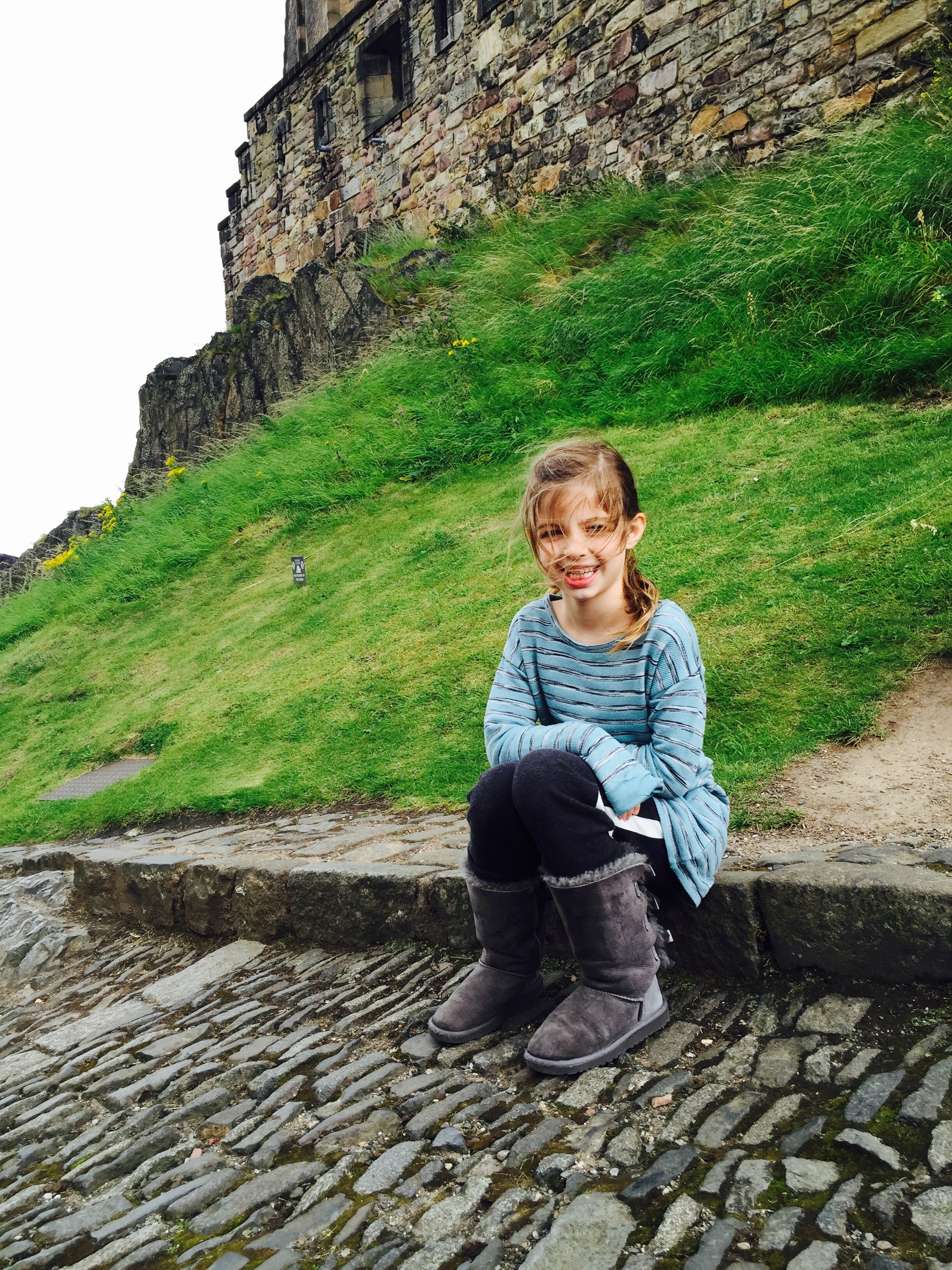 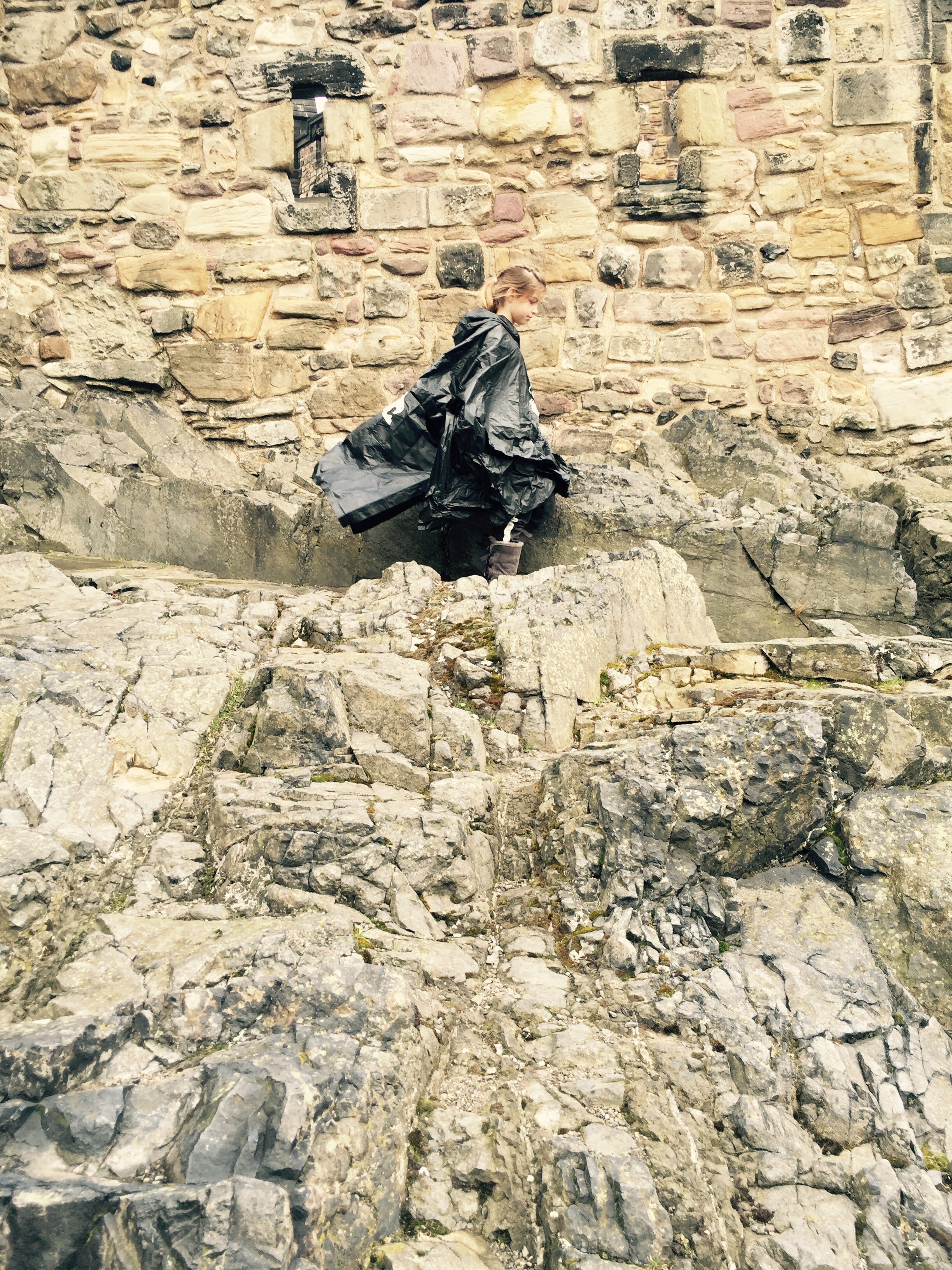 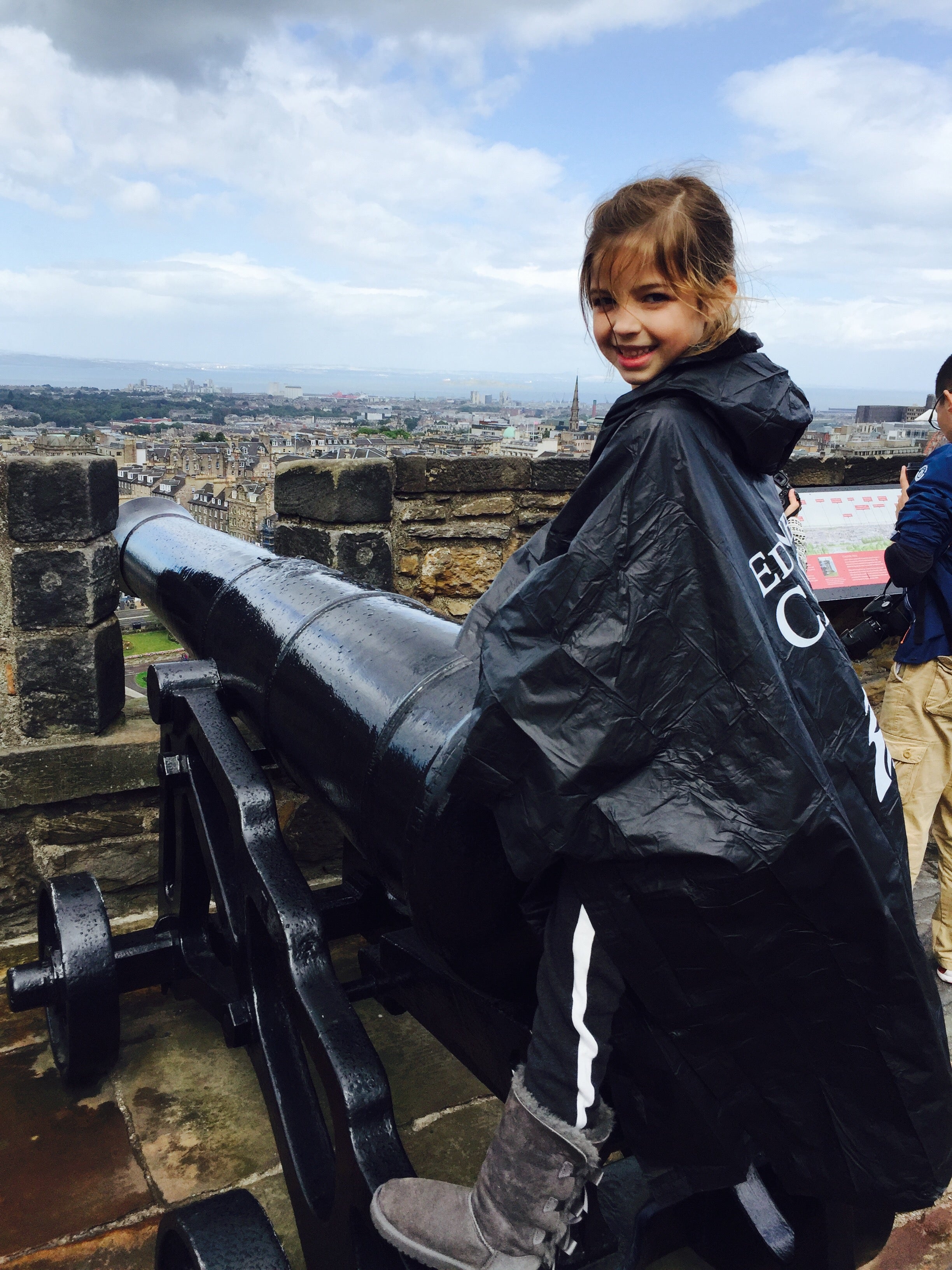 We didn’t have any of those problems on our private tour, so we were super fortunate without even knowing it at the time. Guided tours are included in the cost of admission to the castle, so I would recommend considering that option if you want to learn more about what you are seeing. Like any other tourist attraction you will also probably doing better going early or otherwise avoiding peak times.

I also do not recommend the castle visit with a stroller. You will do much better at the castle with the baby strapped to you thanks to stairs and cobblestones…in fact that is true for much of Edinburgh. 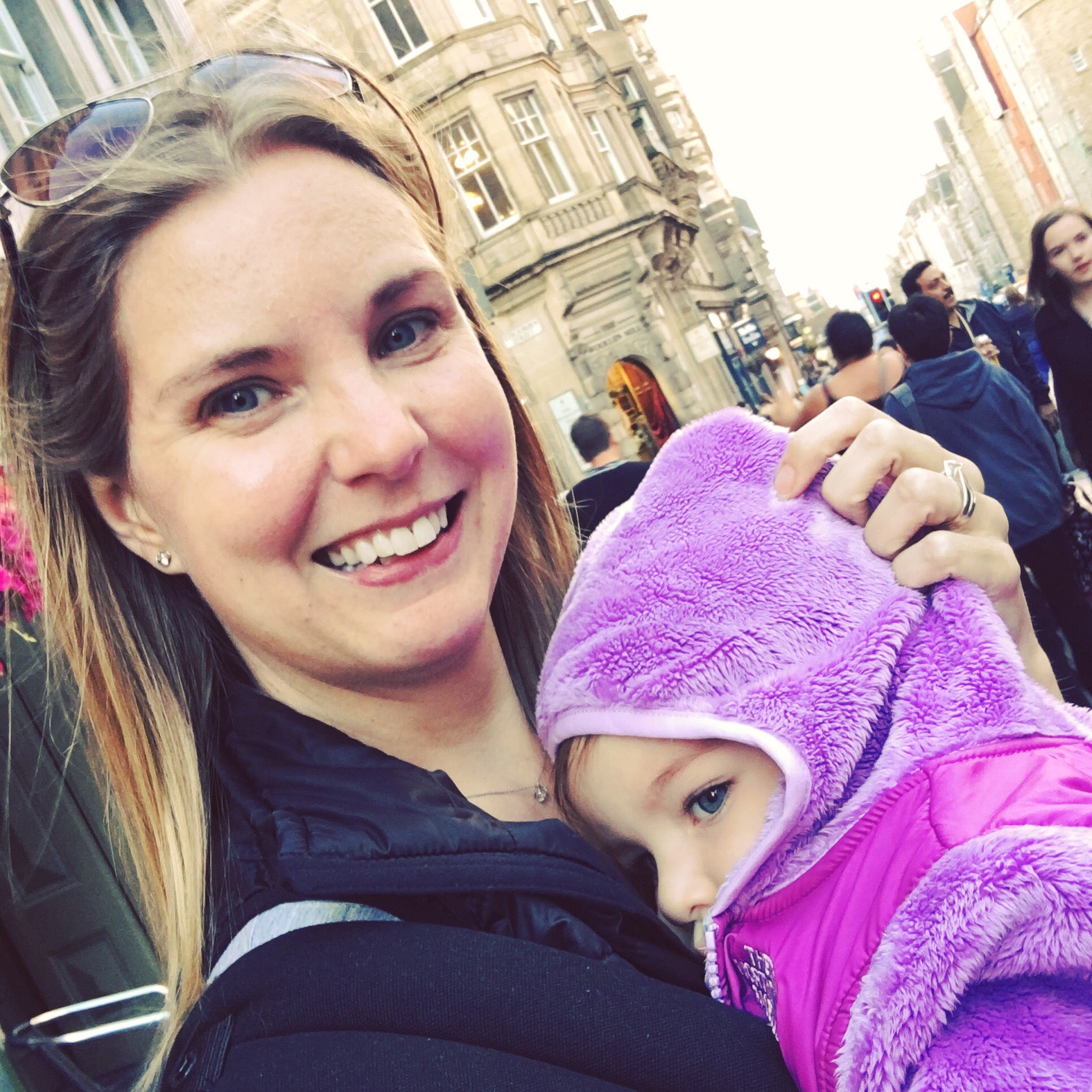 Our short time in Edinburgh was pretty magical and special. For those of us from the United States, it is the type of place that feels foreign and special, but is familiar enough to easily maneuver. We loved the food, the sights, the drinks, and (most of) the people – with the exception of the overly grumpy cab driver. We were there during festival season in August which was a plus and a minus as it made things much more crowded, but with a one year old, we couldn’t really take advantage of most of the festival offerings.

Edinburgh is the kind of city where you don’t have to overly plan your agenda in advance, and instead you can just meander around and see and experience lots of wonderful shops, sounds, and activities as they happen. We found it to be a very family friendly city without being overtly kid-centric. It had just enough of everything that we could enjoy most of the activities together.

If you have been to Edinburgh, I’d love to know which activities your family most enjoyed!

Sign up for our daily newsletter
Summer Hull aka Mommy Points, ran the Mommy Points site for families who want to travel more for less using miles and points for seven years and now heads up TPG Family when she isn't exploring the world with her own two girls.
You might like
Deal alert: $574 round trip to South Africa, Kenya, and Ethiopia on Qatar, Star Alliance airlines
Deals
2h ago
A service roller coaster: Review of SriLankan Airlines business class on the A330-300
Reviews
2h ago
TPG’s new-and-improved site search is here!
News
3h ago
Chase Sapphire Preferred® Card