Camp Mom and Dad: Extend Your Summer Vacation for Less than Day Camp

Articles
Dia Adams contributes to TPG Family, writes The Deal Mommy, and is the mom of a teen and a tween. Her passion lies in teaching families how to travel more while keeping their savings and sanity.
Follow
April 12, 2019
•
10 min read 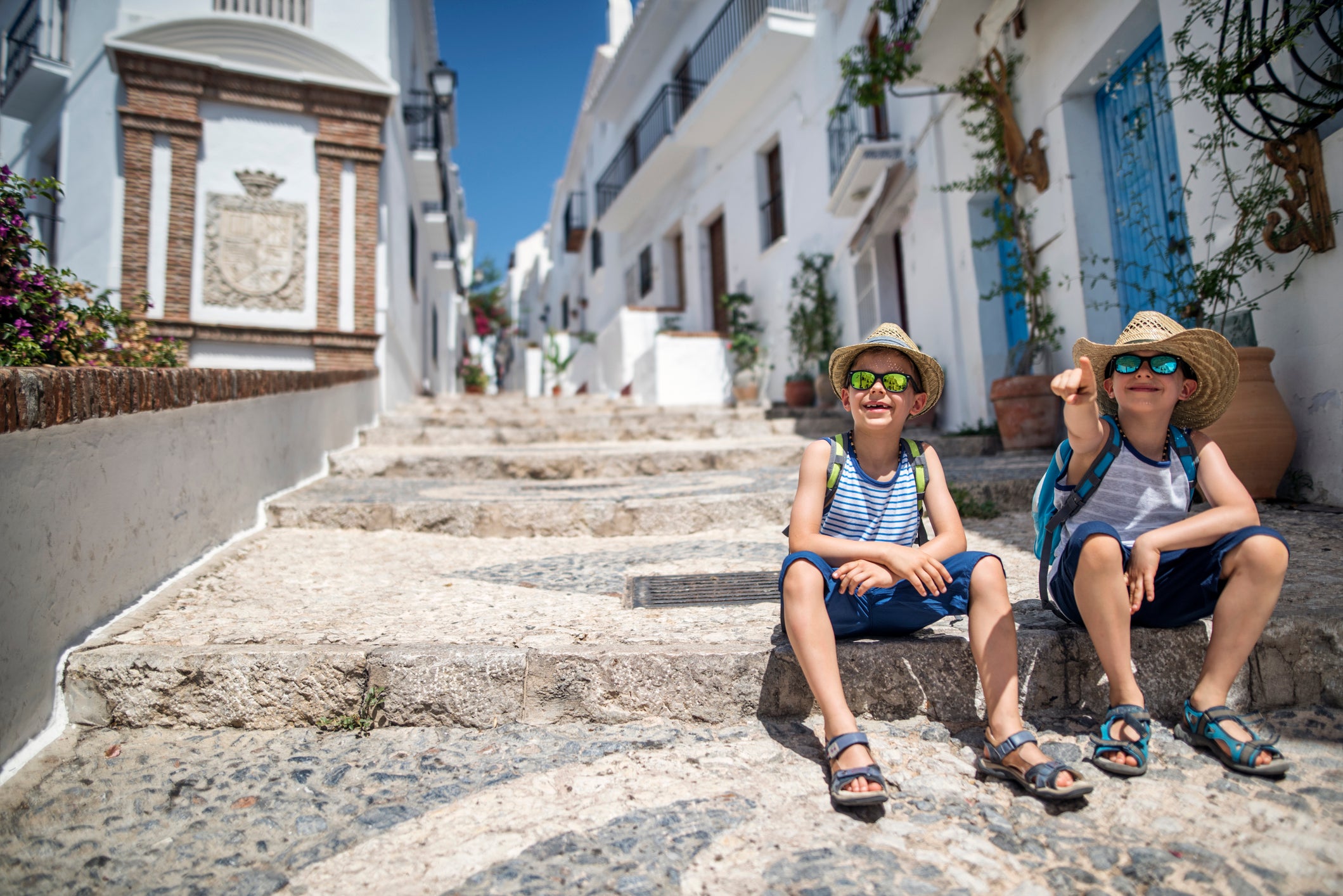 This summer I'm spending five weeks in Europe, mostly thanks to miles and points. The last three weeks will be just my 12-year-old daughter and me. We're taking what would normally be her summer camp budget and spending it on "Camp Mom."

Past Camp Moms have covered three continents and eight countries over nine weeks. We've explored deserts, jungles, historical sites and even commemorated a national holiday. Along the way, the kids learned lessons about both the world and themselves that no local camp could likely teach.

What Is Camp Mom?

Camp Mom (or Dad) is my plan to swap out day camp for extended family travel and make “what I did on my summer vacation” more impactful than what a day camp could likely provide. We tack Camp Mom onto our annual family trip. After two weeks, my husband goes home and the kids and I extend our travels.

Getting to and from a location is the same price no matter how long you stay, and by using miles and points, I can usually keep the cost of Camp Mom equal to or less than what camp would have cost.

In the DC Metro Area, a quality day camp can easily cost $400/week. With two kids, an $800 weekly budget is totally doable thanks to strategic rewards use. We've successfully completed three Camp Moms and I'm now planning the fourth.

I count lodging, internal transport and tours in my calculations. I don't count gas or food as those are expenses we also would have at home. It's an art, not a science, but using $400/week/kid gives me a budget goal.

The trip that was most subsidized by miles and points was a trip to Vietnam and Hong Kong that was tacked onto a family trip to Japan. We cashed in 130k American Airlines AAdvantage miles each to fly first class outbound to Tokyo and back from Hong Kong on a mix of American Airlines and Cathay Pacific operated flights. Leaving from Tokyo, used 20k American miles each to Danang, Vietnam, where we spent a week at the Hyatt Regency Danang. At the time, it was a Category 3 property that cost 12,000 points per night, but it's now a Category 4 at 15,000 points per night (so you can use a Category 1 - 4 award from the World of Hyatt Credit Card). That said, I think it's still a solid use of Hyatt points. From Danang, we were easily able to day trip into historic Hoi An.

From Danang, we spent 17,500 American AAdvantage miles each to fly Dragonair from Danang to Hong Kong. Our home in Hong Kong was the Hyatt Regency Tsim Sha Tsui, which at the time was a Category 4 at 15,000 points per night. It has since gone up to a Category 5 property at 20,000 points per night. I would recommend that Hyatt Tsim Sha Tsui, not only for the rooms but also for the most enormous afternoon tea buffet I've ever seen, held on the weekends. It must be seen to be believed.

Looking back, the only cash outlays I remember were cab fares in Danang, probably totaling $100, transport and tours in Hong Kong (about $100) and Hong Kong Disneyland tickets, which were just under $200. In other words, about a half-week of camp costs.

Our last successful Camp Mom occurred two years ago in Chile, but the cash outlays were much closer to the cost of camp. For our family trip, we spent two weeks in Argentina, Uruguay and Chile. The flights to and from Santiago were in Copa Business Class thanks to United MileagePlus Regional Premier Upgrade certificates. I booked the flights into economy for less than $400 each, so using confirmed upgrades on Copa was a terrific value.

Once my husband left us in Santiago, we spent three weeks traveling through Chile. Three weeks times $400/week times two kids = $2,400. As you will see, I spent well under that.

We spent three days at an Airbnb in Renaca, near Vina del Mar, that we loved so much we ended up adding on another week. Vina was just everything a beach town should be if you're a 13 or a 9 year old: clean, long promenades, beachside cafes and extensive playgrounds including a Ninja Warrior-type course in the sand. In July, which is technically offseason, the high was in the low 60s and the skies were sunny.

Our cost for the oceanside three-bedroom condo was $68/night. At that price, using points didn't make sense. I did book through Deltaairbnb.com to earn Delta SkyMiles for my rentals and I used my Chase Sapphire Reserve for both the 3x points earning on travel and insurance benefits. Our total for 10 nights = $680.

Our other two destinations, La Serena and San Pedro de Atacama, were also not points-friendly in a traditional sense. Our lodging, again booked via Airbnb, was $400 for a week in La Serena in a three-bedroom oceanfront condo. San Pedro de Atacama is expensive due to its remote location, so our housing there was $300 for three nights. Total: $700.

San Pedro de Atacama is a bucket list destination, but it is also "hard work." Our three days there were jam packed with hiking in both deserts and upon frozen Andes lakes, gazing at wild flamingos and sampling llama milk cheese.

La Serena is more of a locals' beach town, and after Atacama, the respite was much needed. We spent most of our time in La Serena playing cards, heading into the mountains for stargazing and eating dulce de leche stuffed churros at Lider, the Chilean version of Walmart.

Car rentals in Renaca and La Serena cost another $550. Due to Chile's mountainous terrain, I felt more comfortable with an automatic, which made driving more expensive. However, I did use Chase Ultimate Rewards points for our tours in San Pedro de Atacama, which saved me more than $300 out of pocket.

We used miles on American Airlines to fly from Renaca (via Santiago) to San Pedro de Atacama, from San Pedro de Atacama to La Serena, and from La Serena back to Santiago. The total for nine legs was only 54,000 AA miles, of which I got 10% returned thanks to our Barclaycard Aviator card (note: that benefit is going away May 1). American Airlines awards are a terrific value within Chile and within Argentina at only 6,000 miles per one-way ticket.

I'm currently planning our second Camp Mom in Europe for this upcoming summer. However, this year I'm only traveling with my daughter, so the cash budget I'm dealing with has dropped to $1,200. So far, I've been able to make it work.

Our family trip is to Spain and Portugal, ending in Faro. From Faro, we're flying to Paris for six nights. The flights are $150 total on Transavia (including seat assignments and luggage -- gotta love European low-cost airlines). Our nights in Paris are split, with two nights booked using 88k Radisson Rewards for Disneyland Paris, two nights using IHG uncapped free night certificates from the Chase IHG card (now capped at 40k) for the InterContinental Grand and two nights using 19k Ultimate Rewards points at an apartment hotel. I'm cheating a bit here on cost because we have Disneyland Paris annual passes in hand from our winter visit.

After Paris, we're flying to Sardinia, again on Transavia, for $408. This is, by far, the most expensive part of the trip but I found a jaw-dropping hotel deal on HIP Escapes, a European flash deal site: $132 euros ($148) for six nights in a boutique hotel normally costing 219 euros ($246) per night. At that price, who needs miles? I'll spend about another $150 on a rental car in Sardinia.

We're then leaving Sardinia and heading to Marseille via Nice on EasyJet, where our total transport cost was only $105. Our four nights in Marseille are thanks to the IHG Rewards Premier Credit Card, which I got specifically for this trip. The up to 120,000 bonus after spending $5,000 total in the first six months and fourth night free benefits were big draws. The InterContinental Marseille goes for 55k IHG Rewards Club points a night so I'll save $275 at current valuation just with the fourth night free benefit. From Marseille, we'll take a first class train for $150 to Barcelona. Our last two nights are at the Le Meridien Barcelona for 100k Bonvoy points. Whew! It took a while to get all the pieces to fit together, but the result should be worth the effort.

I get that Camp Mom isn't for everyone. For one, you've got to either have a flexible job, summers off or be a stay-at-home parent. You also need to have access to some amount of cash that you would have spent on camps or other activities for the kiddos. However, I encourage you to open your minds to how tacking on a Camp Mom or Dad to your trips could extend both your kids' minds and your travel budget.