Articles
Dia Adams contributes to TPG Family, writes The Deal Mommy, and is the mom of a teen and a tween. Her passion lies in teaching families how to travel more while keeping their savings and sanity.
Follow
March 07, 2019
•
11 min read 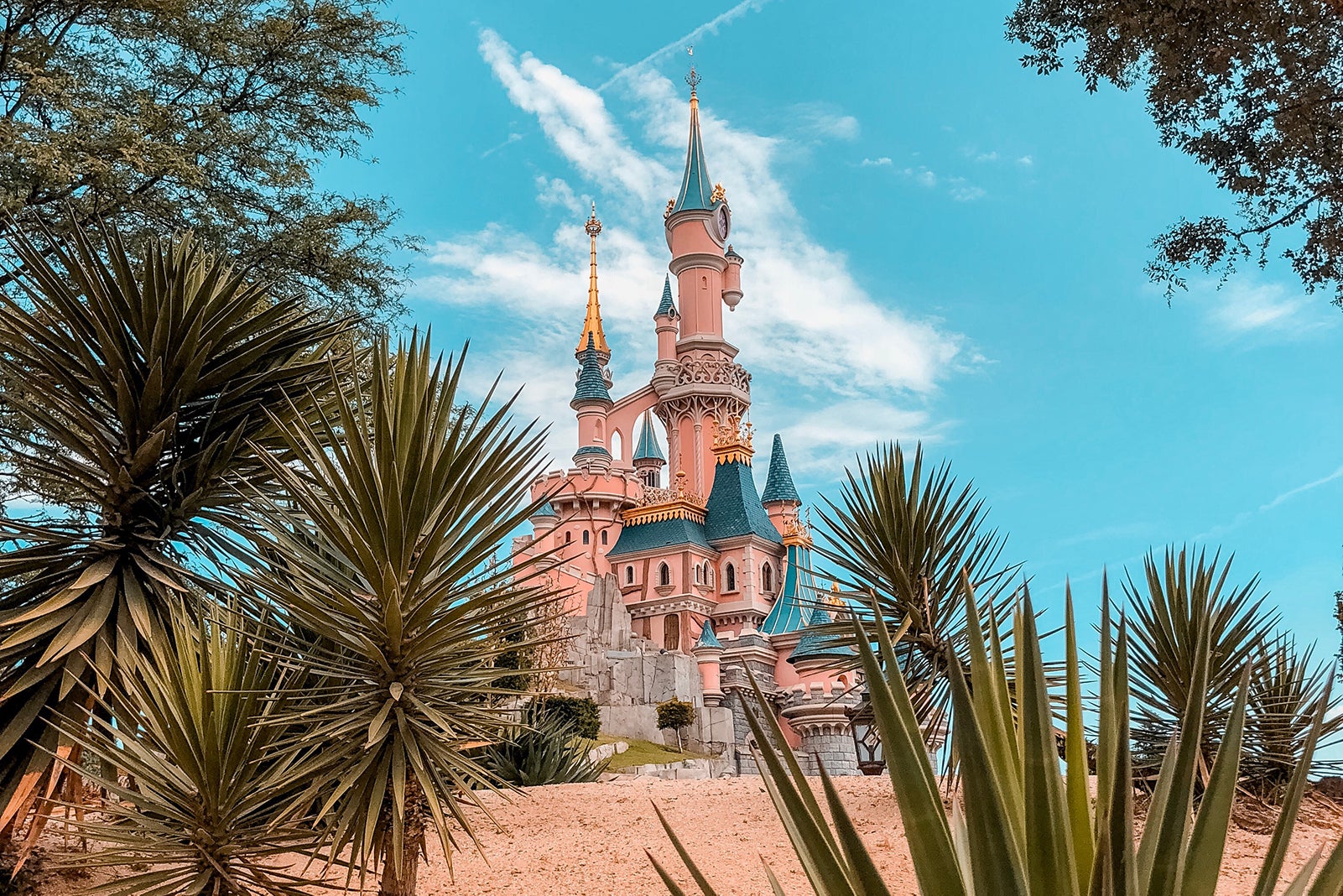 If you're taking the family to France, you might consider a visit to Disneyland Paris. As a Disney World guidebook writer and all-around Disney fanatic, a trip to Chez Mickey was high on my bucket list. Now that I'm back, I'm happy to share what a first-time visitor to Disneyland Paris needs to know.

Disneyland Paris Is Cheaper Than US Disney, But...

How much cheaper varies by when you go. Depending on the day you visit, one day/one park tickets can go as low as $63/day. Even peak tickets will run you $101. By comparison, tickets at Disney World start at $109 and go up to $129 on peak days.

Here's the big "but": Disneyland's FastPass system can be outrageously expensive. Disneyland Paris follows the Universal Studios model where you buy a separate FastPass that allows you a varying number of entries based on how much you pay. The bare-bones, one-time-per-ride (and not every ride) model runs $58 and it goes all the way up to $192 for just a single day.

All is not lost, though. Disneyland Paris also has the old-school, paper FastPass system. As long as you are on your game and get those FastPasses early, you can still ride everything you want to ride without spending a lot of extra money to cut the lines.

Unlike US Disney tickets, Disneyland Paris tickets are actually available through the Chase Ultimate Rewards portal with transportation from Paris. However, it is not always a good value if you're only doing one park and it's offseason. I see prices at $123 (8,200 UR if you use your Chase Sapphire Reserve points). The train ride is normally less than $10 and park tickets are as low as $63. However, if you're doing a Park Hopper and peak season, it isn't a bad deal as the Chase portal charges the same price year-round. Like in the US, the park tickets coded as entertainment, not travel, for category bonus purposes.

It's Well Loved by Locals

In this way, Disneyland Paris reminds me of Disneyland in California. This means you're well served to schedule your visit for a weekday to avoid crowds. The difference between our Saturday visit and our Tuesday visit was stark. Granted, weather was partly to blame, but it's still a solid strategy to visit Disneyland Paris on Monday–Friday, if you have the option. While the park may draw lots of locals, English is spoken everywhere and much of the staff during our visit was actually British.

It's Really Easy to Get to from Paris, But Takes an Hour

Transportation to and from Disneyland Paris is top-notch, with the RER/TGV train station stopping right at the park gates. However, if you're paying (or hoping to avoid) Paris hotel prices, it might be worth it for you to stay closer to Disneyland Paris for a night. Not only could it be cheaper, you'll be grateful not to have the long train ride back to the city after a full Disney day. If you stay at one of the six Disneyland Paris hotels, you can get into the parks an hour earlier than the general public.

As at Hollywood Studios in Florida, Walt Disney Studios has the Tower of Terror (officially called the Twilight Zone Tower of Terror), Rock 'n' Roller Coaster and even a version of the old "Lights, Camera, Action" stunt show.

Walt Disney Studios also has a Toy Story Playland, but the attractions pale in comparison to those at Disney World. In fact, it feels like Disney bought the Toy Story Playland rides from a roadside carnival and put on a colorful coat of paint.

There are two attractions that are distinctive for stateside visitors: Crush's Coaster, which is an indoor roller coaster based on "Finding Nemo," and Ratatouille: The Adventure, which is a trackless 3D journey through Remy's kitchen. "Ratatouille" is on its way to Epcot, so it was fun to get a preview. For that reason, more passionate Disney fans might want to plan a visit to Walt Disney Studios. However, I'd go with a Park Hopper because I don't see spending all day there.

It's Not Disneyland or the Magic Kingdom

Parc Disneyland is more like someone turned the Magic Kingdom up to 11. For instance, Phantom Manor, which looks a little like the Haunted Mansion, is more intense and darker than the hitchhiking ghosts you might be used to in Florida. Sleeping Beauty Castle can not only be toured, you can visit Maleficent locked up in the basement. Big Thunder Mountain is almost twice as long as in the US and even "It's a Small World" has a North American section that charmed all ages. And wait until I tell you about Space Mountain. (There's a reason it is on TPG's list of best Disney rides around the world.)

The Food is Not Magical

This one surprised me, as French food usually equates to great food. Disney food (if you know where to look) is also great. Therefore, I thought Disneyland Paris food would be great. Not so much. The snacks and meals we tried over four days ranged from “meh” to downright inedible, and they were expensive both for Paris and for a theme park.

The theme at most Disneyland Paris restaurants is "American." However, their interpretation of American is school cafeteria-level hamburgers, soggy fries and ketchup-tinged barbecue. It was sad to see the USA's varied cuisine showcased in such a sorry state. We only found one outlet in each park worth visiting again.

In Parc Disneyland I'd suggest (using the term loosely) Au Chalet de la Marionnette, a Pinocchio-themed quick service outlet. For 20 euros ($22) my daughter and I shared a fatty ham hock (pork knuckle), three mozzarella sticks, a fruit cup, a green salad and a bottle of water. The standouts were the fresh fruits and veggies.

In Walt Disney Studios, I'd head for the red food carts near the "Ratatouille" ride. There, we found a selection of basic, but reasonably tasty, French fast food: crepes, cheeses, soups, etc. At 7 euros ($10) my buckwheat crepe with ham, Brie, honey, arugula and walnuts wasn't a bargain, but it didn't feel like a rip-off, either.

“Rip-off” is the word that comes to mind when I review our experience at Bistrot Chez Rémy, the signature restaurant in Walt Disney Studios. While the theming — giant everything as if you're shrunk to rat size — is adorable, the only options are a set menu starting at 33 euros ($40) for adults and 19 euros ($21) for kids ages 3 to 11. While my daughter did enjoy her cod fillet and mashed potatoes, most of my tough and stringy skirt steak was left on the plate. With wine, our check was over 70 euros ($80), which cost more than every meal that we actually enjoyed in downtown Paris.

Disney lovers are passionate about their Disney treats, be they churros or Dole Whip. Everywhere you look, there's an adorable Mickey-adorned snack at the USA parks. However, at Disneyland Paris we had to look far and wide to find anything that wasn't packaged and shipped from Florida. We finally found a stale Mickey-shaped meringue, half of which ended up in the trash can. There were adorable Yoda pistachio cookies at Walt Disney Studios, but they were there only for the park's "Legends of the Force" festival.

In Disneyland Paris, the Force is split between the two parks, unlike other Disney Parks where Star Wars attractions are centralized. Parc Disneyland holds the Star Tours attraction and a character meet and greet, while Walt Disney Studios hosts both the live action shows and the evening "Galactic Spectacular." In other words, if you have a Star Wars fan in your midst, you can get away with only visiting Parc Disneyland without them feeling deprived.

I almost forgot to mention the best part: Star Wars Hyperspace Mountain. Let me rephrase for emphasis: upside-down Star Wars Space Mountain. One-of-a-kind in the world, the Parc Disneyland version of Disney's iconic roller coaster shoots you straight into a battle where you corkscrew-dodge TIE fighters and laser beams. It simply must be experienced to be believed. All other Space Mountains will seem vanilla to me from now on.

Park hours are significantly shorter in winter, with most days running from 10am to 6:30pm. Even within those limited hours, a number of attractions close early. We tried to ride Tower of Terror at Walt Disney Studios at 5pm and were turned away. Adding to the negatives: refurbishments. During our visit, Phantom Manor and Crush’s Coaster, two A-list attractions, were closed. Plan around a month or so in advance by checking the refurbishment calendar.

Even a casual Disney fan will enjoy Disneyland Paris, but you shouldn't expect an exact copy of any other Disney park. The rides are more thrilling, the castle is more colorful and the experience is all-around fantastic ... as long as you don't expect gourmet cuisine or adorably Instagrammable Disney treats.

Featured image by Disneyland Paris (Photo by Nicola Ricca/Unsplash)
Editorial disclaimer: Opinions expressed here are the author’s alone, not those of any bank, credit card issuer, airline or hotel chain, and have not been reviewed, approved or otherwise endorsed by any of these entities.