8 hot cruises you'll need to book at least 1 year in advance – maybe even 2!

Articles
Fran Golden is an award-winning cruise journalist whose work regularly appears in Bloomberg, Travel + Leisure, Afar and other travel outlets. She is the author of several cruise and travel books, including “100 Things To Do In Alaska Before You Die." Fran lives in Cleveland, Ohio. Although fond of lake Erie, her first love is the sea.
Sept. 04, 2022
•
8 min read 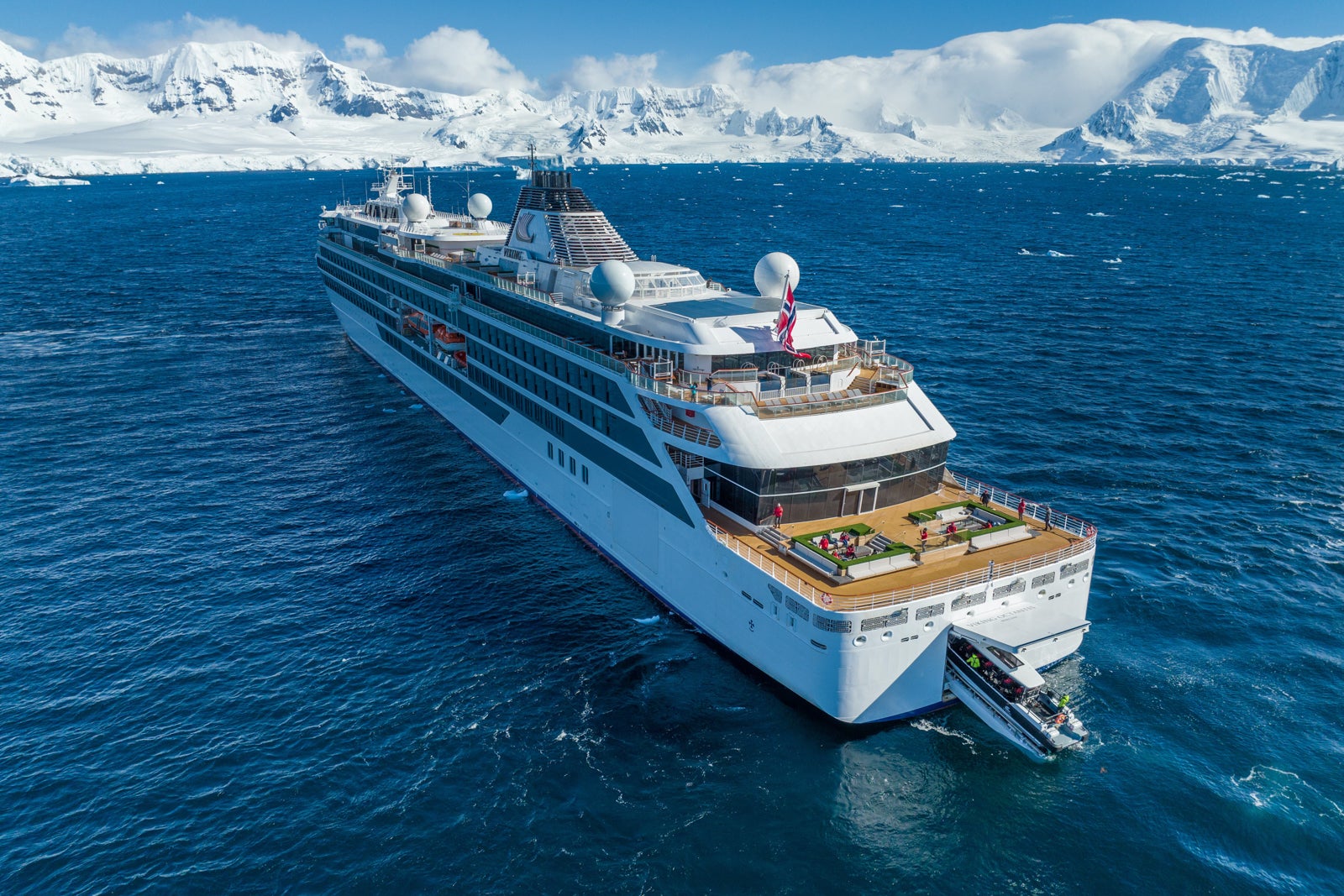 You may think that with all the cruise ships out there — many carrying thousands of passengers — you have all the time in the world to book your cruise. The reality is that some itineraries, and certain cabin categories on many sailings, sell out a year or more before the ship leaves the pier.

Don’t get left behind on dry land when you could be relaxing at sea. If you’re interested in the following cruises, you’ll need to plan a year or more in advance.

Even before COVID-19, world cruises were a hot seller, so much so that fans carefully checked emails, newsletters and social media, and checked in with their travel agents so they would know exactly when their favorite cruise line was putting out its latest multi-month itinerary, often years in advance. The plan: Book immediately to ensure you get your preferred cabin category.

Pent-up demand to see the world has increased the stakes. Lines such as Viking, Regent Seven Seas Cruises and Oceania Cruises, for instance, are reporting world cruises selling out in days, hours — even minutes.

“Sometimes the cruises sell out even before they are publicly announced,” says Rob Clappers, president of Q Cruise & Travel in Chicago.

If you are targeting a vacation in a destination that does not have a year-round cruising season, such as Antarctica or the Arctic, you will want to make your reservation a year in advance. New expedition ships are sailing in both markets, but they carry no more than 500 passengers. (Ships with more passengers are not allowed to make landings in Antarctica.) Well-established operators such as Abercrombie & Kent, which charters ships from Ponant, sell out Antarctica cruises a year or more in advance.

Other popular seasonal itineraries also fit into the must-book-a-year-in-advance category.

“If you wanted to circumnavigate Iceland, especially on small ships such as Windstar, you better plan well in advance as there are not that many sailings,” says Clabbers. The same is true if you have on your bucket list such places as the Northeast Passage or Northwest Passage, where sailings are limited.

Alaska is another market where it pays to check itineraries as soon as they are announced, especially if you want to explore more remote ports on a small ship or want to stay in a suite.

On any cruise, the fanciest suites tend to sell out quickly because they are highly desired and limited in number. They also come with a bevy of attractive perks.

On select ships of Norwegian Cruise Line, for instance, guests in The Haven suite complex have access to a private lounge, pool, sundeck and restaurant. MSC Cruises’ MSC Yacht Club is a similar concept. Select Royal Caribbean ships have an exclusive suites-only restaurant and lounge, with Royal Genies (personal butlers) tending to the needs of those in its Royal Suite class and the fanciest accommodations.

You will need to book a year in advance, too, if you want to stay in a suite on a river ship with lines such as Uniworld, AmaWaterways and Viking, as these accommodations are limited yet highly sought after on the small vessels, Clabber says.

If you are looking to cruise very high-end, book far in advance.

When a ship is repositioning or otherwise doing an interesting one-off itinerary, demand can be huge. This might be the case, for instance, when a ship is moving from Australia to Indonesia or from Tahiti to Australia, with stops in the South Pacific.

“Some transatlantic repositioning cruises the lines can’t sell for the life of them, which is why they are often so inexpensive,” says Clabbers. “But other ones, especially on smaller ships and to destinations that are unique, it’s a different story. They sell out well in advance.”

Holiday and New Year’s sailings tend to be in high demand, and holiday-themed sailings such as Disney Cruise Line’s Very Merrytime cruises are particularly popular. You’ll want to keep this in mind and plan well in advance, especially if you are looking to celebrate the holidays with your extended family and require several cabins.

“What comes into play on holiday cruises is that children are off school, and so now you are talking about a multi-generational group going on a trip,” says Clabbers. “If you want to have a suite for the grandparents and a couple of nice rooms or suites close by for the children and grandchildren, those may be in limited supply.”

Fans of specific cruise lines get very excited when a new ship comes out and will book the inaugural sailing and other early sailings a year or more in advance. This is the case, for instance, with lines such as Disney Cruise Line (with the new Disney Wish and its two sister ships debuting in 2024 and 2025) and Cunard Line (with the Queen Anne arriving in 2024), as these lines don’t often bring out new ships.

If a ship can brag of being the world’s largest (Royal Caribbean’s 5,200-passenger Wonder of the Seas) or the world’s most luxurious (Regent Seven Seas Cruises’ upcoming 750-passenger Seven Seas Grandeur), it is bound to attract an enthusiastic crowd and sell out far in advance.

When a ship moves to a new destination that the line has not visited before, whether Hawaii or Norway or elsewhere around the world, expect a surge in interest and early bookings. This is also the case when a cruise line expands its market, such as Viking (known for ocean and river sailings) launching expedition cruises.

Book a year in advance if you are looking for a cruise tied to a once-a-year event; these cruises are hot tickets. Examples include cherry blossom season in Japan, the Monaco Grand Prix, the Cannes Film Festival and Carnival in Rio.

Cruises commemorating significant events also sell out quickly — something to keep in mind for the 80th anniversary of D-Day in 2024.

The same planning in advance applies to popular theme cruises, which tend to sell out with previous guests taking the majority of cabins. These include the annual KISS Kruise and Outlaw County Cruise, both featuring live music and enthusiastic fans. Sign up for notices that will let you know when bookings open and get on the waitlist as early as you can.

Assistance dogs aside, there is only one option for sailing with your pet dog (or cat) and that’s a transatlantic cruise on Cunard’s Queen Mary 2. While you indulge in afternoon tea and attend dress-up affairs in fancy ballrooms, your pet is pampered in a posh kennel. Space is very limited.

“If you are interested in taking your dog across the pond on Queen Mary 2, the kennels sell out a year or more in advance, and within a couple days [of] when the new itineraries come out,” says Clabbers. “In this case it’s about the puppy not getting space rather than the human passenger.”

Related stories
Legislation that could gut credit card rewards set to move through Congress
Would you stay at 1 of these 8 haunted hotels this Halloween?
Southwest winter flash sale: Get one-way flights for as low as $29
You can currently buy points and miles with up to a 100% bonus — but should you?
Featured image by Dennis Schmelz
Editorial disclaimer: Opinions expressed here are the author’s alone, not those of any bank, credit card issuer, airline or hotel chain, and have not been reviewed, approved or otherwise endorsed by any of these entities.