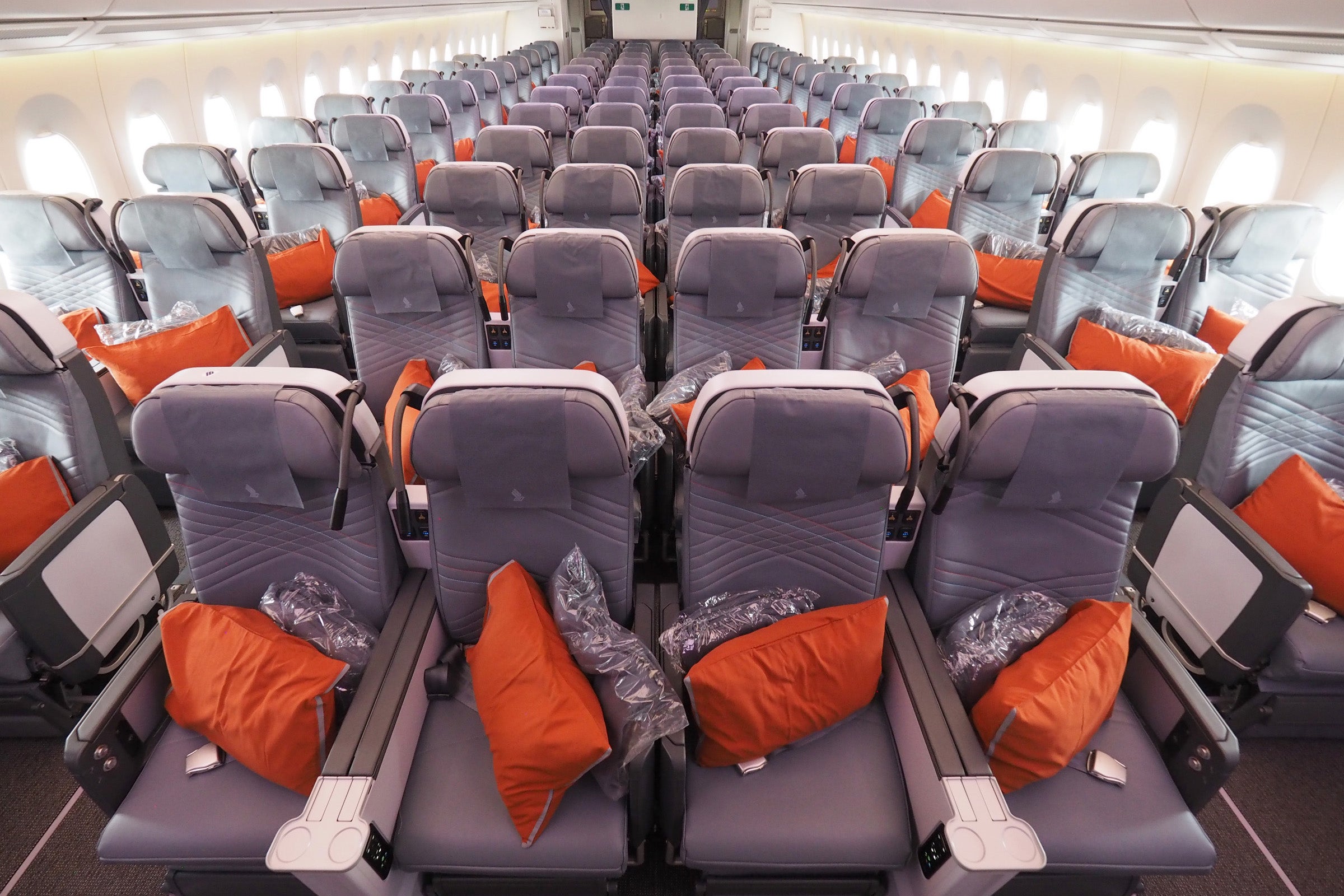 Last week, Singapore Airlines relaunched the world's longest flight between Singapore (SIN) and Newark (EWR) — after a five-year hiatus. Never one to miss a historic flight, TPG was on board flying both premium economy from Singapore-Newark and business class from Newark-Singapore.

If you're looking to book this epic journey yourself, you might be interested in how to make it as pleasant as possible, and seat choice certainly affects how comfortable the journey will be. We've already shared tips on snagging the best business class seat for this flight. But, if you're going to be in the rear cabin — which is marketed as premium economy but fell short of my expectations — let's discuss where you'll want to sit.

That's a lot of seats in one cabin — and it means mostly-identical seat options with just a handful of bulkhead seats. But, there are some details that I learned on board that can help you get the best seat.

When you take a look at the seat map, there are some obviously good seats: the one-seat rows in the back three rows of the aircraft. Indeed, these are the best seats in the aircraft for ensuring that you don't have to climb over someone and no one will climb over you. And, there's a very large storage bin on the window side of these seats, ensuring these passengers shouldn't have to fight for the overhead bin:

That said, there are some important things to note about these seats. For each of the six seats, the seat is set toward the aisle rather than on the window. It's arranged this way so that these seats can be accessed by those with limited mobility, but it means that you won't get a great view out of the window. Also, this means that you might be bumped by passengers going up and down the aisle.

The other thing to note: there's a bathroom right behind 42H. The loud vacuum flushing coming from the bathroom might disturb your sleep during flight. Because of this, I'd recommend choosing seats 40C-42C instead. In the space where the lavatory is on the H-side of the cabin, there's a cabinet. And no, the crew assures me, this isn't the corpse cupboard that was on the old Singapore Airlines Airbus A340-500 previously used on this route.

If you're looking for more legroom than the standard 38-inch pitch allows, these rear seats aren't going to provide it. Instead, you'll want to look to row 31. Specifically, the emergency exit row seats 31A, 31C, 31H and 31K.

The dark horse for the best seats in the cabin are the emergency exit window seats 31A and 31K. Although they aren't marked as "extra legroom" seats on Singapore Airlines' seat map, they don't suffer the same legroom issues found in some emergency exit rows. The emergency exit slide is likely out of reach for even the longest legs. Plus, these seats are set so far back that you actually have a window.

The last seat choice tip is a general one: pick one behind an empty seat. The pitch is solid at 38 inches, but this is squeezed when the passenger in front of you reclines. Thankfully, the seat is designed to shift forward when you recline — lessening the amount of space that you take up in the seat behind you. But, every little bit of space helps. So, if you're out of other good options, you'll at least want to pick a seat with an empty seat in front of it.

From my experience, there are two clear winners for the worst seats in the cabin: 43F and 43G. Seat 43G is set right across the aisle from one of the rear lavatories, meaning there's going to be plenty of commotion from passengers going in and out of the bathroom. 43F is almost as close while also being a middle seat.

While the back of the cabin has to deal with lavatories and noise from the galley, the front of the cabin isn't the oasis that it might seem on the seat map. The cabin's only baby bassinets are in row 31. And — as learned the hard way — babies don't care for 18-hour flights. While the whole cabin got to hear the screams on my flight, those sitting in row 32 got a front-row seat — without getting the benefits of extra legroom. If you're sensitive to noise, you might want to avoid the first few rows of the cabin.

Singapore’s Airbus A350-900ULR will operate all of the airline’s nonstop flights to Newark and Los Angeles, and select flights to San Francisco. Flights include:

Saver awards on the Newark flight cost 70,000 miles each way. The Los Angeles and San Francisco routes are slightly cheaper at 65,000 miles each way. Since there's no economy cabin, you don't have the option to book economy and upgrade into premium economy.

At the time I booked the first flight, it made sense to redeem 70,000 miles instead of paying $2,000+ for the cash price. However, a round-trip cash fare on the nonstop now costs less than $1,500 — meaning it's not a great use of your miles.

Perhaps for this reason, Singapore Airlines is including these routes in its "Spontaneous Escapes" discount program. Currently, you can book flights for November for just 40,000 miles each way on the SIN-EWR route and 38,000 miles each way on the SIN-LAX and SIN-SFO routes. While this still isn't going to get you solid value if you're booking a round-trip, you'll get more than two cents per mile off a one-way booking.

Most partner programs don’t offer awards in Singapore’s newer premium cabins — to book a seat there, your best bet is to ticket your flight through SQ’s own KrisFlyer program. Fortunately, it’s easy to boost your KrisFlyer balance, thanks to partnerships with the three major transferable-points currencies, including: