Articles
Ethan Steinberg has been a frequent flier for as long as he can remember. He went from studying abroad in Paris to moving to Shanghai after graduating college, where he covered all things travel in the Asia-Pacific region for TPG.
Nov. 21, 2018
•
9 min read 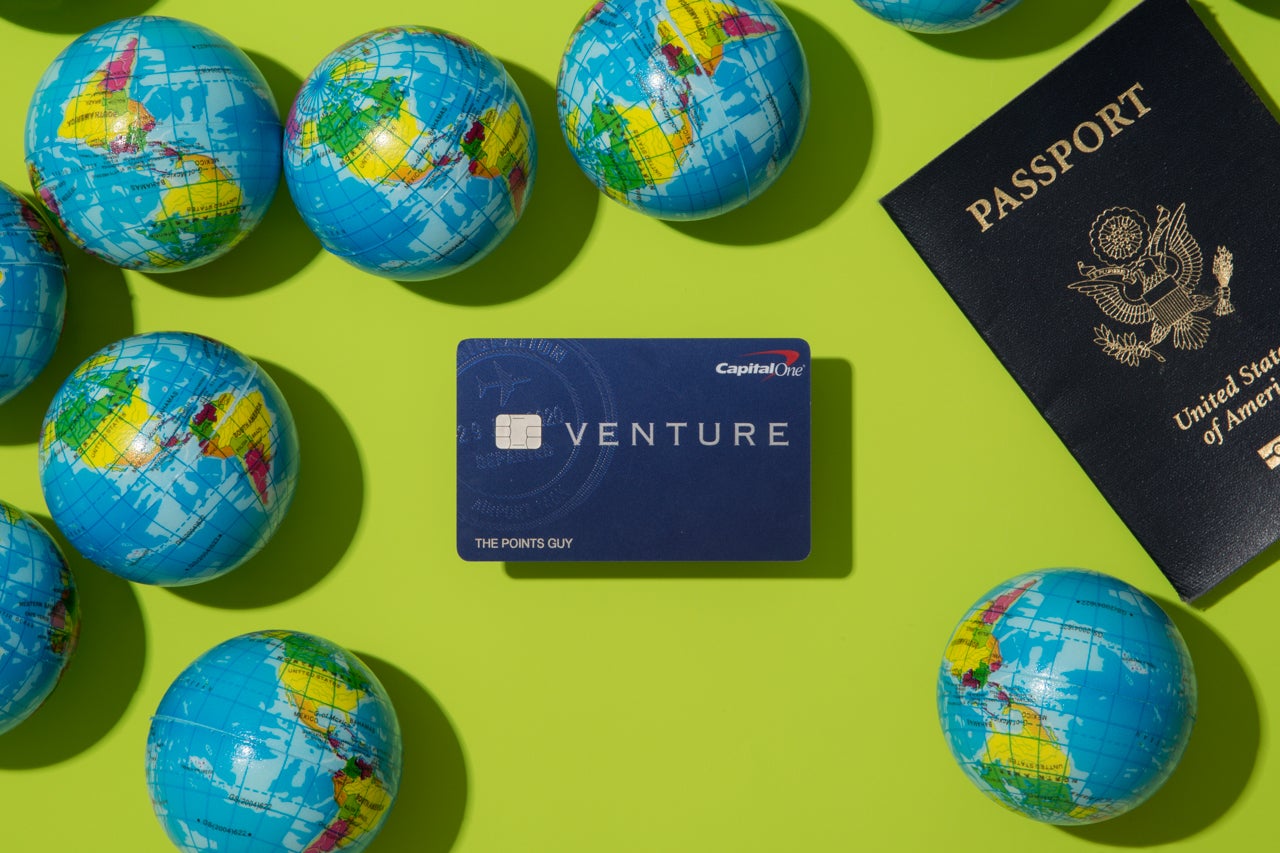 The Capital One Venture Rewards Credit Card has long been one of the most underrated cards on the market, offering a consistent 2x earning rate and a strong sign-up bonus. Capital One recently announced an incredibly valuable improvement that will absolutely transform the way Venture cardholders redeem their rewards.

Beginning in December, in addition to the fixed-value purchase eraser feature, Venture miles can be transferred at a 2:1.5 ratio to the following 12 airlines:

While there are plenty of exciting options in this list, most of these are hidden gems and not the well known loyalty programs that most travelers are familiar with (like American AAdvantage or United Mileage Plus, for example). This lack of familiarity with the transfer partners made it quite challenging to value these newly transferable Venture miles, though TPG ultimately landed on 1.4 cents per mile.

The TPG team almost unanimously agreed that this value comes mainly from the top programs, like Avianca LifeMiles. To celebrate these exciting changes to the card, Capital One is offering new applicants a limited time sign-up bonus of 75,000 miles after spending $5,000 in the first three months. Since the Venture card will continue to earn 2x miles per dollar spent, this means that you'll end up with 85,000 Venture miles, or about 64,000 airline miles, after completing minimum spend. Today we'll take a look at the best ways to redeem this bonus by transferring to Star Alliance loyalty program Avianca LifeMiles.

While there are plenty of options for booking Star Alliance awards to Europe, there are pros and cons to each choice. United charges too many miles for partner awards, while Aeroplan passes on hundreds of dollars in fees on certain partners such as Lufthansa.

Not only is LifeMiles a happy medium - reasonable mileage costs and no fuel surcharges - but the 64,000 LifeMiles you'll earn from the Venture Rewards sign-up bonus is enough to cover a one-way business class flight to Europe.

Unlike some other programs, LifeMiles also clearly shows you how many seats are left for a given flight (four, in the above example) which can help you decide if you should book right away or if you can afford to wait a bit.

You also have the option to mix and match miles or cash. If you max out the cash you spend, you'd be saving 37,000 miles at a cost of $581, or 1.57 cents per mile. This might be a good deal as TPG values LifeMiles at 1.7 cents each, but LifeMiles often sells miles as cheap as 1.35-1.4 cents each, so you should consider that first.

One quirk to be aware of with LifeMiles (which we'll dig deeper into in the next section) is that it uses more award zones than any other program I've seen. The US and Europe are each split into three separate zones, and while that doesn't have much of a bearing for awards on Star Alliance partners like Lufthansa or Swiss, it could help you save on certain United awards. Flights between "US 1" and "Europe 1" only cost 60,000 miles each way in business class. US 1 includes two United hubs - Washington Dulles (IAD) and Newark (EWR) - so if you're flying from the East Coast to Europe 1 you night be able to save 3,000 miles.

While Avianca's award zones for US 1 (shown above) and US 3 roughly correspond to the east and west coast, respectively, the US 2 zone is a bit of an eclectic mix.

The pricing schemes are also a bit convoluted, but follow the table below. All prices are one way:

So what can you do with the Capital One Venture Rewards Card in your wallet? If you're traveling within a single zone, your 64,000 LifeMiles sign-up bonus would be good for just over four round trip tickets within the US. Zone 2 will probably give you the most bang for your buck here, as you can fly from Miami (MIA) to Chicago (ORD) for only 7,500 miles each way, or even all the way to Montana if you're trying to stretch your flying time.

If you're looking to travel up front, 15,000 miles for domestic first class on shorter flights is a steal compared to the 25,000 miles United will charge you, and you can redeem your Venture sign-up bonus for two round trip tickets in domestic first.

Another option would be flying United's premium transcontinental routes which feature elevated service and often a better seat as well. Currently United operates premium service between Newark and Los Angeles (LAX) and San Francisco (SFO), as well as between Boston (BOS) and SFO. While United charges a 10,000 mile premium for these redemptions, bringing your one-way cost up to 35,000 United MileagePlus miles, Avianca does not differentiate these routes. This means that if you're able to find award space, you can book them for 25,000 LifeMiles each way. Your Venture sign-up bonus will give you enough for a transcontinental round trip first class ticket, and you'll still have almost 14,000 miles left over.

With flights from Tokyo (NRT) to Honolulu (HNL) covering 30% less distance than flights from Tokyo to the west coast, it's nice to see Avianca recognize the need to price Hawaii separately. In fact, Avianca applies almost exactly a 30% discount to premium cabin awards from Hawaii to North Asia. Specifically, a one way business class ticket will cost you 48,000 miles and a one way first class ticket will cost you 66,000 miles, as opposed to 75,000 and 90,000 miles respectively from the west coast.

This might not seem especially exciting on its own, but avgeeks take note: when ANA takes delivery of its first A380 in 2019, those beautiful whale jets will be used to fly exclusively to Hawaii. With no fuel surcharges, Avianca LifeMiles might be your best way to book this unique route.

There's a really powerful feeling of freedom that comes with having a large stash of points. If I wanted to, I could be on a plane to anywhere in the world tomorrow without having to worry about cost. And so can you, if you take advantage of this generous Venture sign-up bonus.

The most expensive one-way economy ticket you'll find (departing the US) is 42,500 miles one way to the Middle East, North Africa, or Central Asia. Plenty of other faraway places cost even less than that, such as "others" (Australia, New Zealand and Oceania) for 40,000 miles or South Asia for only 39,000. While you'll be just short of a round-trip ticket, the Venture Rewards card is an attractive option for everyday spending thanks to its 2x earning (which transfers to 1.5x LifeMiles) so it shouldn't be hard to make up the difference.

LifeMiles pricing is incredibly reasonable across the board. While not every route is a brag-worthy deal of the year, there aren't many places to complain either (except when it comes to Avianca's customer service, but I'll save that rant for another day). When you're ready to redeem the 64,000 miles from your Venture sign-up bonus, you might find some great options for flights outside the US.

While Australia is a bucket list destination for many people, finding award space can be challenging even if you have all the right miles at your disposal. When great work around is to break your trip into two parts, flying first to Asia, and then on to Sydney (SYD) on a separate ticket. LifeMiles offers very reasonable award rates for flights from North Asia to Austraia (or New Zealand or Oceania), with business class tickets costing 40,000 miles and first class tickets costing 50,000. You have a few options here, including ANA's 787 business class, or Asiana's A380 first class from Seoul to Sydney.

Avianca LifeMiles is not going to hand you the perfect redemption on a silver platter, it will take a little bit of work to understand this program and use it well. But with the 75,000 mile sign-up bonus from the Capital One Venture Rewards Card, there are plenty of great options on the table for you to pick from. Whether it's a premium cabin trip to Europe or a ton of domestic flying around the US, Capital One is making a strong case for your business with the addition of the airline transfer partners.